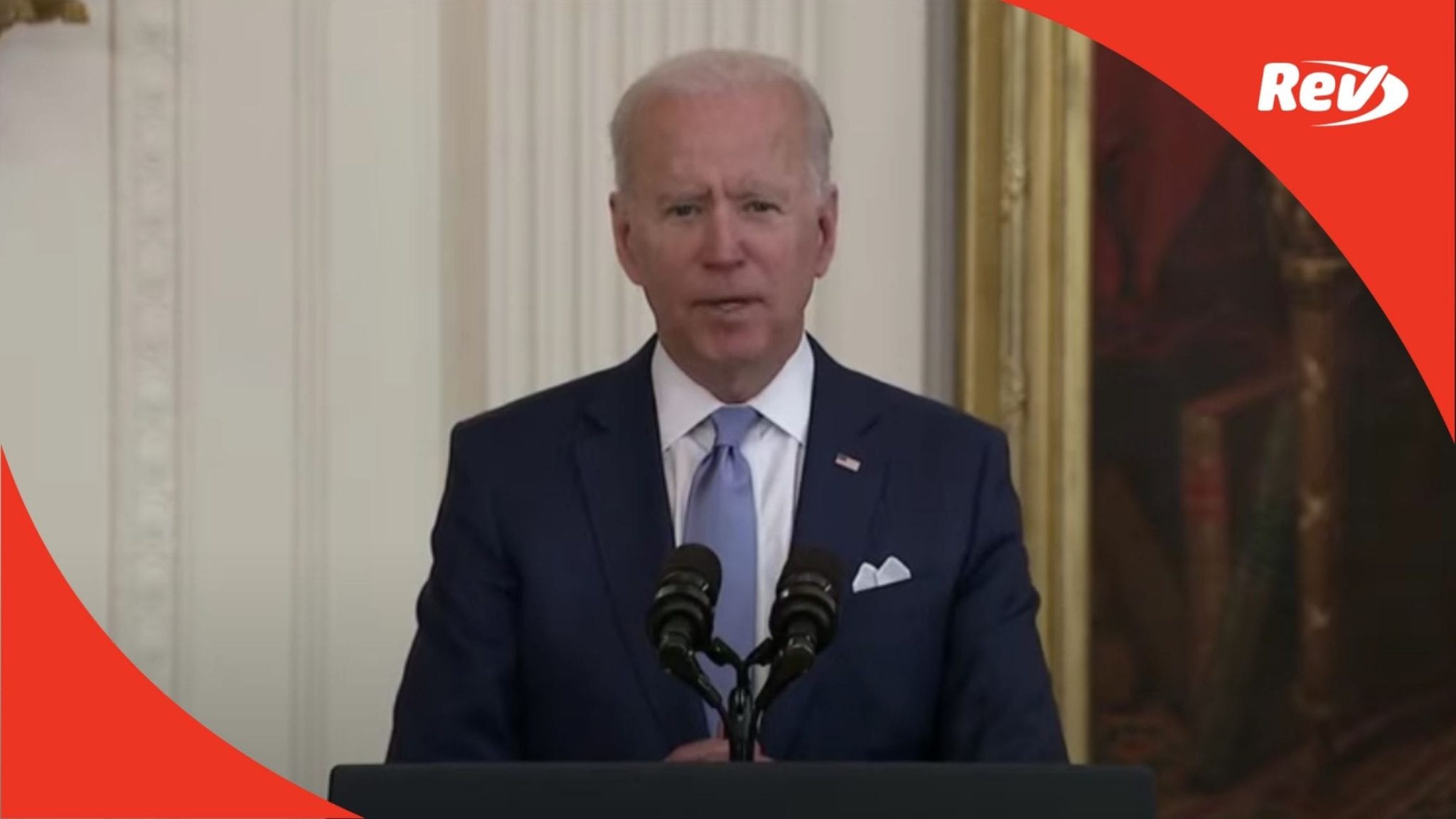 President Joe Biden awarded the Medal of Honor to Army Colonel Ralph Puckett on May 21, 2021. Read the transcript of his speech remarks here.

Joe Biden: (00:00)
… and welcome to the White House. President Moon, it’s a real honor to have you here participating in this ceremony today. The strength of the alliance between the United States and the Republic of Korea was born out of the courage, determination, sacrifice and of the Korean troops fighting shoulder to shoulder with American troops. And having you here today is an important recognition of all that our nation has achieved together, both of them, in the decade since. And I’m joined by my wife, Jill, who is as excited about this event as I am. And the vice-president and the second gentlemen are here as well. Our secretary of defense, vice chairman of the joint chiefs of staff, the officials of the United States Army, as well as several members of Congress, Representatives Ferguson, Representative Crow, and Senator Ernst.

Joe Biden: (00:53)
Because, today we are hosting a true American hero and awarding an honor that is long overdue, more than 70 years overdue. Seventy years ago on a frozen hilltop deep in what is now North Korea, a young first lieutenant bravely, out of West Point and barely out of West Point, acted with bravery that earned him the Distinguished Service Cross, the military’s second highest honor. Today, after more than a decade of effort, including support from my good friend John McCain, God rest his soul, shortly before he passed away.

Joe Biden: (01:33)
I’m incredibly proud to give Colonel Ralph Puckett’s act of valor, the full recognition they have always deserved. Colonel, I’m humbled to have you here today, I really am, along with your loving family and to award you the medal of honor. And though I understand that your first response to us hosting this event was to ask, “Why all the fuss?” Why all the fuss, can’t they just mail it to me?” I was going to make a joke about the post office, but decided not to do that.

Joe Biden: (02:11)
Colonel Puckett, after 70 years, rather than mail it, I would have walked it to you. You know, your lifetime of service to our nation I think deserves a little bit of fuss, a little bit of fuss. You know, when I called to tell the Colonel that I had approved this award, I also spoke to Jeanie. Excuse me for using your first name, but that was my mom’s name too. And you and my mom have the same eyes, although you’re much too young to be my mom. And Jeanie, they’ve been married for 68 years. We have one thing in common, we both married way up. We both married way up.

Joe Biden: (02:55)
That’s exactly right. Well, Jeanie and Ralph actually met while he was recovering from his wounds. There were married two years to the day after the battle that we’re recognizing him today for his bravery. By the way, y’all can sit down I think. It just dawned on me. I understand why you’re standing. I’d be standing too, but. Jeanie, it’s wonderful to welcome you. I mean that from the bottom of my heart.

Joe Biden: (03:26)
Jill and I know firsthand that it’s not just the person who wears the uniform who serves, military families make enormous sacrifices for our nation. So let me add our thanks to you and your life of service, as well. I told you earlier that expression by the poet, “They also serve only stand and wait.” And you wait a long, long time under many, many, many circumstances. And that goes to the entire family. Marty and her husband, Anthony. Thomas and partner Chip, I don’t know if they’re here, I didn’t see them yet. And I know the other daughter that Jeannie isn’t with us anymore. Just like I wish our son Beau were able to be here to see this, he’s not with us either. She’s here in spirit and represented by her family. And I know she’s always in your heart Colonel, and never leaves.

Joe Biden: (04:19)
I also want to recognize Master Sgt. Merle Simpson who fought beside the Colonel in Korea. Where are you? Stand up, sir. Come on. [inaudible 00:04:31] Who made the trip to Washington today to represent all of their fallen brothers in the Eighth Army Ranger Company. It’s an honor for all of their members, as well. Hill 205 was just 60 miles from the border with China and then Lieutenant Puckett and the Rangers had their orders to take that hill. As a young officer, Lieutenant Puckett knew that something wasn’t quite right. The intelligence briefing indicated that there were 25,000 Chinese troops in the area, outnumbering US and Korean forces 3-2.

Joe Biden: (05:30)
And Lieutenant Puckett thought the numbers for the attack didn’t align with the basic military doctrine. Lieutenant believed in the fundamentals. It was how he trained his men, it’s how he’d hand picked them. Chosen from the ranks of cooks and clerks and mechanics to the first ranger company since World War II. Physical conditioning, tactical training, working as a team, get the basics right then build from there.

Joe Biden: (06:33)
So, on the morning of November 25th, 1950, mounted on the decks of the tanks, 51 of Puckett’s Rangers and nine Korean enlisted soldiers set out to take Hill 205. To make their charge, they had to cross about a half a mile of frozen rice patties under fire. And when the enemy machine gunners slowed, the Rangers advanced, Puckett risked his life by running across the area to draw a fire that would reveal the location of the nest. He did it once, he did it again, it took three runs, intentionally exposing himself to the enemy to pick off the gunner.

Joe Biden: (07:16)
Of course, Colonel Puckett had developed a dangerous hobby, as he recounted in his book, of challenged himself to run in front of speeding cars when he was four years old. [inaudible 00:07:31] So self-preservation, it seemed, was never a primary concern of the Colonel. When the Rangers has finally reached the top of Hill 205, they found it abandoned. But Puckett knew the fight wasn’t nearly over.

Joe Biden: (07:48)
His men established a defensive perimeter and then went to coordinate the artillery support he was sure they would need, and while he was there, to load up the ammunition and grenades, the basics. Shortly after he returned, the first onslaught began. Mortars followed by a ground assault from the entire Chinese battalion. Puckett’s rangers were out-numbered almost 10-1. During the fight, Puckett abandoned the relative safety of his foxhole, moving from man to man encouraging them in the fight, checking that the perimeter was holding. He took a grenade fragment and his left thigh, but Puckett refused to be evacuated. He was a Ranger, he led his man from the front. And over the course of the next several hours, four more waves of assaults came.

Joe Biden: (08:41)
Each time, Puckett made his rounds, passing out extra ammo and extra encouragement to rally his men. Each time, he was able to call in artillery support, sometimes danger close, to help break the advance of the Chinese soldiers. Each time, the Rangers held the hill, pushing the enemy back at times with hand-to-hand fighting. About 2:30 AM, after more than four hours of near nonstop fighting, the sixth wave began.

Joe Biden: (09:14)
By this time, many Rangers had been killed, and those who were left were exhausted, outnumbered and dangerously short of ammunition and grenades. Lieutenant Puckett has sustained a second wound, this time in his left shoulder. He had distributed all the ammo to his men, keeping only eight bullets and a bayonet for himself. For the last time, Puckett called in artillery support only to be told that the guns were supporting other besieged units.

Joe Biden: (09:45)
Then, two mortar rounds landed directly in Puckett’s foxhole, tearing through both his feet and his backside and his left arm and shoulder. Puckett’s Rangers had been overwhelmed and he himself was badly wounded. He ordered one of his men who found him on the ground to leave him behind. But that’s not the Ranger Creed. The private ran for help, and soon two other Rangers charged back up the hill fighting off advancing Chinese soldiers, retrieving their commander. They had to drag him down the hill, with Lieutenant Puckett reminding them and himself that he could take the pain quote, “I’m a Ranger.”

Joe Biden: (10:31)
Before his men loaded him on a tank to evacuate, Lieutenant Puckett called for one final barrage on Hill 205. And the Eighth Army unloaded artillery and phosphorus on the Ranger’s former position. They did not hold the hill, but the Rangers extracted a high price.

Joe Biden: (10:52)
Korea is sometimes called the forgotten war, but those men who were there under Lieutenant Puckett’s command, they’ll never forget his bravery. They never forget that he was right by their side throughout every minute of it. And the people in the Republic of Korea haven’t forgotten as evidenced by the fact that the Prime Minister of Korea is here for this ceremony. I doubt that this has ever happened before. I can’t say that for certain, but I doubt that it’s happened before.

Joe Biden: (11:22)
The Americans, all Americans like Ralph Puckett, joined in their fight. And while the enduring partnership between our two nations began in war, it has flourished through peace. It’s a testimony, I think, of the extraordinary strength of our alliance.