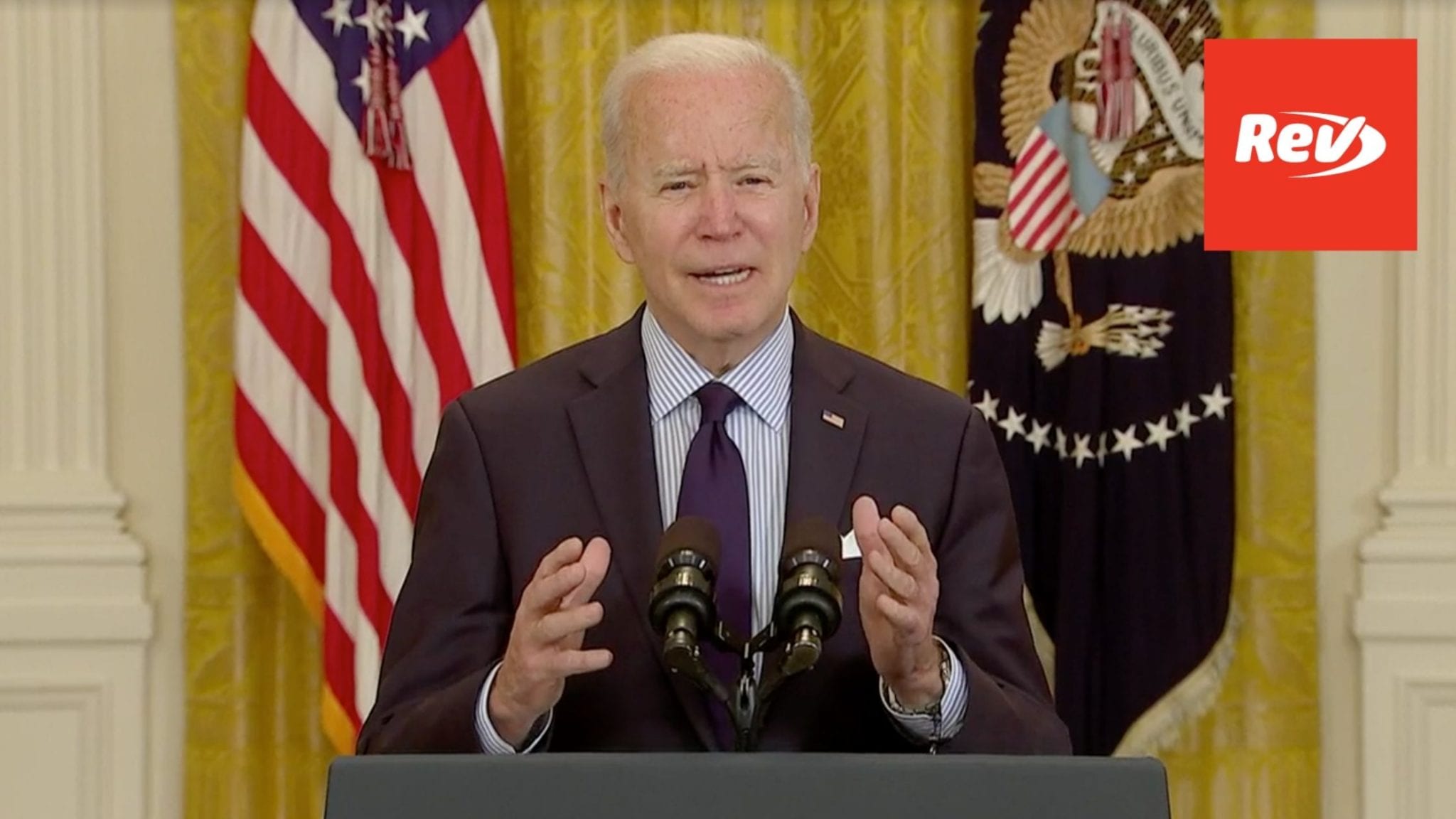 President Joe Biden gave remarks on the April Jobs Report on May 7, 2021. Employers added only 266,000 new jobs in April, a number far below expectations. Read the transcript of Biden’s speech briefing here.

President Biden: (00:02)
I want to put today’s jobs report in perspective, and, look, we came to office, we knew we were facing a once in a century pandemic, and a once in a generation economic crisis. And we knew this wouldn’t be a sprint, it’d be a marathon. Quite frankly, we’re moving more rapidly than I thought we would. This morning we learned that our economy created 266,000 jobs in April, hadn’t been adjusted again yet, but that’s what it says, 266. And listening to commentators today, as I was getting dressed, you might think that we should be disappointed. But when we passed the American Rescue Plan, I want to remind everybody, it was designed to help us over the course of a year, not 60 days. A year. We never thought that after the first 50 or 60 days everything would be fine.

President Biden: (01:01)
Today, there’s more evidence that our economy is moving in the right direction. But it’s clear we have a long way to go. All told, our economy has added more than 1,500,000 new jobs since I took office. That’s the most number of jobs created in the first three months of any presidency in our history. Just for perspective, in these three months before I got here, the economy added about 60,000 jobs a month, not half a million. In the three months since I’ve been here, the economy has added 500,000 jobs per month. This is progress, and it’s a testament to our new strategy of growing this economy from the bottom up, and the middle out. It’s a clear testament to why it’s so needed.

President Biden: (01:49)
Some critic said that we didn’t need the American Rescue Plan. That this economy would just heal itself. Today’s report, just underscores in my view, how vital the actions we’re taking are. Checks to people who are hurting, support for small businesses, for childcare and school reopening, support to help families put food on the table. Our efforts are starting to work, but the climb is steep, and we still have a long way to go.

President Biden: (02:20)
Today’s report also puts some truth to some loose talk that we’ve been hearing about the economy lately. First, that we should stop helping workers and families out for fear of overheating the economy. This report reinforces the real truth. For years, working people and middle class people, people who built this country, have been left out in the cold, struggling just to keep their heads above water, while those at the top have done very well. We’re still digging out of an economic collapse, that cost us 22 million jobs. Let me say that again, it cost us 22 million jobs. When we came in, we inherited a year of profound economic crisis and mismanagement on the virus. And what we proposed is going to work. We’re going to get to 70%.

President Biden: (03:18)
But, look, it’s also going to take focus, commitment, and time to get the economy moving again, as we want it to move. We’ve got work to do, and to state the obvious, we have work to do. But look, let’s keep our eye on the ball. That’s why the American Rescue Plan is so important.

President Biden: (03:38)
I said we’d build it as a year long effort to rescue our country. It’s already working, eight weeks later, after it was passed. But parts of the bill are still getting underway. Here’s one example; I know you all know this, but it’s worth repeating. State and local governments have to balance their budgets. As a consequence of this pandemic, revenues are way down in cities and states. State and local governments had to lay off 1.6 million employees. That’s an awful lot of firefighters, police officers, sanitation workers, essential workers. But later this month, we’re going to be distributing the first traunch of the state local assistance from the American Rescue Plan.

President Biden: (04:28)
We won’t get all 1.6 million of those jobs back in one month, but you’re going to start seeing those jobs and state and local workers coming back, starting this month. We will also deliver assistance to tens of thousands, and I notice every Republicans in their home state talking about this being a good idea, tens of thousands of restaurants and bars across the country. And by the way, the majority of the jobs that have come back have been in those industries. And so we’re going to help schools and children, and child centers across the country as well, accelerate reopening and that’s underway. Look, this is going to continue to improve, today’s report makes clear. Thank goodness we passed the American Rescue Plan. Help is here, and more help is on the way, and more help is needed.

President Biden: (05:23)
Second, today’s report is rebuttal. The loose talk that Americans just don’t want to work. I know some employers are having trouble filling jobs, but what this report shows is that there’s a much bigger problem. Notwithstanding in the commentary you might have heard this morning. It is that our economy still has eight million fewer jobs than when this pandemic started. The data shows that more workers, more workers are looking for jobs, and many can’t find them. Well, jobs are coming back, there’s still millions of people out there looking for work.

President Biden: (06:06)
And the idea that they don’t want to work, most middle class, working class people that I know, think the way my dad did. He used to say, and I know I’m repeating myself, but I’m going to continue to because I think it’s critical, “A job is a lot more than a paycheck,” he’d say, “Joey, it’s about your respect, your dignity, your place in the community.” More than a paycheck, it’s peoples pride, it’s about being able to look your child in the eye and say, “Honey, it’s going to be okay.” I’ve never forgotten that. I’ve never forgotten those folks I grew up with. I think about them every day as president. They didn’t have a lot of money, but they busted their necks, their whole lives, to take care of their families. And all they ever wanted was a shot, a fair shot of making it.

President Biden: (06:51)
Last month, there were 266,000 more Americans with dignity that comes for the job. And there are millions, millions of Americans out there, who through no fault of their own, have been knocked flat on their back this past year. The virus stole their jobs. I’m determined to give them a fighting chance. That’s why I’ve been so focused on vaccinating the nation, and getting our economy running again. That’s why we fought so hard to pass the American Rescue Plan. And again, the American Rescue Plan was for the whole year, it plays out over a year. And it’s working. But we can’t let up. This jobs report makes that clear. We’ve got too much work to do.

President Biden: (07:37)
And the American Recuse Plan is just that, a rescue plan. It’s to get us back to where we were. But that’s not nearly enough, we have to build back better. That’s why we need the American Jobs Plan I proposed. To put us in a position, where we can build back better, to reclaim our position as the leading and most innovative nation in the world, and win the future, the 21st century.

President Biden: (08:04)
We need to rebuild the nations roads, and highways, and bridges, and port, and airports. We’ve got water systems all over the country that need repair. There are over 400,000 schools and daycare centers with lead pipes where the water goes through, 10 million homes. I saw a water for project system yesterday in New Orleans, that was over 80 years old. It’s in need of major, major overhaul. And by the way, if they don’t get it fixed, New Orleans itself is in real trouble. They need reliable, affordable high speed internet throughout this country.

President Biden: (08:46)
Our businesses need to compete worldwide. Our rural communities need to be able to compete and make their own judgements as to when to buy and sell. Our kids need to succeed in school. As my wife Jill says, “Any nation that out educates us is going to out compete us.”

President Biden: (09:03)
We also need to up our game in our education system. 12 years of education in 2021 is not enough to compete in 21st century. In my view, we need 16 years of public education guaranteed. In this country, from preschool for three and four year olds at the early end, to two years at community college after high school. We have some serious decisions to make. And fundamental choices. And think about it. How much better off is the country if we had tens of thousands of graduating seniors from high school, and beyond, going to get two years of community college? Doesn’t that increase our capacity significantly?

President Biden: (10:24)
I call my plan the Blue Collar Blueprint for America. That’s exactly what it is. Let’s not let up. We’re still digging our way out of a very deep hole we were put in. No one should underestimate how tough this battle is. We still have a job to do here in Washington. The American people are counting on us. Let’s get it done. Let’s build an economy that delivers dignity, and gives everybody a chance. I’m confident we can do this, because there’s nothing beyond the capacity of the American people. I want to thank you, and God bless you, and may God protect our troops. Thank you very much.

Speaker 1: (11:04)
President, do you believe enhanced unemployment benefits had any affect on diminishing a return to work in some categories?

Speaker 2: (11:18)
[inaudible 00:11:18] you walked up to the podium with your mask on. Why do you choose to wear a mask so often, when you’re vaccinated, and you’re around other people who are vaccinated?

President Biden: (11:26)
Because I’m worried about you. No, that’s a joke. It’s a joke. Why am I wearing the mask? Because when we’re inside, it’s still good policy to wear the mask. That’s why. When I’m outside… and the problem is, lots of times I walk away from this podium and you notice I forget to put my mask back on, because I’m used to not wearing it outside.

Speaker 3: (11:45)
Mr. President, are you at all concerned about Vladimir Putin amassing troops on the border of Ukraine? Do you see that as a message to you? And could it impact your desire to have a one-on-one meeting with him?

President Biden: (11:58)
It does not impact in my desire to have a one-on-one meeting, and do you notice he had more troops before? He’s withdrawn troops. They’re still troops en masse, but significantly less than he had a month ago.

President Biden: (12:16)
Yes, but how serious, and what they’re prepared to do is a different story. But we’re still talking. Sir, you had a question, I cut you off.

Speaker 5: (12:23)
Do you have any update on whether you’ll be able to meet Vladimir Putin in June? Is that going to happen?