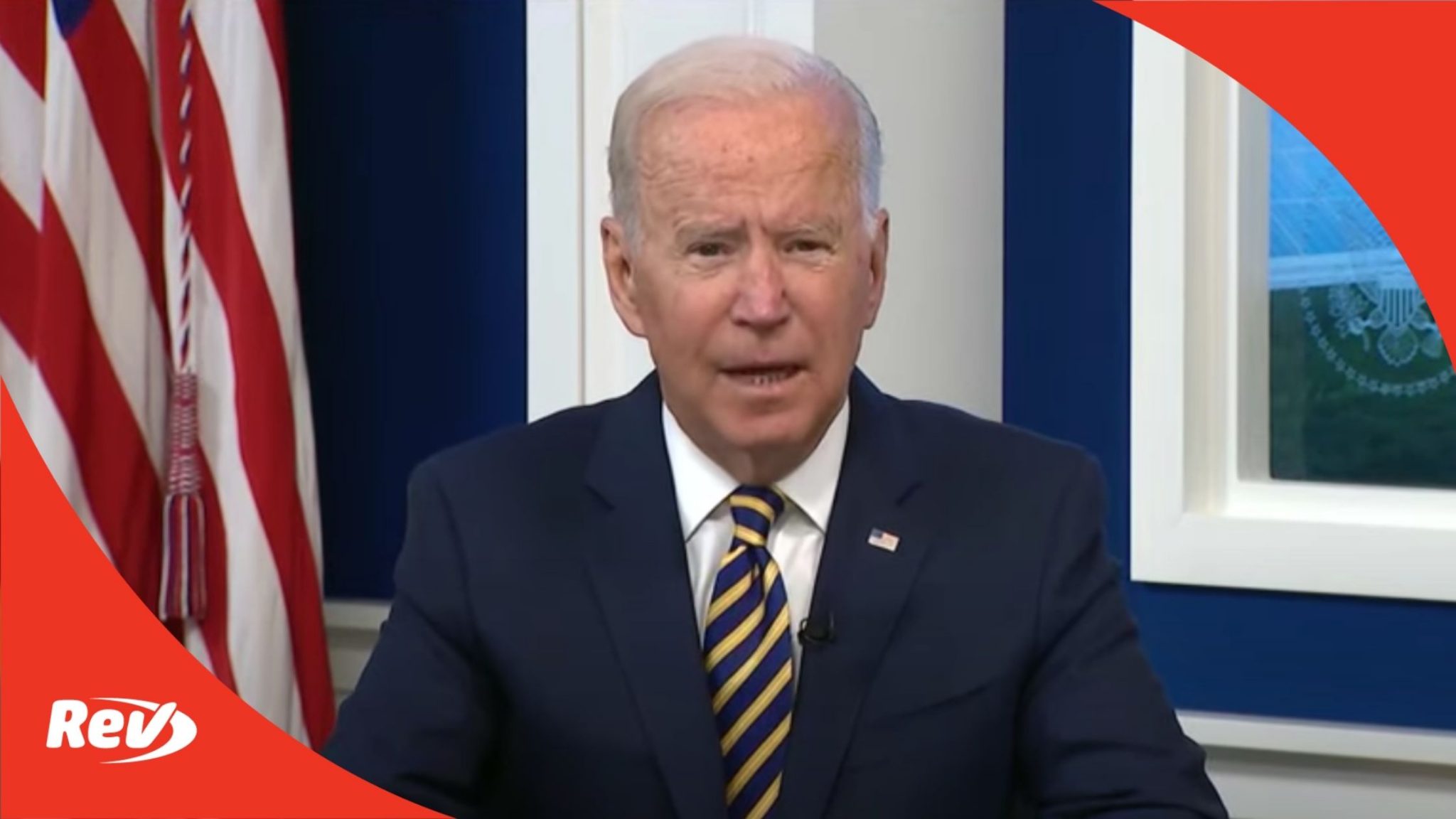 President Joe Biden and Secretary of State Antony Blinken hosted a virtual climate and energy summit on September 17, 2021. They spoke about strengthening the “collective response to the climate crisis.” Read the transcript of the speech briefing here.

Secretary Blinken: (00:00)
Good morning everyone, and thank you very much for joining us today. Our purpose, as you know, is to strengthen our collective response to the climate crisis. No challenge will have a more significant impact on the world or require a greater level of international cooperation, and no challenge ranks higher on a list of global priorities for this administration. Since we convened this group in April at the Leaders’ Summit, the international scientific community has issued a stark warning. Last month, the Intergovernmental Panel on Climate Change, in a report that all our governments reviewed and embraced, presented the irrefutable evidence of the crisis now upon us.

Secretary Blinken: (01:00)
As context for our discussion today, I just wanted to highlight a few key findings. First, the report included important measures of how we’re already altered our climate. There’s more carbon dioxide in the atmosphere today than there has been in two million years. As a result, the planet is warming rapidly. As we strive to limit global warming to 1.5 degrees Celsius above pre-industrial levels, we now know that we have already seen temperatures rise 1.1 degrees Celsius. Second, the report looked at how this is already affecting life on Earth. Every area of the planet is now impacted by climate change. Many of the extraordinary weather events we’ve recently experienced would have been, and I quote, “Virtually impossible without human-induced warming.”

Secretary Blinken: (01:50)
Finally, we know what’s needed now. To keep warming below 1.5 degrees Celsius over the long term emissions must fall rapidly this decade, and they must reach net zero around 2050. The good news is this, according to the IPCC, if we do what’s required global temperatures will stabilize in just a couple of decades. We can avert the worst potential consequences of the crisis. That’s our charge now. The science is clear and it’s up to the countries assembled here today to lead a decisive global response. With that, it’s now my honor to introduce the President of the United States, Joe Biden.

President Biden: (02:33)
It’s good to see you all. Good morning. Thank you Secretary Blinken, and a special thanks to Special Envoy Kerry. John’s been a friend for a long time, and I have absolute trust in his leadership on this issue. We’re honored to host all of you today as a follow-up to the Leaders’ Summit on the climate we hosted back in April. That summit made good on a commitment that I made to the American people, that the United States would return immediately to the world stage and address the climate crisis. I wanted to show that we’re at an inflection point, and that there’s a real consensus, a real consensus, that while the climate crisis poses an existential threat there is a silver lining.

President Biden: (03:16)
The climate crisis also presents real and incredible economic opportunities to create jobs and lift up the standard of living for people around the world. And I want to thank you and your efforts so far, and I need to tell you the consequences of inaction. But you all actually know it. It’s somewhat presumptuous of me to say this, but over the last two weeks I’ve traveled across the United States to see the damage and destruction from record hurricanes, record floods, and wildfires. China continues across … Excuse me. Climate continues to change across Europe, Africa, and Latin America, and you’ve endured massive flooding.

President Biden: (03:57)
Fires have raged across Australia, and the Amazon, and the Russian tundra. In Siberia, I found it almost unbelievable, temperatures reached 118 degrees. 118 degrees inside the Arctic Circle. The finding from a new Intergovernmental Panel on Climate Change represents a code red for humanity, and the time to act is really narrowing as the secretary just pointed out. If we get too close to a point of no return, we don’t have a lot of time. So we have to act. All of us, we have to act, and we have to act now. When we met in April, we agreed to strengthen our efforts as we had COP26 in Glasgow. Today I’ve called us together again to candidly assess our progress.

President Biden: (04:46)
I’m grateful to those of you who’ve strengthened your contributions under the Paris Climate Agreement and put forward ambitious targets for 2030. And thanks to your leadership, countries representing more than half of the global GDP are committed to taking steps that will keep us within reach of our joint pursuit of limiting warming to 1.5 degrees Celsius. But we know there’s still a lot of work to do. And if anything our job, is my view, has grown more urgent. The countries representing the Major Economies Forum account for 80% of global emissions. Without adequate commitments from every nation in this room, the goal of limiting warming to 1.5 degrees slips through our hands, and that’s a disaster.

President Biden: (05:32)
Here’s what I believe we have to do right now, and what we’re advancing here in the United States. We have to bring to Glasgow our highest possible ambitions. Those that have not yet done so, time is running out. For our part in America, I’m working to pass historic investment and to modernize our climate resilient infrastructure, to build a clean-energy future that creates millions of jobs and ushers in new industries in the future. As part of this work, the United States is committed to reduce greenhouse gas emissions between 50 and 52% below 2005 levels by the year 2030. And we set a goal that by 2025 our power sector will be free of carbon, and 2030 50% of the cars sold in the United States we believe should be, must be, electrical vehicles.

President Biden: (06:28)
A further step we’re working with the European Union and other partners to launch is a global methane pledge, to reduce global methane emissions by at least 30% below 2020 levels by 2030. This will not only rapidly reduce the rate of global warming, but it will also produce a very valuable side benefit like improving public health and agricultural output. We’re mobilizing support to help developing countries join and pledge to do something significant, pledge and seize this virtual opportunity. We’ve already taken big steps domestically to tackle these emissions and create good paying jobs introduced by plugging leaks and capping abandoned wells and gas wells.

President Biden: (07:18)
We believe the collective goal is both ambitious but realistic. And we urge you to join us in announcing this pledge at COP26. Now, we also have to make additional progress to support developing countries. At the Leaders’ Summit in April I announced the United States is working to double our climate finance, triple our support for adaptation by 2024 for developing nations. And I can assure you that we’re looking for ways to go even further toward meeting the collective goal of mobilizing a hundred billion dollars a year from the developing world and for them. Our emphasis this year is going to be on building ambition on the road to Glasgow. Glasgow is not our final destination.

President Biden: (08:10)
Whatever commitments we make at COP26, we must all resolve together in Glasgow to continue strengthening our ambition and our actions next year and throughout the decisive decade to keep us below 1.5 degrees, keep that within reach. That’s why this forum I believe is so important, and it was an important driver in the Paris Climate Agreement. We got to continue to play a vital role going forward. At this critical juncture, the start of a decisive decade, I can use this forum to forge a political momentum and consensus to drive concrete actions in four key spheres of energy, industry, land, the ocean.

President Biden: (08:57)
And I want to be clear, this forum will compliment not substitute for other forums. In fact, with respect to energy and industry, we will closely align our efforts with the work of the forums, like the Clean Energy Ministerial and the Mission Innovation, both of which I’m proud to say the United States will chair next year. A plan to kick off these efforts by bringing together ministers in January to discuss clean energy goals in power, transport, industry, building sector. We also want to focus on ocean initiatives in advance of our ocean conference next February. I plan to convene a leaders-level gathering so we can take stock of the collective progress we’ve made.

President Biden: (09:46)
In closing, and thank you for your patience, I want to again underscore both the urgency of this moment and the tremendous opportunity before us. I look forward to continuing this work together and hearing how you plan to contribute to the climate ambition the world so urgently needs. The time is now. The time is now. Thank you for your indulgence. I’m now going to turn this over to Special Envoy John Kerry. Thank you.

Special Envoy Kerry: (10:13)
Thank you Mr. President. Thank you for once again bringing leaders together to confront this profound crisis. As you’ve traveled our country in the past few days, Mr. President, visiting communities devastated by climate disasters, all of us have seen your tremendous commitment to rallying our nation and indeed the world to step up to this-