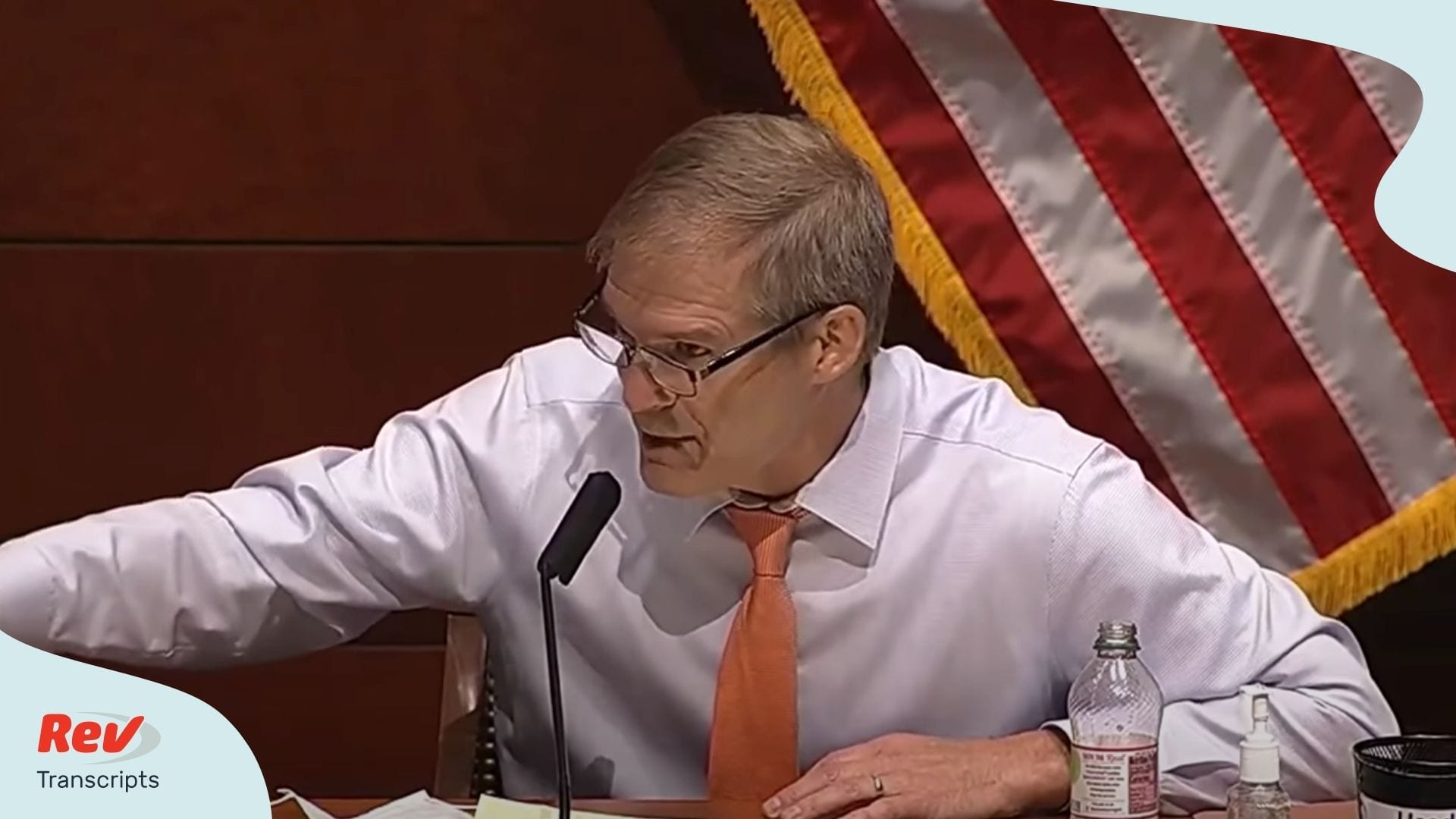 Representative Jim Jordan gave an opening statement at the Bill Barr testimony on July 28. Read the transcript of his statement here.

Jim Jordan: (00:00)
Spying. That one word. That’s why they’re after you, Mr. Attorney General, 15 months ago, April 10th, 2019 in a Senate hearing, you said this sentence, “I think spying on a political campaign is a big deal. Spying on a political campaign is a big deal.” It sure is. And since that day, since that day, when you had the courage to state the truth, they attack you. They’ve been attacking you every sense every day, every week for simply stating the truth that the Obama-Biden administration spied on the Trump campaign. One year ago, New York Times headline said this one year ago, “FBI sent investigator posing as assistant to meet with Trump aide in 2016, the FBI sent a young lady who used the name Azra Turk to meet Papadopoulos in September of 2016.” They sent someone pretending to be someone else to meet a person associated with the Trump campaign.

Jim Jordan: (00:54)
You know what they call that? You know what they call that? Spying. One month later, October, 2016, they used the dossier to spy on Carter Page, the salacious unverified dossier, Jim Comey’s words, not mine. They took it to the Pfizer Court. Didn’t tell the courts that the Clinton’s paid for it. Didn’t tell the court that the guy who wrote the document, Christopher Steele, had already communicated to the Justice Department, that he was “desperate to stop Trump from getting elected.” And guess what? There were 15 more lies that they told the court. 17 in total they’re outlined by the Inspector General each and every one of them in his 400 page report. But guess what? Chairman [inaudible 00:01:35] refuses to allow Mr. Horowitz to come here and testify and answer our questions about the 17 lies. The Obama-Biden administration told to the secret court, the Obama-Biden DOJ opened the investigation in July.

Jim Jordan: (01:49)
They use the secret agent lady to spy on Papadopoulos in August. They lied to the Pfizer Court in September, and they did all this without any basis for launching the investigation to begin with. How do we know that? How do we know there was no basis? They told us. Now they didn’t want to tell us, but thanks to Rick Grinnell who released the transcripts of their testimony, we now know there was no basis for them to start the investigation in the first place. Sally Yates, [inaudible 00:02:15], Samantha Power, Susan Rice, here’s what Susan Rice says, “I don’t recall intelligence. I would consider evidence of a conspiracy.” How about James clapper? “I never saw any direct evidence that the Trump campaign or someone in it was conspiring with the Russians to meddle with the election. Say that again, “I never saw evidence that the Trump campaign was conspiring,” and yet they investigate him.

Jim Jordan: (02:39)
There was never a proper predicate. So why’d they do it? There was no reason to do it. Why’d they do it? They told us that to Peter Strzok, August, 2016 asked, “Is Trump going to win?” What’s his response? Remember this is Peter Strzok, this guy who ran the investigation. “No. No, he’s not. We’ll stop it.” August, Peter Strzok says, “We’ll stop Trump.” September, they spiraled Papadopoulos. October, they use the fake dossier to lie to the court. But guess what happens in November? Guess what happens in November? November 8th, 2016, the American people get in their way, 63 million of them to be exact. Now, everything changes. Now the real focus is, wow, wait a minute, we didn’t stop him. He won. Now, what do they have to do? They have to do the coverup. And who do they have to go after? Who’s target number one in their coverup? The former head of the defense intelligence agency, the guy who’s about to become National Security Advisor to the President of the United States, Michael Flynn.

Jim Jordan: (03:42)
They can’t have him hanging around because he’ll figure it out. So they decide to go after Michael Flynn, three star general served our country for over three decades. And we know they went after him because they told us that too. Bill Priestap, head of counter-intelligence at the FBI, the day they interview Flynn, January 24th, 2017, his notes say what? “What’s our goal? To get Flynn to lie so we can prosecute him or to get him fired.” Think about what the Obama-Biden, DOJ, what their administration did in the last month, the last month they were in power. January 4th, the agents investigating Flynn want to drop the case. Comey tells him no. January 5th, they have the now famous meeting in the oval office. Obama, Biden, Rice, Comey, all of them are in there. They’re plotting their strategy how they’re going to get Flynn. January 6th, Comey goes up to Trump Tower, briefs President elect Trump on the dossier that they already know is false, just so they can leak it to the press and the press will write the story that they briefed the president on the dossier. And then of course, January 24th, the day they go set up Michael Flynn, set up Michael Flynn in his interview.

Jim Jordan: (04:50)
Guess what else they did? Guess what else they did between election day and inauguration day? That two months time and guess what else they did? 38 people, 49 times unmasked, Michael Flynn’s name, Comey, Clapper, Brendan, Biden, seven people at the Treasury Department unmasked Michael Flynn’s name for goodness sake. And of course, Flynn resigns on February 13th. Flynn resigns on February 13th, now the cover is complete. Flynn’s gone, everything’s fine they think. Until May 9th, 2017 when president Trump fires Jim Comey. Now they got a problem again. The guy who was going to keep it all quiet, he’s been fired. Now, how do they continue the coverup? Real simple. Jim Comey leaks his memos with the express purpose of getting a special counsel appointed to investigate something they already know is not true. And that’s exactly what happened. We get two years, 19 lawyers, 40 agents, 500 witnesses, 2800 subpoenas, and the 30 million cost to the taxpayer. And they come back with nothing, absolutely nothing.

Jim Jordan: (05:57)
And so all they got left is to attack the Attorney General, who had the courage to state the truth, right from the get go. The first time he testifies after he’s confirmed. You guys attack him every day, every week. And now you filed articles of impeachment against him. It’s ridiculous. He had the courage to do what no one else would do at the Justice Department. Sally Yates wouldn’t call it spying. Jeff Sessions wouldn’t do it. Rod Rosenstein wouldn’t do it. Chris Ray sure as heck isn’t going to do it.