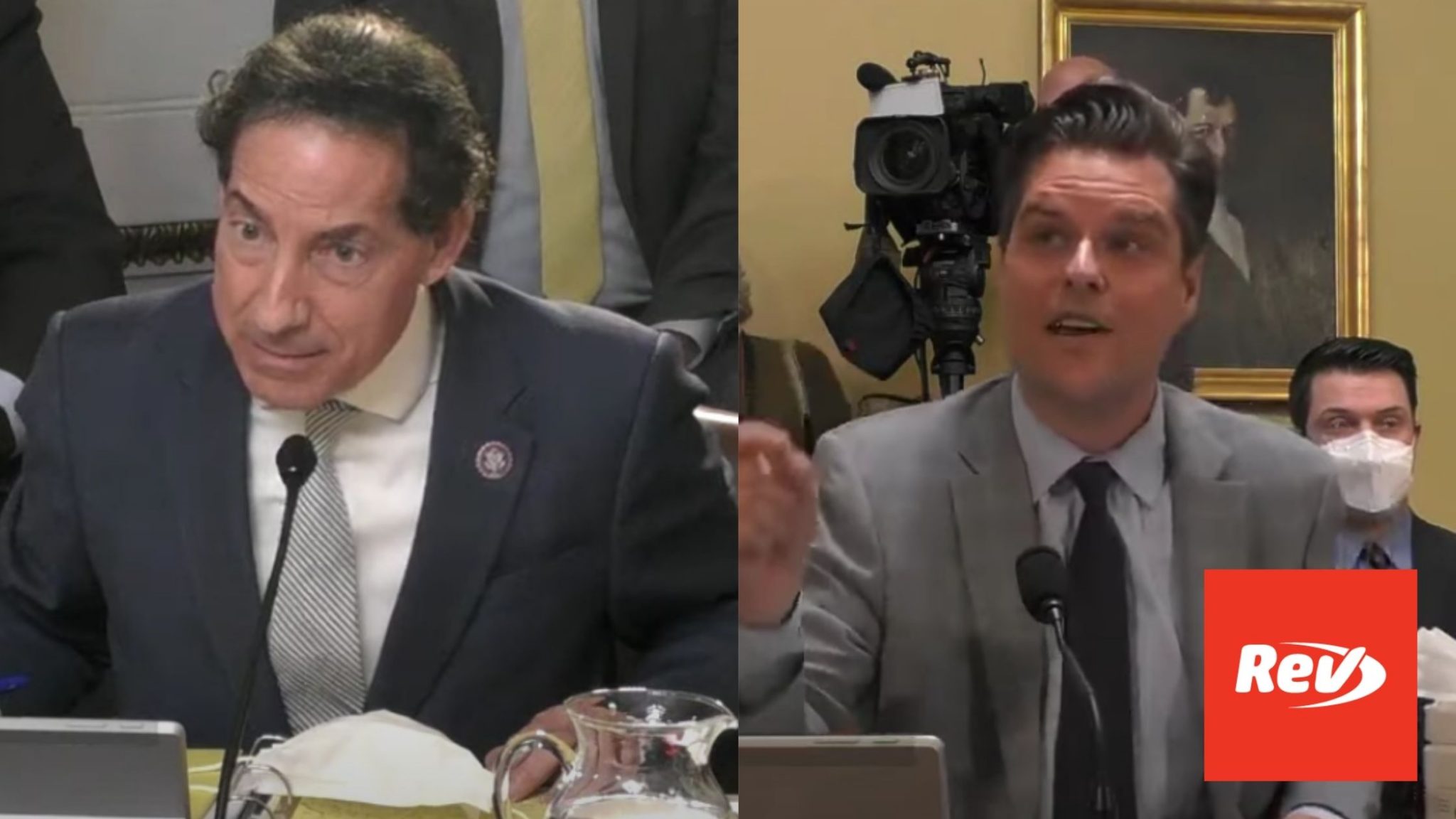 Rep. Jamie Raskin and Rep. Matt Gaetz had a combative exchange over the January 6 Capitol attack on October 21, 2021. Raskin responded to Gaetz saying “blah blah blah.” Read the transcript of the exchange here.

Jamie Raskin: (00:00)
I’ve got some serious questions to ask you. The chairman of the January 6th committee, Chairman Thompson, and John Katko, who was the emissary of Kevin McCarthy, negotiated an agreement for an independent outside commission with five Democrats, five Republicans, equal subpoena power, right down the middle. And yet, Donald Trump decided he didn’t like it because he doesn’t want anybody investigating January the sixth. So he turned against it and then the Republican leadership flipped over and turned against it. I think you voted against that commission. Why did you vote against that commission?

Matt Gaetz: (00:37)
For many of the reasons that I’ve discussed today, that the focus on January 6th, the-

Matt Gaetz: (00:46)
Mr. Raskin, we have a process in Article Three, where the courts get to determine those issues. If the United States government brings charges, people can resolve those in the courts.

Speaker 3: (01:03)
The stenographer is trying to take people’s words down and she can’t if everybody talks over each other.

Matt Gaetz: (02:11)
If Al-Qaeda or ISIS attacked the U.S. Capitol, I would think that the least capable institution to bring them to justice would be this January 6th committee.

Jamie Raskin: (02:38)
Yeah, you’ve been involved in a lot of different investigations, both of you. For example, does Benghazi ring a bell?

Jamie Raskin: (03:18)
Because people need to know, if you’re subpoenaed, you go. If you think you have a privilege, for example, let’s say Steve Bannon says, “You know what, I’m guilty as hell. I don’t want to testify against myself.” In America you don’t have to. The Fifth Amendment privilege against self-incrimination says, “I plead the Fifth. I might incriminate myself.” But you know what, you got to go. And you got to answer each specific question. Some of them might implicate your Fifth Amendment rights and some of them might not. Even if he thinks he’s got, in some surreal parallel universe, a presidential executive privilege, even though he didn’t even work for the White House at that point, he’d been fired by Donald Trump in August of 2017. This is in January of 2021 and December of 2020. But even if he thought that, he’s got to come before the committee and he has to plead it. Do you not agree with that? [crosstalk 00:04:09] No, honestly, do you not agree with that?

Matt Gaetz: (04:11)
Hold on, now Mr. Raskin, I allowed you to speak and I didn’t interrupt you. I hope I’m given the same opportunity.

Matt Gaetz: (04:15)
The honest answer is that the McGahn litigation that you and I both followed closely as members of the Judiciary Committee actually is the path forward. McGahn didn’t have to show up to assert that he was waiting for legal-

Matt Gaetz: (04:28)
Hold on, hold on, now you’re the one giving challenges to the stenographers.

Jamie Raskin: (04:37)
It’s not how it works in the Rules Committee, Mr. Gaetz, just follow this then. The President-

Matt Gaetz: (04:55)
Yeah, but President Trump has initiated litigation. Look, the reason you all waited on McGahn is because the Russia hoax wasn’t going well for you. And the reason you’re not waiting now is because you have no other legislation-

Matt Gaetz: (05:09)
… you had the McGahn playbook but you’ve ditched it because you guys need January 6th so bad.