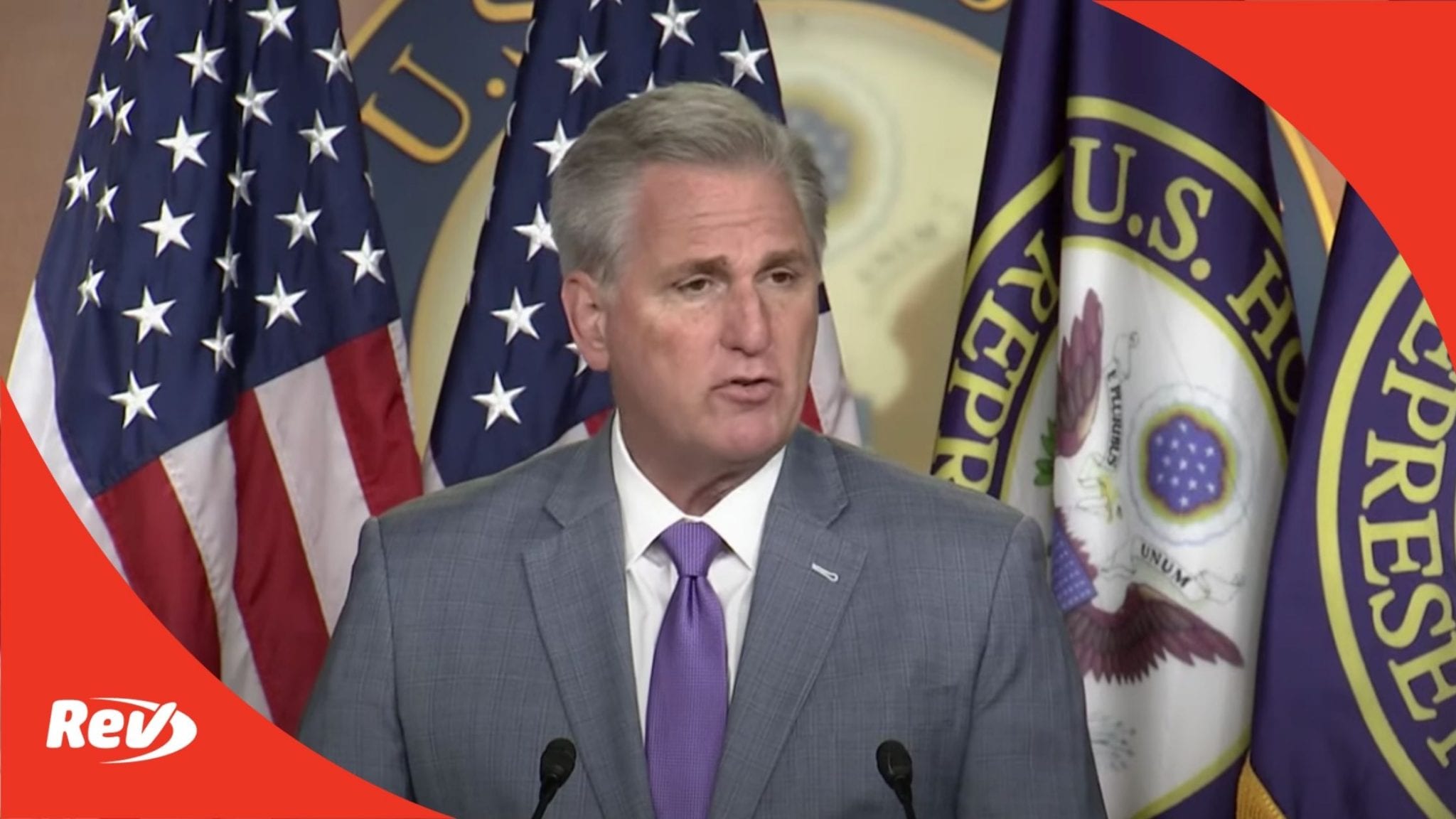 Kevin McCarthy: (03:13)
Good morning all. Early this morning Republicans approved the ranking members for the 117th Congress. The American people delivered a mandate against socialism and for real solutions. These members will actually help deliver just on that.

Kevin McCarthy: (03:28)
As many of you have reported, there has been some movement this week towards a relief package for Americans hurting from the Coronavirus, and lock downs, and restrictions. Now for months, speaker Pelosi has done nothing to help Americans who are hurting. For more than 40 times Republicans have brought on this floor, COVID relief votes that the Democrats have voted against.

Kevin McCarthy: (03:50)
60% of business closures due to COVID restrictions are now permanent. This week it was reported that 37% of small business in Massachusetts have shut down permanently. 83% of small businesses owners support more relief. While we have more than 100 billion dollars sitting in PPP today that can go to relief for small businesses. At a discharge petition sitting on the floor, and more than 20 Democrats signing a letter back in September who said if Pelosi did nothing, they would sign, it still has not moved forward. But again, more than 40 times Democrats have voted against, since summer, any COVID relief that Republicans have been able to put on the floor.

Kevin McCarthy: (04:34)
Now I’ve been working closely with President Trump, Secretary Mnuchin, and leader McConnell on the relief package that Senator McConnell introduced this week. It delivers real support for those who need it, small businesses, schools, and Americans who lost their jobs. It will also ensure our vaccines reach every American who wants it, starting with the very most vulnerable individuals. We have to get to work on this, we have to get it done, but working is something that this majority has not a good record on doing. Just look at the floor schedule this week, Democrats have focused on cats and cannabis, but not on COVID. You’d think after a humiliating defeat at the ballot box this year, that Democrats didn’t defeat one Republican incumbent. Of the 27 most vulnerable races, Republicans won them all. That Democrats would get to the picture that the Americans are demanding some action on these issues.

Kevin McCarthy: (05:31)
It certainly doesn’t appear that in the next congress anything will change. Yesterday the Democrats released next years House schedule. The average number of days working in the first session of the past four congresses have been 134 days. You would think with all the challenges that this country has, that we’d probably maybe even work, at least more, or at the very least that same amount of time. Nope. Democrats think congress needs a 25% reduction. Yes, you don’t even have to show up for work. 60 democrats yesterday, one third of them, didn’t show up for work, just voted by proxy, and still got paid. And now they found out they don’t even have to work as much as they did… congresses before. A 25% reduction, with only scheduled 101 days. They’ll probably become the laziest Congress we have ever had.

Kevin McCarthy: (06:49)
She filed the house administration, it’s the wrong place to go. If you have these challenges, you should go to court. Why would she avoid going to court? This has already been through a recount. The recount has finished. The Republican, Mariannette Miller-Meeks is the winner and I expect her to be seated come January.

Kevin McCarthy: (07:17)
The bloody eight on Indiana where power corrupts absolutely? Where they took away the voice of the American public who voted for an individual, and the Democrats sitting in the House decided who won and lost? Let’s hope it does not come to that. That should never return itself, ever, in this country again.

Speaker 9: (07:33)
Do you take that attorney general [inaudible 00:07:35] word that there was no widespread voter fraud that would have changed the outcome of the election?

Kevin McCarthy: (07:39)
I’m sorry, when did the attorney general say that?

Kevin McCarthy: (07:50)
We continue to work on the NDAA. We know that we will get an NDA done as we’ve done for the last 60 years, but we also know that section 230 of what has happened, what I stated back in October, it needs to be repealed. These technology companies are not acting in the manner of why 230 was created, to give them protections. If they want to pick and choose what goes on and we see on a daily basis, they don’t need that protection any longer.

Speaker 11: (08:20)
Joe Biden says that on his first day in office, he’ll use Title IX to give transgender students access to sports, bathrooms, and locker rooms in accordance with their gender identity in all federally funded schools. Do you think he has the power to unilaterally do that, and do you agree with that?

Kevin McCarthy: (08:35)
Let’s wait until whose sworn in and we can discuss that. Yes?

Speaker 12: (08:40)
COVID relief, give us a timeline? When do you think it needs to be done? McConnell sounded relatively optimistic this morning. Schumer [inaudible 00:08:48]. Do you have a… the government runs out of money next week so-

Kevin McCarthy: (08:53)
Yeah, we have December 11th, so you have a date. That’s government funding though, that’s not COVID. For too long Pelosi has used this for a political gain, harming the economy, picking individuals to harm simply for the fact that she wanted an outcome to an election. The election is over, so I’m more optimistic now that we can get something done. But unfortunately more people are hurting. 40 times the Democrats had an opportunity that they voted no on. Working with President Trump, with Mnuchin, and with McConnell, I feel we’ve got a better opportunity now than at any time. I think those members on the Democratic side who said they would sign a discharge petition, if they would sign that discharge petition, I bet you we’d get a COVID bill that day.

Speaker 12: (09:40)
On government funding to do foresee an omnibus coming together or do you think it’ll be a CR at this point?

Kevin McCarthy: (09:48)
I can see how we could have an omnibus. I could also see how Democrats can play a game and make it a CR, which is not beneficial to the nation, costs us more in the long run. I’d like to see an omnibus get done.

Speaker 13: (10:00)
On the $900 billion bipartisan proposal that came out earlier this week, what are your thoughts on that and is there any concern that if Republicans don’t step forward a little bit on this compromised proposal that they might get backlash that you guys aimed at Democrats for not accepting the problem solvers-

Kevin McCarthy: (10:16)
The Republicans only goal is to get a bill done. We’ll work with anyone who wants to work with it. We’ve watched Nancy Pelosi every time we’ve done a bill from the CARES Act and others, to stop it. She’s been successful in stopping COVID relief throughout the entire summer; even though she said the House would not leave until we got a bill done. we’ve watched them vote 40 times against it. Republicans will always work together to find common ground, especially with Americans hurting the way they are. Just as we’ve done all summer long, and I’m more hopeful today than I was in the past that we can get it done, because many people are finally telling Nancy Pelosi and her own party that she has been wrong to hurt those who are unemployed, the small businesses that are shuttering every day. Not every business can be named the French laundry, and people will just go to it. Small businesses are now shutting down.

Kevin McCarthy: (11:10)
To be clear we have a proposal out there right now that I think we can work and work towards. The $900 proposal I know they put out there, but I think what has been working on right now with the White House, with Mnuchin, with McConnell and the senate on the other side, is really the starting point in where we’ll probably end up.

Speaker 15: (11:26)
Can you clarify that point a little bit? You talked that you’ve been working with the White House on this. Do you view that Mnuchin, McConnell, framework that we’ve all seen now is the starting point for negotiations or sort of this is the offer, take it or leave it?

Kevin McCarthy: (11:38)
No, no, look, we want to get a bill done. At the same time we’ve been trying to talk with the Speaker. I think she is becoming more open than she has in the past. Hopefully that she’s viewing what is going on across the country. The pain that is happening. The Speaker, a number of weeks ago said, “Doing nothing is better than doing something.” She’s probably the only person in this country that believes that. I hope she’s finally changed her belief on that.

Kevin McCarthy: (12:08)
Doing nothing is not better than doing something. That means nobody gets help. And I think people have been hurt too long, businesses have been shut down permanently, people have lost their jobs. You can walk anywhere in this country, you can see that. But you can also tell exactly the person that has caused it. The Speaker of this House has denied the ability to help go to the American public, simply because she wanted to determine something would happen in election, to harm President Trump in him getting reelected.

Kevin McCarthy: (12:41)
But what has happened is, American people are hurting, and that has got to stop. Thank you all very much. Hope you have a good weekend.