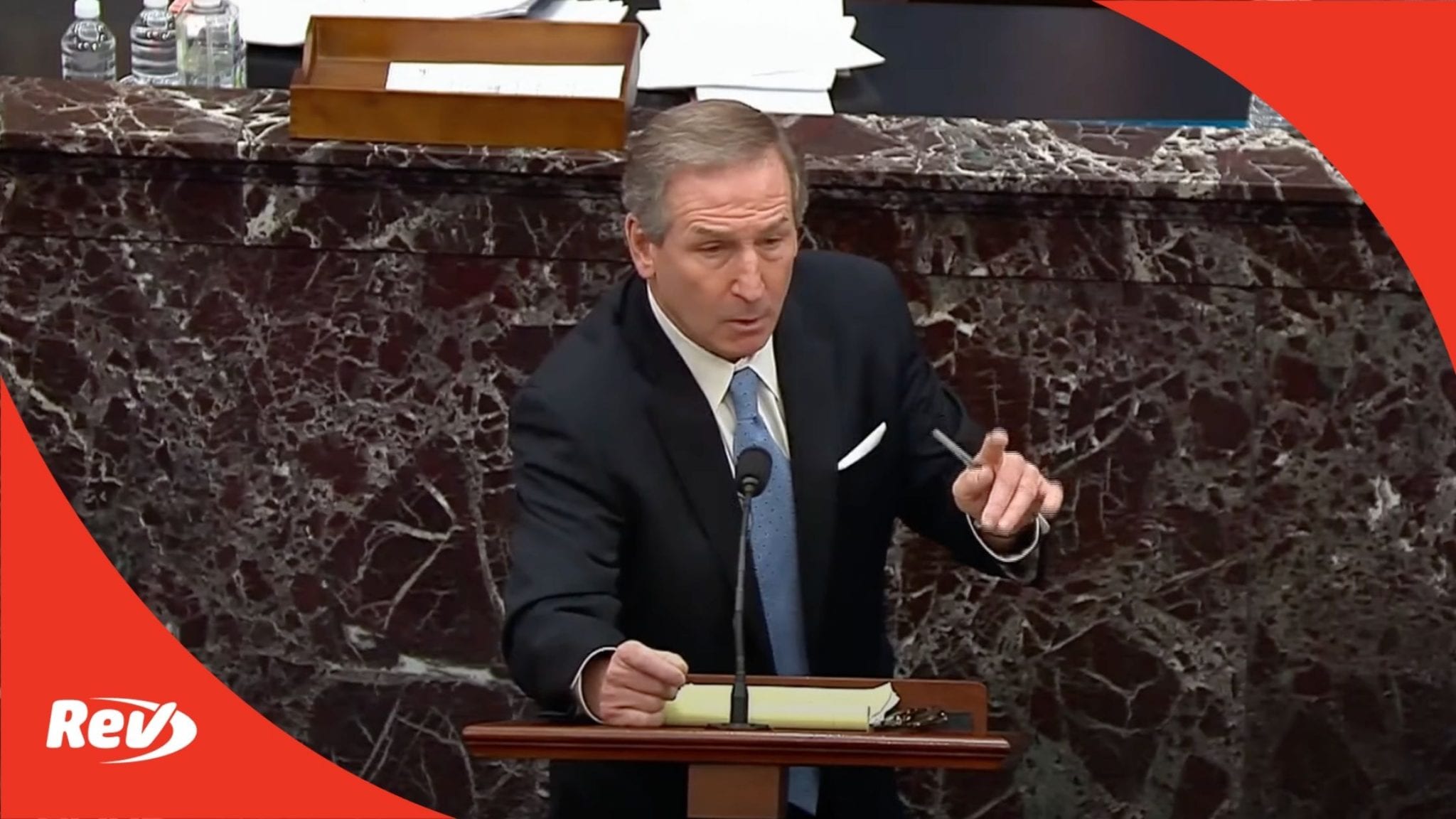 Jamie Raskin: (00:01)
Thank you, Mr. President. Good morning senators. Over the last several days, we presented overwhelming evidence that establishes the charges in the article of impeachment. We’ve shown you how President Trump created a powder keg, lit a match, and then continued his incitement even as he failed to defend us from the ensuing violence. We’ve supported our position with images, videos, affidavits, documents, tweets, and other evidence leaving no doubt that the Senate should convict. We believe we’ve proven our case.

Jamie Raskin: (00:35)
But last night, Congresswoman Jaime Herrera Beutler of Washington state issued a statement confirming that in the middle of the insurrection, when House Minority Leader Kevin McCarthy called the president to beg for help, President Trump responded and I quote, “Well, Kevin, I guess these people are more upset about the election than you are.” Needless to say, this is an additional critical piece of corroborating evidence, further confirming the charges before you, as well as the president’s willful dereliction of duty and desertion of duty as Commander in Chief of the United States, his state of mind, and his further incitement of the insurrection on January 6.

Jamie Raskin: (01:22)
For that reason and because this is the proper time to do so under the resolution that the Senate adopted to set the rules for the trial, we would like the opportunity to subpoena Congresswoman Herrera regarding her communications with House Minority Leader Kevin McCarthy, and to subpoena her contemporaneous notes that she made regarding what President Trump told Kevin McCarthy in the middle of the insurrection. We would be prepared to proceed by Zoom deposition of an hour or less just as soon as Congresswoman Herrera Beutler is available and to then proceed to the next phase of the trial, including the introduction of that testimony shortly thereafter. Congresswoman Beutler further stated that she hopes other witnesses to this part of the story, other patriots as she put it, would come forward. And if that happens, we would seek the opportunity to take their depositions via Zoom also for less than an hour, or to subpoena other relevant documents as well.

Michael van der Veen: (02:29)
[crosstalk 00:02:29] President. Thank you. Senators, good morning, and good morning to the American people. The first thing I want to say on the issue of witnesses is that the House manager just got up here and described the articles of impeachment and of the charges. There is no plural here. That’s wrong. There’s one article of impeachment and there’s one charge, and that’s incitement of violence and insurrection. What you all need to know and the American people need to know is as of late yesterday afternoon, there was a stipulation going around that there weren’t going to be any witnesses. But after what happened here in this chamber yesterday, the House managers realize they did not investigate this case before bringing the impeachment. They did not give the proper consideration and work. They didn’t put the work in that was necessary to impeach the former president.

Michael van der Veen: (03:42)
But if they want to have witnesses, I’m going to need at least over 100 depositions, not just one. The real issue is incitement. They put into their case over 100 witnesses, people, who have been charged with crimes by the federal government. And each one of those, they said that Mr. Trump was a co-conspirator with. That’s not true, but I had the right to defend that. The only thing that I ask if you vote for witnesses, do not handcuff me by limiting the number of witnesses that I can have. I need to do a thorough investigation that they did not do. I need to do the 911 style investigation that Nancy Pelosi called for. It should have been done already. It’s a dereliction of the House manager’s duty that they didn’t.

Michael van der Veen: (05:01)
And now at the last minute, after a stipulation had apparently been worked out, they want to go back on that. I think that’s inappropriate and improper. We should close this case out today. We have each prepared our closing arguments. I mean, I had eight days to get ready for this thing, but we each had those eight days equally together to prepare ourselves, and the House managers need to live with the case that they brought. But if they don’t, please, in all fairness in an all due process, do not limit my ability to discover, discover, discover the truth. That would be another sham, and that’s the president’s position, my position.

Jamie Raskin: (06:18)
Thank you, Mr. President. First of all, this is the proper time that we were assigned to talk about witnesses. This is completely within the course of the rules set forth by the Senate. There’s nothing remotely unusual about this. I think we’ve done an exceedingly thorough and comprehensive job with all the evidence that was available. Last night, this was breaking news and it responded directly to a question that was being raised by the president’s defense counsel saying that we had not sufficiently proven to their satisfaction. Although I think we’ve proven to the satisfaction of the American people certainly, that the president after the breach and invasion took place, was not working on the side of defending the capital, but rather was continuing to pursue his political goals. And the information that came out last night by Congresswoman Beutler apparently backed up by contemporaneous notes that she had taken, I think will put to rest any lingering doubts raised by the president’s counsel who now says he wants to interview hundreds of people.

Jamie Raskin: (07:23)
There’s only one person the president’s council really needs to interview and that’s their own client, and bring him forward as we suggested last week because a lot of this is matters that are in his head. Why did he not act to defend the country after he learned of the attack? Why was he continuing to press the political case? But this piece of evidence is relevant to that.

Jamie Raskin: (07:52)
Finally, I was a little bit mystified by the point about the article of impeachment, which I referred to. The dereliction of duty, the desertion of duty is built into the incitement charge obviously. If the President of the United States is out inciting a violent insurrection, he’s obviously not doing his job at the same time. Just like if a police officer is mugging you, yeah, he’s guilty of theft and armed robbery, whatever it might be, but he’s also not doing his job as a police officer. So it’s further evidence of his intent and what his conduct is.

Michael van der Veen: (08:36)
First of all, it’s my understanding it’s been reported that Mr. McCarthy disclaims the rumors that have been the basis of this morning’s antics, but really the rumors that have been the basis of this entire proceeding. This entire proceeding is based on rumor report innuendo. There’s nothing to it, and they didn’t do their work. Just like what happened with Mr. Lee two or three nights ago, there’s some supposed conversation that happened and they had to withdraw that, they had to back off of that because it was false. It was a false narrative. But it is one article of impeachment. Yeah, they threw a lot of stuff in it in violation of rule 23. Rule 23 says you cannot combine counts. It’s a defect in their entire case. It’s one of the four reasons why you can devote to acquit in this case. Jurisdiction, rule 23, due process, and the First Amendment. They all apply in this case.

Michael van der Veen: (09:53)
Let me take my own advice and cool the temperature in the room a little bit. It’s about the incitement. It’s not about what happened afterwards. That’s actually the irrelevant stuff. That’s the irrelevant stuff. It’s not the things that were said from the election to January 6th. It’s not relevant to the legal analysis of the issues that are before this body. It doesn’t matter what happened after the insurgence into the Capitol building because that doesn’t have to do with incitement. Incitement, it’s a point in time, folks. It’s a point in time when the words are spoken and the words say, implicitly say, explicitly say, “To commit acts of violence or lawlessness.” And we don’t have that here. For the House managers to say we need depositions about things that happened after, it’s just not true.

Speaker 1: (12:21)
I would remind everybody that we will have water in the chamber during these proceedings.

Michael van der Veen: (12:37)
I haven’t laughed at any of you, and there’s nothing laughable here. He mentioned my client coming in to testify. That is not the way it’s done. If he wanted to talk to Donald Trump, he should have put a subpoena down. Like I’m going to slap subpoenas on a good number of people if witnesses are what is required here for them to try to get their case back in order, which has failed miserably for four reasons. There is no jurisdiction here. There has been no due process here. They have completely violated and ignored and stepped on the Constitution of the United States. They have trampled on it like people who have no respect for it. And if this is about nothing else, it has to be about the respect of our country, our Constitution, and all of the people that make it up.

Michael van der Veen: (13:44)
So I ask when considering or voting on this witness matter, and to be clear, this may be the time to do it, but again, and everybody needs to know the back room politics. I’m not so much into it all and I’m not too adept at it neither. But there was a stipulation. They felt pretty comfortable after day two until their case was tested on day three. Now is the time to end this. Now is the time to hear the closing arguments. Now is the time to vote your conscience. Thank you.

Jamie Raskin: (14:39)
We were involved in no discussions about a stipulation, and I have no further comment. Thank you, Mr. President.

Speaker 1: (15:04)
I would remind everybody as Chief Justice Roberts noted on January 21, 2020 citing the trial of Charles Swayne in 1905, all parties in this chamber must refrain from using language that is not conducive to civil discourse. I listened to Chief Justice Roberts say that. I agreed with him, and I thought for our colleagues, I would repeat it as I did last night.