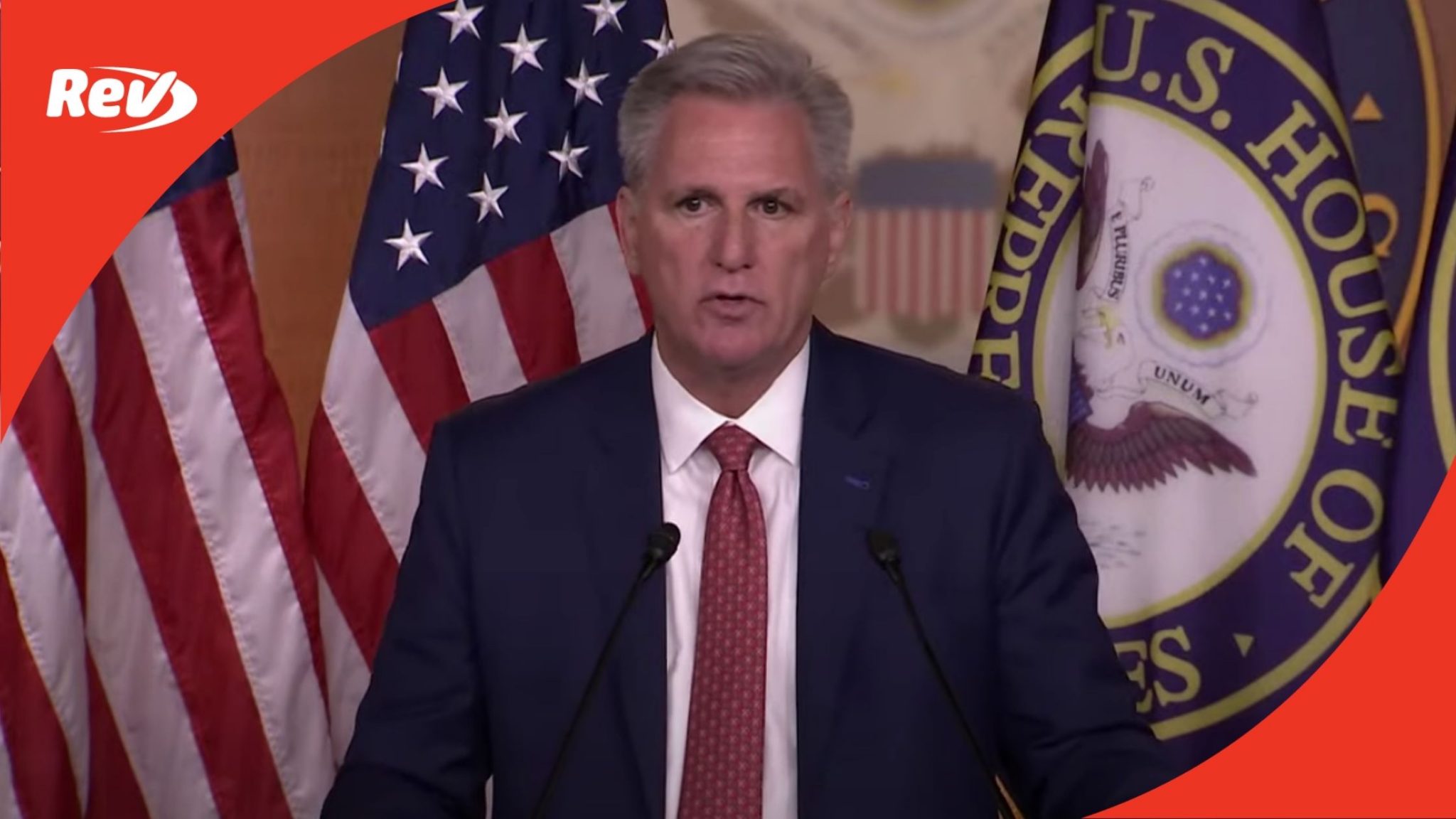 Kevin McCarthy: (00:00)
… government agencies and even more inflation that will lead to higher costs for all Americans. Those are all on the table. Yet the details change by the minute. Could have changed since I walked in here. As one Democrat remarked, “We were just missing two things, what exactly is going to be in the bill and how we’re going to pay for it. Other than that, we are good to go.” Remember Speaker Pelosi’s famous quote, “We need to pass the bill so we can find out what’s in it.”

Kevin McCarthy: (00:31)
When the White House rushes out a framework hours before the president comes to the Hill, you know they are desperate and just grasping for straws. This is no longer a Congress where the best ideas compete. They’re now competing for a vote based upon when Air Force One lands in Rome. I have a hard time believing that the American public thinks it’s a good idea for 87,000 more IRS agents. We begin to hear different things that are getting pulled out of the bill, but there’s one thing that I’ve never heard pulled out of the bill, the 200 million for Pelosi’s park. That apparently will always stay in.

Kevin McCarthy: (01:47)
With Thanksgiving around the corner, it’s going to be the most expensive Thanksgiving for Americans. I wonder if the president feels a little like Charlie Brown in that famous scene with the football. His advisors tell him to come back up to the Hill. They promise this time Speaker Pelosi won’t pull it out from under her, but we’ll find out today if she does the exact same thing.

Kevin McCarthy: (02:13)
I agree with the House Majority Whip, who said, “I’m not too sure the Democrats have yet developed the will to win in 2022.” As the lame duck speaker jets around the world on her farewell tour and puts together a multitrillion-dollar bill in her office, you have to wonder, how long until the rest of the Democrats wake up? Speaker Pelosi has destroyed this institution and its ability to function on behalf of the American public. As more Democrats tap out, Republicans are ready to put America back on the field to turn our country around and build a country that all can be proud of.

Speaker 2: (02:57)
If Speaker Pelosi does bring this vote up to the floor today on the bipartisan infrastructure proposal that has passed the Senate, how many of your Republican members do you expect to vote in favor of it? And have you talked to any of them who have previously voiced support about not supporting it this time?

Kevin McCarthy: (03:14)
I’ve heard from some who said they would have supported it before, but when the president, Biden, and Speaker Pelosi made it one bill, many of them pulled off. I don’t expect few, if any, to vote for it if it comes to the floor today. I don’t know if it will make it to the floor.

Kevin McCarthy: (03:30)
It’s interesting, talking to many of the Democrats, they saw what happened to Josh Gottheimer, that he was given a promise by Speaker Pelosi, and that promise has been broken many times. It was a promise on something yet to come. So he voted for reconciliation to move forward, and they found that was a bad deal. Now she’s going to the progressives with the exact same thing she promised Josh Gottheimer and failed at three times. I’m not sure the progressives will buy that maybe in the future they’ll get something, maybe in the future they’ll have a vote, maybe in the future, vote for something today but not knowing what’s in it for tomorrow. I think it’s hard for them to bring it to the floor.

Speaker 3: (04:17)
Two of your Senate colleagues have asked for Attorney General Garland to resign. I’m wondering if that’s something that you would also ask for.

Kevin McCarthy: (04:24)
Well, as you know, I sent him a letter. The first thing he needs to do is apologize to the American public, end his investigation on the parents that have a right to go and ask questions. You had the school boards actually rescind their letter. That’s what he based his investigation on. I watched his hearing yesterday. It was despicable. That is not becoming of an attorney general, and we can do much better.

Speaker 4: (04:48)
Yeah, I want to ask you, a while back you had indicated you didn’t support the January 6th commission because you said it wasn’t bipartisan, because it did not include Antifa and Black Lives Matter. Assuming that you considered those entities to be Democratic, doesn’t that serve as an admission that the insurrectionists are Republican?

Speaker 4: (05:15)
To make it bipartisan, you had to include those two. So if they were included, wouldn’t you have to have the other side, meaning that you would have to have the Republican side and that’s the insurrectionists?

Kevin McCarthy: (05:27)
With all due respect, I don’t think your question makes any sense whatsoever. When I talked about January 6th and having a bipartisan commission, that would be equal Republicans and Democrats. That would be doing exactly what we have always done on a select committee, that the minority could nominate the individuals from their party onto the committee. Your question raises a totally different-

Speaker 5: (05:49)
Following up on the question about votes on the bipartisan infrastructure bill, some of your members who are in tough reelections, I know there’s lots of seats aren’t drawn, et cetera, but do you expect some members to vote for it because it would be good for them politically?

Kevin McCarthy: (06:07)
I don’t see how it’d be good for them politically. Let’s think about this. It’s not viewed as one bill anymore. Not just the Speaker, the president always views it as a combination together, that you can’t pass one without the other. If it was one bill, why did the president come here twice and promise them? Why is the Speaker sitting down with the progressives and promising something based to get their vote on this bill? Why is the president laying out a framework on another bill to promise to vote for this bill? It’s one bill together.

Kevin McCarthy: (06:39)
So politically, for anyone, I don’t think it’s a smart bill whatsoever. That’s why I think it’d be difficult for people to vote for it. Had they kept it separate, had they worked with the Republicans who were actually on the Transportation Committee, which we wanted to do, which we sat down, which we produce legislation for… America needs infrastructure. I’m from California. I sit back and I look at the hundreds of ships sitting out there, the failures of this administration, and when I look at the supply side, it should be fundamentally different. Yeah, we need to improve our ports, but we should be making those products in America, and those ships should be going to other countries, bringing our products to them. I don’t see it is a bill that Republicans should vote for based upon what the Democrats have done, and the president.

Kevin McCarthy: (07:27)
You know what’s interesting? I’ve had phone calls, even from some of those 19 who voted for it, even today, telling me people shouldn’t vote for it. I think-

Kevin McCarthy: (07:37)
… what happened when it came out of the Senate… Those are private conversations, but good question. Well-done.

Kevin McCarthy: (07:45)
They will tell you personally, when it came out of the Senate way back in August, it was viewed as doing one bill. When they saw it, it was viewed as one bill. It was the Speaker and the president who, even on the day that he made the agreement at the White House, said one thing and later in the day said another, that it couldn’t move without reconciliation. They have put it into one. It is no longer a single infrastructure bill. This is all viewed as one reconciliation bill as a whole.

Speaker 7: (08:13)
So what are those Senate Republicans telling you precisely in a call today-

Kevin McCarthy: (08:17)
I had a phone call with a senator today who voted for the bill, whose recommendation, they even had a conversation with their congressional members, that they recommend not voting for it because it’s viewed as one bill. That’s going from a person who voted for it and believes that it’s one bill based upon what the president and Speaker has done.

Kevin McCarthy: (08:35)
I think we’ll be here for quite a while today. I think the screen will be up for a while until they figure out one more time, do they make Joe Biden look like Charlie Brown, and Nancy Pelosi be Lucy, pull the football out from under him? Have a good day.