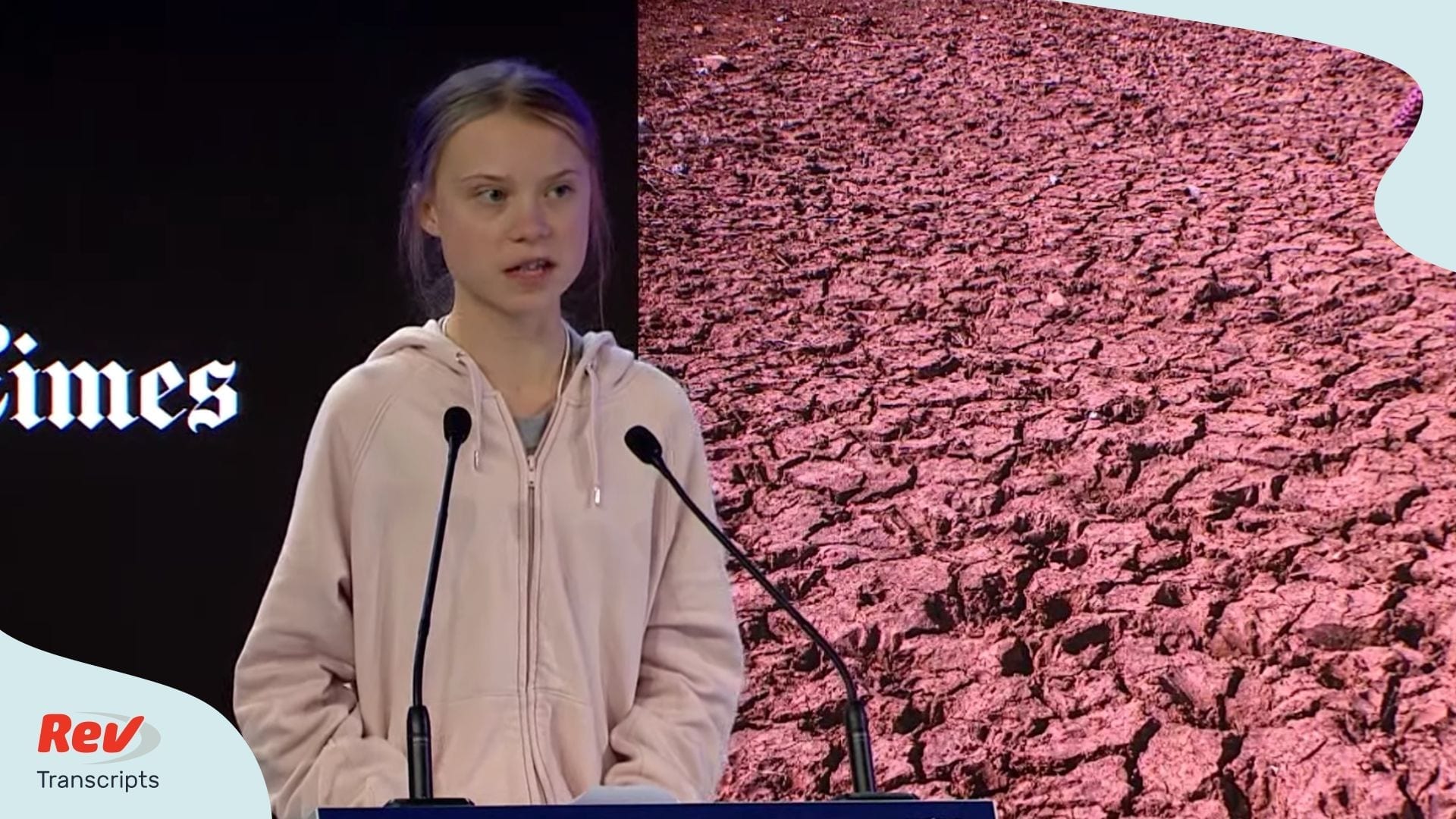 Greta Thunberg spoke about climate action at the Davos forum in Switzerland, calling for an end to fossil fuels and stating that we only have 8 years to save the planet. Read the full transcript of her January 21, 2020 speech.

Greta Thunberg: (00:12)
One year ago I came to Davos and told you that our house is on fire. I said I wanted you to panic. I’ve been warned that telling people to panic about the climate crisis is a very dangerous thing to do, but don’t worry, it’s fine. Trust me, I’ve done this before and I can assure you it doesn’t lead to anything. And for the record, when we children tell you to panic, we’re not telling you to go on like before. We’re not telling you to rely on technologies that don’t even exist today at scale and that science says perhaps never will. We are not telling you to keep talking about reaching net zero emissions or carbon neutrality by cheating and fiddling around with numbers.

Greta Thunberg: (01:34)
We’re not telling you to offset your emissions by just paying someone else to plant trees in places like Africa, while at the same time forests like the Amazon are being slaughtered at an infinitely higher rate. Planting trees is good of course, but it’s nowhere near enough of what is needed and it cannot replace real mitigation and rewilding nature. And let’s be clear, we don’t need a low carbon economy, we don’t need to lower emissions. Our emissions have to stop if you are to have a chance to stay below the 1.5 degree target. And until we have the technologies that at scale can put our emissions to minus, then we must forget about net zero we need real zero. Because distant net zero emission targets will mean absolutely nothing if we just continue to ignore the carbon dioxide budget that applies for today, not distant future dates. If high emissions continued like now, even for a few years, that budgets will soon be completely used up.

Greta Thunberg: (03:05)
The fact that the USA is leaving the Paris Accord seem to outrage and worry everyone and it should, but the fact that we are all about to fail the commitments you signed up for in the Paris Agreement doesn’t seem to bother the people in power even the least. Any plan or policy of yours that doesn’t include a radical emission cuts at the source starting today is completely insufficient for meeting the 1.5 or well below two degree commitments of the Paris Agreements.

Greta Thunberg: (03:47)
And again, this is not about right or left, we couldn’t care less about your party politics. From a sustainability perspective, the right the left as well as the center have all failed. No political ideology or economic structure has been able to tackle the climates, an environmental emergency and create the cohesive and sustainable world because of that world in case you haven’t noticed is currently on fire. You say children shouldn’t worry. You say, just leave this to us, we will fix this, we promise we won’t let you down. Don’t be so pessimistic. And then nothing, silence or something worse than silence, empty words and promises which give the impression that sufficient action is being taken.

Greta Thunberg: (04:58)
All the solutions are obviously not available within today’s societies, nor do we have the time to wait for new technological solutions to become available to start drastically reducing our emissions. So of course the transition isn’t going to be easy. It will be hard and unless we start facing this now together with all cards on the table, we won’t be able to solve this in time. In the days running up to the 50th anniversary of the world economic forum, I joined a group of climate activists demanding that you the world’s most powerful and influential business and political leaders begin to take the action needed.

Greta Thunberg: (05:50)
We demand at this year’s World Economic Forum, participants from all companies, banks, institutions and governments immediately hold all investments in fossil fuel exploration and extraction, immediately end all fossil fuel subsidies and immediately and completely divest from fossil fuels. We don’t want these things done by 2050 or 2030 or even 2021 we want this done now. It may seem like we are asking for a lots and you will of course say that we are naive, but this is just the very minimum amount of effort that is needed to start the rapid sustainable transition. So either you do this or you’re going to have to explain to your children why you are giving up on the 1.5 degree target giving up without even trying.

Greta Thunberg: (06:55)
Well, I’m here to tell you that unlike you, my generation will not give up without a fight. The facts are clear but they are still too uncomfortable for you to address. You just leave it because you just think it’s too depressing and people will give up. The people will not give up. You are the ones who are giving up. Last week I met with Polish coal miners who lost their jobs because their mind was closed and even they had not given up. On the country they seem to understand the fact that we need to change more than you do. I wonder what will you tell your children was the reason to fail and leave them facing a climate chaos that you knowingly brought upon them? That it seems so bad for the economy that we decided to resign the idea of securing future living conditions without even trying. Our house is still on fire. Your inaction is fueling the flames by the hour, and we are telling you to act as if you loved your children above all else. Thank you.