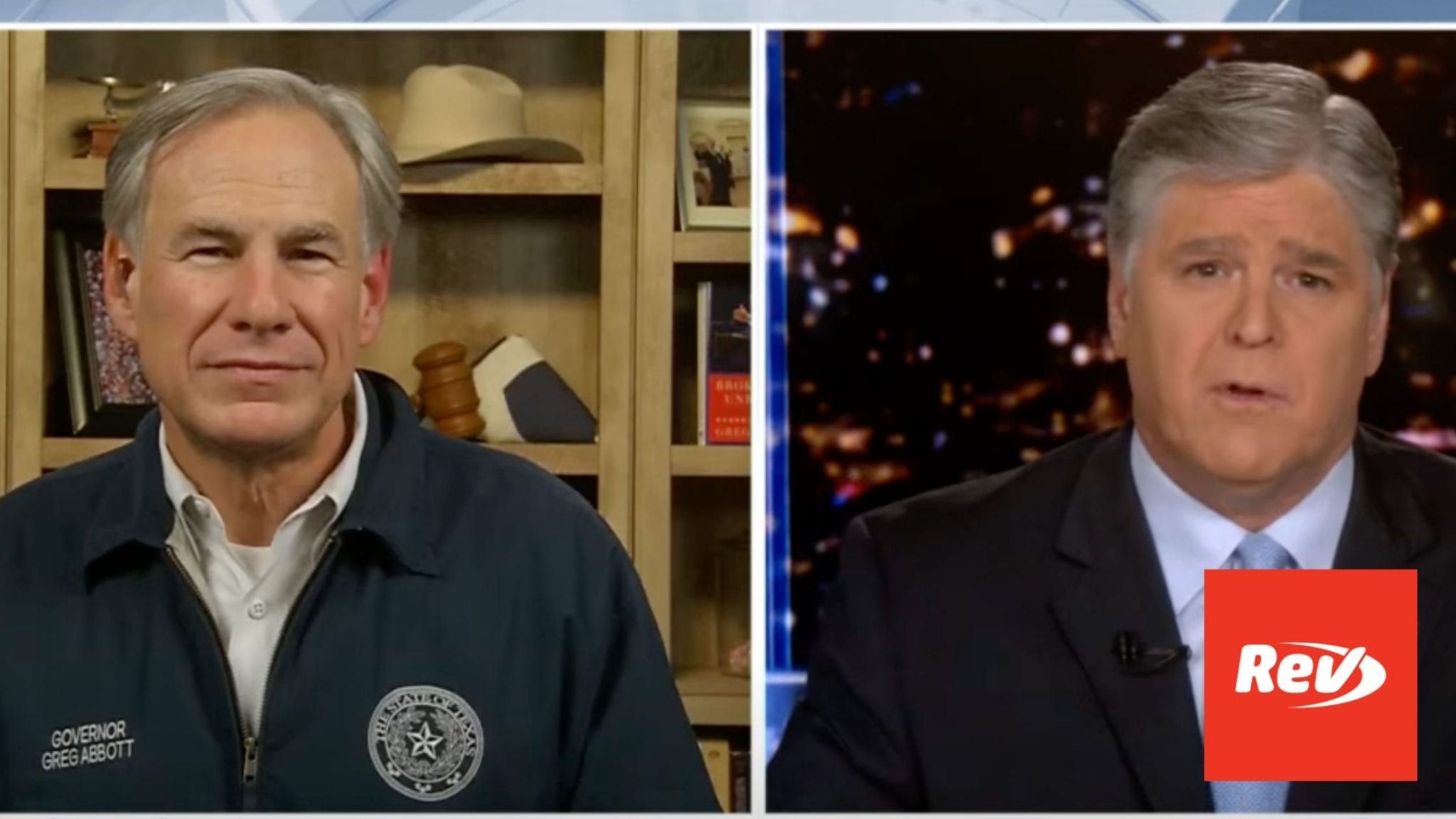 Texas Governor Greg Abbott went on Sean Hannity’s show and talked about the unprecedented winter weather, millions without power for days, and blackouts in Texas. Abbott took time to criticize the Green New Deal in the interview. Read the transcript here.

Sean Hannity: (00:00)
Texas Governor Greg Abbott calling for an investigation into the outages and he joins us now live to explain. I don’t have a problem. I’m going to be very clear. I’m an all of the above guy. Anything that works, I’m all for. Cheap energy, I’m all for, but that would include the lifeblood of the world’s economy, gas, oil, old fashioned oil and coal. I’m not against nuclear energy either. I’m not against wind turbines, but my question is if they have these rolling blackouts and you got freezing weather, and they’re not reliable, and it’s use it or lose it, what good is it?

Greg Abbott: (00:40)
So and this shows how the Green New Deal would be a deadly deal for the United States of America. Texas is blessed with multiple sources of energy, such as natural gas and oil and nuclear, but you saw from what [inaudible] said, and that is our wind and our solar, they got shut down and they were collectively more than 10% of our power grid, and that thrust Texas into a situation where it was lacking power in a statewide basis, that was power that was spread out by that ERCOT organization that you were talking about. As a result, it just shows that fossil fuel is necessary for the state of Texas, as well as other states, to make sure that we’ll be able to heat our homes in the wintertime and cool our homes in the summertime.

Sean Hannity: (01:25)
Well, and on a second level there, I mean, I’ve interviewed guys working on the Keystone XL Pipeline, and I know like, you have Leonardo diCaprio and Scarlett Johansson and Hollywood say, well, let’s close the Dakota Pipeline. Now, they’re going to close down [inaudible 00:01:40]. Well, these are high paying career jobs in the middle of a pandemic, in the middle of a time when illegal immigrants are going to be made legal, which is going to drive wages down. These are high paying career jobs for people. So the question is, is that the same problem California has been facing with these rolling blackouts? Is that the reason? Do you see similarities?

Greg Abbott: (02:07)
I think California is in a tougher situation because they’re even more reliant upon the Green New Deal type of energy, such as wind and solar, and they don’t have the capacity that a state like Texas does to be able to tap into fossil fuel, and that’s my point, Sean. And that is if the Biden administration is going to try to eradicate fossil fuels in the United States, every state is going to constantly have challenges like what America has seen take place in Texas right now. It is essential that we, as a country, remain where we continue to provide access to fossil fuels for heating, for taking care of our homes, for industrial purposes, for cities to be able to run. And so it’s just foolish to think that we can disband the use of fossil fuel and have a safe and comfortable nation.

Sean Hannity: (02:57)
We’re all going to pay more at the pump. We’re all going to pay more to heat our homes. Jobs are being lost. And these countries in the Middle East, some of which hate our guts, they’re going to get rich again. Putin is going to benefit financially. The Mullahs in Iran will benefit by financially and China’s going to benefit financially. So it makes no sense whatsoever to me to be in the Paris Accords, where they look at countries like China and India as developing nations, and we’re paying a hundred times more than they are or a significant amount more. My question is, so you still have three million people out of power right now and it’s freezing temperatures. How do you deal with the people that need help at this time?

Greg Abbott: (03:41)
We provide warming centers across the entire state of Texas for everybody who’s in a situation where they cannot be warm. In any large city at a minimum, there will be dozens and sometimes maybe approaching a hundred warming centers to help the people in our state. And so we have the National Guard deployed across the state, as well as the Texas Department of Public Safety, the Texas Transportation Division, even Texas Parks and Wildlife working with local officials to make sure that our fellow Texans, they will be taken care of during this trying time. But our same goal at the same time is to make sure that we have ERCOT working around the clock, as well as working with the energy generators to make sure they get the energy back online so people can get back in their homes and get back to normal as quickly as possible.

Sean Hannity: (04:27)
I’m watching, we just ran some video of plows, and I’m thinking Texas doesn’t need plows and sanders and salters. Were you able to work with other governors? How were you able to get those plows there so fast?

Greg Abbott: (04:43)
Sean, those were already in Texas. So the Texas Transportation Department, they deployed more than 700 snowplows across the entire state.

Greg Abbott: (04:59)
Sean, Amarillo is closer to Colorado than it is Austin, Texas. And so there are parts of Texas where it actually does snow that much. And so we were prepared for that. One thing, Sean, that was unprecedented was the ultra low, below 10 degrees temperature. Sean, by equivalents, this would be like a week long in Alaska at a hundred degrees plus without any air conditioning, which they don’t have because they don’t need. And so this is a very tough week for Texans, but we’re going to get through it. It’s going to be about 60 degrees in Austin, Texas this weekend. And so the snow will melt, the ground will thaw and we will work to get back to normal as quickly as possible.

Sean Hannity: (05:46)
All right. One thing I do know about Texans, they’re tough. Governor, we wish you the best. We hope you can get your power up soon so everyone can get back in their home safely. Thank you, sir.