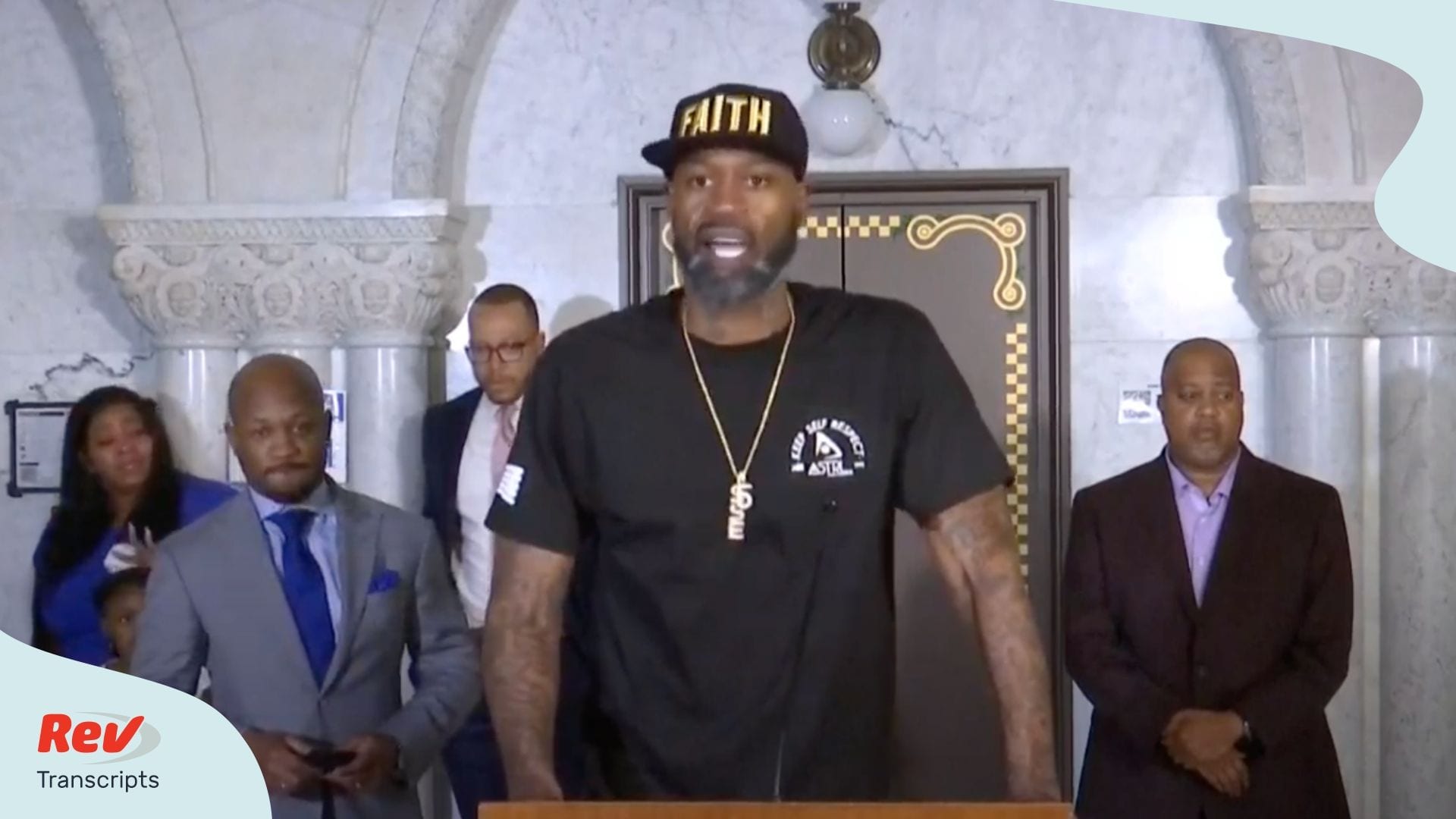 Justin Miller: (00:00)
All right. Good afternoon. My name is Justin Miller. I’m here today with my law partner, Chris Stewart. The name of our firm is a Stewart Trial Attorneys. We’re here today with Miss Roxie Washington, Stephen Jackson, Gigi Floyd, Gianna Floyd, who was George Floyd’s daughter. On behalf of the family, we’d just like to say to America and to the world, “Thank you. Thank you for being present with us in the moment. Thank you for caring. And thank you for showing your support.”

Justin Miller: (00:42)
This battle, this fight is not over. And today, we just want to show the world that George Floyd is not just a name, not just a meme, and not just something to be chanted. George Floyd was a real person. He was a good person and he had people that loved him. And so, we’re here today to show the world, these are the people that loved him, especially this young lady here and this young lady here. And with that, I’m going to pass it to my law partner, Chris Stewart, and he’ll say a few words.

Chris Stewart: (01:20)
The image that most of us have of George Floyd is the horrible video that we’ve seen. We’ve seen the anger in the streets. We’ve seen so much violence. We’ve seen beauty, also. We’ve seen people standing up and speaking up. And we’ve seen massive changes happening across the country. But what we really wanted the world to see is the beauty of their child, the beauty of Gianna, who’s going to be taller than me soon, just like her dad, the beauty of Roxie who is holding up strong throughout this, and the actual situations in life that these things affect. It’s not just that someone passes and people are angry in the street. It affects people’s actual lives and their futures. So a father was taken. You’ve seen Ben, who we’re working with and that team. A brother and sister lost another brother. And here, I want to introduce you to Roxie and to Gigi.

Roxie Washington: (02:40)
I don’t have a lot to say because I can’t get my words together right now, but I wanted everybody to know that this is what those officers took from…

Roxie Washington: (03:06)
At the end of the day, they get to go home and be with they families. Gianna does not have a father. He will never see her grow up, graduate. He will never walk her down the aisle. If it’s a problem she’s having and she needs her dad, she does not have that anymore. I’m here for my baby. And I’m here for George because I want justice for him. I want justice for him because he was good. No matter what anybody thinks, he was good. And this is the proof that he was a good man.

Chris Stewart: (06:21)
We literally flew up here from Atlanta where today the district attorney indicted six officers who were involved in beating those college students and tasering them. The district attorney, the mayor, and our chief of police took action in under a week, fired and indicted. But yet here, we’re still waiting for the arrest of the other officers. Why can’t that be a blueprint of what should happen in these officer-involved situations? The pictures last forever, but justice never truly comes in this. And time and time again, we’re fighting these cases.

Chris Stewart: (07:03)
Everybody at home is wondering why riots are happening, why protesting is happening. It is because situations like this do not get addressed. No one is saying that every police officer out there is out to try and kill somebody. But when someone does do something, when someone crosses the line, they have to go through the system and be held accountable. How is that not fair? And it always happens to African Americans. And the end result is this. And it’s a circle because then it’s held against a young African American child when they don’t have a parent, when they don’t have a father. Now, we’re somehow less than equal because we’re missing that dad. Well, this is going to be the reason that Gianna is missing that dad, through no fault of her own, through no fault of his. So this helps that cycle and it has to end. And we plan on fighting until the end to make sure that that happens even with new policies being instituted, with the investigation that was announced today. We hope to see further steps, so that this never happens again.

Speaker 5: (08:32)
Could Roxie just talk about the man George was, and father? And give us some beautiful memories of him.

Roxie Washington: (08:49)
He was a good man, as a father. He was so happy to have her. He was there. He slept the whole time that I went through labor, but when he heard her cry, he got up. He woke up. And I still have a picture of him waking up and getting his baby. He loved her. He loved her so much.

Speaker 6: (09:22)
All right, can you tell us a little bit about what he told you where he wanted to move to Minneapolis? Why did he want to move? What did he tell you?

Stephen Jackson: (09:59)
That was his main reason for moving. When he called me, his whole reason for coming was to get here, get away from Texas, so he can come and provide for his family. Be a better father, be a better provider. His whole reason for being in Minnesota was to work and drive trucks. That’s why he came here. And he was doing that. He was doing great here. He was turning the curve. And then this happened. So he was doing his part.

Chris Stewart: (10:22)
So we hope you all see the human side of George and not just pictures and videos on the internet. And that he has a legacy, a beautiful legacy, that no matter how rough and chaotic the world looks right now, this beautiful little girl is going to have a bright future.

Chris Stewart: (10:42)
And like Jay said, we’re going to guarantee that. Making sure everybody’s held accountable and making sure that her future is bright. So now associate this beautiful little face when y’all think of that memory. And when you see images or some outlets trying to bring up things to destroy a man’s name, you think of this every single time you see him like that.