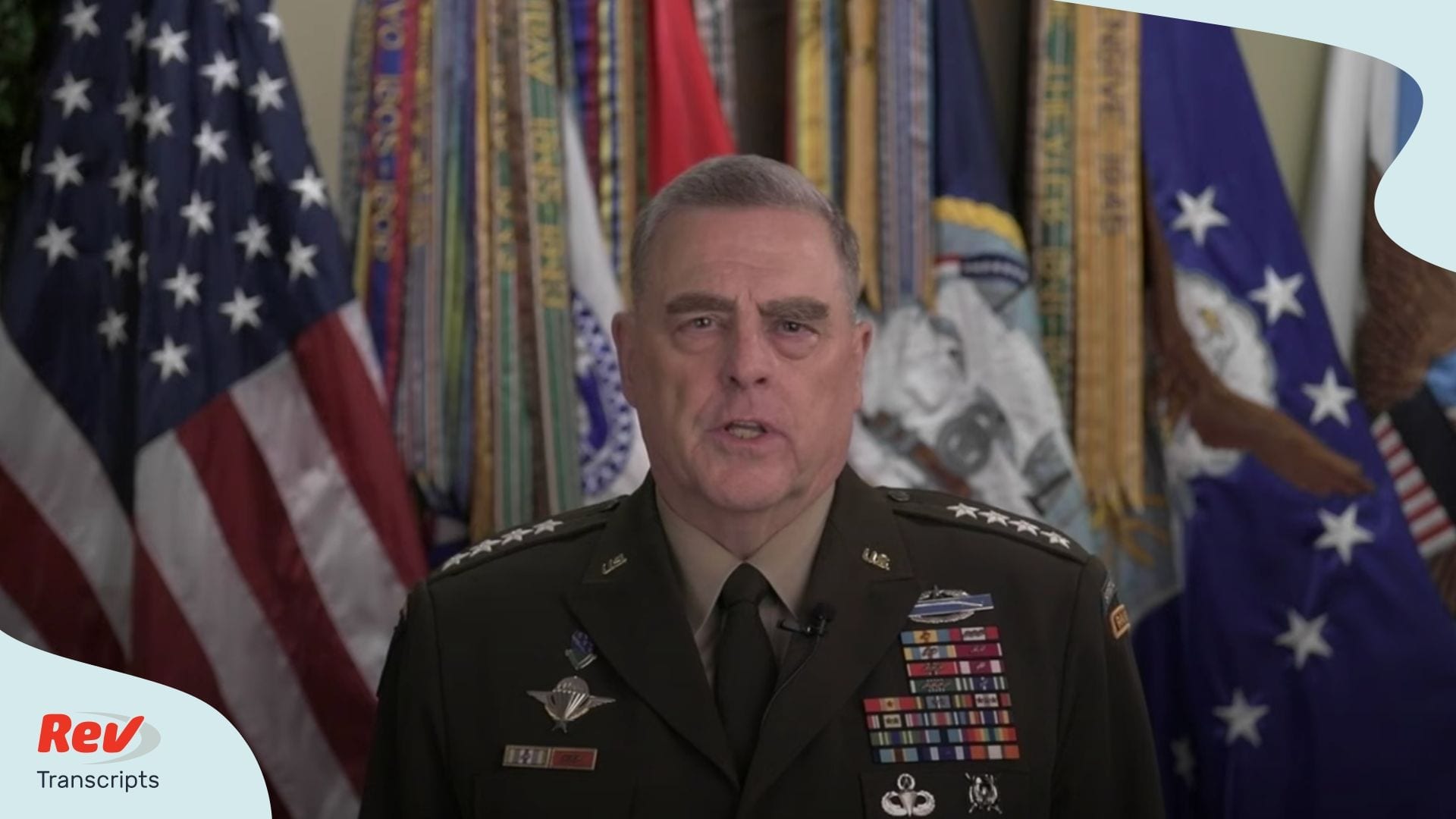 General Mark Milley gave a keynote address to National Defense University Class of 2020. In the address he apologized for taking part in Donald Trump’s church photo op outside the White House, saying “I should not have been there…It was a mistake.” Read the full keynote address transcript here.

General Mark Milley: (00:01)
Thanks Fritz, for that introduction, but more importantly for your leadership. NDU is world class and creates leaders who affect substantive change in the military, across the government and among our many allies and partners around the globe. To the graduating class, congratulations, be proud and appreciative of the opportunity you’ve had to read, reflect and engage with your military, inter-agency and international peers about the challenges facing our nation.

General Mark Milley: (00:31)
You are the future leaders of our nations joint force and our allied and partner militaries. Among you sits future chairman, service chiefs, combatant commanders, and agency directors. Soon, you will all have enormous responsibility to protect our country and its values. The United States military faces many challenges, abroad, China and Russia are increasing their military capabilities and taking assertive actions to exert global influence and challenge the existing international order. North Korea threatens our regional allies and potentially our homeland with the development of nuclear and ballistic missile capabilities.

General Mark Milley: (01:11)
Iran is the world’s largest state sponsor of terrorism, and they have taken advantage of instability to expand their malign influence and challenge the interests of the United States and our allies and partners in the Middle East. And violent extremism remains a generational trans regional struggle, requiring sustained, political, fiscal and military solutions. The International Order born from the ashes of the second World War is under assault. The world has enjoyed unprecedented economic development and relative peace and stability since more than 150 million people were killed in the conduct of great power war in the 31 years, between 1914 and 1945. Twice before in history that I’m aware of from 1648 to 1750 and 1815 to 1914, there was an international order established on the continent of Europe, both lasted about a 100 years. We are now in the 75th year of the current order and it is under stress.

General Mark Milley: (02:18)
We are in the return of great power competition and we need to remain in competition and prevent the return of great power war. Our contribution as a military to that end state is a highly capable, agile and ready joint force. We have taken significant steps to increase investment in the current readiness in order to deter and defend against today’s threats while modernizing our force through innovative concept development, advanced technology and new capabilities for the security challenges of tomorrow. We are indeed leading the joint force and dynamic in uncertain times. The recent medical crisis has cost over a 100,000 lives and it has stressed our health system, our economy, and the social fabric of our communities. All of these challenges and many more will exist in the national security framework under which you, each of you will operate as senior officers.

General Mark Milley: (03:16)
We have also seen over the last two and a half weeks an especially intense and trying time for America. I am outraged by the senseless and brutal killing of George Floyd. His death amplified the pain, the frustration, and the fear that so many of our fellow Americans live with day in and day out. The protests that have ensued, not only speak to his killing, but also to the centuries of injustice towards African Americans. What we are seeing is the long shadow of original sin in Jamestown, 401 years ago. Liberated by the Civil War, but not equal in the eyes of the law until a 100 years later in 1965. We are still struggling with racism and we have much work to do. Racism and discrimination, structural preferences, patterns of mistreatment, unspoken and unconscious bias have no place in America. And they have no place in our armed forces.

General Mark Milley: (04:22)
We must, we can, and we will do better. And we should all be proud that the vast majority of protests have been peaceful. Peaceful protest means that American freedom is working. And I’m also proud of the response or a national guard forces who provided excellent support to local law and state enforcement under the control of state governors in more than 30 states across the country. We never introduced federal troops in the streets of America as a result of the combined efforts of the national guard and law enforcement at quelling the violence and deescalating, very, very tense situations.

General Mark Milley: (05:02)
We all know that our system in the United States is imperfect. Full of passionate debate and continually evolving. And we in the military will continue to protect the rights and freedoms of all the American people. The foundational value that underpins American rights embedded in the Constitution is that all people, no matter who you are, are born free and equal. And I want to address this value in the context of our military. Our military has a mixed record on equality. We fought World War II with a racially segregated military. The Tuskegee Airmen are just one example of courageous men who fought for freedoms they themselves did not enjoy at home. Racial segregation of the armed forces ended in 1948. And today the military has come to reflect the diversity of our nation, the strength of our nation.

General Mark Milley: (06:00)
In recent decades, millions of soldiers, sailors, airmen, marines, and coast guardsmen have been part of cohesive teams, consisting of people of different races, genders, religions, and orientations. Working to accomplish their mission in peace and war all over the globe. Our troops demonstrate every day, their ability to thrive as a result of the diversity. The diversity of America is one of the core strengths of our nation. And it is therefor a core strength of our military. And while the military sets an example for civil society through our inclusiveness, we too have not come far enough. We all need to do better.

General Mark Milley: (07:45)
So what can we do? We will collectively take a hard look at how we recruit, retain and promote talent within our services. We must ensure that diverse candidates have equal opportunity to branch into the career fields and serve in the key positions most likely to produce our future senior leaders. And we must ensure fairness and equity at all key gateway selection boards, including promotion, command and War College. We must take advantage of the diversity committees, the councils and the offices in each of the services to identify best practices in talent management and act on them.

General Mark Milley: (08:21)
Mentorship also plays a vital role. All of us in the military must engage in more meaningful mentoring today. So how do you do that? As senior leaders, we reach down into the pool of rising stars among our troops from all walks of life and put into action what you’ve learned in your career. None of us got to where we are by ourselves. We all have had a helping hand. Take an active interest in providing the next generation of leaders the tools they need to succeed and be inclusive. Make a commitment to seek out and surround yourself with those who don’t look like you, think like you and who come from different backgrounds. Specifically reach out to junior officers and enlisted members whose background is different than yours and mentor them. It may be uncomfortable at first, but you will help them grow in the future leaders. And they will help you grow to be a better leader yourself.

General Mark Milley: (09:15)
Equality and opportunity is a matter of readiness. It’s the basis of cohesion. We fight wars as teams, and we cannot tolerate anything that divides us. Let me conclude with two simple pieces of advice, based on 40 years in uniform, that you may find useful as many of you will surely go on to be flag officers. First, always maintain a keen sense of situational awareness. As senior leaders, everything you do will be closely watched, and I am not immune. As many of you saw the result of the photograph of me at Lafayette Square last week, that sparked a national debate about the role of the military in civil society. I should not have been there. My presence in that moment and in that environment created a perception of the military involved in domestic politics. As a commissioned uniformed officer, it was a mistake that I’ve learned from, and I sincerely hope we all can learn from it.

General Mark Milley: (10:16)
We who were the cloth of our nation come from the people of our nation. And we must hold dear the principle of an apolitical military that is so deeply rooted in the very essence of our republic. And this is not easy. It takes time and work and effort, but it may be the most important thing each and every one of us does every single day. And my second piece of advice is very simple. Embrace the Constitution, keep it close to your heart. It is our North Star. It’s our map to a better future. Though we are not a perfect union, believe in the United States, believe in our country, believe in your troops. And believe in our purpose. Few other nations have been able to change for the greater good. And that is because of the rights and values embedded in our Constitution.

General Mark Milley: (11:10)
The freedoms guaranteed to us in the Constitution allow people to demand change just as the peaceful protesters are doing all across the country. That is why we serve in the military. On day one, you and I, we all, we all swore an oath to support and defend the Constitution. And it’s essential American principle that all men and women are born free and equal. That is the foundation of our military ethos, who we are as service members and as an institution. All of us in uniform are willing to die for that idea, the idea that is America. And so we must also be willing to live for that idea, for freedom of speech, freedom of the press, freedom to peacefully assemble. And freedom to vote and freedom to believe as you wish in your religion.

General Mark Milley: (12:00)
These are essential freedoms that are the cornerstone of our country. Americans have spilled their blood to protect them in the past and they continue to be worth fighting for. This we will defend. As you graduate today, you are entering an increasingly dynamic complex world that needs your leadership. Reflect on the past year and what you’ve learned about the current security environment. Great power competition and our global responsibilities, but also reflect on what you have witnessed over the past two and a half weeks. What it means to all of us as Americans, what it means to you and I as leaders.

General Mark Milley: (12:40)
I have complete confidence in each and every one of you to lead when and where needed. To make sure we grow and prove and remain the best military organization in the world. Together, our actions and words in the military will demonstrate that our differences do not divide us, but only make us stronger. Again, congratulations to each of you and well done on a year of hard study. And we look forward to seeing you in the senior officer ranks shortly. We all, all of us need your leadership.