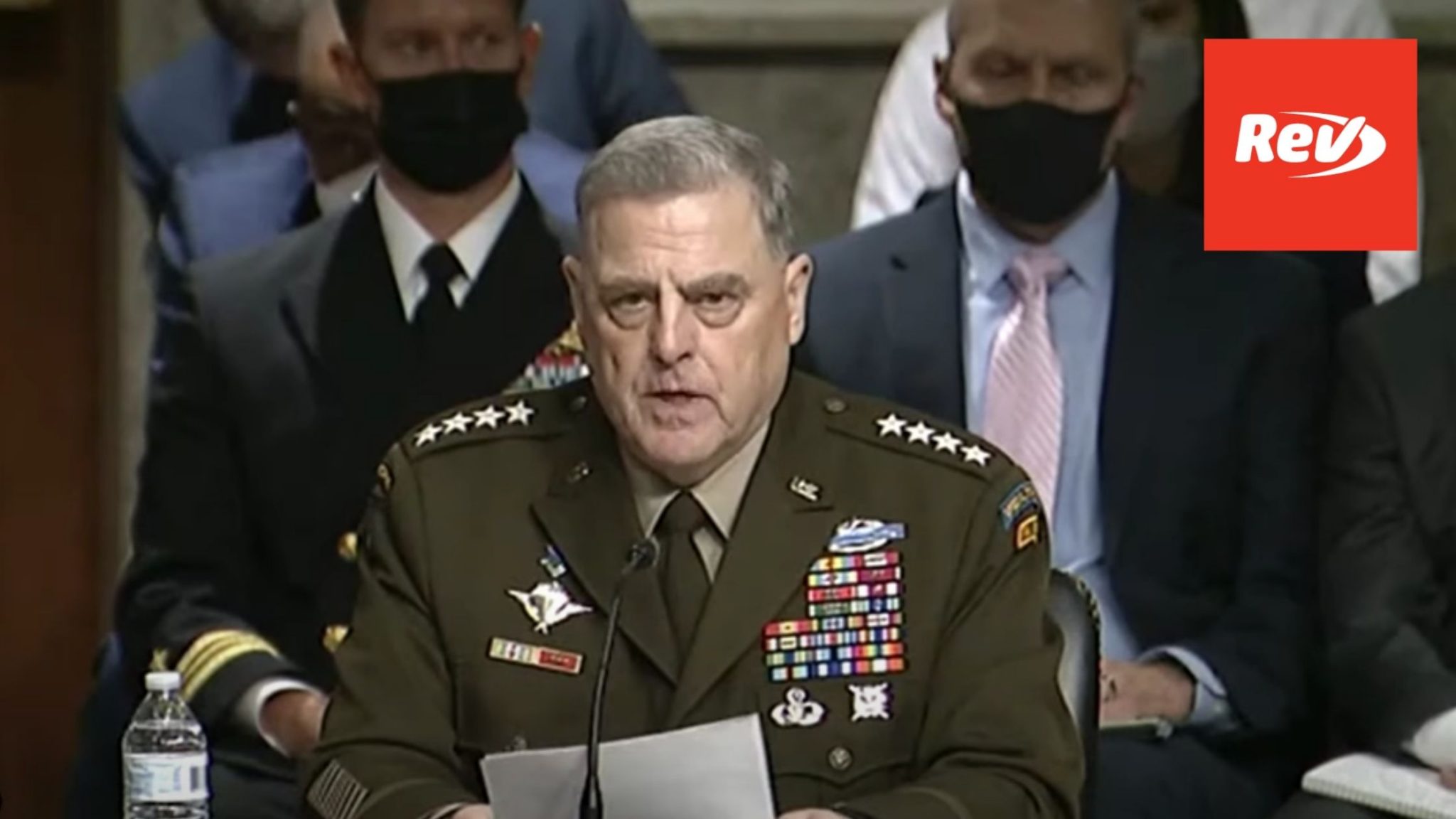 General Mark Milley, Chairman of the Joint Chiefs of Staff, testified about his calls with China over concerns about Donald Trump during a hearing on September 28, 2021. Read the transcript of the testimony here.

General Milley: (00:01)
Thank you chairman, and if I could, I know that there’s some issues in the media that are of deep concern to many members on the committee and with your permission, I’d like to address those for a minute or two. Again, I’ve submitted memoranda for the committee to take a look at.

General Milley: (00:19)
Mr. Chairman, I’ve served this nation for 42 years. I’ve spent years in combat and I’ve buried a lot of my troops who died while defending this country. My loyalty to this nation, its people and the constitution, hasn’t changed and will never change as long as I have a breath to give. My loyalty is absolute and I will not turn my back on the fallen. With respect to the Chinese calls, I routinely communicated with my counterpart, General Lee, with the knowledge and coordination of civilian oversight. I am specifically directed to communicate with the Chinese by Department of Defense guidance, the policy dialogue system.

General Milley: (01:04)
These military to military communications at the highest level are critical to the security of the United States in order to deconflict military actions, manage crisis and prevent war between great powers that are armed with the world’s most deadliest weapons. The calls on 30 October and 8 January were coordinated before and after with Secretary Esper and acting secretary Miller’s staffs and the inter agency.

General Milley: (01:32)
The specific purpose of the October and January calls were to generate, or were generated, by concerning intelligence, which caused us to believe the Chinese were worried about an attack on them by the United States. I know, I am certain, that President Trump did not intend to attack the Chinese and it is my directed responsibility, and it was my directed responsibility by the Secretary, to convey that intent to the Chinese. My task at that time was to deescalate.

General Milley: (02:08)
My message again, was consistent. Stay calm, steady, and deescalate. We are not going to attack you. At Secretary of Defense Esper’s direction, I made a call to General Lee on 30 October. Eight people sat in that call with me and I read out the call within 30 minutes of the call ending. On 31 December, the Chinese requested another call with me. The deputy assistant secretary of defense for Asia Pacific policy helped coordinate my call, which was then scheduled for 8 January and he made a preliminary call on 6 January.

General Milley: (02:47)
11 people attended that call with me and readouts of this call were distributed to the inter agency that same day. Shortly after my call ended with General Lee, I personally informed both Secretary of State Pompeo and White House Chief of Staff Meadows about the call among other topics. Soon after that, I attended a meeting with acting secretary Miller, where I briefed him on the call.

General Milley: (03:12)
Later that same day on 8 January, Speaker of the House Pelosi called me to inquire about the President’s ability to launch nuclear weapons. I sought to assure her that nuclear launch is governed by a very specific and deliberate process. She was concerned and made various personal references characterizing the President. I explained to her that the President is the nuclear launch authority and he doesn’t launch them alone and that I am not qualified to determine the mental health of the President of the United States.

General Milley: (03:51)
There are processes, protocols and procedures in place, and I repeatedly assured her that there was no chance of an illegal, unauthorized or accidental launch. By presidential directive and secretary of defense directives, the Chairman is part of the process to ensure the president is fully informed when determining the use of the world’s deadliest weapons. By law, I am not in the chain of command and I know that. However, by presidential directive and DOD instruction, I am in the chain of communication to fulfill my legal statutory role as the President’s primary military advisor.

General Milley: (04:30)
After the speaker Pelosi call, I convened a short meeting in my office with key members of my staff to refresh all of us on the procedures, which we practiced daily at the action officer level. Additionally, I immediately informed acting secretary of defense Miller of speaker Pelosi’s phone call. At no time was I attempting to change or influence the process, usurp authority or insert myself in the chain of command, but I am expected, I am required to give my advice and ensure that the President is fully informed on military matters.

General Milley: (05:10)
I am submitting for the record, a more detailed unclassified memorandum that I believe you all now have, although late. And I welcome a thorough walkthrough on every single one of these events, and I’d be happy in a classified session to talk in detail about the intelligence that drove these calls. I’m also happy to make available any email, phone logs, memoranda, witnesses, or anything else you need to understand these events.

General Milley: (05:33)
My oath is to support the constitution of the United States of America against all enemies, foreign and domestic and I will never turn my back on at oath. I firmly believe in civilian control of the military as a bedrock principle, essential to the health of this Republic and I’m committed to ensuring that the military stays clear of domestic politics.

General Milley: (05:54)
I look forward to your questions and thank you, Chairman, for the extra time.