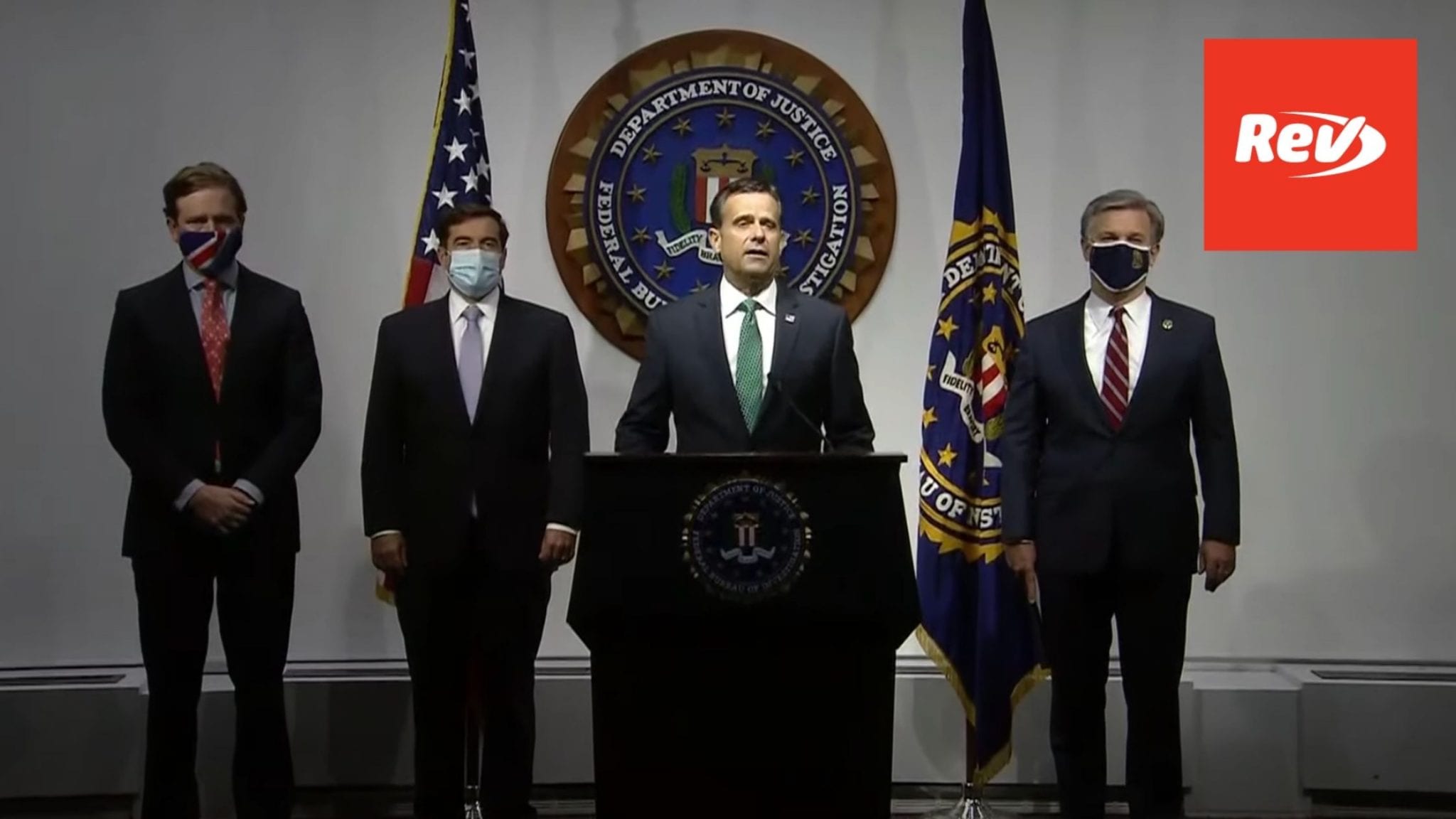 Director of National Intelligence John Ratcliffe, FBI Director Chris Wray, and more U.S. officials held a news conference where they said Iran and Russia are taking “specific actions” to influence & interfere in U.S. elections, and some voter registration information has been obtained by the two countries. Read the full transcript here.

John Ratcliffe: (00:00)
Good evening. The president has instructed the intelligence and law enforcement communities to ensure that the 2020 elections are the safest and most secure in our nation’s history. We take that mandate and responsibility seriously. There is nothing more sacred in our republic than the fundamental democratic principle of one person one vote.

John Ratcliffe: (00:24)
It is our duty to ensure the sanctity of US elections. That included ensuring the security of voting systems. The intelligence community’s role is to identify threats and to assess the intentions, capabilities and actions of foreign adversaries.

John Ratcliffe: (00:44)
Our duty also includes empowering the American people to understand information or perhaps more accurately disinformation that they are seeing, particularly on the internet, and make informed decisions for themselves. With that in mind, we will like to alert the public that we have identified that two foreign actors, Iran and Russia have taken specific actions to influence public opinion relating to our elections.

John Ratcliffe: (01:18)
First, we have confirmed that some voter registration information has been obtained by Iran, and separately by Russia. This data can be used by foreign actors to attempt to communicate false information to registered voters that they hope will cause confusion, so chaos and undermine your confidence in American democracy.

John Ratcliffe: (01:44)
To that end, we have already seen Iran sending spoofed emails, designed to intimidate voters, insight social unrest, and damage President Trump. You may have seen some reporting on this in the last 24 hours, or you may have even been one of the recipients of those emails.

John Ratcliffe: (02:05)
Additionally, Iran is distributing other content to include a video that implies that individuals could cast fraudulent ballots, even from overseas. This video, and any claims about such allegedly fraudulent ballots are not true. These actions are desperate attempts by desperate adversaries. Even if the adversaries pursue further attempts to intimidate or attempt to undermine voter confidence, know that our election systems are resilient and you can be confident your votes are secure.

John Ratcliffe: (02:47)
Although we have not seen the same actions from Russia, we are aware that they have obtained some voter information just as they did in 2016. Rest assured that we are prepared for the possibility of actions by those hostile to democracy. The great women and men of the intelligence community caught this activity immediately, and our colleagues at FBI and DHS acted swiftly in response to this threat.

John Ratcliffe: (03:21)
We are standing before you now to give you the confidence that we are on top of this, and providing you with the most powerful weapon we have to combat these efforts. The truth, information. We ask every American to do their part, to defend against those who wish us harm. The way you do that is quite simple, do not allow these efforts to have their intended effect. If you receive an intimidating or manipulative email in your inbox, don’t be alarmed and do not spread it.

John Ratcliffe: (04:00)
This is not a partisan issue. I’ve had conversations today with members of Congress from both sides of the aisle, and there is complete unanimity in the US government in our resolve to combat the enemies of freedom. The president has instructed me to keep the public informed as appropriate, and you have my commitment that I will continue to do exactly that, with transparency and with candor.

John Ratcliffe: (04:31)
We will not tolerate foreign interference in our elections. And we will continue to work with our many partners to disrupt and to impose costs and consequences on any adversary that attempts to interfere in our democratic processes. The efforts of the president to empower us, to put towards election security over these last four years are working. I’ll now turn it over to my colleague, Director Wray of the FBI to address law enforcement’s activities.

Chris Wray: (05:09)
Thanks, John. The FBI is the primary agency responsible for investigating malicious cyber activity against election infrastructure, maligned foreign influence operations and election related crimes, like voter fraud and voter suppression or intimidation, and that’s exactly what we’ve been doing.

Chris Wray: (05:32)
At the FBI we’re working closely with our intelligence community partners, as well as our other federal state and local partners to share information, bolster security and identify and disrupt any threats.

Chris Wray: (05:46)
We are not going to tolerate foreign interference in our elections or any criminal activity that threatens the sanctity of your vote or undermines public confidence in the outcome of the election.

Chris Wray: (05:59)
When we see indications of foreign interference or federal election crimes, we’re going to aggressively investigate and work with our partners to quickly take appropriate action. We’re also coordinating with the private sector, both technology and social media companies to make sure that their platforms aren’t used by foreign adversaries to spread disinformation and propaganda.

Chris Wray: (06:24)
We’ve been working for years as a community to build resilience in our election infrastructure, and today that infrastructure remains resilient. You should be confident that your vote counts.

Chris Wray: (06:37)
Early unverified claims to the contrary should be viewed with a healthy dose of skepticism. We encourage everyone to seek election and voting information from reliable sources, namely your state election officials, and to be thoughtful, careful, and discerning consumers of information online.

Chris Wray: (07:00)
And if you suspect criminal activity, we ask that you report that information to your local FBI field office. As always, the men and women of the FBI remain committed to protecting the American people, our democracy, and the integrity of our elections. We are not going to let our guard down. Thank you.