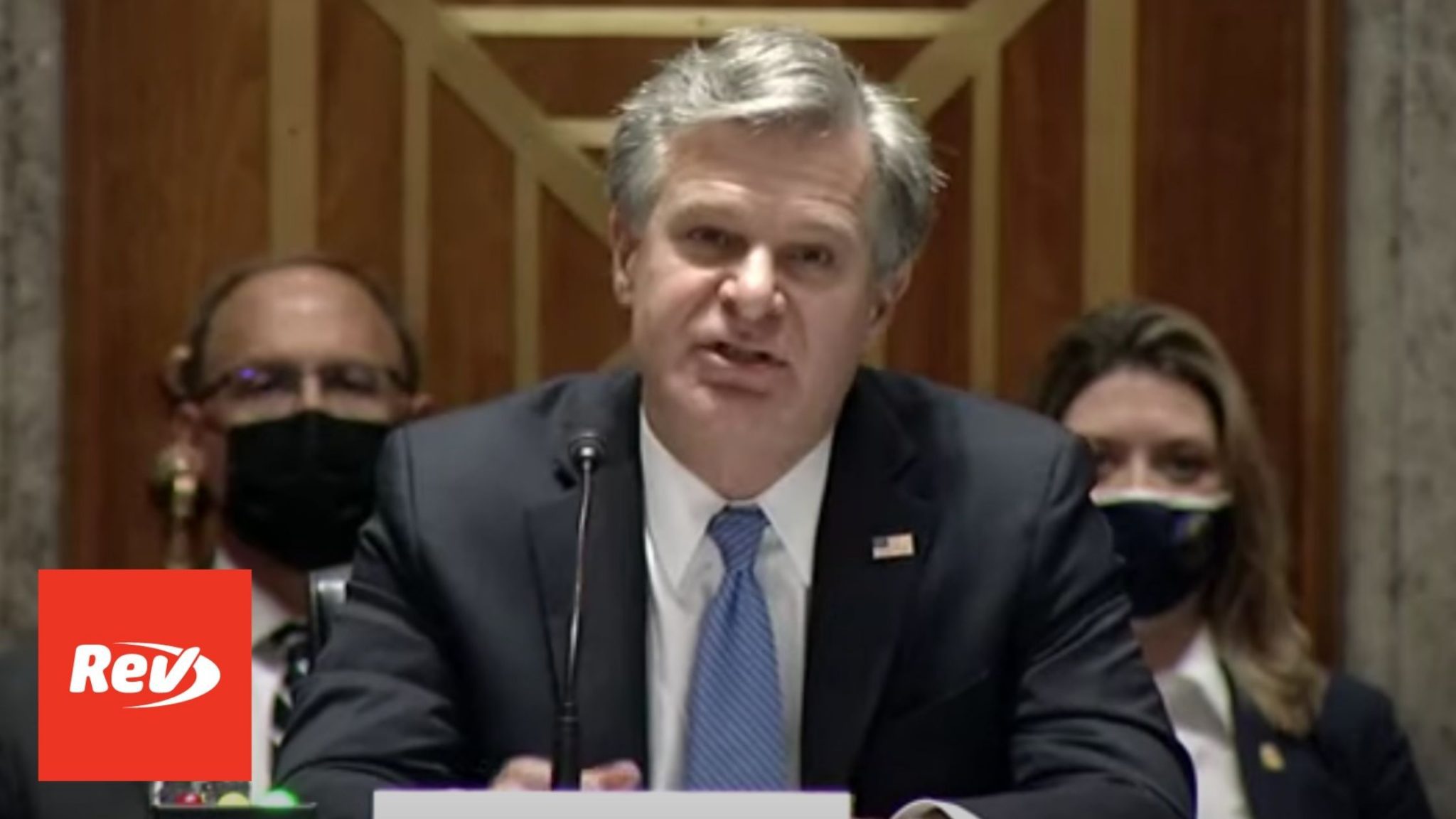 FBI Director Chris Wray said that the number of U.S. domestic terrorism cases has more than doubled in the past 16-18 months during his opening statement on September 21. Read the transcript of his remarks during the “Threats to the Homeland: Evaluating the Landscape 20 Years After 9/11” hearing here.

Christopher Wray: (00:00)
Thank you. And good morning, Chairman Peters, Ranking Member Portman, members of the committee. I’m honored to be here today to discuss the threats facing our Homeland. A week and a half ago we marked a somber really sacred anniversary in this country, 20 years since the September 11th attacks. September 11th reminds us of evil and loss, the nearly 3000 victims taken from us that day and their families. But 9/11 also reminds us of sacrifice and selflessness of common purpose. It reminds us of the first responders and everyday heroes, and all those who suffered illness as a result of their selfless work after the attacks, including members of our FBI family. And still two decades later, our response to September 11th and the lessons learned from those attacks drive our approach to combating all the threats Americans face today. It was 9/11 after all that turned the FBI into an agency focused on disrupting threats, and taught us how to build deeper, more effective partnerships, both here at home and around the world.

Christopher Wray: (01:21)
And good thing we made those changes, because as we’ll discuss this morning, there’s no shortage of dangers to defend against, just a flavor before we even get to terrorism. On the cyber front, we’re now investigating over 100 different types of ransomware, each with scores of victims. And that’s on top of hundreds of other national security and criminal cyber threats we’re working against every day. In our violent crime work, we recently arrested over 600 gang members in a single month. That’s just one month. Protecting our nation’s innovation, we are opening a new China counter intelligence investigation every 12 hours. And every day we receive thousands of tips into our National Threat Operation Center, many of which involve imminent threats to life requiring swift action. Now the list goes on and on. I’m not going to have time to discuss most of them before we get started, but I do want to spend a few minutes on terrorism and the challenges facing those protecting against it.

Christopher Wray: (02:32)
Preventing terrorist attacks remains our top priority, both now and for the foreseeable future. Today, the greatest terrorist threat we face here in the U.S. is from what are in effect lone actors. Because they act alone and move quickly from radicalization to action, often using easily obtainable weapons against soft targets, these attackers don’t leave a lot of dots for investigators to connect and not a lot of time in which to connect them. We continue to see individuals radicalized here at home by Jihadist ideologies espoused by foreign terrorist organizations, like ISIS and Al-Qaeda, what we would call home grown violent extremists. But we’re also countering lone domestic violent extremists radicalized by personalized grievances, ranging from racial and ethnic bias, to anti-government, anti-authority sentiment, to conspiracy theories. There is no doubt about it, today’s threat is different from what it was 20 years ago, and it’ll almost certainly continue to change.

Christopher Wray: (03:44)
And to stay in front of it, we’ve got to adapt too. And that’s why over the last year and a half, the FBI has pushed even more resources to our domestic terrorism investigations. Since the spring of 2020, so the past 16, 18 months or so, we’ve more than doubled our domestic terrorism caseload from about 1,000 to around 2,700 investigations. And we’ve surged personnel to match, more than doubling the number of people working that threat from a year before. But we’re also surging against threats by foreign terrorist organizations, like ISIS, Al-Qaeda and AL-Shabaaab. Their operatives continue to look for vulnerabilities and have not stopped trying to carry out large scale attacks against us. And we are certainly watching the evolving situation in Afghanistan.

Christopher Wray: (04:43)
Now 9/11 was 20 years ago, but for us at the FBI, as I know it does for my colleagues here with me, it represents a danger we focus on every day. And make no mistake, the danger is real. Our adversaries are committed and they’re hoping to succeed just once, while we’re working to bat a thousand. So we are working with our partners to identify and stop would be attackers before they act. Just within the past couple of years, we’ve thwarted potential terrorist attacks in areas like Las Vegas, Tampa, New York, Cleveland, Kansas City, Miami, Pittsburgh and elsewhere. Now we’re proud of our successes, but we need to stay on the balls of our feet, relentlessly vigilant against the next plot by our adversaries and their next attempts to attack us, has been back battling the threat of terrorism and every other threat we face right through the teeth of a pandemic and rising danger to their own safety.

Christopher Wray: (05:51)
And I say that, because over the past year we have seen a sharp and deeply disturbing uptick in violence against the law enforcement community. In just the first eight months of this year, 52 law enforcement officers have been feloniously killed on the job. Just put that in context, that’s an officer murdered in this country every five days, and already more than it was in all of 2020. And of course, that doesn’t even count all those who’ve died in the line of duty facing the other inherent dangers of the job, much less the scores of agents, officers, analysts and other dedicated professionals who died from COVID-19. And we will be forever indebted for their bravery and sacrifice, and are bound and determined to honor them all through the way we approach our work, while we remain focused on our ultimate mission, protecting the American people and upholding the Constitution. So thank you for taking the time to hear from me today and I look forward to your questions.