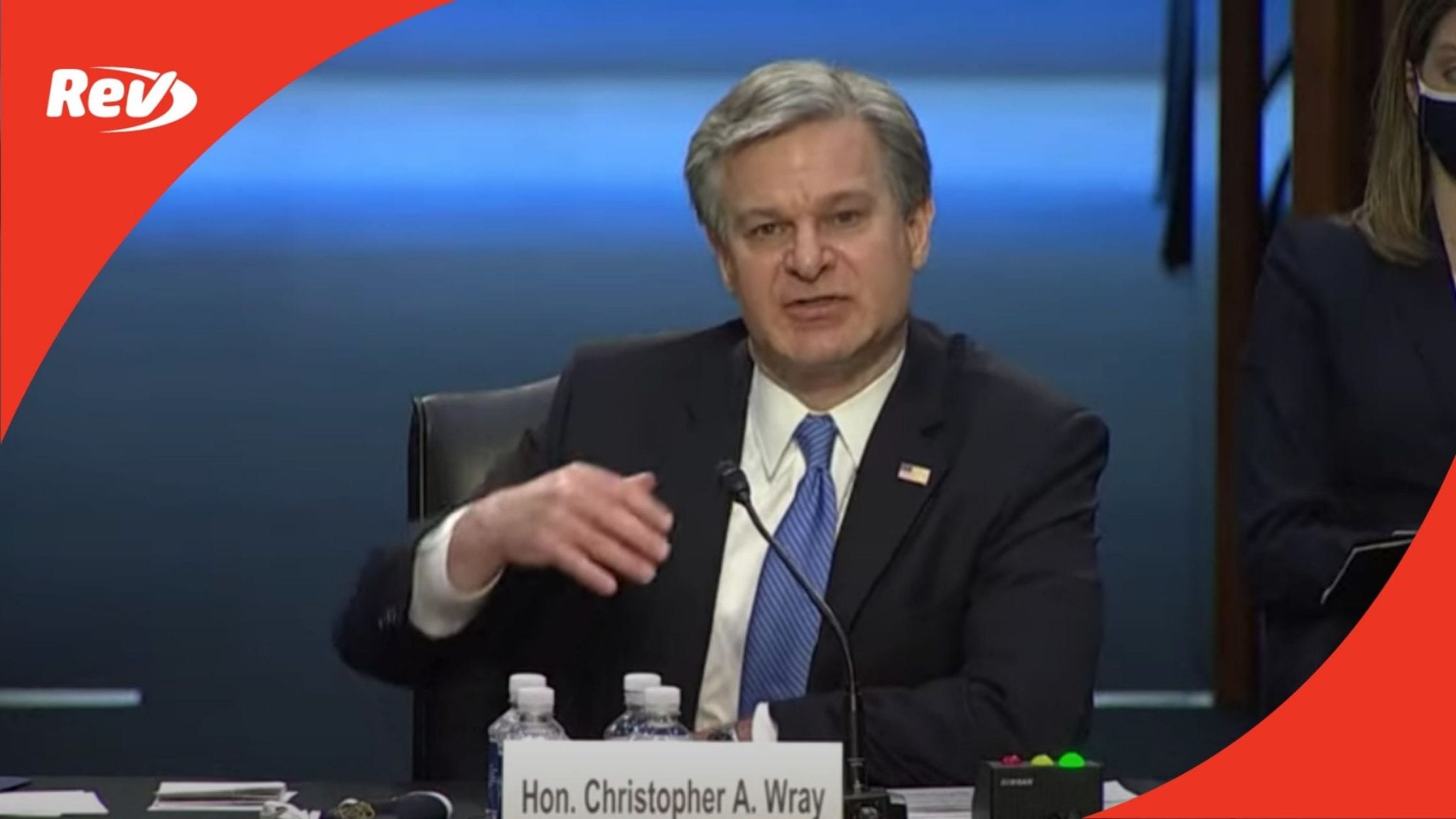 FBI Director Chris Wray testified on the January 6 Capitol Attack on March 2, 2021. He called the attack an act of domestic terrorism. Read the transcript of the full opening statement speech here.

Christopher Wray: (00:07)
So good morning, Chairman Durbin, Ranking Member Grassley, members of the committee. I appreciate the opportunity to be here today to talk about the great work of the men and women of the FBI.

Christopher Wray: (00:18)
Let me start with a quick update on the investigation into the January 6th attack here at the Capitol. I was appalled, like you, at the violence and destruction that we saw that day. I was appalled that you, our country’s elected leaders were victimized right here in these very halls. That attack, that siege, was criminal behavior, plain and simple and it’s behavior that we, the FBI view as domestic terrorism. It’s got no place in our democracy and tolerating it would make a mockery of our nation’s rule of law.

Christopher Wray: (00:57)
The rule of law, of course, is our country’s bedrock and it’s our guiding principle at the FBI. That’s why the FBI has been working day and night across the country, to track down those responsible for the events of January 6th and to hold them accountable. We’re chasing down leads. We’re reviewing evidence, combing through digital media to identify, investigate, and arrest anyone who broke the law that day. And our greatest partner in this investigation has been the American people themselves, your constituents.

Christopher Wray: (01:32)
Citizens from around the country have sent us more than 270,000 digital media tips. Some have even taken the painful step of turning in their friends or their family members. But with their help, we’ve identified hundreds of suspects and open hundreds of investigations in all but one of our 56 field offices. And of those identified, we’ve arrested already more than 270 individuals to date; over 300 when you include the ones of our partners, with more subjects being identified and charged just about every single day.

Christopher Wray: (02:09)
The FBI is committed to seeing this through no matter how many people it takes or how long or the resources we need to get it done. Because as citizens, in a sense, we’re all victims of the January 6th assault and the American people deserve nothing less.

Christopher Wray: (02:26)
Unfortunately, as you noted, Mr. Chairman, January 6th was not an isolated event. The problem of domestic terrorism has been metastasizing across the country for a long time now and it’s not going away anytime soon. At the FBI, we’ve been sounding the alarm on it for a number of years now. I’ve been sounding the alarm about domestic terrorism since I think just about my first month on the job, when I first started appearing up on the Hill and I’ve spoken about it in maybe a dozen different congressional hearings.

Christopher Wray: (02:57)
So whenever we’ve had the chance, we’ve to emphasize that this is a top concern and remain so, for the FBI. In fact, we viewed it as such a critical threat that back in June of 2019, under my leadership, we elevated racially and ethnically motivated violent extremism, to our highest threat priority, on the side level with ISIS and homegrown violent extremists, where it remains to this day.

Christopher Wray: (03:27)
Now, I’m sure we’re going to cover a lot of ground today, but let me make one thing clear. The FBI will not tolerate agitators and extremists who plan or commit violence. Period. And that goes for a violent extremists as of any stripe. As I’ve said, many times, we do not investigate ideology, but we focus on acts of violence and violations of federal law and when we see those, when we see those, we will bring to bear the full weight of our resources, our experiences, and our partnerships. And when domestic violent extremists use explosive devices, when they attack government facilities and businesses, when they assault law enforcement officers, when they use violence to interfere with the lawful operation of our government, they should expect the FBI to come knocking on their door no matter where they try to run.

Christopher Wray: (04:22)
Now, of course, these are not the only issues the FBI is focused on every day and as I hope we’ll discuss in more detail this morning, we confront a wide variety of threats in countless other forms like the SolarWinds intrusions, which we’re working to investigate and counter with our intelligence, law enforcement and private sector partners, both here and abroad, not to mention in a huge range of other cyber threats from nation states, criminals and toxic combinations of the two. Like the vast, unrelenting counter-intelligence threat from China and of course the alarming threat of violence towards law enforcement officers; a threat that’s especially close to home here in the Capitol. The attack on January 6th, not only resulted in the injuries of over 100 law enforcement officers, but also the tragic death of US Capitol police officer Brian Sicknick in the line of duty.

Christopher Wray: (05:17)
The threat of violence to law enforcement is also deeply personal for us at the FBI. Just one month ago today, two of our special agents, Laura Schwartzenberger and Dan Alfin, were tragically killed in the line of duty and four more of our agents shot or wounded, all while serving a search warrant. And I can tell you, that there is nothing, nothing more devastating, more heartbreaking than the loss of our own. The loss of two special agents who not only bravely did what I consider one of the hardest jobs in the FBI, investigating crimes against children, but who were also each parents of young children themselves, of their own. A wife, a husband, and cherished members of their communities. And I know a number of members of Congress, including a number on this committee, reached out and offered their condolences and offerings of support and I want you to know how much that means to the FBI and how much it means to me personally.

Christopher Wray: (06:23)
Special agents Laura Schwartzenberger and Dan Alfin sacrificed their lives that day, like far too many of our law enforcement brethren, also killed in the line of duty. Their ultimate sacrifice was not in vain. It was to protect the American people. It was to protect each of us and it’s why no matter what comes our way, our work to safeguard the rule of law, to protect the American people and to uphold the Constitution, goes on and we’ll never stop.

Christopher Wray: (06:55)
Thank you for the opportunity to speak with you today. I look forward to answering your questions.

Mr. Durbin: (06:59)
Thanks director. We’ll have a seven minute rounds for the members to ask questions.