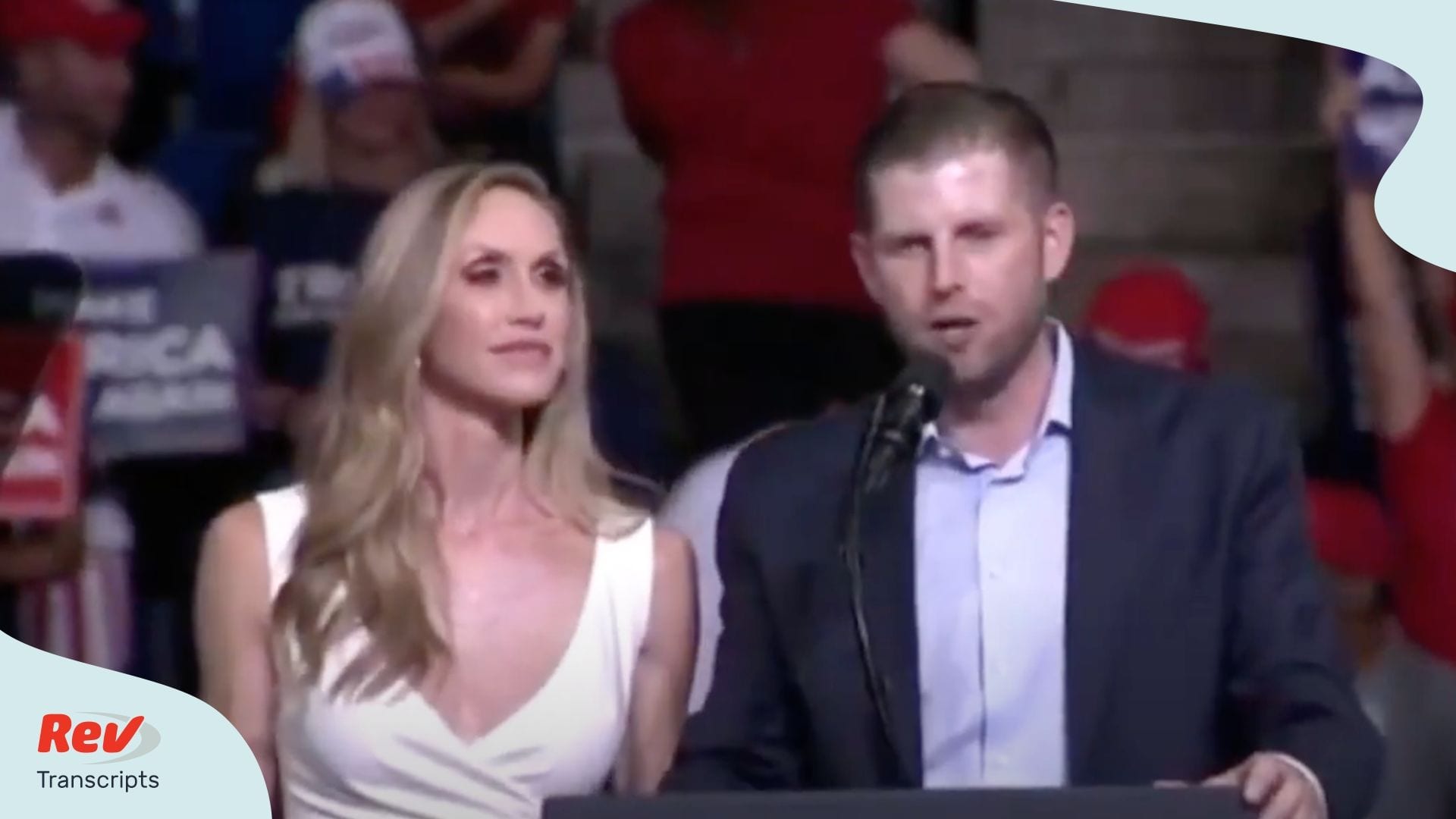 Eric Trump, son of Donald Trump, spoke at Donald Trump’s Tulsa rally on June 20. He called protestors “animals” and said the first debate between Joe Biden and President Trump would be a “bloodbath.” Read the transcript here.

Eric Trump: (00:00)
Absolutely love you Oklahoma, and you know the greatest part about this rally already? The build the wall suit is back. Stand up.

Eric Trump: (00:15)
Everywhere we went, all over the country, that suit followed every single place we went and we love you. You know what? My father is building the wall and they’re building a lot of wall.

Eric Trump: (00:46)
You know it’s amazing how hard my father is fighting. It’s amazing how hard he fights every single day for America. Because these people back here won’t give him a chance. They are the most dishonest people in the entire world, but despite that, he’s winning. He’s winning every single day and I have never been more proud of the man. He is doing such a great job for this country. Oh we’re going to get four more years, trust me. You know when you’re going to get four more years? We’re going to get it right now because you see the enthusiasm here, but I cannot wait for this first debate because it is going to be an absolute bloodbath. Sleepy Joe, he doesn’t stand a chance. He really doesn’t stand a chance and you know what? It’s amazing to watch the media protect him. He’s literally in his basement right now. No one’s seen the guy in … It’s been 79 days, 79 days since he’s had a press conference, 79. If they don’t see my father for three minutes, they’re complaining that he’s not being “transparent”. Joe Biden hasn’t been out in 79 days and the media gives him a complete pass, but guess what?

Eric Trump: (02:22)
I love it. Guess what guys? He’s going to have to come out because there’s three debates, you know what, and my father wants more. He keeps on saying, “Sleepy Joe, I want more debates. I don’t just want three. I want more debates.” His campaign yesterday says no. You would think these guys would want it, it’s going to be the best ratings you’ve ever seen on … If you thought it was bad with Hillary Clinton, wait till you see the debates with Sleepy Joe. I promise it’s going to be absolutely incredible. The guy like a month ago comes out, he goes, “Ladies and gentlemen, I am thrilled to announce that I’m running for senate.” I go, “Wait a second, this has to be like an old clip, right?” “I am running for the United States Senate.” I go, “This has to be like 10 years old.” No, that was like two days ago, meaning he didn’t know the office in the United States that he was running for and this is a person that the media and the Democrats are propping up to be the commander in chief. It’s really an incredible thing.

Eric Trump: (03:29)
Guys, you know what? We’re going to win, and honestly, it doesn’t matter at the end of the day so long as we win in November and I promise you we will win. Guys, I promise you. There is no family that will work harder than ours. We will not sleep and I know you won’t sleep. We will win this together. Thank you. God bless you too. You know, we’re going to keep the moral fabric of this country because when you watch the nonsense on TV, when you see these animals literally taking over our cities, burning down churches, this isn’t America. That’s not what Americans do, you know what? They represent the smallest fraction of our society because you know what? We have the greatest people in the world in this country and they universally do not like that kind of behavior.

Eric Trump: (04:35)
You know what? We’re going to protect religious liberty, another thing that is massively assaulted in this nation. We are going to say Merry Christmas which was totally under assault. My father will keep In God We Trust on the U.S. currency, that much I promise you. We are going to protect the Second Amendment, something that’s very, very, very, very important to me. Guys, as the father of two beautiful kids, in fact it’s Father’s Day … Are you doing anything exciting for me for Father’s Day?

Eric Trump: (05:19)
Guys, she better have something great planned for it. Do you have anything good planned for me for Father’s Day, honey?

Eric Trump: (05:25)
I’m expecting something really big. Or I might just want to be left alone because kids are a lot of work, but you better be doing something nice for Father’s Day, honey. But guys, I promise, we’re going to win and my father is going to continue to make you proud and we as a family are going to work 24/7 and we love you and we’re honored to be here and we’re going to Keep America Great. Thank you very much guys. Thank you. Thank you guys. Thank you. You better be in every single one of them.