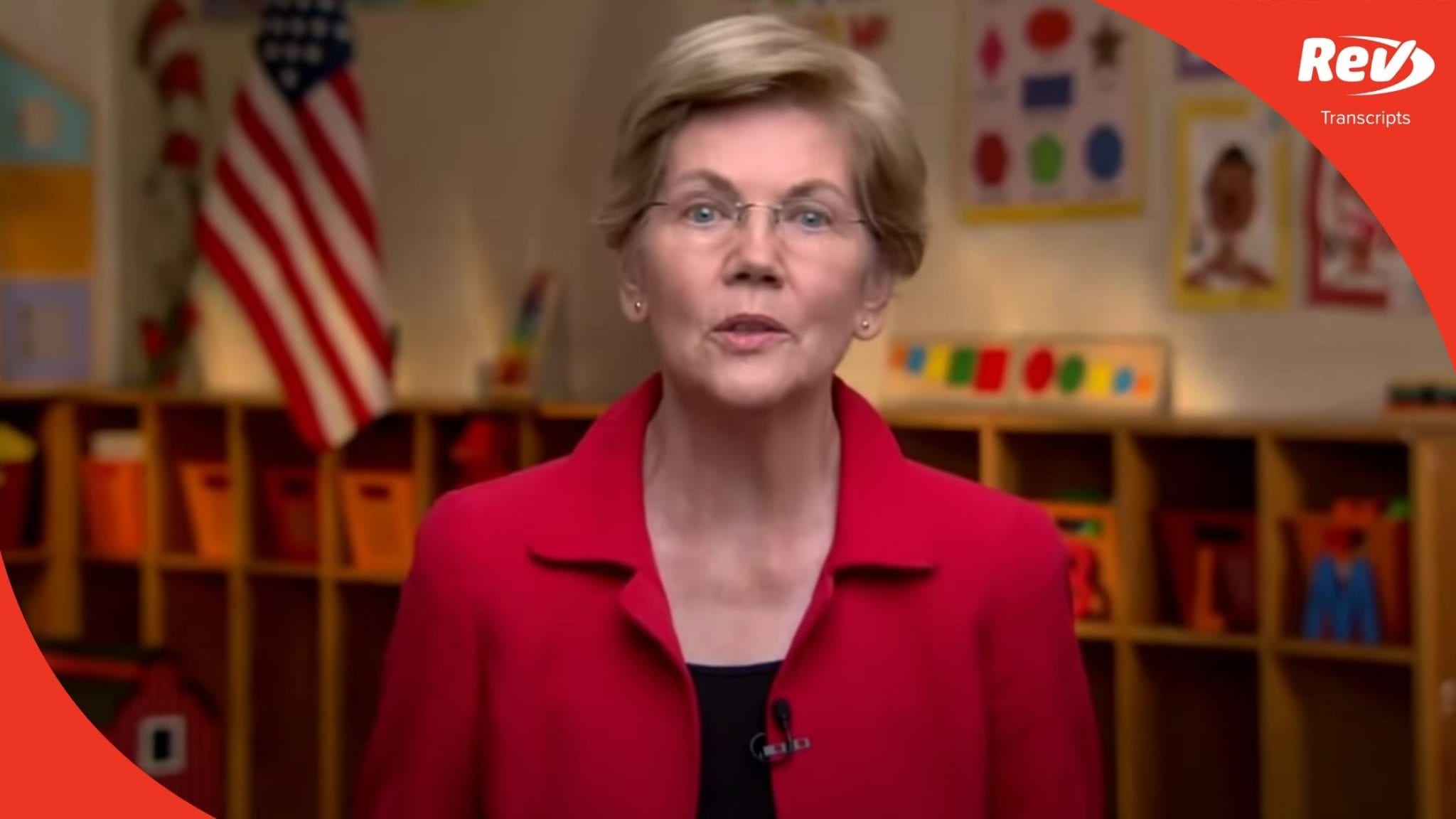 Elizabeth Warren: (00:01)
Tonight, we’ve heard from the people who make America work, people who put their lives on the line to keep our country going. And since COVID-19 hit, they’ve taken one gut punch after another. And what is the COVID fallout done to our babies? Well, I’m here at the early childhood education center in Springfield, Massachusetts, which has been closed for months. Childcare was already hard to find before the pandemic and now parents are stuck. No idea when schools can safely reopen and even fewer childcare options. The devastation is enormous and the way I see it, big problems demand big solutions. Now, I love a good plan. And Joe Biden has some really good plans. Plans to bring back union jobs in manufacturing and create new union jobs in clean energy. Plans to increase social security benefits, cancel billions in student loan debt and make our bankruptcy laws work for families instead of the creditors who cheat them.

Elizabeth Warren: (01:07)
These plans reflect a central truth. Our economic system has been rigged to give bailouts to billionaires and kick dirt in the face of everyone else. But we can build a thriving economy by investing in families and fixing what’s broken. Joe’s plan to Build Back Better includes making the wealthy, pay their fair share, holding corporations accountable, repairing racial inequities and fighting corruption in Washington. Let me tell you about one of Joe’s plans that’s especially close to my heart, childcare. As a little girl growing up in Oklahoma, what I wanted most in the world was to be a teacher. I loved teaching. And when I had babies and was juggling my first big teaching job down in Texas, it was hard, but I could do hard. The thing that almost sank me, childcare. One night, my Aunt Bee called just to check in and I thought I was fine, but then I just broke down and started to cry.

Elizabeth Warren: (02:14)
I had tried holding it all together, but without reliable childcare, working was nearly impossible. And when I told Aunt Bee, I was going to quit my job, I thought my heart would break. And then she said the words that changed my life. “I can’t get there tomorrow, but I’ll come on Thursday.” And she arrived with seven suitcases and a Pekingese named Buddy and stayed for 16 years. I get to be here tonight because of my Aunt Bee. I learned a fundamental truth. Nobody makes it on their own. And yet here we are two generations of working parents later. And if you have a baby and don’t have an Aunt Bee you’re on your own. And here’s why that is wrong.

Elizabeth Warren: (03:03)
We build infrastructure like roads and bridges and communication systems so that people can work. That infrastructure helps us all because it keeps our economy going. It’s time to recognize that childcare is part of the basic infrastructure of this nation it’s infrastructure for families. Joe and Kamala will make high quality childcare affordable for every family, make preschool universal and raise the wages of every childcare worker. Now that’s just one plan, but it gives you an idea of how we get this country working for everyone.

Elizabeth Warren: (03:43)
Donald Trump’s ignorance and incompetence have always been a danger to our country. COVID-19 was Trump’s biggest test. He failed miserably. Today, america has the most COVID deaths in the world and an economic collapse, and both crises are falling hardest on Black and Brown families. Millions out of work, millions more trapped in cycles of poverty, millions on the brink of losing their homes, millions of restaurants and stores hanging by a thread. This crisis is bad and it didn’t have to be this way. This crisis is on Donald Trump and the Republicans who enable him. On November 3rd, we will hold them all accountable.

Elizabeth Warren: (04:34)
So whether you’re planning to vote wearing a mask or vote by mail, please take out your phone right now. And text vote to 30330. We all need to be in the fight to get Joe and Kamala elected. And after November, we all need to stay in the fight to get big things done. We stay in this fight so that when our children and our grandchildren ask what we did during this dark chapter, in our nation’s history, we will be able to look them squarely in the eye and say, “We organized, we persisted, and we changed America.”