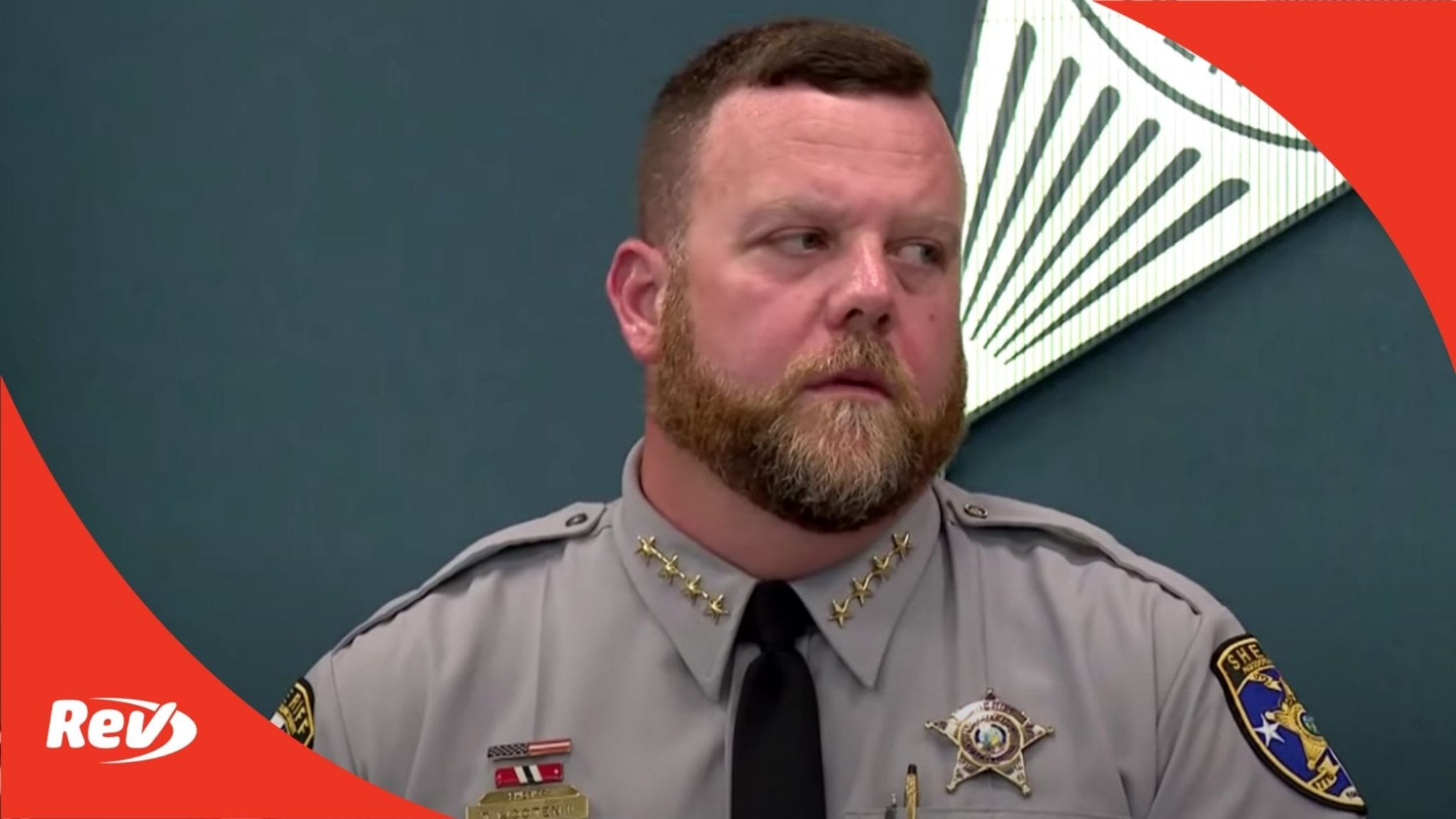 The Elizabeth City, North Carolina sheriff held a press conference on April 21, 2021 to address the fatal police shooting of Andrew Brown Jr. during a search warrant. Read the transcript of the news briefing speech here.

Sheriff Wooten: (00:53)
Good afternoon. I want to thank everybody for being here today on such short notice. I’m Tommy Wooten, the Sheriff of Pasquotank County. Joining me here today is District Attorney Andrew Womble, and North Carolina State Bureau of Investigation Special Agent Masha Rogers, to my right.

Sheriff Wooten: (01:13)
It’s been a tragic day, today. This started at approximately 8:30 AM, during a search warrant at 421 Perry Street by Pasquotank County Sheriff’s Deputies. Andrew Brown Jr. was fatally wounded during this search warrant. The North Carolina State Bureau of Investigation, an outside agency, was immediately contacted and is conducting this investigation. The Sheriff’s office has complete trust in the North Carolina State Bureau of Investigation, and its ability to complete this investigation. The Sheriff’s Office will be transparent, and take the proper actions based on the findings of the SBI’s investigation.

Sheriff Wooten: (02:03)
I have put together a team of local law enforcement to come to Pasquotank County, to ensure the safety and protection of the citizens in our community. I would like to personally thank the State Bureau of Investigations, Elizabeth City Police Department, Alcohol Law Enforcement, North Carolina Highway Patrol, and many other law enforcement agencies that are aiding in this effort. Thank you, and God bless. And at this time I’m going to turn the floor over to Special Agent Rogers.

Special Agent Rogers: (02:39)
Thank you, Sheriff. My name is Masha Rogers, M-A-S-H-A, R-O-G-E-R-S. I’m the Special Agent in charge for the Northeastern District of the State Bureau of Investigation.

Special Agent Rogers: (02:53)
The SBI was requested by the Pasquotank County Sheriff’s Office this morning, immediately after an incident in which officers of the Pasquotank County Sheriff’s Office, or deputies, were involved in a shooting. The SBI agents in our district deployed immediately, and began conducting interviews. We will conduct a thorough and complete investigation, utilizing all available resources. Our agents are fact finders, and at which time all interviews and casework are completed, we’ll turn our findings and our case file over to the District Attorney, District Attorney Womble, at which time he’ll make a determination about any criminal charges.

Special Agent Rogers: (03:30)
It’s very early in the investigation, so we will not be able to answer any questions about any of the details involved in this case. Thank you. District Attorney Womble.

District Attorney Womble: (03:45)
Good afternoon. As Special Agent Rogers stated, my name is Andrew Womble. I am the District Attorney for Pasquotank County, and several of the surrounding counties. And it is indeed a tragic day here in Pasquotank County. What we’re looking for at this time will be accurate answers, and not fast answers. We’re going to wait for the full and complete investigation performed by the North Carolina State Bureau of Investigation, their agents. And then we’ll review that, make any determinations that we deem appropriate at that time. What… This will not be a rush to judgment. We’re going to wait for that investigation, as we’re duty bound to do. Once again, as this is an active criminal investigation, I’m going to refrain from making comments about, or speculate, on facts or events that transpired this morning.

District Attorney Womble: (04:40)
Thank you for your time and your attention.

AUDIENCE: (04:50)
No questions at all? Can you tell us if it was one of your deputies who fired the gun? We heard it was a Dare County Deputy. Can you confirm that for me?

Sheriff Wooten: (04:58)
It was a Pasquotank County Sheriff’s Office Deputy.

AUDIENCE: (05:24)
Were there any other injuries, of civilians?

AUDIENCE: (05:55)
Were there other law enforcement agencies at the scene, when the warrant was executed?

Sheriff Wooten: (06:09)
That’ll come out in the investigation.

Sheriff Wooten: (06:14)
That also will come out during the investigation. Yeah, we’re not going to answer any questions about the investigation. We’re going to let the North Carolina SBI do their job and then, we’ll have further information later on.

AUDIENCE: (06:31)
Is there… When we see situations like this play out in other jurisdictions, sometimes the police are very proactive in wanting to show that to the public.

Sheriff Wooten: (06:41)
We are currently working that right now, as hard as we can. Yes. We will be transparent with this situation. Absolutely. We will.

Sheriff Wooten: (06:57)
I’m not a hundred percent sure on how long we’ve had them. We may have had them for about a year.

AUDIENCE: (07:12)
Sheriff, do you have an expected time that you may release the body camera footage?

Sheriff Wooten: (07:17)
I do not, right at this time. Again, like Special Agent Rogers stated, it is tremendously early in this investigation. But all these questions you’re asking, and I know you want all the answers to them, but they will come out. They will come out.

AUDIENCE: (07:29)
Sheriff, can you confirm that this was part of the drug task force, here in Northeast North Carolina, [inaudible 00:07:37] serving a drug warrant-

Sheriff Wooten: (08:30)
Like I stated earlier, the Sheriff’s Office trusts the ability of our North Carolina State Bureau of Investigations. And we will be transparent, and we will take the proper action based on the findings of that investigation.

AUDIENCE: (08:43)
Sheriff, can I have one more question? There was a lot of talk out there about a 14 year old who was shot at that scene, obviously that didn’t happen. But did you have a 14 year old get shot, a couple of blocks over this morning, in the city?