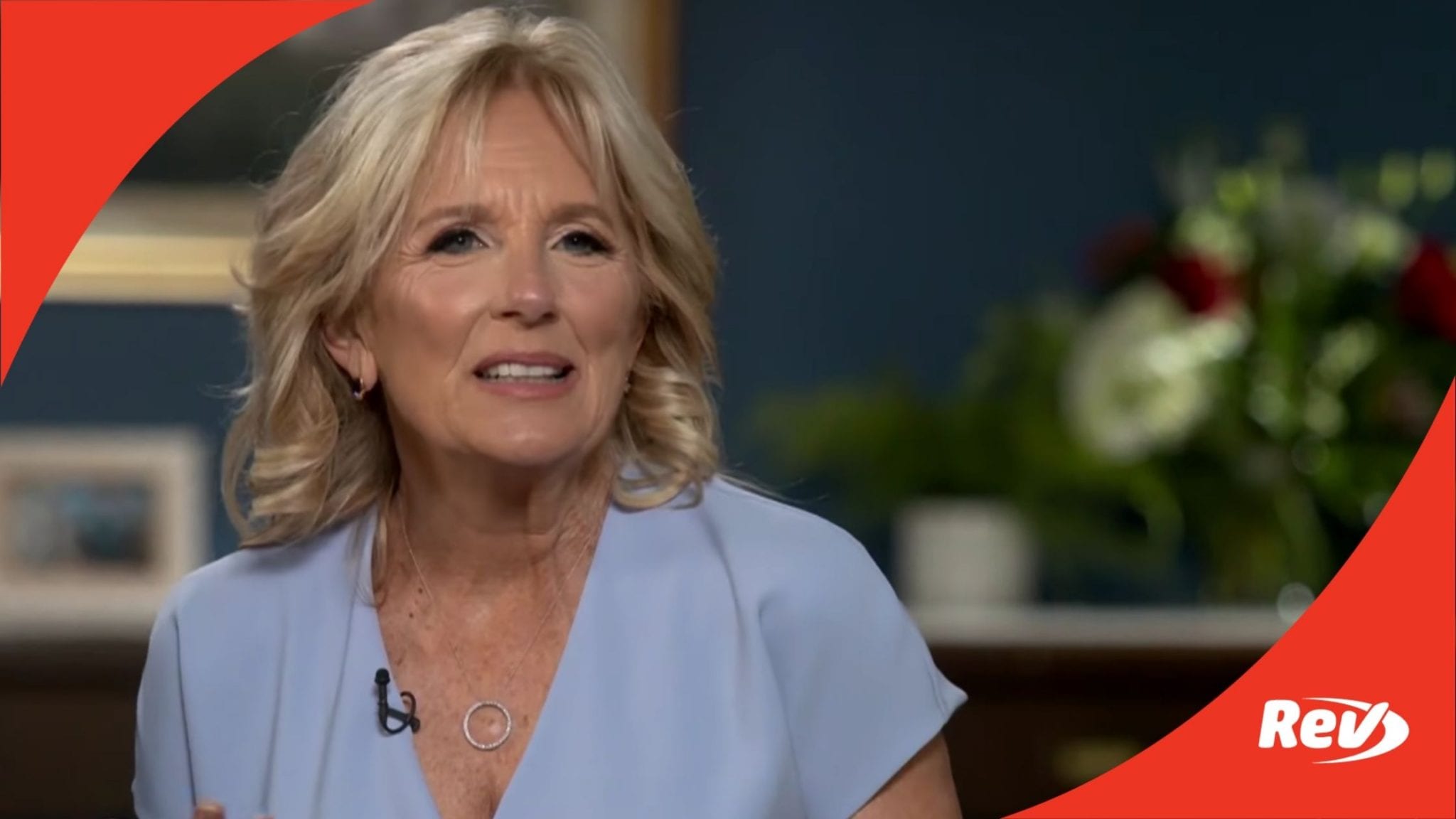 Joe and Jill Biden participated in an interview with Stephen Colbert on December 17, 2020. Dr. Jill Biden responded the WSJ essay written by Joseph Epstein where he referred to her as “kiddo” and said “‘Dr. Jill Biden’ sounds and feels fraudulent, not to say a touch comic.” Read the transcript of her response here.

Stephen Colbert: (00:11)
Welcome back, everybody. Joining us now is the future first lady of the United States, Dr. Jill Biden. Dr. Biden, thanks so much for being here.

Stephen Colbert: (00:20)
Happy holidays to you too. You are historic in that you will be the first first lady with a full-time paying job. What is that, and why is that important to you?

Dr. Jill Biden: (00:34)
Well, it’s hard for me to think of it in historic terms, I guess because I taught all eight years while I was second lady. But I’m really looking forward to being first lady and doing the things that I did as second lady, carrying on with military families and education, and free community college, cancer that Joe and I have both worked on. And then I’m going to teach as well.

Stephen Colbert: (01:02)
You once said in your own memoir, “The role I have always felt most at home in is Dr. Biden.” Now, some people have recently taken it upon themselves to question that title of yours. Do you have any reaction to those people?

Stephen Colbert: (01:18)
It caught me by surprise as well. I did not see that one coming.

Dr. Jill Biden: (01:21)
No, nor did I. And it was really the tone of it that I think that… He called me kiddo, and one of the things I’m most proud of is my doctorate. I mean, I worked so hard for it, and Joe came when I defended my thesis.

President-elect Joe Biden: (01:38)
I got to hand her her doctorate on the stage, University of Delaware. She had two master’s degrees. She kept going to school all the time while teaching at night, and then what happens is I said, “Jill, why don’t you get a doctorate and make us some real money?” She gets the doctorate and gets a $2,000 raise.

Dr. Jill Biden: (01:57)
But look at all the people who came out in support of me. I mean, I am so grateful, and I was just overwhelmed by how gracious people toward me.

Stephen Colbert: (02:09)
Do you think it might be a little bit of a compliment that people are trying to think of something to criticize you about, and they’re like, “Oh, what do we got? I got it!”

Stephen Colbert: (02:16)
Now, what about you as the husband who loves this person? Did you ever want to get out a length of pool chain and go full Corn Pop on these people?

President-elect Joe Biden: (02:35)
I’ve been suppressing my Irish-ness for a long time.

Stephen Colbert: (02:38)
It’s always a smart thing to do. Now, the inaugural obviously is… I don’t know how many days away. I bet one of your staff knows. How many days away is it? What?

Stephen Colbert: (02:52)
34. Send that girl a box of steaks. She got it right. So 34 days from now, Mr. President-elect. You first ran for this job 32 years ago. I got to think you’ve been imagining what that day was going to be like for a long time. What’s it going to be now in reality? How does that match your original image?

President-elect Joe Biden: (03:14)
Well, the truth is I hadn’t thought about in a long time, for real, because we didn’t plan on… After Beau died, I decided… I was a professor up at the University of Pennsylvania, had an institute at the University of Delaware. And it wasn’t until those folks came out of the fields down in Charlottesville that I realized something had to happen. And what happened was quickly, our granddaughters asked for a meeting. They came to see us, and grandson had said, “You got to run, Pop.” And that’s when we decided to run. But it’s been more a sense of… How can I say it? A sense of obligation than wanting to live in the White House. This is not who we’ve been. The country we’ve been the last four years is not who we are, and we have to get back to who we are. We are a democracy. We are a democracy that has shown respect and decency and been a beacon to the rest of the world, and we were losing that.

Stephen Colbert: (04:10)
Well, what about the event itself? What’s going to happen at the inaugural? Have those plans been solidified yet? I know that you’ll be holding the Bible.

Stephen Colbert: (04:20)
Have you been working out? Because this is the size of your family Bible.

Stephen Colbert: (04:27)
Why is your Bible bigger than mine? Do you have more Jesus than I do?

President-elect Joe Biden: (04:30)
No. No, I think so, but it’s just been a family heirloom on the Biden side of the family, and every important date is in there. For example, every time I’ve been sworn in for anything, the date has been on that, and it’s inscribed on the Bible. Our sons, when he was sworn in as attorney general, all the important dates in our family, going way back. And it’s just been a family heirloom.

Stephen Colbert: (04:56)
There’s been speculation by some about whether your predecessor will attend, as is traditional, your inaugural. Does it matter to you whether he does?

President-elect Joe Biden: (05:07)
In a personal sense, no, but in a sense relating to-

President-elect Joe Biden: (05:13)
… history, in terms of… We’ve been the beacon of democracy for the last 200 years, and the peaceful transfer of power, and the power being handed from one person to another, one party to another, is who we are. And that’s the part I worry about, is how that reflects around the world. But that’s the only standpoint from which… I don’t take it personally, but I do think it affects the view of the rest of the world as to who we are.

Stephen Colbert: (05:43)
So for the good of the country, it would be a better thing to have happen.

Stephen Colbert: (05:47)
It seems like as long as… The both of you have both been in Washington and weathered the slings and arrows of that town. You’re about to step into completely different right now. And as you’ve known, people who you thought that you could rely on sometimes turn on you. What are you going to do, and how will you sustain each other for the attacks that you know are coming your way? I mean, case in point, I know you want to be as bipartisan and reach across the aisle, but as much as you don’t want it to happen, you know that the people who want to make hay in Washington are going to try to use your adult son as a cudgel against you. How do you feel about that, and what do you have to say to those people?

President-elect Joe Biden: (06:33)
Well, look. We have great confidence in our son. I am not concerned about any accusations made against him. It’s used to get to me. I think it’s kind of foul play, but look, it is what it is, and he’s a grown man. He is the smartest man I know, I mean, from a pure intellectual capacity. And as long as he’s good, we’re good.

Stephen Colbert: (07:04)
As a father, I understand that and I admire that, but I mean in terms of your job as president. Can you reach across the aisle to people who will be using this as an attack on you, when it is such a personal attack because it’s about family?

President-elect Joe Biden: (07:23)
But if it benefits the country, yes, I really mean it, because we know who we are. We know-

President-elect Joe Biden: (07:42)
Because look, there’s so much at stake, and the American people, I think they can smell the phoniness, smell what’s true and what’s not true. But what it does do… It’s just been a disappointment. I feel badly for them. I’m not being facetious. I feel badly-

President-elect Joe Biden: (08:05)
I feel badly, but what’s happened? What went wrong? What’s going on here? Anyway, look at the people who’ve stepped up. Look at all the Republicans who stepped up in this campaign, former office holders. John McCain’s wife, people who went out there who were whole public office were major Republican figures. The former chairman of the Republican party. So there’s a lot more good than… But my job… I’m not kidding, Stephen. I’m going to be judged by history, whether or not I can make things better for the American people. And I will deal with anyone if what we’re working on is improving the wellbeing of the American people. That’s not phony, it’s real. I’ll swallow hard, and I’ll do it.

Stephen Colbert: (08:55)
We have to take another quick break, but stick around, everybody. We’ll be right back with President-elect Joe Biden and Dr. Jill Biden.