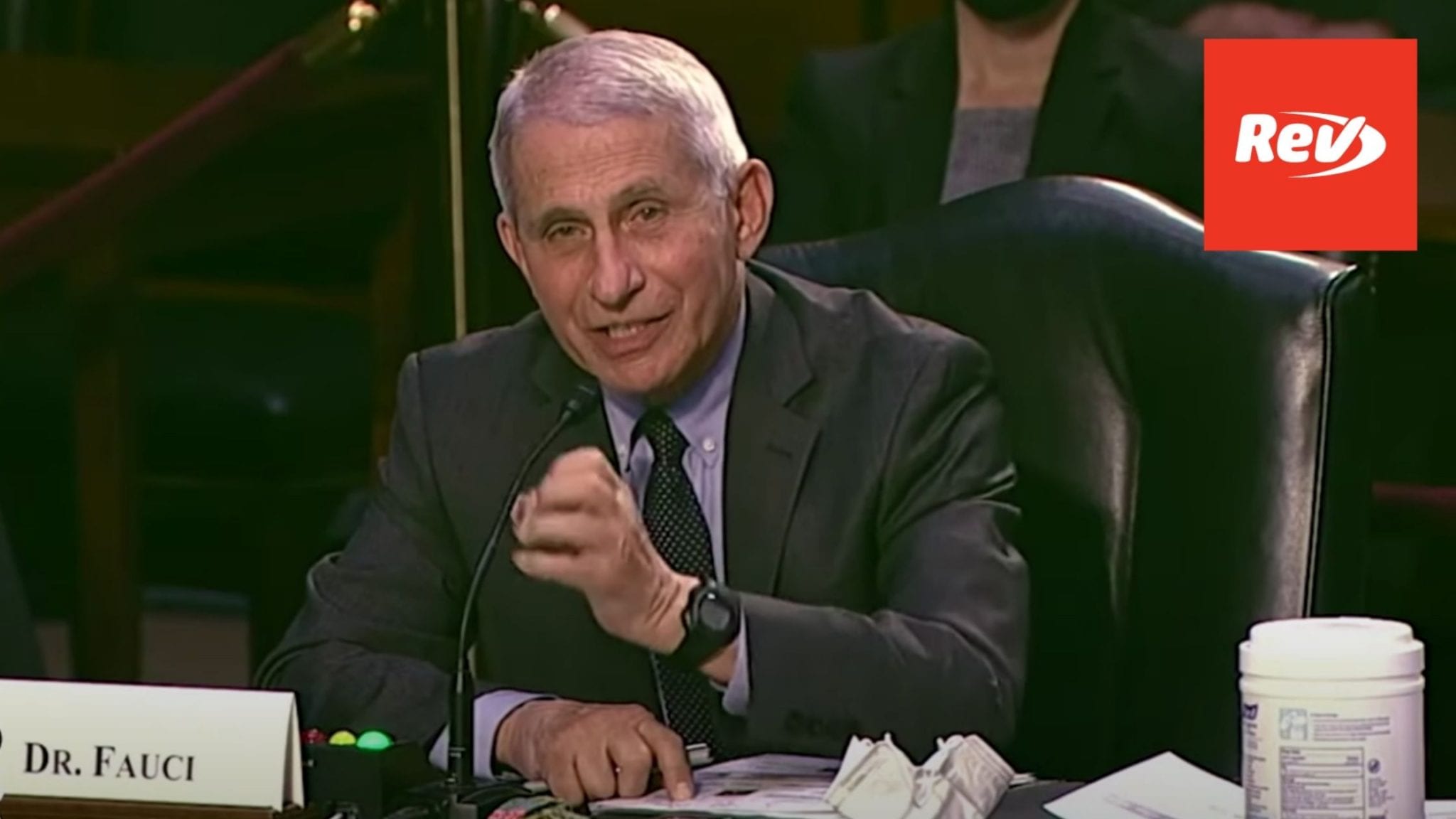 Sen. Rand Paul questioned Dr. Fauci during a congressional hearing on March 18, 2021 over whether masks are necessary for people who have been vaccinated or have had the virus. Dr. Fauci emphasized that masks are still necessary for everyone to wear, especially with new virus variants. Read the transcript of their remarks here.

Sen. Paul: (00:00)
Dr. Fauci, in a recent British study, David Wiley and others found that no symptomatic reinfections from COVID-19 after following 2,800 patients for several months. In fact, there’ve been no reports of significant numbers of reinfections after acquiring COVID-19 naturally.

Sen. Paul: (00:18)
Shane Crody, a virologist at [inaudible 00:00:21] Institute for Immunology concludes from his experiments that the amount of immune memory gained from natural infection would likely prevent the vast majority of people from getting hospitalized disease, severe disease for many years.

Sen. Paul: (00:34)
In this study, which was published in Science, Dr. Crody showed that antibody levels stayed relatively constant with only modest declines over six to eight months. Dr. Crody reported that notably memory B cells specific for the spike protein or RBD were detected in almost all COVID-19 cases with no apparent half-life at five to eight months after infection.

Sen. Paul: (00:56)
In other words, Dr. Crody found significant evidence of long-term immunity after COVID infection. Furthermore, Dr. Crody noted B-cell memory to some other infections has been observed for as long as 60 plus years after smallpox vaccination, or even 90 years after natural infection with influenza. That was a woman who got the Spanish flu, still showed immunity 90 years later. So rather than being pessimistic towards people gaining immunity after they’ve had COVID or had a vaccine, studies argue for significant optimism. In fact, there have been no scientific studies arguing or proving that infection with COVID does not create immunity.

Sen. Paul: (01:36)
There’ve been no studies showing significant numbers of reinfections of the 30 million Americans who have had COVID. Only a handful of re-infection have been discovered. In fact, the New York Times reported last fall, more than 38 million people at the time worldwide had been infected with the Coronavirus. And as of that date, fewer than five of these cases had been confirmed by scientists to be reinfections. Scientists interviewed for the article concluded in most cases, a second bout with the virus produced mild or symptoms or none at all.

Sen. Paul: (02:10)
Given that no scientific studies have shown significant numbers of reinfections of patients previously infected or previously vaccinated, what specific studies do you cite to argue that the public should be wearing masks well into 2022?

Dr. Fauci: (02:31)
I’m not sure I understand the connection of what you’re saying about masks and reinfection. We’re talking about people who have never been infected before.

Dr. Fauci: (03:03)
No, that’s not. Here we go again with the theater. Let’s get down to the facts. Okay? The studies that you quote from Crody and [inaudible 00:03:11] look at in vitro examination of memory immunity, which in their paper, they specifically say, this does not necessarily pertain to the actual protection. It’s in vitro.

Sen. Paul: (03:26)
And what studies can you point to that shows significant reinfection? There are no studies that shows-

Dr. Fauci: (03:31)
Let me finish the response to your question, if you please. The other thing is that when you talk about reinfection and you don’t keep in the concept of variance, that’s an entirely different ball game. That’s a good reason for a mask. In the South African study conducted by J&J. They found that people who were infected with wild type and were exposed to the variant in South Africa, the 351, it was as if they had never been infected before. They had no protection. So when you talk about reinfection, you’ve got to make sure you’re talking about wild type. I agree with you that you very likely would have protection from wild type for at least six months if you’re infected. But we in our country now have variants that are circulating.

Sen. Paul: (04:24)
What study shows significant reinfection, hospitalization, and death, after either natural infection or the vaccine? It doesn’t exist. There is no evidence that there are significant reinfection after vaccine. In fact, I don’t think we have a hospitalization in the United States after the two week period after the second vaccination. Do you have a death in the United States?

Dr. Fauci: (04:47)
You’re not hearing what I’m saying about variance. We’re talking about wild type versus variance. And now they’re-

Sen. Paul: (04:55)
What proof is there that there are significant reinfection with hospitalizations and death from the variants? None in our country, zero.

Dr. Fauci: (05:03)
Well, because we don’t have a prevalent of a variant yet. We’re having one… Can I finish? We’re having 117 hat’s becoming more dominant

Sen. Paul: (05:25)
You can’t get it again. There’s virtually 0% chance you’re going to get it. And yet you’re telling people that have had the vaccine who have immunity, you’re defying everything we know about immunity by telling people to wear masks who have been vaccinated. Instead, you should be saying, there is no science to say we’re going to have a problem from the large number of people being vaccinated. You want to get rid of vaccine hesitancy, tell them they can quit wearing their mask after they get the vaccine. You want people to get the vaccine? Give them a reward, instead of telling them that the nanny state’s going to be there for three more years and you got to wear a mask forever. People don’t want to hear there’s no science behind it.

Dr. Fauci: (05:59)
Well, let me just state for the record that masks are not theater. Masks are protective and we ask-

Sen. Murray: (06:16)
Dr. Fauci, if you could respond so that we could understand the difference between the virus itself and the variance and the reason for a mask.

Sen. Murray: (06:27)
If you could respond to the question, so that we could all understand the difference between the vaccine in controlling the wild type versus the variants that are out there and the reason for wearing a mask. I’d appreciate it.

Dr. Fauci: (06:39)
Yeah. Yes. First of all, when you have a variant, you have an immunity that you get what’s convalescent, Sarah, and the same sort of thing if I vaccinate you and me against the wild type, you get a certain level of antibody that’s specific for a particular viral strain.

Dr. Fauci: (06:57)
If there’s a circulating variant, you don’t necessarily have it. You have some spillover immunity to be sure, but you diminish by anywhere from two to eight fold the protection. So the point I’m saying is that there variants now circulating.

Dr. Fauci: (07:14)
The point that Senator Paul was making was that if you look at wild type only, there is some clear cut credence to what he’s saying, but we are living right now in a situation where we’re having a dominance of 117, which was the original UK. We have a very troublesome variant in New York City of 526. We’ve got two variants in California of 427, 429, and we have a number of others. So we’re not dealing with a static situation of the same virus. That was the only point I’m making.