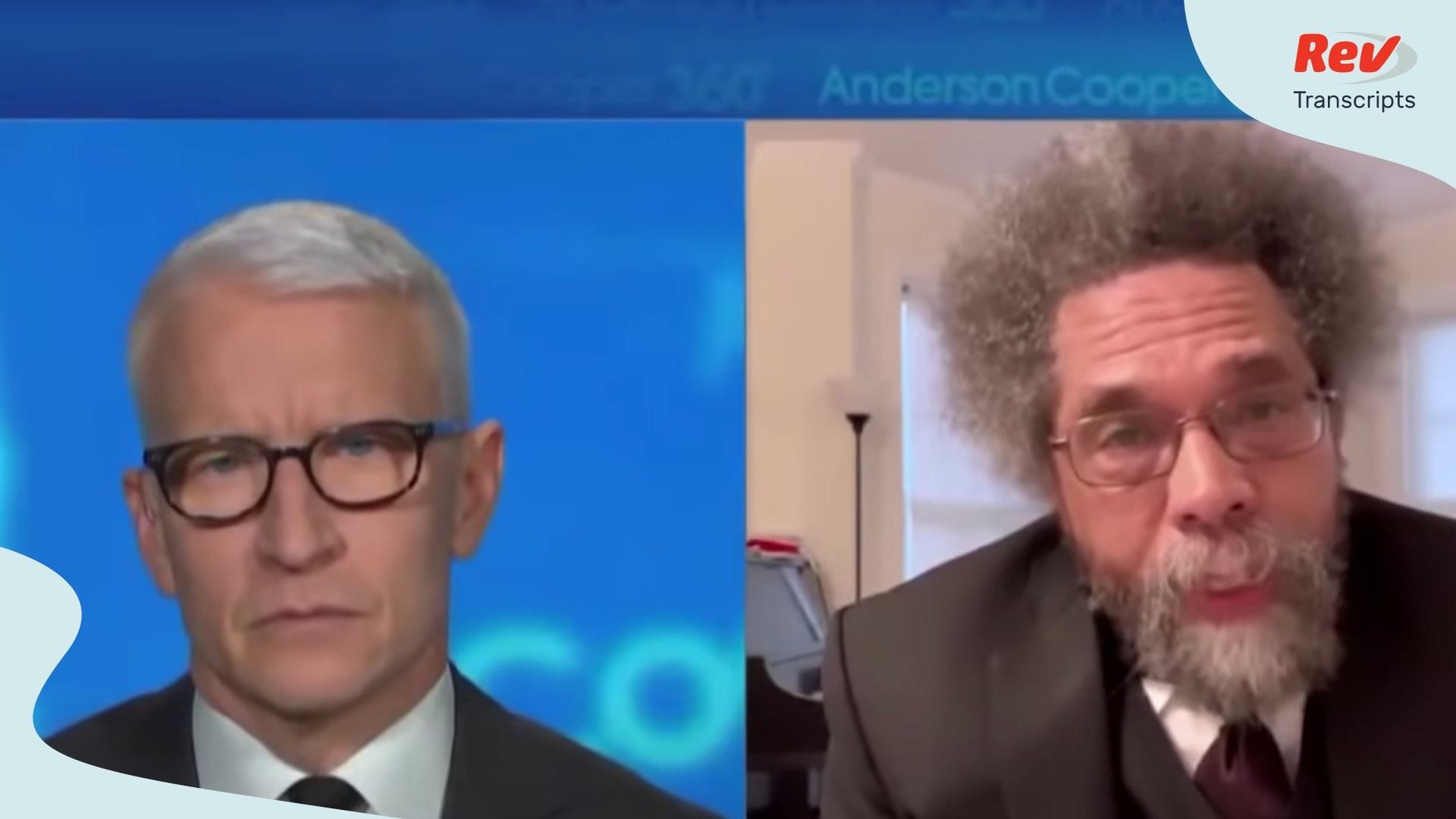 Dr. Cornel West had a moving speech about the Floyd family in an interview with Anderson Cooper, which moved Cooper to tears. Read the full transcript here.

Anderson Cooper: (00:00)
Funeral today, hearing the chants of, “We will breathe,” outside of the church. I’m wondering what was going through your mind and your heart?

Cornel West: (00:09)
It was a heavy day, my brother. And yet I was buoyed up because I saw in the hearts and minds and souls, not just of the Floyd family, but of the church, of the music, the preaching, a love. Not one reference to hatred or revenge. It was all about love and justice. It’s in the great tradition of the best of black people, of people who have been hated chronically systemically for 400 years but have taught the world so much about love and how to love. You saw John Coltrane’s Love Supreme in that church service. You saw the love of the children or Marvin Gaye’s What’s Going On and Toni Morrison’s Beloved. You saw Mama in Raisin in the Sun, Lorraine Hansberry.

Cornel West: (01:20)
What is it about these black people, so thoroughly subjugated, but want freedom for everybody? That’s a grand gift to the world, right in the bowels at the center of a American empire that is enslaved, Jim Crow, Jane Crow, [Lynch Stem 00:00:01:37] still dishing out these loved warriors. That’s what I saw in the Floyd family. And I was buoyed up. It reminded me of the West family, it reminded me of Irene and Cliff, and Cliff and [inaudible 00:01:48] and Cheryl. That’s where we come from, Shiloh Baptist Church. You can put us down, but you’re not going to put us down in such a way that we’re going to hate you because you become the point of reference. No, we’re going to put a smile on Larcenia’s face. That’s his mama. That’s where he is right now. He’s lying right next to Sister Larcenia, whose way of engaging the world was embracing it with all of the love.

Cornel West: (02:15)
Now I’m not saying we don’t have black thugs and gangsters. I’m talking about the best of our tradition, because brother, brother, brother, if we had created a black version of the Ku Klux Klan, there’d been a Civil War every generation with terrorist cells in every hood. And that’s what brother Trump needs to understand, because looks like he’s trying to push us to a race war. But the good news is, if there was a race war, we got a whole lot of white brothers and sisters on our side now. That makes a big difference. And we got black folk and red folk and indigenous people, then Asians and so forth.

Cornel West: (02:50)
This is a matter of integrity and honesty, a matter of justice and love. They kept it on the high ground. That was a thing. But I did break though, brother. When I saw those brothers marching in like the ushers in Shiloh Baptist Church, and pick up that coffin and go and walk out, my daughter was there, couldn’t take it, man. Been at this for over 50 years. And yet, I got to bounce back. And I will bounce back because we got a love that the world can’t take away. The world white supremacy may make being black a crime, but we refuse to get in the gutter. We’re going to go down swinging like Ella Fitzgerald, Muhammad Ali, in the name of love and justice. And we’re doing it for Brother Wyatt. We’re doing it for my daughter. We’re doing it for the Asians. We’re doing it for the whole world because that’s the only hope of the world, and that kind of love is always tragic, comic, and cruciform. You got to get ready to get crucified with that kind of love, and you need to keep dishing it on generation after generation after generation.

Cornel West: (03:59)
The Floyd family lifted up that spiritual, moral banner in the midst of a moment in which we got all these lies and crimes, be it the cop, The Pentagon or Wall Street or White House or even Congress itself. We know they don’t represent the best of this country. It’s just that the best of this country right now seems to be so powerless, but in the streets of our nation, we see this multi-racial, multi-cultural, multi-gender, different sexual orientation, different religions, Jewish brothers and sisters holding up Rabbi Abraham [inaudible 00:00:04:39], the Catholics holding up Dorothy Day, the Protestants holding up William Coffin and Lydia Maria Child, and the agnostics and the others holding up the Norman Thomases and the Edward [Zoede 00:04:52] and others. That was my mixed wrestling with what I saw that day, my brother. And I think we’ve got hope in the form of motion, but we got to get ready for the backlash. We got to get ready for the neo-fascist clamp down because it’s coming. It is coming.

Anderson Cooper: (05:12)
Yeah. I got to say, I never had the honor of taking one of your classes, but I feel like I’m a student of yours and I learn lessons every time you speak. I just think it’s…

Cornel West: (05:35)
Now we in it together, brother. And the beautiful thing about tears, Socrates never cries, but Jeremiah does, and so does Jesus. We cry because we care, we’re concerned. It’s not about political correctness, it’s not about self-righteousness. We cry because we are not numb on the inside. We don’t have a chilliness of soul and a coldness of mind and heart. We cry because we connect, but then we must have a vision that includes all of us. And we must have an analysis of power that’s honest in terms of the greed, especially at the top, in terms of the hatred, running amok, in terms of the corruption, not just White House Congress, it’s in too many churches, too many mosques, too many synagogues, too many universities, too many civic associations, and then the greed in us. You and I talk about this all the time, right? The gangster in us, because we’re wrestling with this day by day. And that’s why we need each other, my brother.

Anderson Cooper: (06:33)
You said something, I follow you, when you’re not on my program, I follow you wherever you go and I read what you had to say. And you said something a couple days ago on somebody else’s program. You said, “Can we hold onto integrity, honesty, and decency?” And it seems to me, as you said, there’s a lot of people who have remained silent, who’ve just been watching this, and as you said, there’s going to be a backlash and that’s something to be prepared for because I think there’s a lot of people just waiting on the sidelines waiting to start to chip away at this and cause doubt and divide people. But I think that’s so important, that at its core, this is about integrity and honesty and decency and fortitude and courage, which are two other things you’ve spoken a lot about.

Cornel West: (07:19)
Absolutely. And especially the fortitude and courage. We must have the integrity, honesty, and decency. Not purity. No one of us are pure or pristine. We all have our spots and our wrinkles as it were. But it’s the courage and the fortitude, that’s what’s necessary, the backbone. We don’t need lukewarm folk, we don’t need summer soldiers. We need all season love warriors. That’s the tradition that we saw represented in that church at the spiritual level.

Cornel West: (07:50)
My dear Brother Sharpton, I love Brother Sharpton. We come out of the same black church tradition and so forth. And we fight all the time, and we come together and so forth, and he was powerful. But I always want to connect the police, power in police crimes, with the Wall Street power and the Wall Street crimes. We live in a culture where the people feel as if they can do and say anything and get away with it with no accountability, no answerability, no responsibility. We saw it on Wall Street in terms of all of that insider trading, market manipulation, and fraudulent activity and predatory lending. How many went to jail? Zero. Trump, say anything, do anything, think they can get away with it. Pentagon can drop drones and precious folk in Yemen, Pakistan, and others, and think they can get away with it. We have to have accountability. Our politicians can seemly tell us anything in front of our faces, and we know what’s going on behind closed doors, with their tie to big money. Just be honest, that’s what integrity is.

Cornel West: (09:29)
The English word human comes from the Latin humando, which means burial. And that’s what we saw today. We saw the humanity, because they were scribing significance that this precious person made in the image of God whose body was now undergoing the extinction and his soul ascending.