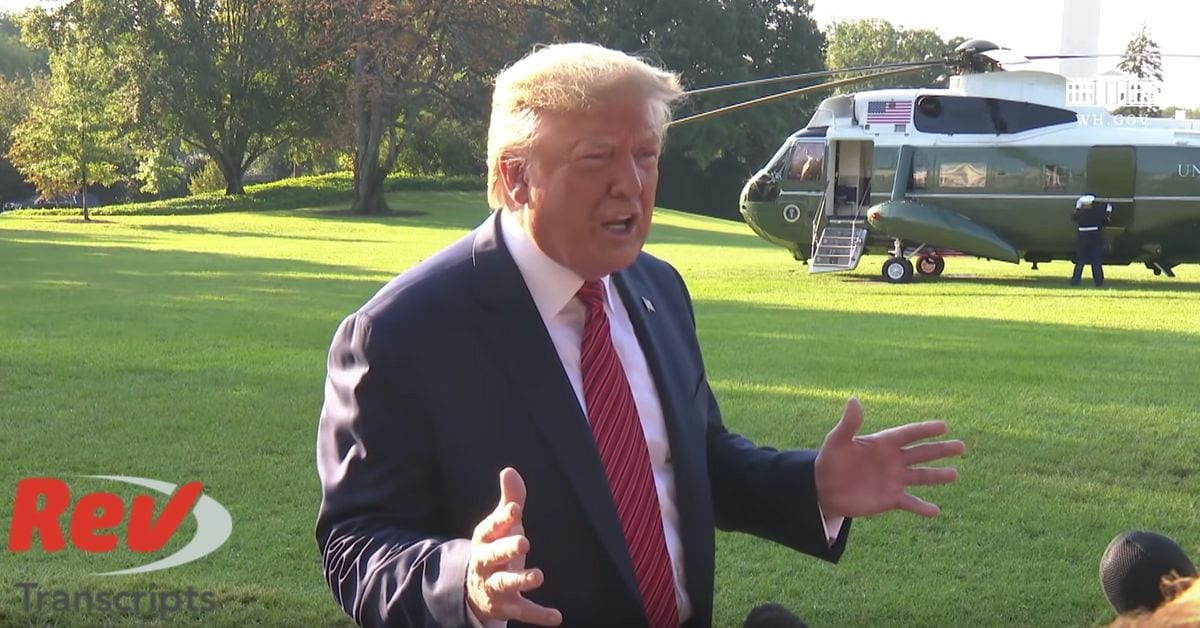 Donald Trump confirmed outside the White House this weekend that he spoke with the Ukrainian president about Joe Biden. Several people in Washington are urging the White House to release the full transcript of Trump’s phone call with the Ukrainian president. This evolved from a US whistleblower who released to the WSJ that Trump asked & pressured the Ukraine to investigate Joe Biden’s son. Read the full transcript of Donald Trump’s remarks below.

Donald Trump: (00:37)
He asked if I’d go with him, and I’ve accepted. And we’re going to have a good time with Prime Minister Modi. We have a… I hear it’s a tremendous crowd. So that’ll be in Houston. And then after that, I’m going to Ohio. Pratt Industries is opening a $1 billion plant. And I told Mr. Pratt, who is a great… Anthony. I told him if he does something really spectacular, I’ll go and cut the ribbon. And he did. He invested $1 billion in Ohio.

Donald Trump: (01:12)
So that’s Pratt Industries. They’re great people. It’s a great company, headed by a very great businessman from Australia. So they’re bringing $1 billion into Ohio. And I said I’d go and cut the ribbon, and here it is. We’re ready to cut a ribbon. It’s a great plan. So we look forward to that. Then we’re coming home, and then we have a lot of work at the United Nations during the next week.

Donald Trump: (01:44)
Nothing’s ever off the table completely, but I have no intention of meeting with Iran. That doesn’t mean it doesn’t happen. I’m a very flexible person, but we have no intention. It’s not set up. We’re meeting with a lot of leaders. We have about 15 meetings set up, but Iran is not one of them.

Donald Trump: (03:26)
Oh, I would have no problem with it. Rudy’s a very straight shooter, and Rudy wants to see the same thing as a lot of other people with respect to Ukraine. Ukraine has had a tremendous corruption problem. Somehow they were involved in a lot of different things that took place in our country, and hopefully it can be straightened out. And I will say, the new president… We had a very good talk. The new president got elected based on the fact that he would end corruption. That was probably his number one thing.

Donald Trump: (04:00)
Well, this whistleblower, or whoever it was, because it sounds like it’s not a whistleblower, you can’t have that happen to a president of the United States. The conversation by the way, was absolutely perfect. It was a beautiful, warm, nice conversation, and it was put out last night also by Ukraine. But you can’t have people doing this, and you can’t have people doing false alarms like this. And you know, when the president speaks to the head of another country, he has to be able to speak to those people, and those people don’t want to know that they’re being recorded or that you have a stenographer working.

Donald Trump: (04:55)
Well, I don’t say anything, but whenever I speak to a foreign leader, I assume there are many people on the line. I don’t assume I’m talking to the leader. Anytime I’m on the phone with a foreign leader, many many people are on the line. Sometimes they’re taping calls, sometimes they’re doing a stenographer, but I also assume many people are on the line from the other side. So if I’m speaking to a country, they also have people on the line. So who would say a thing like what you’re saying? Now I will say this. I said absolutely nothing wrong. It was perfect. Listen to me. Listen. Listen to me.

Donald Trump: (05:34)
Listen to me. I assume many people are on the line. I know that before I make the call, and that’s what you have… Intelligence agencies, everybody listening. That call was a great call. It was a perfect call. A perfect call. What wasn’t perfect is the horrible thing that Joe Biden said. And now we made a lie when he said he never spoke to his son. I mean, give me a break. He’s already said he spoke to his son, and now he said yesterday very firmly, “Who wouldn’t speak to your son? Of course you spoke to your son.”

Donald Trump: (06:27)
[inaudible 00:06:27] I’m going on the floods today. The floods are very important to me, and climate change. Everything is very important. But today, I’m going to Texas on the flood. Then I’m going to Houston on the big rally. It’s a rally for Prime Minister Modi, and he asked me to do it, of India. And I look forward to doing that.

Donald Trump: (07:07)
Well, not only Ukraine. Take a look at China. They took a tremendous amount of money out of China. Now, if they ever took over a China negotiation, he would sell us out. Look at all the money he made in China. The son, he knew nothing. The son is a stiff. He knew nothing, and he’s making hundreds of thousands and millions of dollars, and he did the same thing in Ukraine. He knows nothing. This is a very dishonest thing that Joe Biden did, and then he said he never spoke to his son. Does anybody believe that one?

Donald Trump: (07:37)
But then he also said long before that he did speak to his son. So he lied again. But what he said is that he wouldn’t give, I think it was billions of dollars to Ukraine, unless they fired the prosecutor who was looking at his son and his son’s company, the company that his son works with. And that’s a very dishonest thing. And I’m not looking to hurt Biden. I’m not even looking to hold him to it, to be honest, but he said a very bad thing. He said a very foolish thing. Now me, on the other hand, my conversation with the president, the new president of Ukraine, was perfect.

Donald Trump: (08:37)
Because I want Germany, and I want France, and I want the European Union to put up money, and I didn’t delay anything. We paid the military aid to the best of my knowledge.

Donald Trump: (08:48)
Listen to me. I gave so much more to Ukraine than Obama did. Go back and check your records.

Press: (08:56)
Mr. President, can you tell us why anybody should be allowed to buy a gun without a background check?

Donald Trump: (09:04)
We’re looking at it right now. We’re studying it very hard. It’s an issue that frankly, Congress is wasting all their time on nonsense. We’re studying it very hard. If Congress would ever get back to work, we could work something, but Congress is doing all of this nonsense, this garbage that they’re doing, and I’ll tell you what. They don’t have any time. The Democrats in Congress are doing nothing. I’ll tell you what. They’re going to lose the election. You know why? Because they’re not doing anything very hard with it.

Press: (09:31)
Why should anybody be allowed to buy a gun without a background check?

Donald Trump: (09:37)
Well, we’re working very hard with some Democrats. The problem I have is that Jerry Nablar, and all these people, they keep wasting time in Congress over nothing. They’re studying nothing. The Mueller Report was perfect. Corey Lewandowski was magnificent. Everybody is perfect. They’re wasting time. They couldn’t accept the Mueller Report. They couldn’t accept that defeat. They can’t now accept the fact that we have the best economy we’ve ever had, and we may be hitting another all time highs in the stock market.

Donald Trump: (10:10)
We’re looking at a lot of different things. The problem we find is the Democrats have very little time to talk, because they’re wasting their time. You take a look at what they’re doing. It’s a total waste of time, and they know it. They know it.

Donald Trump: (10:24)
Well, we’re working with Joe Manchin, the Senator, and we’re working with Pat Toomey, and we have a lot of people working on this, and we’ll be seeing it I say over a period of time. The problem that I have is the Democrats in the House especially, they’re totally unavailable to talk because they’re at hearings all day over something that’s already been won by us. They made up a story. It was a false story. It was a hoax.

Donald Trump: (10:58)
And frankly, we have to get to the bottom of how it started, but they are wasting all of their time on a hoax.

Donald Trump: (11:16)
Well, he’s got a job, and I could do things if I wanted, but I don’t want to do that. We’re so strong despite Jay Powell, but Jay Powell is not helping us. Other countries have lower interest rates. We’re the primest of them all. But he has the rate… Look, it’s very simple. He lifted the rates far too quickly, and he lowered them far too slowly, and it’s a shame. And it’s a shame.

Press: (11:38)
Are there other boneheads in your administration who’s jobs are safe?

Donald Trump: (11:41)
Not too many. Not too many boneheads. We have a great… I’ll tell you what. We really now have a greatest administration, but what we have is a great cabinet. Our cabinet has done a great job.

Donald Trump: (12:03)
No. He is a great gentleman, Joe. He’s doing a fantastic job, and I know one thing. He’s only going to do what’s right, but he is doing a fantastic job, and he was only going to do what’s right. But just so you understand, the conversation I had with the president of Ukraine, was absolutely perfect, and people better find out who these people are that are trying to subvert our country, because here we go again. These are bad people.

Donald Trump: (12:32)
But the conversation I had with the president of Ukraine was absolutely a 10. It was perfect. Now, what you have to do is look at the corruption on the Democrats’ side. Take a look at how the whole witch hunt started. Now they want to try and start another witch hunt, but unfortunately this one is reverting now to Joe Biden, because he’s done some very bad things. And I’m not even looking to hurt him, to be honest. He needs all the help he can get. I’m not looking to hurt him. I’m not looking to hurt his family. But the corruption and what he said is a terrible thing.