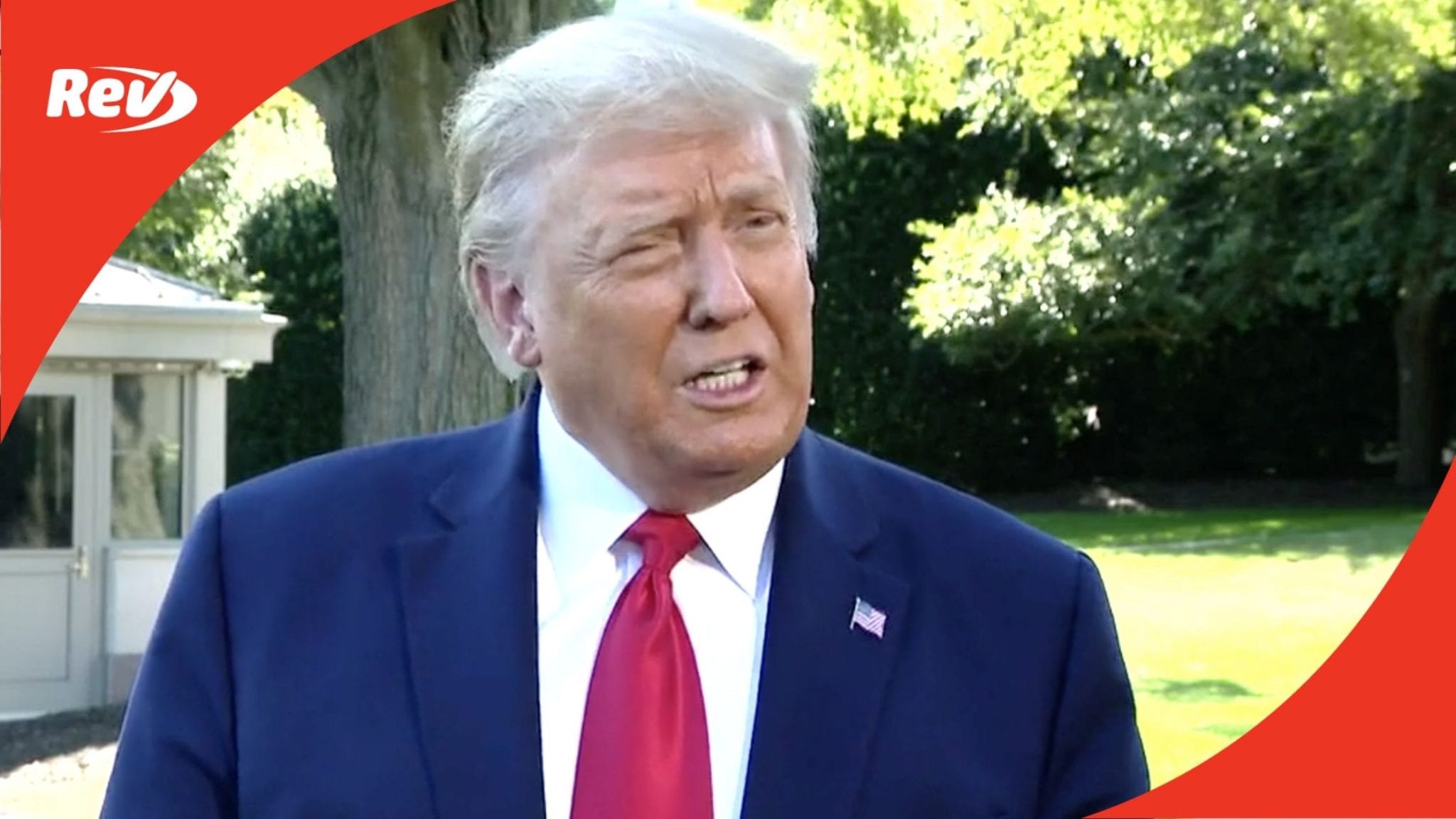 President Donald Trump gave remarks about the SCOTUS vacancy on September 21 on his way to Ohio. He said he’d like to see the Senate vote on a SCOTUS nomination before the election, and that he is looking at five women as a replacement for Justice Ruth Bader Ginsburg. Transcript of his remarks here.

President Donald Trump: (00:39)
I would say on Friday or Saturday, I’ll be announcing the pick. Five women are being looked at and vetted very carefully. Five, and we’ll make a decision probably Saturday, but Friday, or Saturday.

President Donald Trump: (01:06)
During this period of time.

President Donald Trump: (01:18)
I have. Today and yesterday, day before.

Speaker 4: (01:23)
Is it better to have a vote on your nominees before the election, or after?

Speaker 5: (02:06)
Are you worried about some Republican Senators, who may be a little reluctant?

President Donald Trump: (02:12)
We’ll have to see. I would think that that would be very bad for them. I think their voters, the people that voted them, put them there because of a certain ideology, or a certain feel. And they don’t want to have somebody do that. I think it’s very bad if they do that.

Speaker 2: (02:27)
What would be your concern if it happened after the election, sir?

Speaker 6: (02:30)
What makes you think that the last words, supposedly the last wishes of Dr. Ginsburg were made up? Because it supposedly came from her granddaughter

President Donald Trump: (02:37)
Yeah, it just sounds to me like it would be somebody else. I don’t believe… It could be. It could be, and it might not be too. It was just too convenient.

Speaker 2: (02:47)
What would be your concern if the vote happened after election day?

President Donald Trump: (02:50)
No concern, I just think it would be better. They asked would I rather have it. I’d rather have it before the election. I think it would be better for our country and we’ll pick somebody that’s outstanding, very qualified. They’re all qualified, but somebody that is outstanding and I’d rather see it all take place before the election. So before November 3rd.

Speaker 2: (03:12)
Are you concerned if you lost the election, it would be harder to get the person confirmed?

President Donald Trump: (03:15)
No, I don’t think so. No, I think we’re going to win. If you look at the polls, the real polls, we’re doing very well. We’re going to Ohio tonight. We’re packed. We’re packed everywhere. There’s never been, we’ve never had spirit like we have now. Even four years ago, the spirit now is greater even than it was four years ago. [crosstalk 00:03:35]

Speaker 7: (03:49)
Are you leaning towards one candidate or another?

Speaker 8: (04:06)
Who do you think poisoned Alexei Navalny in Russia?

President Donald Trump: (04:11)
We’ll talk about that at another time.

President Donald Trump: (04:17)
One of the people that’s very respected, but they’re all respected. She’s certainly one of the candidates. Yes.

President Donald Trump: (04:27)
I may, she’s highly thought of. And I’m getting a lot of phone calls from a lot of people. She has a lot of support. I don’t know it, but I hear she’s outstanding.

President Donald Trump: (04:43)
And she’s one of the people we’re looking at.

Speaker 2: (04:44)
Did you push the DOJ to name Seattle, and New York, and Portland anarchistic cities?

President Donald Trump: (05:13)
That’s working its way through. I give it a preliminary okay. They will work at two great companies, Oracle and Walmart. Now Larry Ellison’s a great genius at that kind of thing. The technology is incredible. And so if we can save it, we’ll save it. And if we can’t, we’ll cut it off. But they have preliminary. We’ll see what they could do. We have to have total security. That’s the only thing. Very important. We have to have total security. I’ll see you in Ohio. Thank you.