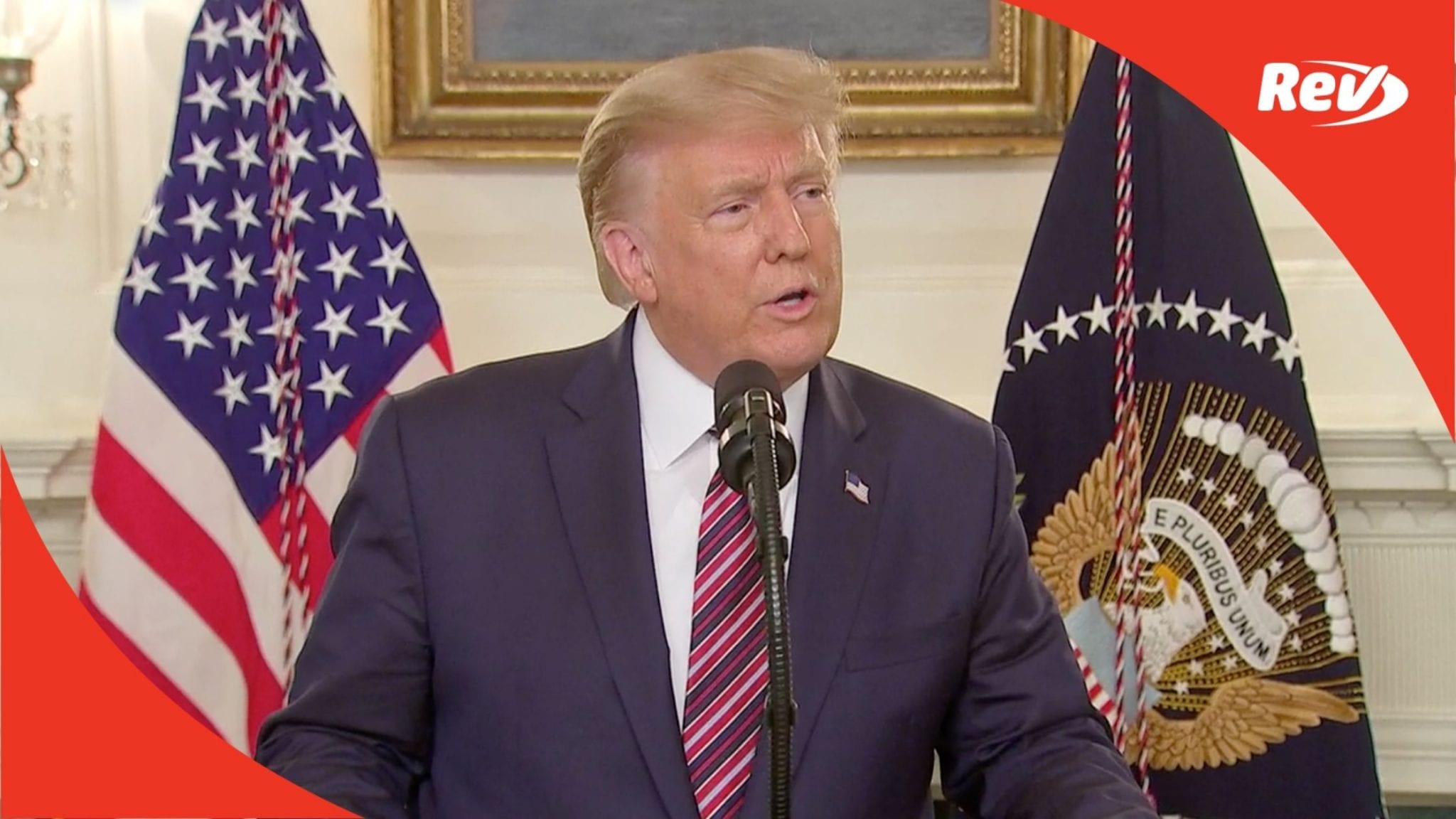 President Donald Trump revealed a new list of potential Supreme Court nominees during a speech on September 9. He also addressed comments he made to Bob Woodward about the coronavirus in February. Read the transcript of his remarks here.

President Donald Trump: (00:01)
Apart from matters of war and peace, the nomination of a Supreme Court Justice is the most important decision an American President can make. For this reason candidates for President owe the American people a specific list of individuals they consider for the United States Supreme Court. Four years ago, I announced my first list of highly qualified candidates and promise to fill Justice Scalia’s vacant seat from them from among those names. And just days after my inauguration, I kept that promise when I nominated Judge Neil Gorsuch. And as you know, he has been very spectacular. A year later, I nominated and the Senate confirmed another outstanding justice, Brett Kavanaugh. By the end of my first term, we will have confirmed a record number of federal judges, over 300, all of whom will faithfully uphold our Constitution as written. What has always made America exceptional is our reverence for the impartial rule of law.

President Donald Trump: (01:16)
People have come from all over the world to pursue the American dream based on this sacred principle. Equality under the law is the bedrock of our society. It is the principle that inspired American heroes to abolish slavery and end segregation, secure civil rights and build the most free and just nation in history. Unfortunately, there is a growing radical left movement that rejects the principle of equal treatment under the law. If this extreme movement is granted a majority on the Supreme Court, it will fundamentally transform America without a single vote of Congress. Radical Justices will erase the Second Amendment, silence political speech, and require taxpayers to fund extreme late term abortion. They will give unelected bureaucrats the power to destroy millions of American jobs. They will remove the words “Under God” from the Pledge of Allegiance, they will unilaterally declare the death penalty unconstitutional, even for the most depraved mass murderers. They will erase national borders, cripple police departments, and grant new protections to anarchists, rioters, violent criminals, and terrorists.

President Donald Trump: (02:39)
In the recent past, many of our most treasured freedoms, including religious liberty, free speech, and the right to keep and bear arms have been saved by a single vote on the United States Supreme Court. Our cherished rights are at risk, including the right to life and our great Second Amendment. Over the next four years, America’s President will choose hundreds of federal judges and in all likelihood, one, two, three, and even four Supreme Court Justices. The outcome of these decisions will determine whether we hold fast to our nation’s founding principles or whether they are lost forever. That is why today I am announcing 20 additions to my original list of candidates for the United States Supreme Court. Should there be another vacancy on the Supreme Court during my presidency, my nominee will come from the names I have shared with the American public, including the original list and these 20 additions.

President Donald Trump: (03:44)
Joe Biden has refused to release his list, perhaps because he knows the names are so extremely far left that they could never withstand public scrutiny or receive acceptance. He must release a list of justices for people to properly make a decision as to how they will vote. It is very important that he do so. My original list of potential justices include many of our nation’s brightest legal minds, such as Bill Pryor, Amy Coney Barrett, and Thomas Hardiman, outstanding people. Like those distinguished individuals, the 20 additions I am announcing today would be jurors in the mold of Justice Antonin Scalia, Clarence Thomas and Samuel Aledo.

President Donald Trump: (06:54)
Every one of these individuals will ensure equal justice, equal treatment and equal rights for citizens of every race, color, religion, and creed. Together we will defend our righteous heritage and preserve our magnificent American way of life. Thank you, God bless America. Thank you very much. Does anybody have any questions on the judges, please? Anybody? On the judges, excuse me. Any questions? They’re outstanding people. Very important decision, very important that Joe Biden put up potential nominees. I think it’s a very important thing for our country that he do that. Okay, please go ahead. Do you have a question?

President Donald Trump: (07:57)
Well, I think if you said in order to reduce panic, perhaps that’s so. The fact is I’m a cheerleader for this country. I love our country and I don’t want people to be frightened. I don’t want to create panic, as you say, and certainly I’m not going to drive this country or the world into a frenzy. We want to show confidence. We want to show strength. We want to show strength as a nation and that’s what I’ve done. And we’ve done very well. We’ve done well from any standard. You look at our numbers compared to other countries, other parts of the world, it’s been an amazing job that we’ve done. I think it’s very sad in many respects because the incredible individuals working so hard on it, including our Vice President, they’ve done this great job. They haven’t been acknowledged by the news media and they should for the job we’ve done, whether it’s ventilators.

President Donald Trump: (08:48)
And now you’ll see very soon with vaccines and with therapeutics, the job we’ve done has been incredible, but we don’t want to instill panic. We don’t want to jump up and down and start shouting that we have a problem that is a tremendous problem, scare everybody. And I’ll tell you the other thing, we immediately started buying all over the world. We started buying masks and gowns and everything else, and we don’t want to cause pricing to go up to a level that becomes almost unaffordable. So yeah. And so in that sense, I agree with it. Yeah. Please

Speaker 3: (09:25)
How do you reassure the American public going forward that they can trust what you’re saying?

President Donald Trump: (09:29)
Well, I think that’s a really a big part of trust. We have to have leadership. We have to show leadership. And the last thing you want to do is create a panic in the country. This was a horrible thing. It was sent to us by China. Should not have happened, should never have happened. This is a disgusting, terrible situation that was foisted upon us. And we have to show, we just don’t want to use, the best word is panic. We don’t want to have to show panic. We’re not going to show panic. And that’s exactly what I did. And I was very open, whether it’s to Woodward or anybody else, it’s just another political hit job. But whether it was Woodward or anybody else, you cannot show a sense of panic or you’re going to have bigger problems than you ever had before. Please.

Speaker 5: (10:23)
Mr. President, don’t you think if you were more forthright with the American people, more lives could have been saved? Do you take responsibility at all for some of the 200,000 deaths that we’ve had?

President Donald Trump: (10:33)
So I think if we didn’t do what we did, we would have had millions of people die. We closed up our country. We close it up very, very quickly, very effectively. We did a job. We learned about this horrible disease along with the rest of the world, which had to learn about it. And then we opened it up and now we know the vulnerable, we know who it attacks, who it’s so vicious against. And I think we’ve done from every standpoint a incredible job. We shouldn’t have lost anybody. Nobody should have lost. China released something that they shouldn’t have been allowed to, they should not have released. It came out of China, it went to Europe, it went all over the world should have never happened. They could’ve stopped it. They stopped it from going into the remainder of China. It started in Wuhan and they stopped it, but they didn’t stop it from coming to our country.

President Donald Trump: (11:22)
Now we had to show calm. We had to show, if it was up to you or whoever, I have no idea what he said in the book. And again, it’s a book that I gave him some quotes and frankly, we’ll see how the book turned out. I have no idea. You’re asking me questions for the first time. But again, the last thing we can show is panic or excitement or fear or anything else. We had to take care of the situation we were given. Long before anybody else wanted to do it, I closed our borders to a very heavily infected China. If I didn’t do that, we would have had hundreds of thousands more people die.

President Donald Trump: (12:07)
Dr. Fauci said it, many people said it. It was a great decision. It was a decision I made and I had to make, it was a decision that a lot of people thought I was wrong. Nancy Pelosi said I was wrong. Joe Biden said I was wrong. They all came back and they said it was the right decision. And I was way early. That was in January. The end of January I did that. So that was a very good thing we did. Otherwise we would have had hundreds of thousands more. But if we didn’t close the country, we would have been talking about millions of people instead of the numbers that we have right now.

President Donald Trump: (12:58)
You didn’t really think it was going to be to the point where it was. All of a sudden the world was infected. The entire world was infected. Everyone was scrambling around looking where to buy face masks and all of the other things. We’ve opened up factories. We’ve had tremendous success with face masks and with shields and with the ventilators, we’re now supplying the rest of the world. We have all the ventilators we can use. And remember this, the ventilators were very important, not one person that needed a ventilator didn’t get it. And these are very complex, expensive machines to make.

President Donald Trump: (13:30)
We opened up something like hadn’t been done since the second World War. Honestly, we’ve done an incredible job, but we don’t want to run around screaming, shouting, “Oh, look at this. Look at this.” We have to show leadership. And leadership is all about confidence and confidence is confidence in our country and our people have been great, we’ve been put through a lot by China by releasing this, by having this come here, we will put through a lot. They could have done something about it and they chose not to. I am very honored to have presented to you today a list of 20 incredible people. And we will talk later. I’m sure we’ll be meeting later in the day. Thank you very much.