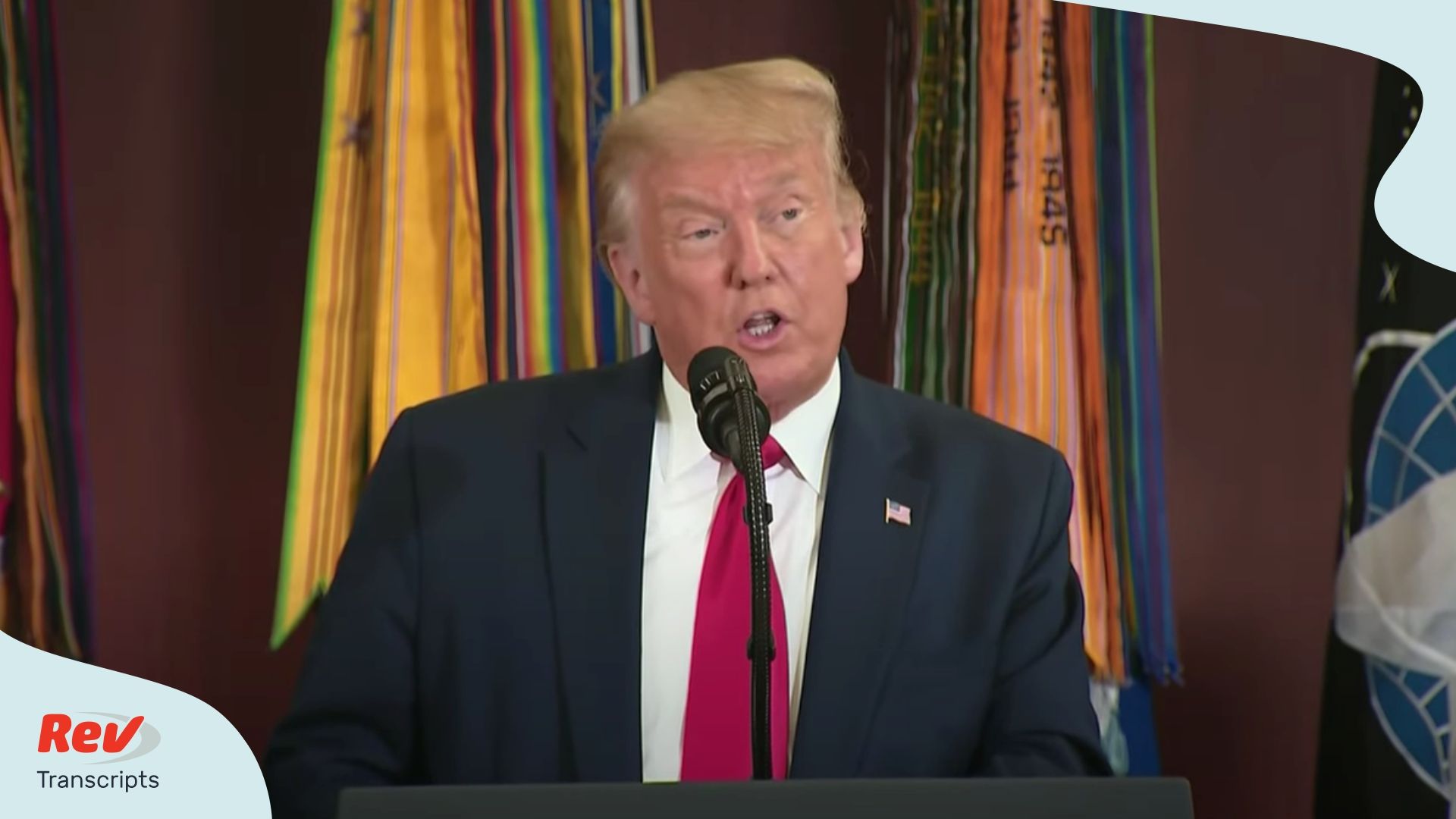 Donald Trump gave a speech on July 10 on enhanced counternarcotics operations after a public briefing on the subject. Read the full transcript of his remarks here.

Donald Trump: (00:00)
Thank you very much. And thank you to our great Admiral Faller. Thank you also to all of the exceptional leaders and talents that we have in this room. US Southern Command is just an outstanding group of people. Thank you very much, very much, Admiral. We’re here today to discuss our vital effort to keep deadly drugs out of our country and away from our children. And wow, are we making progress in a short period of time, thanks to you. It’s amazing. I’ve come to personally thank you. I wanted to make this trip personally. We were going to do a phoner and I said, “A phoner’s not quite the same thing, is it?” So I came to personally thank you for your valiant fight to defend our borders and take our vile traffickers, these vile traffickers, out of business, knock them out of business. The smugglers, the criminal cartels, we want to knock them out.

Donald Trump: (01:00)
You’re on the front lines every day saving countless American lives and delivering the righteous thunder of American justice. No adversary can match the awesome power of the United States Army, Navy, Air Force, Coast Guard, Marines. And I must tell you, very soon, we’re going to have a thing called Space Force. You know about that, right? Space Force, that’s a big deal. One of the many things we’ve done in this administration that’s going to be one of the most important, I predict.

Donald Trump: (01:28)
Let us also show our deep appreciation for your law enforcement partners at the Department of Homeland Security and Department of Justice. Thank you very much for being here. Thank you very much. We’ll always stand with the incredible men and women of law enforcement. We will never, ever defund our police. Okay? That I can tell you, we’re not defending police. What’s going on here, Admiral, when you hear defund the police, you’re probably saying, “That’s a foreign language, right?” So just a terrible thing, but it’s I assume this is going to be a fad. We’ll call it a fad. But it’s not something that will work very well, that I can tell you. We’re pleased to be joined by Secretary of Defense, Mark Esper. Thank you very much, Mark. Thank you. Acting Secretary of Homeland Security, Chad Wolf. I think we’re keeping him pretty busy, right? He’s been a busy man. Coast Guard Commandant Admiral Karl Schultz. Admiral, thank you very much. And a great warrior, he’s a warrior, he’s a strong guy, a great guy, Congressman Mario Diaz-Balart. Thank you very much.

Donald Trump: (02:43)
On the first of this year, I announced that the United States Armed Forces would begin a surge of military assets in the western hemisphere unlike anything seen in recent history. And that is a fact. One of the reasons is we now have better equipment than we’ve ever had. We have new beautiful equipment that comes along with $2.5 trillion in spending, all made in the USA. Over the last three months, American service members joined by partner nations have patrolled regional waters from the Caribbean Sea to the East Pacific. The United States deployed a vast arsenal of Coast Guard Cutters, Naval combat ships, specially armed Coast Guard helicopters, and they are real weapons, they are powerful weapons. High-tech maritime patrol aircraft, as well as roughly 1,300 additional personnel. These forces represent a 65% increase in ships and a 75% increase in surveillance aircraft from last year alone.

Donald Trump: (03:44)
We’re taking the fight directly to the sinister criminal cartels and we’re showing them no mercy. We are doing numbers like nobody thought possible. Even the Admiral, he would say that he would have never thought this was going to happen to the extent that it’s happened. Our message is clear, you will not threaten our citizens, you will not poison our children, and you will not infiltrate our borders. We will find you, we will stop you, and we will put everybody that we find behind bars if you’re lucky. The results of this historic international campaign have been absolutely phenomenal. This joint operation has resulted in the interdiction of more than 120 metric tons. Does anyone know how much that is? Of illicit narcotics. That is a massive, billions and billions. And they arrested more than 1000 drug traffickers. These actions have denied the cartel of billions of various cartels of billions and billions of dollars in cash and prevented the loss of untold American lives that we’ve seen the results in the United States.

Speaker 2: (05:22)
So we keep some for prosecution, then it’s destroyed by our partner.

Donald Trump: (05:29)
They burn it, all right. That sounds like a good way of doing it. On behalf of millions of American moms and dads, I want to express our country’s pride and gratitude for your lifesaving actions. My administration is committed to ensuring you have the tools, the resources, equipment, and support you need and the support that you deserve, and you’ve always deserved it. And you used to run short. You don’t run short anymore. You have the best equipment in the world. After years of painful budget cuts, I ended last year’s disastrous defense sequester and secured almost the 2.5 billion that I mentioned to rebuild our entire United States military. We’re giving you the finest airplanes and ships, submarines, tanks, missiles, and weapons of every single kind, even new uniforms in some cases, for the Army, as an example. And again, all made in the USA. I love that sound, made in the USA.

Donald Trump: (06:21)
We’ve approved the two new state of the art National Security Cutters, and two Polar Security Cutters for the United States Coast Guard, and so much other equipment, including, we have under construction right now, the largest icebreaker in the world. And we’re going to be trying to get, if we can, an extra 10 icebreakers, we only have one. Russia has 40, we have one. So we will have two, but we think we’ll have 10 because we’re trying to do a deal with a certain place that has a lot of icebreakers. And we’re seeing if we can make a really good deal where you can have them very fast, you know about that, we’re working on it. And I think we can surprise you at a very good price, which will be nice, much cheaper than the one we’re building. And that’s also nice. You can do about five of them.

Donald Trump: (07:09)
Our enemies are unnoticed because the United States military is much more powerful, much more lethal, and much more prepared than ever before. We’re in a position that we’ve never been in equipment-wise and we have the greatest people on earth. We’re also supporting the courageous men and women of CBP, ICE, Border Patrol, and DEA, and FBI, and all of the heroes of law enforcement, great people. As long as I am President, I will never allow your sacred mission to be undermined or attacked in any way. I will not have open borders, we will not abolish the police, and we will not slash the budgets for our military, and we will not allow our country to be swamped with deadly drugs.

Donald Trump: (07:53)
We have stopped numbers that we’ve never stopped before or even close. And we have done it in a way that our enemy understands. And they’re getting a little bit concerned because they’ve never had losses like this, they’ve never had submarines taken from them. They actually build submarines because, smaller versions of what we have, to put it mildly, much smaller, but they’re submarines, nevertheless, very expensive things. And they’ve never seen anything like what’s happened to them in the last year and a half. We will defend our country, we will defend our borders, our children, our heroes, and our great American flag, we’ll always defend our American flag, we’re very proud of our flag. We will protect, preserve, and promote the American way of life and we will always stand strong for God, country, family, and freedom.

Donald Trump: (08:44)
I just want to thank everybody for being here. This is a very special moment. I think especially so because you’ve done so much over the last short period of time to bring life and safety to the United States of America and other parts of the world, by the way, but to the United States. And I want to thank you. God bless you all. Thank you very much. Admiral, thank you very much. Thank you.