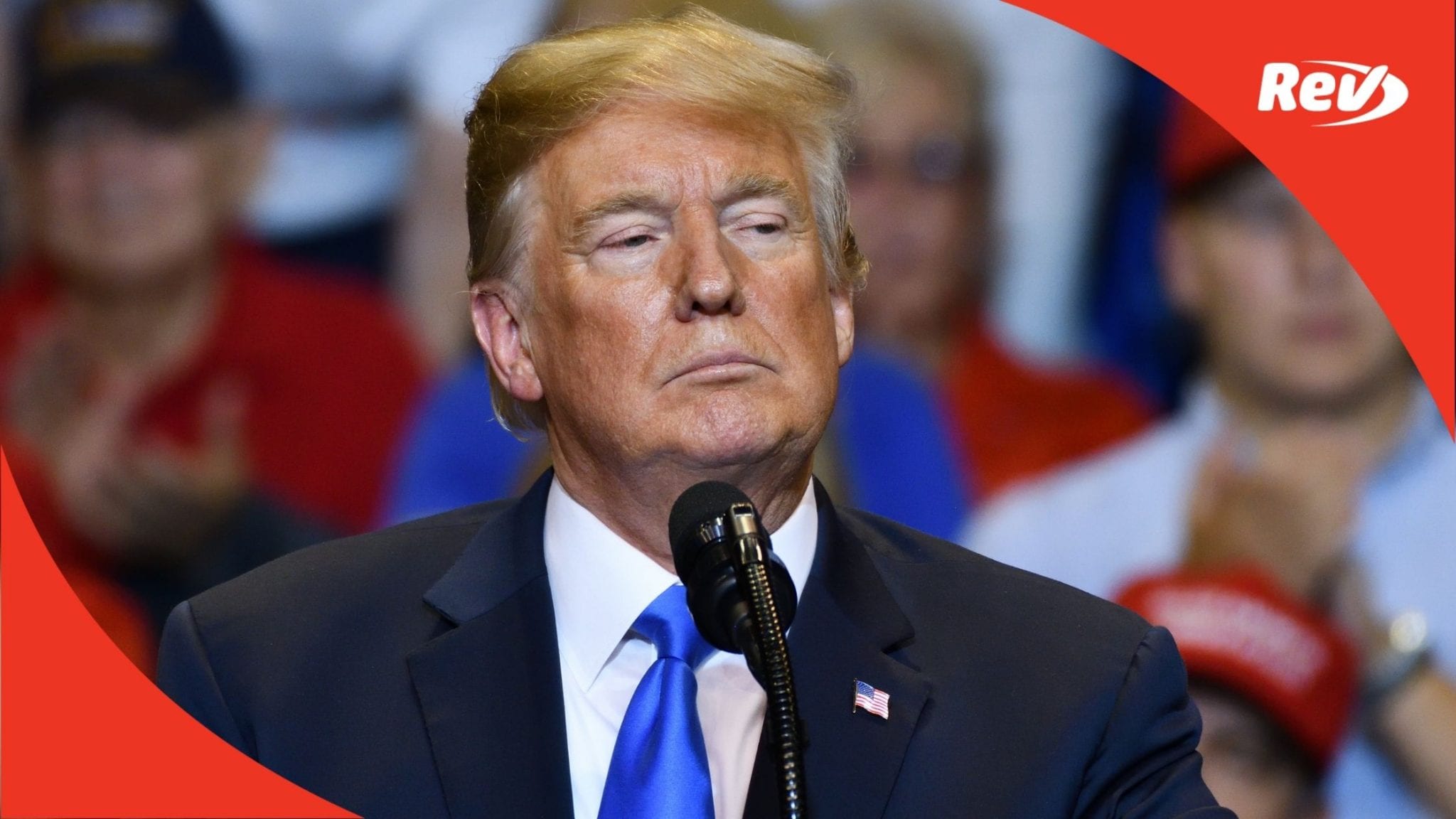 Donald Trump phoned into the Pennsylvania Republican hearing on the 2020 election to discuss claims of election fraud. Read the transcript of his speech remarks here.

President Donald Trump: (00:19)
Thank you very much. I’ve been watching the hearing on OAN and saw it on a couple of other great networks, but I really appreciate being asked to speak. I’m in the Oval Office right now, and it’s very interesting to see what’s going on. This was an election that we won easily. We won it by a lot. Big energy.

President Donald Trump: (00:40)
An official was on this morning on a important show and said, “There’s no way Trump didn’t win Pennsylvania, because the energy industry was all for him. I saw with my eyes what happened,” and he told me horror stories, absolute horror stories. So this was, very sad to say it, this election was rigged and we can’t let that happen. We can’t let it happen for our country. And this election has to be turned around, because we won Pennsylvania by a lot. And we won all of these swing States by a lot.

President Donald Trump: (01:17)
Anybody watching television the night of the election was saying, “Wow.” I was called by the biggest political people. Congratulations, sir, on a big win. And all of a sudden ballots were dumped all over the place, and a lot of horrible things happened and everybody in that room, I want to thank all of the people that signed affidavits and all of the speakers. You fantastic people. You’re great Patriots.

President Donald Trump: (01:41)
I want to thank the senators for being there. And it’s so important, day before Thanksgiving, it really represents somebody. Between the voter suppression and all of the horrible things that happened to poll watchers. We have poll watcher affidavits piled up to the ceiling. They’re all over. They were treated horribly all over, all of these swing States, I mean virtually all of the swing States, and many other things were happening that were horrible, just horrible.

President Donald Trump: (02:11)
But the poll watchers weren’t allowed to watch. They were in many cases, whisked out of the room. Not only into pens that were 20, 30, 40, 60, 100 feet away where you couldn’t even see. They were using binoculars. People are reporting that they had to use binoculars, and that didn’t work. If you were a Republican poll watcher, you were treated like a dog and the Democrats had no problem, but they were rough.

President Donald Trump: (02:37)
They were literally pushed out, and it was rough tactics. This is what happened here. This is not the United States of America what happened, and I think everybody knows that. That’s why you’re there, and that’s why you’re so vehement about it. We have many, many cases, many, many cases of people walking in, an elderly woman walks in looking forward to voting November 3rd and says, “Oh good. Where would I go about voting?”

President Donald Trump: (03:24)
Nope, your ballot is in.” And then they give her a provisional ballot to sign, which goes nowhere. It’s a disgrace that this is happening to our country. We won this election by a lot. We got 74 million votes. And if you would have said 74 million votes the day before the election, every single professional in the business would have said, there’s no way of beating that. We got 11 million votes more than we had four years before in 2016, and we got many votes more than Ronald Reagan had when he won 49 States, that nobody would’ve said we even had a chance of losing. And all you had to do is take a look at the numbers at 10 o’clock in the evening when everybody thought the election was virtually over, and then very weird things happened.

President Donald Trump: (04:40)
The whole world is watching us. The whole world is watching the United States of America and we can’t let them get away with it. And we have judges that are afraid to make a decision. We have judges that don’t want to do the same thing. A very good lawyer said, “Well, sir, I mean, that’s a big statement for a judge to overthrow an election.” I said, “Really? If he got hundreds of thousands of votes more than he was entitled to get through all of the things that I’m listening to right now, and you’re just covering a few of them, we have hundreds and hundreds of affidavits of stories that are even worse than the stories I’m hearing. Why wouldn’t they overturn an election?”

President Donald Trump: (05:24)
Certainly overturn it in your state, because we have other States that are just as bad. If you look at Michigan with Detroit, you look at the things that happened in Detroit where you have a voter, but you have more votes than you have voters. You take a look at Detroit, Michigan, you have more votes than you have voters. Then you have two people that don’t want to certify. They don’t want to certify, and they’re harassed violently. And they turned off the cameras during the harassment for two hours. Then they said, “Wow.” And they were afraid and they voted. Then they went back to sign and they couldn’t do it because they said, “We can’t do it because this is corrupt. This is horrible what’s taken place.”

President Donald Trump: (06:09)
Think of it, more votes than you have voters, but that was the least of it. They have things that were as bad as that. And this is going on all over, all over. We’re doing very well in a lot of States, a lot of good things are happening in Georgia. We’re getting little help from government, but a lot of good things happening in Georgia, Wisconsin, and Michigan. They’re seeing what happened in Detroit. And we sure are looking at what’s happening in Pennsylvania and Philadelphia.

President Donald Trump: (06:39)
What happened in Philadelphia, they keep the poll watches not only in pens, but they keep them out of the building. And the only reason they got back into the building was they got a court order. Then the definition of back into the building was very far away where they couldn’t see anything. And they talk about closed circuit television, except you couldn’t see it because the picture was so unclear you didn’t even know what they were doing. They could have been playing a baseball game. So it’s a very sad thing for our country to have this.

President Donald Trump: (07:07)
They have to turn over the results. It would be easy for me to say, “Oh, let’s worry about four years from now.” No, this election was lost by the Democrats. They cheated. It was a fraudulent election. They flooded the market. The defrauded everybody with ballots.

President Donald Trump: (07:28)
I just want to thank everybody for being there. You’re doing a tremendous service. This is a very important moment in the history of our country, and you’re doing a tremendous service to our country, and don’t worry about bravery because the people that talk the most, they’re not the ones you have to worry about. And these are all talkers, they intimidate, but these are not people that you’re going to ultimately have to … They push you around. They pushed our poll workers out. Our poll watchers were pushed out of the building. Some got back in, they were put into pens, but these are not people …

President Donald Trump: (08:03)
Don’t be intimidated by these people, but they’re bad people. They’re horrible people, and they’re people that don’t love our country. So we don’t have to worry about four years right now, we have to worry about what happened on November 3rd and previous to November 3rd. And by the way, after November 3rd, when people put votes in and they put them in illegally, they put them in after the polls closed. And one of our great Supreme Court Justices made mention of that. And I can’t imagine that any Justice or anybody looking at it could be thrilled when they vote after the election is over.

President Donald Trump: (08:40)
So I want to thank everybody very much for being there. I want to thank the state Senate, respected people, tremendous people. And you’re doing a tremendous service for our country. If something was done wrong, if this election was won fraudulently, and that’s what happened, it was a fraud. And we’re talking about, very importantly, many more ballots, many more votes than the number we need.

President Donald Trump: (09:05)
In other words, if we needed 50,000 votes, we’re not talking about we found nine dead people that voted. Of course, there were many more than that, numbers that nobody even believes. No, we’re talking about numbers that are far in excess of the 50,000. Far in excess in another state where we lost by 10,000, and they went absolutely wild because we got far more votes than they thought possible. And they’ve just stepped on the gas. And they got caught, just like they got caught spying on my campaign. They got caught exactly. They got caught doing this.

President Donald Trump: (09:41)
So I really appreciate it. And the country appreciates it, and we have to turn the election over because there’s no doubt. We have all the evidence. We have all the affidavits. We have everything. All we need is to have some judge listen to it properly without having a political opinion or having another kind of a problem, because we have everything. And by the way, the evidence is pouring in now as we speak.