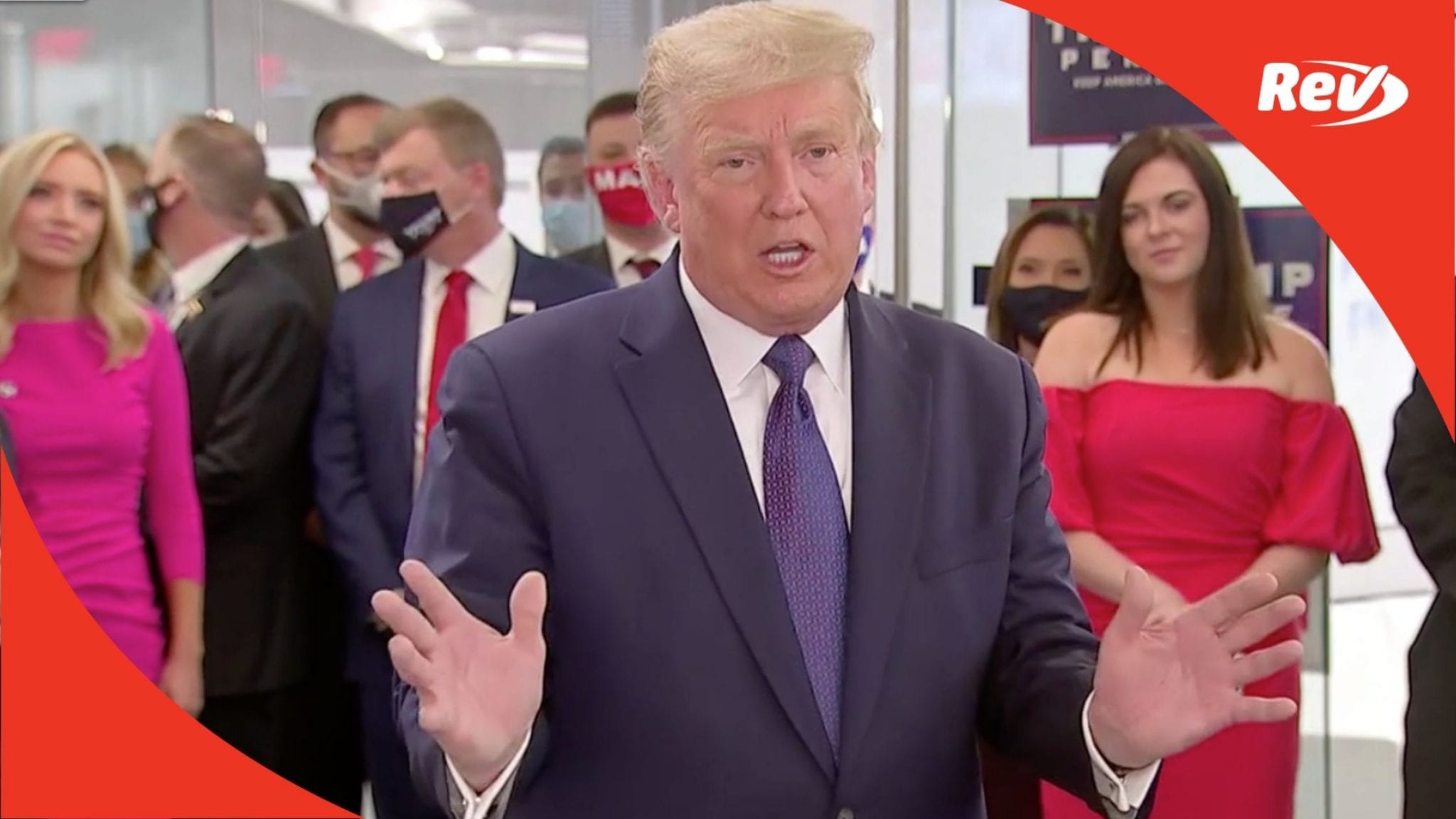 Donald Trump: (00:00)
We’re set for a tremendous success and success is going to bring unity. And it was bringing it before and then we got hit with the China virus and that certainly, you had to go back and I think we’ve done an incredible job with respect to that. Other than public relations, because, and I’m not sure that it’s possible to convince you of it because, you know, you people were not really convincible no matter what we did. But we’ve done an incredible job, not only in handling it, don’t forget we were expecting, and people were projecting 2.2 million people. We closed up the greatest economy in the history of the world, for any country, not just for our country, and we are now opening it up. We saved more than 2 million lives and did an incredible job with therapies and therapeutics and with, I think, maybe cures because frankly, some of this stuff is so good.

Donald Trump: (00:54)
But, if you look at the ventilator situation, we had a ventilator problem and now with all the work that everybody’s done, including Jared, people coming in from Silicon Valley, and now we’re sending the ventilators all over. I mean, all over the world now, all over the world, we’re producing them for other countries. But it’s been an incredible period of time. And I think that if you look at, and I say it and I say it proudly, we are rounding the corner, but the vaccines are coming out very soon. They’re having tremendous success, Johnson and Johnson, Moderna, Pfizer, and we’re going to have something, we’re going to have a very special year. Next year, I think is going to be more successful than it was last year. We had the best year we’ve ever had last year and I think we’re going to be right in that category for next year. So that’s very successful.

Speaker 2: (01:46)
Mr. President, have you written an acceptance speech and a concession speech?

Donald Trump: (01:50)
No, I’m not thinking about concession speech or acceptance speech yet. Hopefully we’ll be only doing one of those two and, you know, winning is easy. Losing is never easy, not for me it’s not. But I think we have, when you see rallies, the likes of which in the history of this country, probably in the history of the world, nobody’s ever seen before. There’s a tremendous love going on in this country and there’s really a tremendous unity. There’s a tremendous unity. Nobody’s ever seen that, where you take an airport and the airport is not big enough to hold the crowds. Nobody’s ever seen a thing like that. And our opposition, as you know, would have a few people sitting in circles and that’s okay. That’s not abnormal. That’s not abnormal, actually. I mean, that’s the way it is. But we would get crowds of 50,000 people, 45,000 people, more. Nobody’s ever seen anything like that. So, it was an honor. They’re great people. These are people that, they appreciate what we did and they also remember before I got there and before we all got there. This group has been with me, a lot of them are very young, but they’ve been with me, many of them for a long time, right? A long time. And I just want, I really came here to thank you all. And then I’m going to say and get immediately back to work. But I want to thank you.

Speaker 3: (03:36)
If you had one more day on the campaign trail, where would you go and what would you do?

Donald Trump: (03:39)
Well, we spent a lot of time in Pennsylvania. It’s always been a very good place for me. I went to college there, it’s always been good. I think Pennsylvania is very important. Florida is very important, obviously. A lot of people talked about Texas and Texas is, we will have a tremendous victory there based on, you know, everything that you see. This is no longer polls, this is now we’re looking at what’s happening.

Donald Trump: (04:06)
It will be a tremendous victory in Texas. I’m hearing we’re doing tremendously well in Arizona. I think we’re doing well all over. Yeah?

Speaker 4: (04:13)
When do think we’ll know? Should every vote be counted no matter how long it takes?

Donald Trump: (04:17)
Well, I think you’ll know possibly tonight, depending on the extent of a victory. I think you could know tonight. I think the ruling on Pennsylvania was an unfortunate one by the Supreme Court, because I think we should know what happens on the night. Let people put their ballots in earlier, but you have to have numbers. You can’t have these things delayed for many days and maybe weeks, you can’t do that. The whole world is waiting. This country is waiting, but the whole world is waiting. And a lot of shenanigans, a lot of bad things happen with ballots. When you say, “Oh, let’s devote days and days.” And all of a sudden the ballot count changes. And you take a look at Philadelphia, the history of Philadelphia politics. No, I don’t put people on their honor code. I don’t think it’s right and I think it’s a very dangerous thing that they’ve done with that decision and maybe their wisdom will change that decision or maybe we’ll go back and give them a right to change it. But that’s a terrible, it’s a very dangerous decision for this country, what they did with Pennsylvania and some others also.

Donald Trump: (05:22)
You have to have a date and the date happens to be November 3rd, and we should be entitled to know who won on November 3rd. And if somebody comes along and puts a ballot in way late, they shouldn’t be, they should put the ballot in earlier. There’s no reason why they can’t put the ballot in two weeks earlier or one week earlier. I think it’s a very dangerous decision for our country in many ways dangerous, in many ways. Yeah?

Speaker 5: (05:47)
Will you speak to the American people tonight, regardless of the outcome or not-

Speaker 6: (06:49)
What are you seeing in Florida, especially from the seniors? Are you worried about any slippage there or do you think-

Donald Trump: (07:35)
But I’ve done more than any other president in the history of this country for African-American, the Black community and they understand the criminal justice reform, prison reform, historically Black colleges and universities. You look at what we’ve done. Opportunity zones with Tim Scott of South Carolina who’s great. Nobody’s done what I’ve done in terms of the African-American community. So, and they see it and they’re tired of being used by the Democrats for a hundred years. I mean, it’s been a hundred years. So I think we’re doing very well there and I’ve heard we’re doing very well with the Hispanic community.

Donald Trump: (08:23)
Well you’ll see that in the filings. We had plenty of money, I will tell you. We had plenty of money. And what I didn’t do is call up Wall Street and say, “Send me $25 million to the head of every firm. I could have done that. I would have been the all time King of fundraising if I did that. But once you do that, you can no longer deal properly with them. You just can’t. So I didn’t do that. We could have done that. I could have raised much more money. I mean, Hillary Clinton spent much more money than I did. And in this case, when they raise that much money, that means to me they’re making deals and that can’t happen.

Donald Trump: (08:56)
So thank you very much. We’ll, maybe see you later. Have an exciting day. And for you, I just appreciate everything you’ve all done and we’ll see you soon, okay?