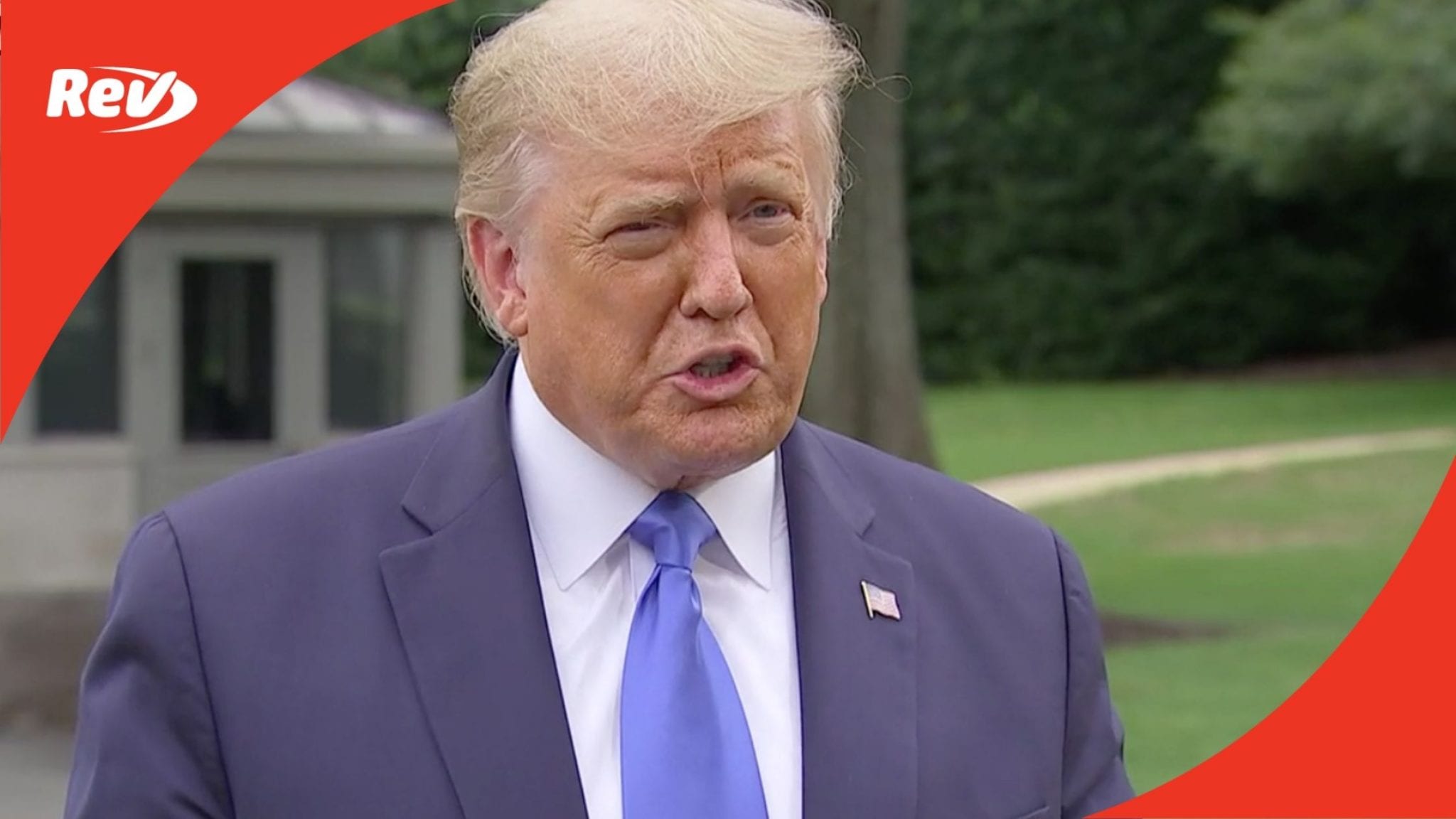 President Donald Trump spoke to reporters on September 24 before departing for Charlotte, NC. He discussed the transfer of power after the election, a coronavirus vaccine, and the unrest around the Breonna Taylor case decision. Read the transcript of his remarks here.

President Donald Trump: (00:00)
So we’re going to Charlotte, the Charlotte area, we’ll be talking about healthcare. We have a lot of good things happening with respect to health care and very positive on pre-existing conditions. Very positive on the fact that we got rid of the individual mandate, which is the single most unpopular thing having to do with Obamacare, the Obamacare disaster. But we have a lot of incredible things, positive things, and very good things and money saving things on healthcare. Then we’re going to Florida. We have a big rally and it’ll be something. I hear there’s a tremendous number of people. So we’re not totally surprised by that, but that’s okay. Tremendous number of people. Jennifer, go ahead.

Speaker 3: (01:11)
Mr. President, are the election results only legitimate if you win.

President Donald Trump: (01:16)
So we have to be very careful with the ballots. The ballots, that’s a whole big scam. They found, I understand, eight ballots in a wastepaper basket in some location they found it. It was reported in one of the newspapers that they found a lot of ballots in a river. They throw them out if they have the name Trump on it, I guess. But they had ballots.

President Donald Trump: (01:38)
Okay, well, they still found them in a river, whether they had a name on it or not. But the other ones had the Trump name on it and they were thrown into a wastepaper basket. We want to make sure the election is honest and I’m not sure that it can be. I don’t know that it can be with this whole situation. Unsolicited ballots, they’re unsolicited. Millions being sent to everybody. And we’ll see. But if you remember, Hillary Clinton just a week ago or so told Joe Biden, “Do not accept the results of the election under any circumstances.” But you don’t ask her that question. You only ask me the question.

President Donald Trump: (03:06)
Well, we have numerous companies. We have Johnson & Johnson. We have Pfizer. We have Moderna. We have others too. They’re great companies, the best in the world. So I think you’d put the people of New York at great risk. And he’s done that, if you look at the nursing homes. 11,000 people died needlessly. So when you look at that, it’s very sad. So we’ll see. He’ll have to see. But these are great companies. These are being done by, really, probably, some of the greatest companies in the world, when you think, with Pfizer, Johnson & Johnson, et cetera. I think that they are getting very close. As you know, they’re in final testing right now. Phase three, but final. They’ve given shots to everybody, to a lot, thousands and thousands of people. And so far it looks very good and it looks like it could happen fairly quickly.

President Donald Trump: (04:28)
Well, it was an honor to be a nominated for two Nobel Prizes. So that was an honor, and we’ll see what’s happening. I know that China now and India are having difficulty and very, very substantial difficulty. And hopefully, there’ll be able to work that out. If we can help, we’d love to have.

Speaker 7: (05:01)
How do you feel about some of the chanting that was going on outside the Supreme Court, vote you out, and fulfill, uphold her wish?

President Donald Trump: (05:12)
Well, I think that was just a political chant. We could hardly hear it from where we were. Somebody said there was some chanting, but they were right next to the media. But we really could hardly hear too much. We heard a sound but it wasn’t very strong.

President Donald Trump: (05:34)
I think that peaceful protest is, number one, it’s fine to do that in a peaceful manner.

President Donald Trump: (06:03)
Well, we’re speaking with a lot of people about that. I’m doing very well in Maine. You’ve seen the numbers. What I’ve done for Maine is what nobody’s done. I’ve freed up 5,000 square miles of ocean that was taken away by President Obama. And for the lobster, the people that go out and get us those great lobsters that we all like so much, I freed that whole business up and the fishermen too. We freed it up. So I think I’ve done more for Maine than just about anybody, certainly, in many, many years. So I’m doing very well in Maine. I don’t know. I haven’t seen polls on Susan. But I hope she does well. Thank you.