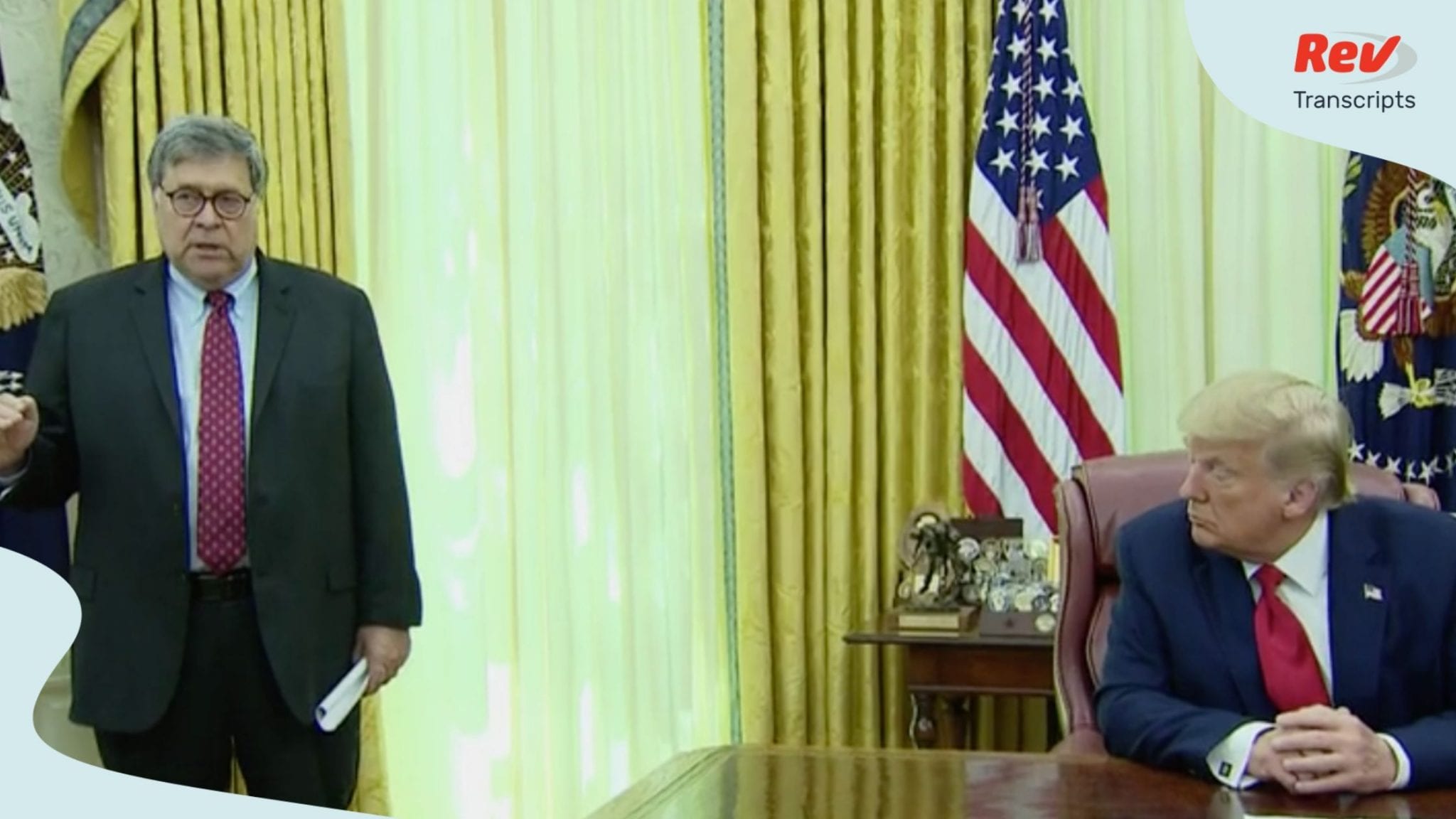 President Donald Trump: (00:00)
In the last three years ICE has deported over 16,000 gang members and arrested over 2000 members of MS-13. Think of those numbers, 16,000 and arrested over 2000 members of MS-13. We’ve also deported a lot of the MS-13s out of our country. This week’s actions by the Joint Task Force, Vulcan, is the most recent offense to… really this has been a big offensive in my administration’s war on foreign gangs of which we came into this administration and we said, “What’s going on?”

President Donald Trump: (00:35)
We had gangs from countries that you wouldn’t believe. More than 20 of the criminals we indicted and arrested in the past seven days were illegal aliens. Yesterday for the first time ever the Eastern District of Virginia, thank you very much, indicted MS-13 leaders on charges of terrorism. Well, so we have the leader on charges of terrorism. And that’s a first, is that correct?

President Donald Trump: (00:59)
… for using terrorism, which gives us extra strength. In New York and Nevada 21 MS-13 members and leaders have been indicted on charges including murder, kidnapping, and drug trafficking. The DOJ has also announced that it will seek the death penalty for a bloodthirsty MS-13 leader responsible for the despicable killing of seven Americans, including two teenage girls. Over the past few days, the DOJ and DHS have made several arrests at high, high levels in these cases including several immigration arrests. And I want to thank Chad Wolf for working along with the FBI and with the Attorney General. They’ve work very closely together at the border and the border as you know is setting new records for allowing people in that aren’t allowed to come in, allowing people in illegally.

President Donald Trump: (01:52)
We believe the monsters who murder children should be put to death. We seem to have quite a good agreement on that. These people murder children and they do it as slowly and viciously as possible. We will not allow these animals to terrorize our communities and my administration will not rest until every member of MS-13 is brought to justice. We’ve done a great job with MS-13 but now we’re stepping it up even to a higher level. This has never happened before, there’s never been any move like this before. Much of it has already taken place, otherwise we wouldn’t be talking about it.

President Donald Trump: (02:27)
When Biden and the radical left want to open borders for MS-13 and others, we want strong borders, we want as I’ve said, we want borders. Without borders you don’t have a country and we have a great country and it’s coming back stronger than ever from job numbers to every other number, it’s coming back stronger than ever before. We’re going to have a great third quarter, we’re going to have a great fourth quarter and next year is going to be one of the strongest years economically we’ve ever had.

President Donald Trump: (02:57)
I’m going ask AG Barr, say a few words about the MS-13 and what we’ve done, and what we’re doing, and where we plan to go. And next week we’re going to have I think a very exciting news conference because we’re going to be talking about some of these cities where the Democrats running them have just lost control of the city, so that’ll be very interesting. Bill, please.

AG Barr: (03:47)
MS-13 is somewhat unique in this sense. They have the street savagery that you would see in a gang. It is not driven by commercial interests the way for example the mafia traditionally was. It’s about honor of being the most savage, bloodthirsty person you can be and building up a reputation as a killer. This is in some ways is a death cult, and then they use the terror that they cause by their savagery to extort. And they’ve gotten increasingly into human trafficking and now narcotics trafficking, but that’s a sidelight to some extent to their basic purpose which is violence, terrorizing people.

AG Barr: (04:31)
Also, unlike a street gang they’re highly organized as a transnational organization. They operate with hierarchy, with programs, they call them programs, think of it as a crime family essentially. And then under each program they have different cliques. They have programs and cliques operating in the United States. While their center of gravity is in Central America there are thousands that have come into the United States illegally. They’re virtually all illegal aliens. They come in now through… although it’s harder to get across the border but traditionally they’ve come across the border into Houston and then fanned out across the United States into the different centers of activity.

AG Barr: (05:14)
Today, we were talking with the president about three actions we took. Mel [Gurdiaz 00:05:20] was indicted in the Eastern District of Virginia. First time we’ve used terrorism charges against a member of MS-13. He was responsible for activities in 13 States, 20 cliques in the United States. He was also the person who would green-light assassinations in the United States. The orders come from El Salvador, or they request to assassinate people, go down to El Salvador and he would green-light the hit.

AG Barr: (05:52)
We also took down, this was an HSI case in Las Vegas. We took down the Hollywood clique, which operated not only in Nevada but also in California and in the Eastern District of New York again, Long Island. And we took down 21 members and the leadership of that organization. And then finally… these are the New York indictees. And then finally I announced that we are going to seek the death penalty against Alexi Saenz, who is a leader in the Eastern District of New York, a leader of MS-13 there.

AG Barr: (06:41)
The president made a trip to Brentwood, New York earlier in his administration and he met with the families of victims that had been killed by MS-13, including the family of two young girls who were butchered with machetes. And the person that we are seeking the death penalty against was involved in those murders, as well as the murder of two African Americans who they just saw on the street and thought they were from a rival gang and just butchered. Those are the actions that were taken, there’s more coming as we’re going to target the leadership of MS-13. We’re working very closely with the El Salvadorians on this. They’ve been very cooperative and we have the HSI and the FBI with operations down in El Salvador.

President Donald Trump: (07:34)
In past administrations El Salvador, Honduras, Guatemala did not cooperate with the United States at all, they wouldn’t let us bring people back. And under this administration a long time ago, almost my… I would say my second or third day I said, “That’s not going to work.” They’d bring them back and they’d say, “Get them out of here, we’re not taking them.” And they don’t say that anymore. They don’t even come close to say that anymore. The operation is going to be very good. This is probably the meanest worst gang anywhere in the world, the MS-13 group. And a big dent is put in them, it took place over the last few days and really over the last year, heavy focus on MS-13. They’re an evil group of people. They’re sick, they’re deranged and we’re taking care of it. And I want to just thank these great crime fighters that are with us today. Thank you.

AG Barr: (08:23)
We have Tony, from Nevada. Next, the U.S. Attorney from Eastern District of Virginia, Zach Terwilliger. Obviously another director of the FBI, Matt Albence of the ICE, Mike Carvajal of Bureau of Prisons. You might ask the why the Bureau of Prisons, because they do like to try to operate out of prisons and we have to make sure we collect intelligence in the prison system. And then Regina Lombardo of ATF, Tim Shea of DEA, and of course, you now the Secretary of DHS, Chad Wolf.

AG Barr: (09:04)
The head of this program is John Durham Jr., from the Eastern District of New York who has spent… how many years recently, John?

President Donald Trump: (09:27)
Good luck, good luck. That’s really good, it’s so important. It’s like Central Casting. People are like Central Casting and you’re going to do a great job and we appreciate it. And we will be meeting you in a similar vein, but a little different subject next week. And that concerns our cities and again, people that have lost control of some of our great cities, we’re going to straighten things out. Thank you all very much, thank you. [crosstalk 00:09:51].

Speaker 6: (09:50)
Is everything all right about taking over cities earlier this week, is that right next week and how soon is that?

President Donald Trump: (09:56)
You’ll be seeing next week. We’ll have a conference next week and we’ll tell you in great detail but it’s something that I think at this point the American people want to see. They’ve been run very poorly, these cities, whether it’s Seattle, where we were getting ready to go in and they decided to go in and that’s good. Minneapolis, where we had the National Guard go in, and as soon as they did that we straightened that mess out. They should have been able to do it locally with their police. Their police are good, they were told not to do anything.

President Donald Trump: (10:24)
Or many other cases, we’re doing a great job in Portland. Portland was very rough and they called us in and we did a good job to put it mildly, many people in jail right now. But we have other cities that are out of control, they’re like more zones. And if the city isn’t going to straighten it out of local politicians, or in this case, I don’t say this for political reasons, they’re all Democrats, they’re liberal, left wing Democrats.