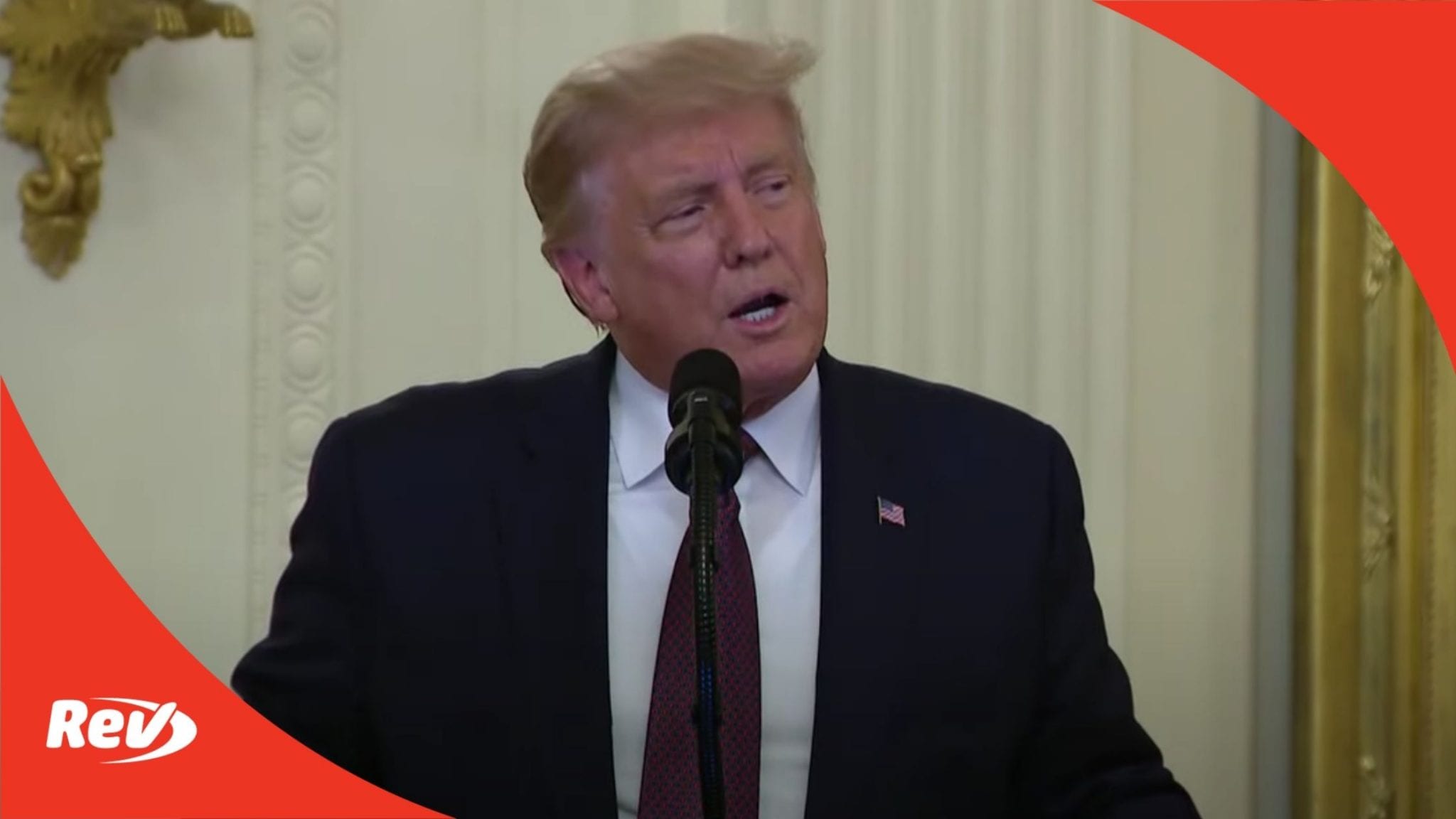 President Donald Trump presented the Medal of Honor to Sergeant Major Thomas Payne on September 11. Read the transcript of the event here.

Speaker 1: (00:57)
I invite you to join me in prayer. Almighty God, on this day of national remembrance, we pray as the psalmist of old. Deliver us, oh Lord, from evil men who plot evil things in their heart. Maintain the cause of the afflicted and execute justice for the needy. Today, we thank you for the valorous attributes and actions of Sergeant Major Patrick Payne that indeed delivered the oppressed. You are the one who placed him in a family of love in a nation he loves, fostering the pure motivation of all warriors who fight for those who stand behind them. You equipped his hands for warfare and forged within him a heart that regarded the liberty of others of greater value than his own safety. You assigned him in the ranks of those whose common bond is uncommon valor when terror needed to be boldly confronted. Your work through him not only preserved life, but preserved the legacy of his team and the ideals of our great nation. Nevertheless, we know that opposing evil comes with a great cost. So we pray that the honor of this ceremony and the ministry of your spirit would comfort the families and the teammates of Master Sergeant Josh Wheeler and Master Sergeant John Dunbar. I pray in Jesus’ name. Amen.

Donald Trump: (02:34)
Thank you very much, Chaplain. Went in a really beautiful job and thank you for your service. Please. Thank you. Today, it’s my privilege to present the Congressional Medal of Honor to a warrior who has devoted the last two decades to fighting the forces of terror. Please join me in welcoming today’s extraordinary recipient, Sergeant Major Thomas Patrick Payne. Congratulations.

Donald Trump: (03:28)
Thank you very much. We’re grateful to be joined by Pat’s really wonderful wife, Alison. And Alison, thank you very much for being here on this very momentous occasion. This is the big one. You know that. This is the big one. Also with us is Patrick and Alison’s six year old son, Aaron. Aaron, thank you for being here. He got a very nice little award back there, a beautiful pen, right? You’re going to save that pen. Thank you, Aaron. I want you to know that your dad is one of the bravest men anywhere in the world. You know that, right? You knew that before. I think you knew that before we knew it. So congratulations to both.

Donald Trump: (05:25)
That’s great. A lot of brave people are with us today. Pat grew up in a small town in South Carolina. His dad is a police officer. His grandfather served in World War II and Korea, Vietnam. Service to our country really goes through their veins very, very rapidly. Exactly 19 years ago today, on September 11, 2001, news of the attack on our nation’s great, great country. This was just an attack like a has never happened to us. But it went through Pat’s high school and went through his classroom. And Pat was sitting there listening. His teacher solemnly told the students that their generation had a fight to win. They were going to fight and fight to win. In that moment, Pat was called to action. He knew that his country needed him. 10 short months later, at the age of 18, Pat was in Army basic training at Fort Benning.

Donald Trump: (06:29)
Soon he joined the elite ranks of the legendary Army Rangers. Pat became an exceptional soldier and expert sniper. He saw heavy combat in multiple theaters of battle. In 2010, during a deployment in Afghanistan, his leg was severely wounded by an enemy grenade. While recovering in South Carolina, Pat met with his wife, Alison. Well, that was probably not a bad wound then, was it? It was worth, I hope you’re going to say it was worth it. It was less than two years after being injured, Pat competed against some of America’s toughest warriors and won the prestigious Best Ranger Competition, among the most grueling physical contests anywhere in the country.

Donald Trump: (07:15)
In October of 2015, on his 14th deployment, Pat was part of a team assigned to plan and conduct an operation to rescue over 70 Kurdish prisoners being held by ISIS barbarians in Iraq. The team soon received horrifying intelligence that the terrorists were planning to massacre their captives and bury them in freshly dug graves. Pat and his teammates raced into action. After midnight on October 22nd, Pat boarded a helicopter and departed on a mission to free the hostages from two buildings guarded by dozens of ruthless and bloodthirsty ISIS terrorists. He was in command of a team clearing one of the compounds. As soon as the ramp to his helicopter went down, Pat rushed into a blistering hail of gunfire. Pat and his team swiftly overpowered the enemy, secured the building, and freed 38 of the hostages.

Donald Trump: (08:19)
Then Pat received word that the rest of the assault team was facing harsh resistance in another complex. Pat turned to one of his fellow soldiers and said, “Let’s get into the fight right now. Let’s get into the fight.” He saw that the other building was on fire and he knew more of the hostages were still trapped inside. He and his team climbed up ladders to the roof and opened up fire on the enemy. Multiple ISIS fighters detonated suicide vests, ripping a portion of the building into pieces. But Pat and his fellow Rangers fought through the fire, the bullets and the deadly blasts. Pat navigated to the front door and saw the captives were being held behind a metal door secured by two very heavy padlocks. He grabbed a pair of bolt cutters and ran through smoldering flame and smoke. As bullets impacted all around him, Pat succeeded in cutting one of the locks before scorching, sweltering heat forced him to leave the building for some air. Pat caught his breath in a few seconds and was back.

Donald Trump: (09:28)
He ran right back into that raging blaze, he sliced the final lock and released the rest of the hostages as the building began to collapse. He received orders to evacuate, but he refused to do so. He didn’t want to leave anyone behind. Pat ran back into the burning building that was collapsing two more times. He saved multiple hostages and he was the last man to leave. He wouldn’t leave no matter what they said, no matter who ordered him to do it, he wouldn’t do it. He was the last one out. It was one of the largest and most daring rescue missions in American history. Pat and his team rescued 75 captives and killed 20 ISIS terrorists. Pat, you embody the righteous lorry of American valor. We stand in awe of your heroic, daring, and gallant deeds. You truly went above and beyond the call of duty to earn our nation’s highest military honor.

Donald Trump: (10:28)
Pat would be the first to remind us that he was not alone that day. In the battle, one army ranger made the ultimate sacrifice, Master Sergeant Josh Wheeler. Josh was something, right Pat? Josh was something. You’ve said that before. Today, we’re deeply moved to be joined by Master Sergeant Wheeler’s wife, Ashley Wheeler. Ashley, our hearts break for your loss. A great man. That was a great man. Ashley, where is Ashley? Ashley, please stand up. Thank you. Thank you very much. Thank you, Ashley. Our nation endures because fearless warriors like Josh are willing to lay down their lives for our freedom. Our children can grow up in peace because Josh had the courage to face down evil. Our debt to him and to you is everlasting. And again, thank you very much, Ashley. We appreciate it very much. We will honor him forever. You know that. Very special group of warriors, men, great men.

Donald Trump: (11:47)
Pat has said that as soon as our soldiers boots hit the ground, they are ambassadors of the American way of life. Everywhere they go, the men and women of our armed forces instill our friends with hope, our enemies with dread, and our fellow citizens with unyielding American pride. Over the course of his service, Pat has embarked on an astounding, really an astounding 17 deployments in defense of our nation. General Milley, that’s a lot, right? Is that a lot? That’s a lot. Okay. I needed that little extra confirmation. That’s a lot. He now serves as an instructor at the US Army Special Operations Command training the next generation of American warriors. Today, he joins the immortal company of our most revered American heroes. Pat, you personify the motto, “Rangers lead the way.” And you inspire us all. It is now my privilege to present Sergeant Major Thomas Patrick Payne with the Congressional Medal of Honor. I’d like to ask the military aid to come forward and read the citation. Thank you very much.

Speaker 4: (13:15)
Attention to orders. The Medal of Honor is awarded to Sergeant First Class Thomas P. Payne, United States Army, for conspicuous gallantry and intrepidity at the risk of his life above and beyond the call of duty on October 22nd, 2015. His heroism and selfless actions were key to liberating 75 hostages during a contested rescue mission that resulted in 20 enemies killed in action. Sergeant First Class Payne’s gallantry under fire and uncommon valor are in keeping with the highest traditions of military service and reflect great credit upon himself, the United States Special Operations Command, and the United States Army.

Speaker 1: (15:04)
I invite you to join me in prayer. Gracious God, thank you for the gift of liberty that you have given us, and for those who have safeguarded liberty through heroic acts for our sake and for the sake of others. Your call upon each of our lives may not be to serve as first responders or warriors on the field of battle rushing into burning buildings, rescuing others. Even still, may our participation here today and the strengthening of your spirit compel us all to live lives of honor and valor for the good of your kingdom, for the good of our own families, and for the good of the United States of America. I pray in Jesus’ name. Amen.