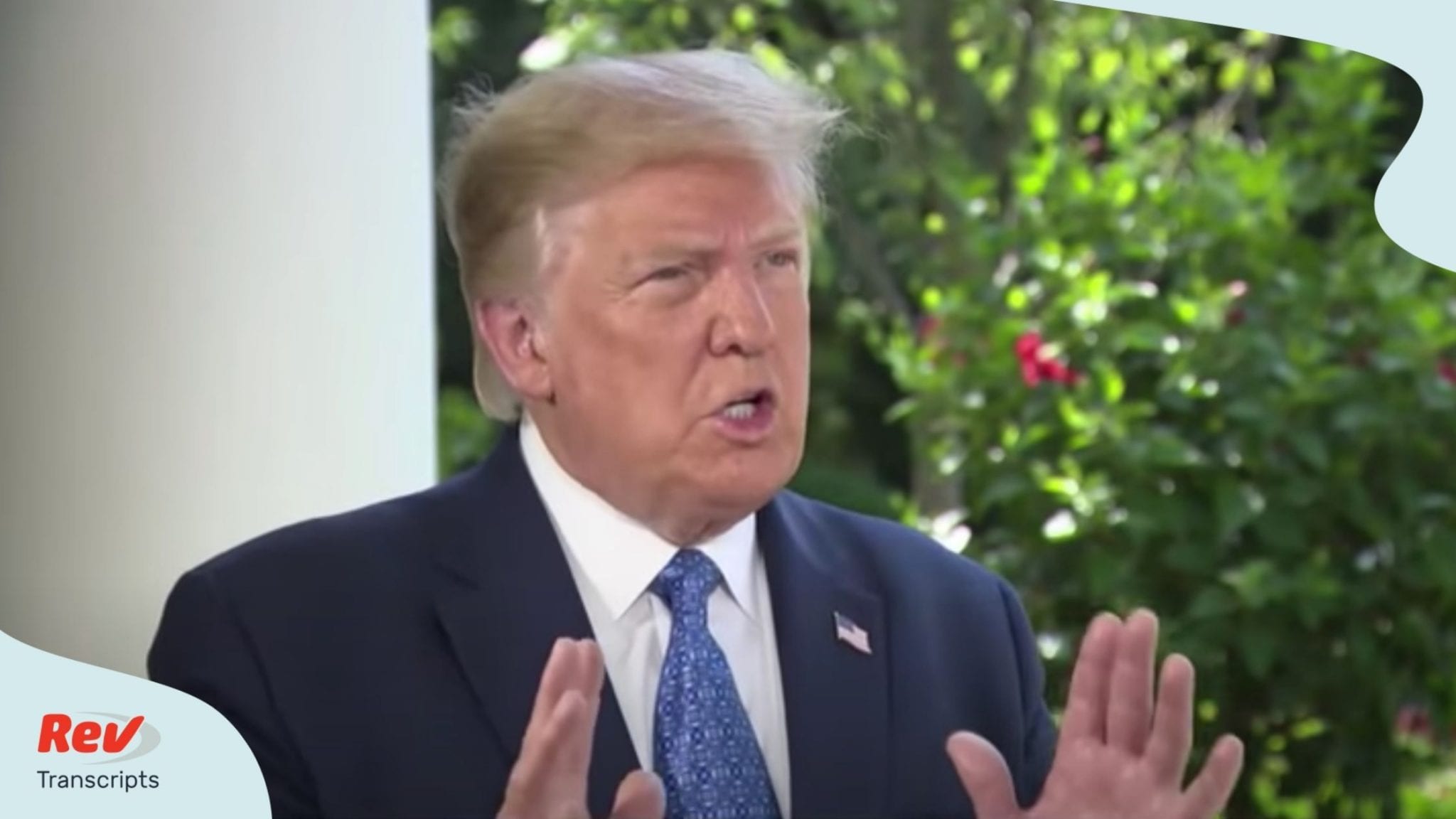 Donald Trump did an interview with Fox News where he talked about a test he took to prove his cognitive memory skills. He repeated the terms “Person”, “Woman”, “Man”, “Camera”, and “TV” several times in the interview to explain the test. Read the interview transcript here.

Interviewer: (00:00)
Presidential health or health of a candidate is going to be on the table of course as it always is. And I’ve been someone always asking for that. I’ve seen a lot about your health being in good health. What do you think should come out or be the attention regarding Vice President Biden?

Donald Trump: (00:14)
Well, I think we have to be in good health. I tell you what, this is a very important job to put it mildly. There is nothing like it and I will also say and I think I’ve had to work harder than others because I’ve been attacked from fronts that nobody ever got attacked on. With fake investigations, fake Russia, Russia, Russia, Ukraine, Ukraine. I mean nobody’s gone through and yet I’ve done more than any president in the first three years in history. There is no president that’s done what we’ve done with rebuilding the military, the judges. We’ll be up to almost 300 judges including two great Supreme Court judges at the end of this term. So it’s really something that’s been great. But you need stamina. You need physical health and you need mental health.

Donald Trump: (00:57)
And because you have so much fake news every once in a while you’d say, first they’d say, “He wants to take over the world. He’s going to take over the world. He’s a dictator.” The next day they’ll say, “He’s crazy.” The next day they’ll say, “Oh, he’s incompetent.” The next day they’ll say something. So the last time I was at the hospital, probably a year ago, a little less than a year ago. I asked the doctor, I said, “Is there some kind of a cognitive test that I could take?” Because I’ve been hearing about it because I want to shut these people up. They’re fake news, they make up stories. Like I’ll do an interview with you I didn’t say you can’t ask me about this. I say, ask me anything. I did one with Chris Wallace he was nice enough to say he said, “I just want to tell the audience there was no question that’s off bounds.” Okay and he’s a tough cookie.

Donald Trump: (01:44)
And it was a good interview. I liked it, I enjoyed it and it was good. But I didn’t say you can only ask this, you can only… We have to be sharp. If you’re in the office of the presidency, we have to be sharp. So they were saying all these different things, it was going all over. Whichever stuck, none of it stuck fortunately. But one of the reasons it didn’t is that I took a test. I said to the doctor, it was Dr. Ronnie Jackson. I said, “Is there some kind of a test an acuity test?” And he said there actually is and he named it, whatever it might be and was 30 or 35 questions. The first questions are very easy. The last questions are much more difficult. Like a memory question. It’s a like you’ll go person, woman, man, camera, TV. So they’ll say, “Could you repeat that?”

Donald Trump: (03:40)
They say, “That’s amazing. How did you do that?” I do it because I have a good memory, because I’m cognitively there. Now Joe should take that test because something’s going on and I say this with respect. I mean, going to probably happen to all of us, right? It’s going to happen, but we can’t take a chance of it happening when you’re dealing with Russia. And there’s nobody been tougher to Russia than me. Nobody been tougher to China than me I can tell you right now they would love to see Joe Biden instead of Trump. We’ve taken in billions and billions, tens of billions of dollars from China, which they never gave us anything. They had the worst year before the plague came in. They had the worst year and they’re just about in their history 67 years, it was the worst year they had in 67 years before the plague.

Donald Trump: (04:35)
And we were doing great we had the best economy. But we have to have somebody that’s sharp. If this person isn’t sharp because I can tell your president Xi is sharp, president Putin is sharp, [inaudible 00:04:48] is sharp. You don’t have any non sharp people that you’re dealing with. And we can’t have somebody that’s not a hundred percent. So what I did is you know it’s a public test and he said, “If you take this test we may have to reveal that.” I said, “It’s all right. I mean is it tough? Tell me about.” I’d never heard of it. And I got a perfect mark and the doctors they said very few people can do that. Very few people get that you understand?

Donald Trump: (05:18)
It’s not that easy. There were other questions tougher than what I just did, but it’s not that easy. But as soon as they announced my score and that test, all the stuff went away about me. Is he competent? Remember they’re talking about 25th amendment the nonsense. And they said, wow! And even the enemies they don’t say that anymore. But they do say it about Joe Biden. And honestly he should take the test in a way as an obligation too, because you have to be able to show this country that the person that we’re picking as leader is sharp. Because we’re dealing with people that want to do very bad things to us if they had the chance and you have to be sharper than them. So in a certain way Joe Biden has an obligation to take a test like that one or something else.