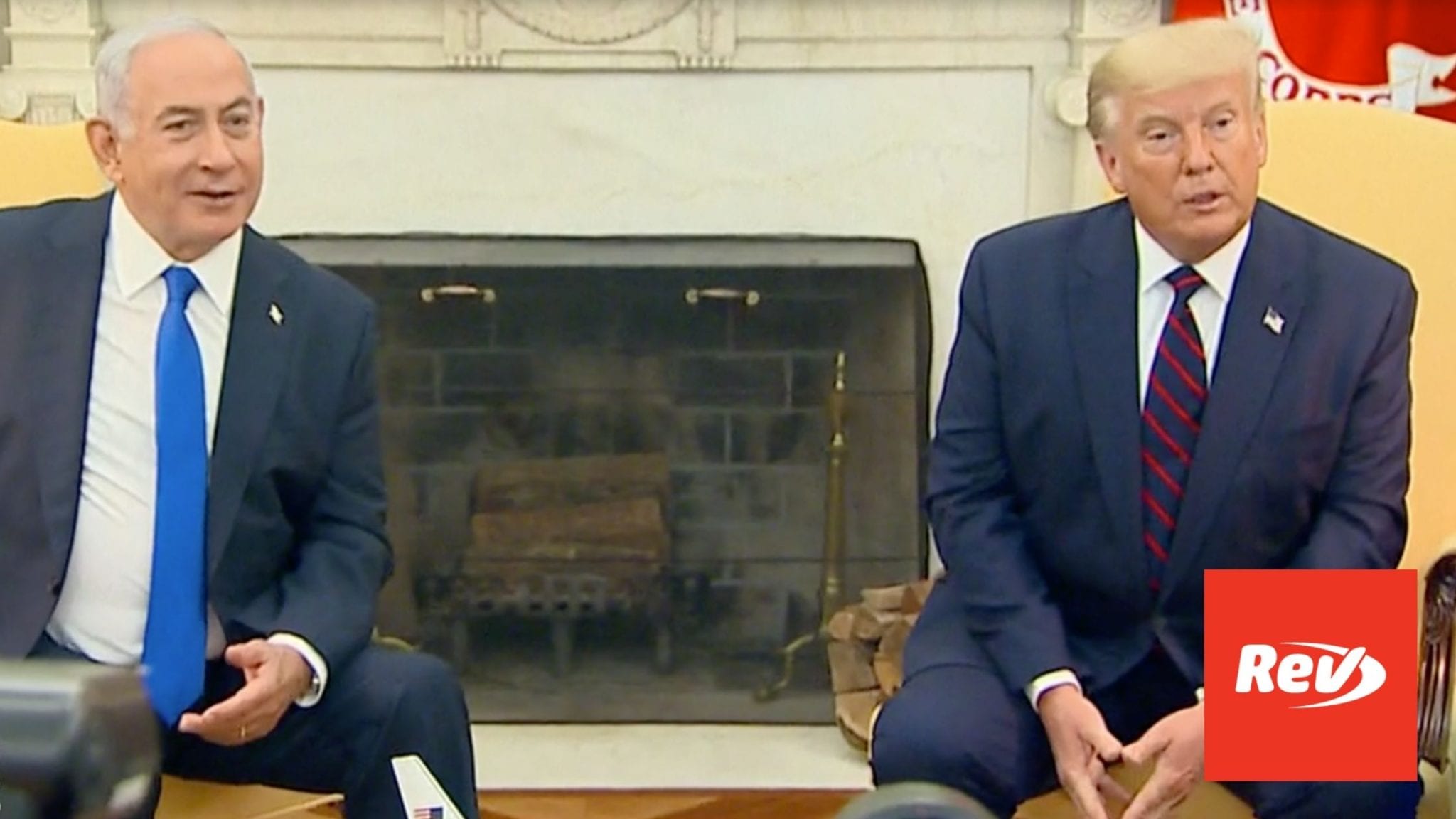 Prime Minister Benjamin Netanyahu: (00:00)
So, thank you. Thank you.

President Donald Trump: (00:01)
Thank you very much. Fantastic. Now we look forward to being outside. Yes, please. Any question?

Speaker 3: (00:12)
[crosstalk 00:00:08]. This is a great event and these are tremendous achievements and we know that Israel is getting a lot. What is Israel giving back?

President Donald Trump: (00:23)
Well I think what really Israel is getting… I think what Israel is getting and what we’re all getting, but what Israel is getting more than anything else is peace. They’re going to have peace. As you know, UAE, United Arab Emirates, is a great warring nation, a very powerful nation in the region, and they very much wanted to do this. Muhammad’s a tremendous leader like Bibi is a tremendous leader and it was important to have them first, very early. And the relationship is fantastic and a lot of people are surprised to see it. And as you know, we have Bahrain and we have many nations ready to follow, many nations. I can’t, no, not now. I won’t, but you’ll see and we’ll be signing up other nations. And these are very strong agreements. These are very strong. This is really peace. This is serious peace. And so I think what Israel gets, the most important thing that they’re getting by far is peace. [crosstalk 00:01:24]. Excuse me. One at a time please.

Prime Minister Benjamin Netanyahu: (01:25)
Take the other one.

President Donald Trump: (01:38)
It will be announced. We are very far down the road with about five countries, five additional countries. Frankly, I think we could have had them here today. We thought out of respect, UAE, they deserved it. And Bahrain came immediately after. They really wanted to do it, but we’ll have at least five or six countries coming along very quickly and we’re already talking to them and they want to see peace. They’ve been fighting for a long time. They’re tired. They’re warring countries, but they’re tired. They’re tired of fighting. And so you’re going to be seeing further announcements. It’s a very big day. I guess they said so there were two countries over a 72 year period and we did an additional two and these are great countries. We did an additional two and one month.

President Donald Trump: (02:42)
Yeah, we’re going to work that out. We’ll work that out. That’s going to be an easy thing. And we’ve fought with UAE four times, four different wars. They’ve been very, very loyal to us and we have a better relationship with them now than we ever had in the past. In fact, in the past, it was strained. We have a very good relationship with them. Yeah. All of that works out. That’s going to be very easy to work out, yeah.

Speaker 6: (03:05)
[crosstalk 00:03:09]. Should Israel feel less isolated today than they were this last week? And Mr. Prime Minister, maybe you can answer that question as well.

President Donald Trump: (03:16)
Well, I think Israel is not isolated anymore because I can tell you we have the two countries, plus you had an additional two as you know, from many, many years ago. And now you have a situation where many of the countries, and I can actually say most of the countries, but many of the countries in the Middle East want to sign this deal. And I think when that happens, hopefully after the election, because I really believe Iran wants to make a deal. They’ve had a very tough time. Their GDP is down 27% because of the sanctions and all of the other things and I don’t want that to happen. I want Iran to be a great country, a great nation. I think that would be a wonderful thing. But I think, and I’ve even said that. I’ve said that to representatives of them, you should wait to see the election first.

Speaker 7: (04:58)
You believe you will also grow a great deal with the Palestinians?

President Donald Trump: (05:01)
Yeah, I think they come along and they’re already. Obviously, we speak to them. They’ve come a long way. We used to pay them $750 million a year when I got here. And I said to people that negotiated with them before, “Why did you pay when they treat the United States with such disrespect?” They speak so badly. Death to America, death to Israel. I said, “We give them 750 million a year?” I said, “Why didn’t somebody cut off those payments?” Well, we didn’t think it would be appropriate. I said, “Well, I do.” And I cut off the payments to them as you know, but other countries give them money. You’re dealing with very rich countries and these countries are now all signing with us. They’ll all be signed with us. All of them. I spoke with the King of Saudi Arabia. We had a great conversation and I think positive things will happen there too.

President Donald Trump: (05:49)
He’s a great gentleman. And the Crown Prince, we spoke with the Crown Prince. So we’ve made tremendous strides and this is peace in the Middle East without blood all over the sand. I say it. Right now, it’s been blood all over the sand for decades and decades and decades. That’s all they do is they fight and kill people and nobody gets anything. And this is strong peace, really strong peace. And it’s a different way. We went into the backdoor, but I call it going into the very smart door. We went in the smart door and we’re getting people and the Palestinians will absolutely be a member. I don’t say that with any bravado. I just tell you the Palestinians will be a member at the right time, at the right time. [crosstalk 00:06:35].

President Donald Trump: (06:37)
We’re working a deal. We are talking to the Palestinians. At the right time, they’ll be joining too.

Speaker 7: (06:47)
And as long as you’re president, is annexation of the table? Is that something-

President Donald Trump: (06:47)
We don’t want to talk about that right now, but that’s working out very well and very fair and very good for the people that are coming in and for Israel. And again, Israel wants peace and they’re a great warring nation if they have to be. You see that. They have the best equipment. They have the best of everything, but they don’t want this. After all of these years, even Bibi gets tired of war, but they’ve been… Look, they’re a strong nation, a strong power, a strong military nation, but they want to get on with their lives. Israel wants peace. They really want peace. And I give this gentleman a great deal of credit. He’s done a great job.

Prime Minister Benjamin Netanyahu: (07:24)
Thank you. Mr. President, I heard a question from one of the people here. Does Israel feel isolated? Heck no. We’re breaking out to the entire world because we have a strong, free economy, because we have a strong military, because we have a strong relationship with the president of the United States and the American people. And I can tell you that we have a strong relationship throughout the Middle East. The President intimated how many countries are waiting to join the circle of peace. Israel doesn’t feel isolated at all. It’s enjoying the greatest diplomatic triumph of its history. I think the people who feel isolated are the tyrants of Tehran because of the pressure that the President has applied on them, because of the resistance to this bad Iran deal. They’re under pressure. And I hope they’ll all come around. I hope everyone will come around to the circle of peace, but no, we don’t feel isolated at all. Quite the contrary.

President Donald Trump: (08:21)
I would say this, there’s less isolation right now for Israel than there’s ever been. I mean, today, they would be less isolated than ever been. I want to just thank your great ambassador. Ron. thank you very much. How do you feel about isolation? I think you’re starting to see the light, huh?

Ron: (08:35)
I can imagine what will happen when everyone’s courting Israel if this is what isolation looks like.

President Donald Trump: (08:40)
Yeah, that’s good. We love Israel and I’ll tell you what, I have great respect for the countries that have stepped up so beautifully. And you’re going to see that in a little while we’re having a ceremony and thank you all for being here. Thank you very much.