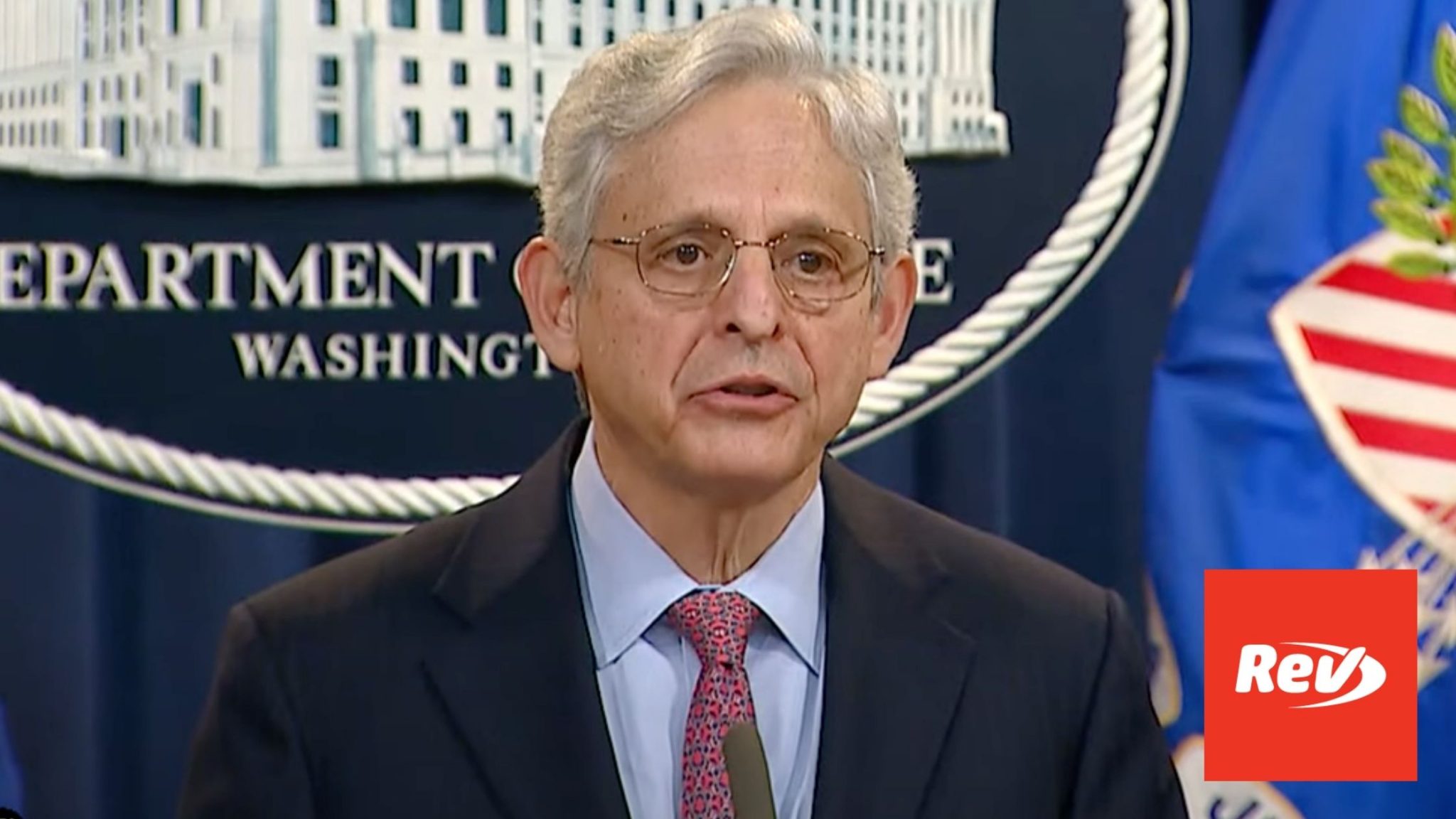 Merrick Garland: (00:04)
Good afternoon, thank you for coming. Today The Justice Department has filed suit against the state of Texas for violating section two of the Voting Rights Act. As the Supreme Court has observed, a core principle of our democracy is that quote, “Voters should choose their representatives, not the other way around.” Close quote.

Merrick Garland: (00:25)
Section two of the Voting Rights Act requires that state voting laws, including laws that draw electoral maps, provide eligible voters with an equal opportunity to participate in the democratic process and elect representatives of their choosing.

Merrick Garland: (00:40)
The complaint we file today alleges that Texas has violated section two by creating redistrict vote dilution. Vote dilution occurs when an electoral practice minimizes or cancels out the voting strength of members of a racial group or language minority group. When we issue that guidance, I noted that discriminatory redistricting schemes are illegal, and that the department would assess jurisdiction’s compliance with those laws during this redistricting cycle.

Merrick Garland: (01:10)
The department’s career voting law experts have assessed Texas’s new redistricting plans, and determined that they include districts that violate the Voting Rights Act.

Merrick Garland: (01:21)
Last month we filed a separate lawsuit against the state of Texas, alleging that Texas Senate Bill One improperly restricts the assistance voters who have a disability, or who are unable to read or write, can receive in the voting booth.

Merrick Garland: (01:36)
Last week we filed a statement of interest in Arizona litigation, to explain that private plaintiffs had plausibly alleged that certain new voting laws in that state were passed with a discriminatory purpose. We also filed a statement of interest in Florida litigation explaining, among other things, that private parties can bring claims to enforce the voting rights act.

Merrick Garland: (01:59)
In all of these matters, we have carefully assessed the facts and the law before taking action. I am grateful to the dedicated staff of the voting section for their work today and every day to protect the right of all eligible citizens to vote. Before I conclude I want to, again, urge Congress to restore the justice department’s pre-clearance authority. Were that pre-clearance tool still in place, we would likely not be here today announcing this complaint.

Merrick Garland: (02:31)
I will now turn the podium over to Associate Attorney General Gupta. Thank you.

Vanita Gupta: (02:41)
Thank you, Attorney General Garland. The right to vote is foundational to our democracy, and The Justice Department is charged with protecting that right. Today we are filing suit against the state of Texas based on our determination that Texas’s 2021 redistricting plans violate section two of the Voting Rights Act.

Vanita Gupta: (03:02)
The department reached that determination after a careful assessment of the facts and the law. I want to thank the career staff of the Civil Rights Division’s voting section for their tremendous efforts on this investigation. Our complaint today alleges that the redistricting plans approved by the Texas state legislature, and signed into law by the governor, will deny black and Latino voters an equal opportunity to participate in the voting process, and to elect representatives of their choice in violation of the Voting Rights Act.

Vanita Gupta: (03:34)
Our complaint also alleges that several of those districts were drawn with discriminatory intent. Texas’s 2021 redistricting plans were enacted through a rushed process, with minimal opportunity for public comment, without any expert testimony, and with an overall disregard for the massive minority population growth in Texas over the last decade.

Vanita Gupta: (03:57)
Texas’s population grew by 4 million people from 2010 to 2020, and 95% of that growth came from minority populations. Despite this significant increase in the number and proportion of eligible Latino and black voters in Texas, the newly enacted redistricting plans will not allow minority voters an equal opportunity to elect representatives of their choice.

Vanita Gupta: (04:23)
Instead, our investigation determined that Texas’s redistricting plans will dilute the increased minority voting strength that should have developed from these significant demographic shifts. For example, Texas will gain two new congressional seats because of its population growth, almost all of which is due to growth in the state’s minority population. However, Texas has designed both of those new seats to have white voting majorities.

Vanita Gupta: (04:50)
The congressional plan also deliberately reconfigured a west-Texas district to eliminate the opportunity for Latino voters to elect a representative of their choice.

Vanita Gupta: (05:01)
This is the third time in three decades where Texas has eliminated a Latino electoral opportunity in this same district, despite previous court determinations that this violates the law. And the state house plan eliminated Latino electoral opportunities by manipulating or eliminating districts where Latino communities previously had elected their preferred candidates.

Vanita Gupta: (05:25)
These redistricting plans will diminish the opportunities for Latino and black voters in Texas to elect their preferred representatives, and that is prohibited by federal law. The complaint asks the court to prohibit Texas from conducting elections under the challenged plans, and ask the court to order Texas to devise and implement new redistricting plans that comply with section two of the Voting Rights Act. The complaint also asks the court to establish interim plans pending a lawful state redistricting.

Vanita Gupta: (05:57)
This is not the first time Texas has acted to minimize the voting rights of its minority citizens. Decade after decade, courts have found that Texas has enacted redistricting plans that deliberately dilute the voting strength of Latino and black voters, and that violate the Voting Rights Act.

Vanita Gupta: (06:15)
The Attorney General has made clear that the justice department will not stand idly by in the face of unlawful attempts to restrict access to the ballot. Today’s filing demonstrates that commitment to this charge. The justice department stands ready to protect the constitutionally guaranteed voting rights of Americans in Texas, and indeed throughout the country. Thank you.

Speaker 4: (06:42)
Attorney General Garland, we’ve learned that you’re going to meet later on today with Emmett Till’s family to discuss the final investigative report. What will you tell them?

Merrick Garland: (06:54)
So I can confirm that the assistant Attorney General Clark is in Chicago now meeting with the family. And we’ll have more to say this afternoon after the meeting.

Speaker 5: (07:07)
Mr. Attorney general, without section five, what challenge do you face in showing that these changes are intended to affect minority turnout, rather than just to achieve partisan advantage?

Merrick Garland: (07:19)
Without section five, there are two problems. One, it means that we don’t get a chance to look at these things before they go into effect, which is a very significant aspect of our tools, and instead requires that we challenge every case individually. And second flips the burden of proof. So those are the two most significant changes caused by the Shelby County case.

Speaker 6: (07:47)
Mr. Attorney General, I wanted to ask you about Special Counsel John Durham’s investigation. In the last few weeks or months there have been two indictments that his office has released. Do those indictments go through the same view and approval process here in the Justice Department as ordinary indictments?

Merrick Garland: (08:06)
So the regulations regarding special counsel are pretty clear about what Mr. Durham does. And I don’t want to say anything more beyond what’s in the regulations, but we are following the regulations.

Speaker 7: (08:25)
Mr Attorney General can I just ask you real quick, what is your reaction, as the chief law enforcement officer of the country, to see this rise in crime? Your home city of Chicago, more than a thousand people killed. What’s your reaction? What’s the plan?

Merrick Garland: (08:35)
Well, it is a terrible thing. And it’s a rise in crime began last year, and it’s continued into this year. As you no doubt know, I visited my home city of Chicago, when we established a gun violence, trafficking task force there. And I met with chief of police, I met with all of the federal law enforcement, and I met with the state and local law enforcement. In last May of this year, we announced an anti violent crime initiative, which focuses very much on establishing these kind of joint task forces with state and local police agencies, combined with all of our federal law enforcement. So that all the tools available to the department are used to help our state and local partners.

Merrick Garland: (09:23)
We also have reinvigorated the safe street task forces, which have been in effect for quite some time. All of which is to say that this bothers me very much, and the violent crime increase is one that we must address that we are putting all of our resources toward. Thank you.