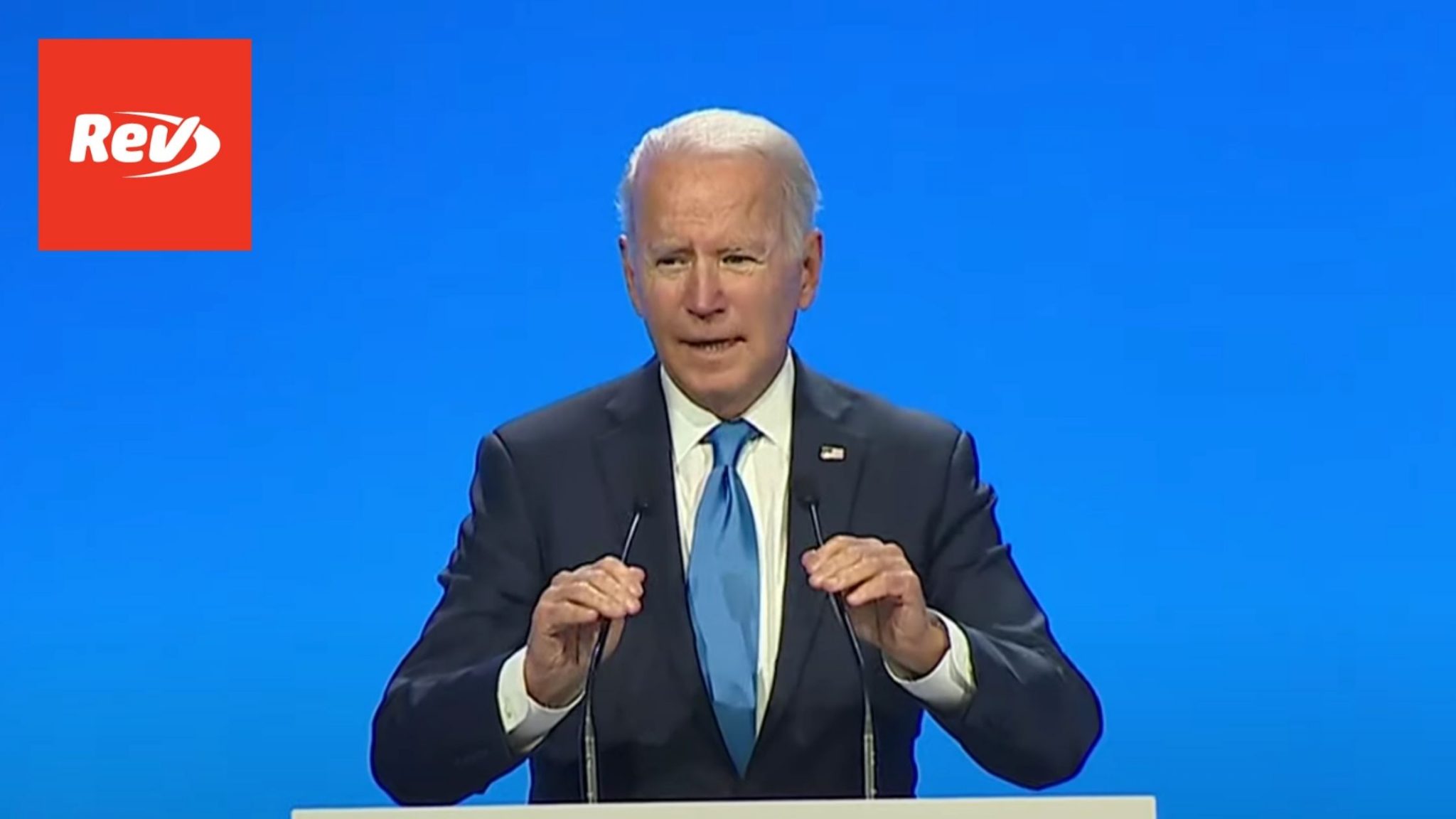 Countries responsible for half of the world’s methane emissions agreed to cut methane by at least 30% by 2030 at the COP26 in Glasgow on November 2, 2021. Read the transcript of President Joe Biden’s speech here.

Ursula: (00:01)
What a pleasure to be here with your excellencies, distinguished guests. My fellow leaders, ladies and gentlemen, when we talk about climate action, we look at two different horizons. There’s one, of course, of climate neutrality by mid-century, but there’s a second one, and that’s the closer one, and this is much more urgent. And this is the horizon of 2030. We have to act now. We need big structural changes, yes, to reach 2050 planet neutrality, but we cannot wait for 2050. We have to cut emissions fast and methane is one of the gases we can cut fastest. Doing that will immediately slow down climate change because we all know methane is a powerful greenhouse gas. Roughly 30% of global warming since the Industrial Revolution is due to methane emissions. Methane is 80 times more global warming than CO2 and today global methane emissions grow faster than at any time in the past. So cutting back on methane emissions is one of the most effective things we can do to reduce near term global warming and keep 1.5 degree celsius. It is the lowest hanging fruit.

Ursula: (01:38)
On September 17th, when new President Biden, dear Joe, hosted us for the Major Economies Forum, the European Union and the United States announced the Global Methane Pledge. Since then our climate envoys, John Kerry and [inaudible 00:01:56], have worked intensively, tirelessly to gather support. And today, just over six weeks later, we are officially launching our methane pledge and we are proud and happy and grateful that over 80 countries have signed up. This is fantastic thanks to you. Together, these over 80 countries commit to reduce global methane emissions by at least 30% by 2030 from 2020 levels on. Methane emissions come from various sources. We all know oil, gas, coal, agriculture, and land fillings. These sectors have different potential for short term action. The greatest potential for cuts is without any doubt in the energy sector.

Ursula: (04:12)
There are clear benefits to cutting methane emissions, yes, for the planet, but also so much for the people too. Because if we deliver on this pledge, we can prevent over 200,000 premature death. We can prevent hundreds of thousands of asthma related emergency room visits and over 20 million tons of crop losses a year by reducing ground level ozone pollution. I want to thank all those countries that have signed up to the Global Methane Pledge. With this global pledge, we are making COP26 the moment when the world moves from aspiration to action. And now it’s my pleasure honor to leave this podium for you, Mr. President, dear Joe. Thank you.

Joe Biden: (05:18)
It is very easy to follow Ursula and she says it all well the first time. Look, I’m going to be very, very brief. I want to thank Ursula and thank you so much to everyone here today for signing this game changing commitment. One of the most important things we can do, and I keep referring as many of you do to this decisive decade, we’ve got to figure what we’re going to do. It’s not just between now and 2050, what we’re going to do between now and 2030, is going to impact significantly on whether we’ll be able to meet our longer term commitment. And one of the most important things we can do in this decisive decade is to keep 1.5 degrees in reach and to reduce our methane emissions as quickly as possible. As it has already been stated, it’s one of the most potent greenhouse gases there is in. It amounts to about half the warming we’re experiencing today in just methane exposure. So together we’re committing to collectively reduce our methane by 30% by 2030, and I think we could probably go beyond that.

Joe Biden: (06:28)
We just announced this package to the General Assembly back in September. At the time, it was mentioned nine country that signed on. Today, it’s over 80. It’s approaching 100 countries that are signing on. That’s nearly half the global methane emissions. They’re 70% of the global GDP. And it is going to make a huge difference, and not just when it comes to any climate change, as Ursula pointed out, physical health of individuals and whole range of other things. It’s going to improve health, reduce asthma respiratory related emergencies. It’s going to improve the food supply as well by cutting crop losses and related ground level pollution. And it’s going to boost our economies, saving companies money reducing methane leaks, capturing methane to turn it into new revenue streams, as well as creating good paying union jobs for our workers.

Joe Biden: (07:28)
We’re talking about jobs to manufacture new technologies for methane detection, jobs for union pipe fitters and welders to go out and cap abandoned oil wells and plug leaking pipelines, which there’s thousands of miles of those, and it has been a foundational commitment of my administration from the beginning. It’s something that I campaigned on and today I’m announcing the next steps to reduce U.S. methane mission. We’re proposing two new rules. One through our Environmental Protection Agency that’s going to reduce methane losses from new and existing oil and gas pipelines and one through the Department of Transportation to reduce wasteful and potential dangerous leaks from natural gas pipelines. They have authority over that area. We’re also launching a new initiative to work with our farmers and our ranchers to reduce climate spared agriculture practices and reduce methane on farms, which is a significant source as well.

Joe Biden: (08:33)
And this is all part of our new methane strategy, which focuses on reducing the largest source of methane emissions while putting thousands of skilled workers on the job all across the United States and I expect in your countries as well. So let me close again by reiterating this isn’t just something we have to do to protect the environment and the future. It’s an enormous opportunity for all of us, all of our nations, to create jobs and make meeting climate goals a core part of our global economic recovery as well. The United States is eager to work with each of you to make sure we meet this goal and encourage more countries to join us in committing to reducing methane globally, because there’s more that can’t join and should. So I want to thank you again. Much more to say but much of it’s already been said, but thank you for your partnership, thank you for your ambition, and now I’m going to turn it back to Secretary Kerry. I believe he’s still here. There he is. And I thank you all so very much.