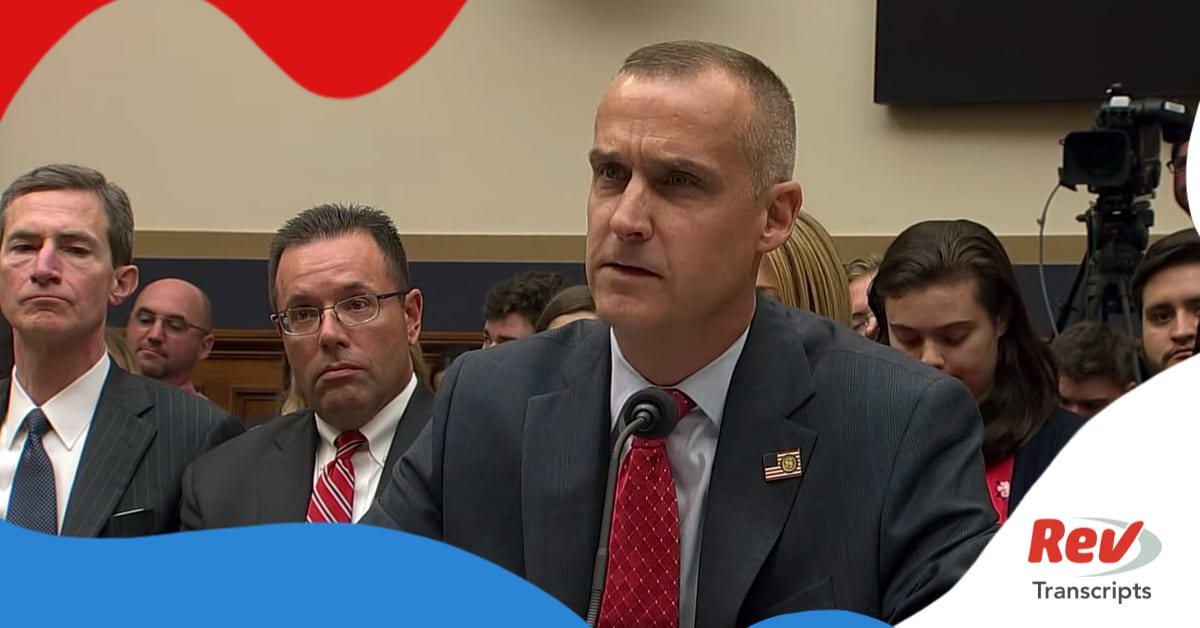 The House Judiciary Committee held an impeachment investigation hearing on September 17, 2019. The testimony was by Corey Lewandowski, who was formerly the campaign manager for the Donald Trump campaign. Read the full transcript of his opening statement below.

Jerry Nadler: (00:00)
Do you swear or affirm under penalty of perjury that the testimony you’re about to give is true and correct to the best of your knowledge, information and belief? So help you God. Let the record show that the witness has answered in the affirmative. Thank you and please be seated. Please note that your written statement will be entered into the record in its entirety. Accordingly, I ask that you summarize your testimony in five minutes. To help you stay within that time, there’s a timing light on your table. When the light switches from green to yellow, you have one minute to conclude your testimony. When the light turns red, it signals your five minutes have expired. Mr. Lewandowski, you may begin.

Corey Lewandowski: (00:39)
Chairman Nadler, Ranking Member Collins and members of the committee, good afternoon? I’d like to start off by expressing my hope that today’s hearing will be productive in revealing the truth both to the committee and to the American people. For the record, and as you likely know, I have already testified before Congress on three separate occasions. I sat at length with the staff at the Special Counsel’s Office. There too, my time and answers were given freely and without hesitation. I think in one form or another, I’ve already answered questions for well over 20 hours.

Corey Lewandowski: (01:12)
So now here I am before the House Judiciary Committee to answer the same questions again. Just last week, this committee, over the objections of the minority, unilaterally changed the rules to make this an impeachment proceeding, which is very unfair. However, in the spirit of cooperation, I am prepared to move forward today. I’d like to start by recounting the events that brought us to this point.

Corey Lewandowski: (01:34)
My story of joining the Trump campaign, working through a historic election, and continuing to have the privilege to be part of the greatest political movement in our nation’s history. I present this summary in the interest of truth and transparency to the American people. The very same reason and rationale that this committee offers as the basis for today’s hearing.

Corey Lewandowski: (01:55)
Growing up in a blue collar, single parent family in Lowell, Massachusetts, I learned the value of hard work. And that work ethic helped me to put myself through both college and graduate school, prior to becoming a congressional staffer and ultimately a certified peace officer in the State of New Hampshire. However, the world of politics was always a passion and in January of 2015, Donald J. Trump, then a private citizen, hired me to help him explore a possible run for the presidency. It was an honor and a privilege to play a small part of such a historic campaign.

Corey Lewandowski: (02:26)
The campaign started as a small group of individuals helping Mr. Trump to make the decision in June of 2015 to ride down the golden escalator and seek the Republican nomination for presidency of the United States. For more than a year, I served as campaign manager to then candidate Trump and his historic campaign where I led a lean and dedicated operation that succeeded in helping him capture the Republican nomination. My job was simple. Provide Mr. Trump with my best advice, spend his money like it was my own, and give him the support he needed to win. I also set long term objectives and managed day-to-day decisions.

Corey Lewandowski: (03:04)
I had the privilege and it was a privilege of helping transform the Trump campaign from a dedicated but small makeshift organization to a historical and unprecedented political juggernaut. And I am proud to say Mr. Trump won 38 primaries and caucuses and received more votes than any candidate in the history of the Republican party, all while being outspent most of the way. The historic campaign helped Mr. Trump secure the Republican nomination and ultimately the presidency of the United States.

Corey Lewandowski: (03:33)
However, since election day, whether it was bad actors at the FBI and the intelligence community or lies coming from members of the current house majority that there was evidence of collusion, the American people continue to be sold a false narrative with the purpose of undermining the legitimacy of the 2016 election results. But no matter the size, campaigns are not always the most efficient organizations. And while you run in single congressional districts, just imagine what it’s like to lead a national campaign that spans all 50 states of the union.

Corey Lewandowski: (04:03)
During my time as campaign manager, there were competing interests for the candidate’s time and a sea of ideas; some laudable, some sound, a few not so much, many of which were dismissed out of hand. Others were passed on to staffers to be handled. I also received hundreds of thousands of emails, some days with as many as a thousand emails. And unlike Hillary Clinton, I don’t think I ever deleted any of those. Many of them were responded to with either one word answers or forwarded to other staffers for additional followup. But throughout it all, and to the best of my recollection, I don’t ever recall having any conversations with foreign entities, let alone any who were offering to help to manipulate the outcome of an election.

Corey Lewandowski: (04:44)
As I’ve said publicly many times, anyone who attempted to illegally impact the outcome of an election should spend the rest of their life in jail. And let me stress this fact. During the 2016 election cycle, Mr. Trump held no elected position. He was not a government official. Rather, the Obama Biden administration and the intelligence community overseen by James clapper, Jim Comey and John Brennan had the responsibility to the American people to ensure the integrity of the 2016 election.

Corey Lewandowski: (05:13)
I will leave it to this committee and the American public to decide how successful or not they were in doing their jobs. Regardless, as a special counsel determined, there was no conspiracy or collusion between the Trump campaign and any foreign governments either on my watch or afterwards. Not surprisingly, after the Mueller Report was made public, interest in the fake Russia collusion narrative has fallen apart.

Corey Lewandowski: (05:37)
In conclusion, and it’s sad to say, this country has spent over three years and 40 million taxpayer dollars on these investigations, and it’s now clear that the investigation was populated by many Trump haters who had their own agenda to take down a duly elected president of United States. As for actual collusion or conspiracy, there was none. What there has been, however, is harassment of this president from the day he won the election.

Corey Lewandowski: (06:03)
We as a nation would be better served if elected officials like yourself concentrated your efforts to combat the true crises facing our country as opposed to going down rabbit holes like this hearing. Instead of focusing on petty and personal politics, if the committee focuses on solving the challenges of this generation, imagine how many people we could help, or how many lives we could save. As I stated earlier, I voluntarily appeared in front of Congress on three separate occasions and spoken to members of the Special Counsel’s Office for multiple hours. I will continue to be forthright and cooperative, and I will be as sincere in my answers as this committee is in its questions.