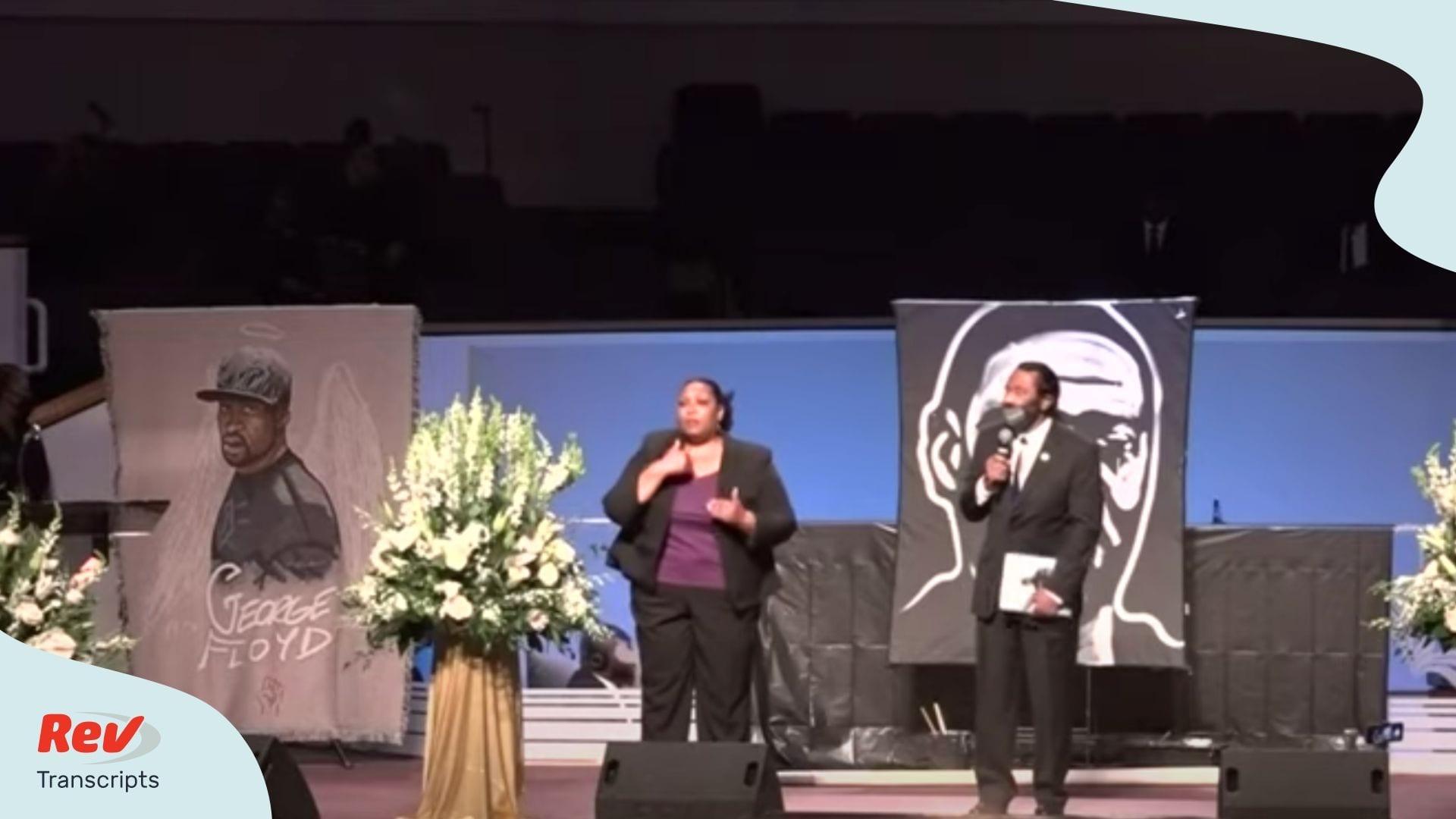 Congressman Al Green: (00:01)
To this family, the Floyd family. To Reverend Al Sharpton, the voice for the hopeless, help for the helpless and power to the powerless. I think you merit some love to all of the things that you do. To Attorney Crump who takes on the cases that many people would conclude are lost causes but you do it and you win because you fight. I think you deserve some love.

Congressman Al Green: (00:55)
Just a few more. We are honored today, here in the Ninth Congressional District, to have the chairperson of the Conscience of the Congress, The Honorable Karen Bass is with us. She has traversed some distance. Would you please show her and the members of the CBC some love. Would you please stand? This is my congressional district. I want all of the congresspeople who are here to stand please. Show them some love. My colleague Jackson Lee is here. Thank you to Mayor Turner, my dear friend and fraternity brother. To Judge Hidalgo, the commissioners. To all of the members of the council. I want to say a special word about another great American who is here with us today. One whose name means helper of humankind. One who was there with Dr. King, one who was the father of the Civil Rights Movement right here in Houston, Texas. One that we know and love, The Honorable William Alexander Lawson. He deserves some love. He is in the house today. The Honorable William Alexander, helper of human kind, Lawson.

Congressman Al Green: (02:31)
I missed Commissioners Ellis and Garcia, to you as well, dear brothers. To the friends and family again, I’m not here today as a Democrat. We are not here as Republicans. We are not here because we are rich or poor, we are not here because we are conservative or liberal. We are here because Pastor Remus Wright was so right when he said we have no expendables in our community. George Floyd was not expendable. This is why we are here. His crime was that he was born black. That was his only crime. George Floyd deserved the dignity and the respect that we accord all people simply because they are children of a common God, and it’s very unfortunate that we have to be here, but we’re going to celebrate the life of George Floyd today. And to the family, it’s important that I say this to you. We who are here today are here to say we stand with you, we will be there for you, let’s let them know they are not alone, let’s give them some love, let’s say to this family, we are here to stay. Say it for the family please with some love. Give them some love please, the family.

Congressman Al Green: (04:07)
I believe you can do better than that. If you love them and you know it, why don’t you stand up and show it? Let’s make it clear that we are here for them, that we will make it known to the world that they are not going to suffer because we are going to support them, and finally this. Members of Congress have the privilege of having flags flown over the Capitol. We do it for important occasions, important people, but I want you to know this. I had this flag flown over the Capitol because I want the United States of America to respect George Floyd. That’s why this flag was flown. I want the United States of America to show him the respect that he richly earned simply because he was born in this country, because he’s a human being, and because he is not expendable. That’s why this flag was flown.

Congressman Al Green: (05:21)
I have a resolution that will be presented to the family, and this resolution will become a part of the records of the Congress of the United States of America. This resolution is going to say to those who look through the vista of time, that at this time, there lived one among us who was a child of God, who was taken untimely, but we are going to make sure that those who look through time, that they will know that he made a difference within his time because he changed not only this country, not only the United States, he changed the world, George Floyd changed the world, and we’re going to make the world now that he made a difference.

Congressman Al Green: (07:13)
So brothers and sisters, the Congressional Black Caucus has done something that’s historic. The Honorable Karen Bass and her leadership, we have now a law that makes it against the law to put your foot on the neck of a person. It’s against the law. You can’t have a no-knock law, it’s against the law. You’re going to have to wear your body cameras, it’s against the law. The Congressional Black Caucus is making a difference, but I believe there’s one more thing that we ought to do to make a difference. We have got to have reconciliation. This country has not reconciled its differences with us. We survived slavery but we didn’t reconcile. We survived segregation but we didn’t reconcile. We’re suffering [inaudible 00:08:10] discrimination because we didn’t reconcile. It’s time for a Department of Reconciliation in the highest land, the highest office, it’s time to have someone who’s going to make it his or her business to seek reconciliation for black people in the United States of America every day of his life. That’s what this is all about. It’s time for us to reconcile. We need a Department of Reconciliation. God bless you. God bless the United States of America.