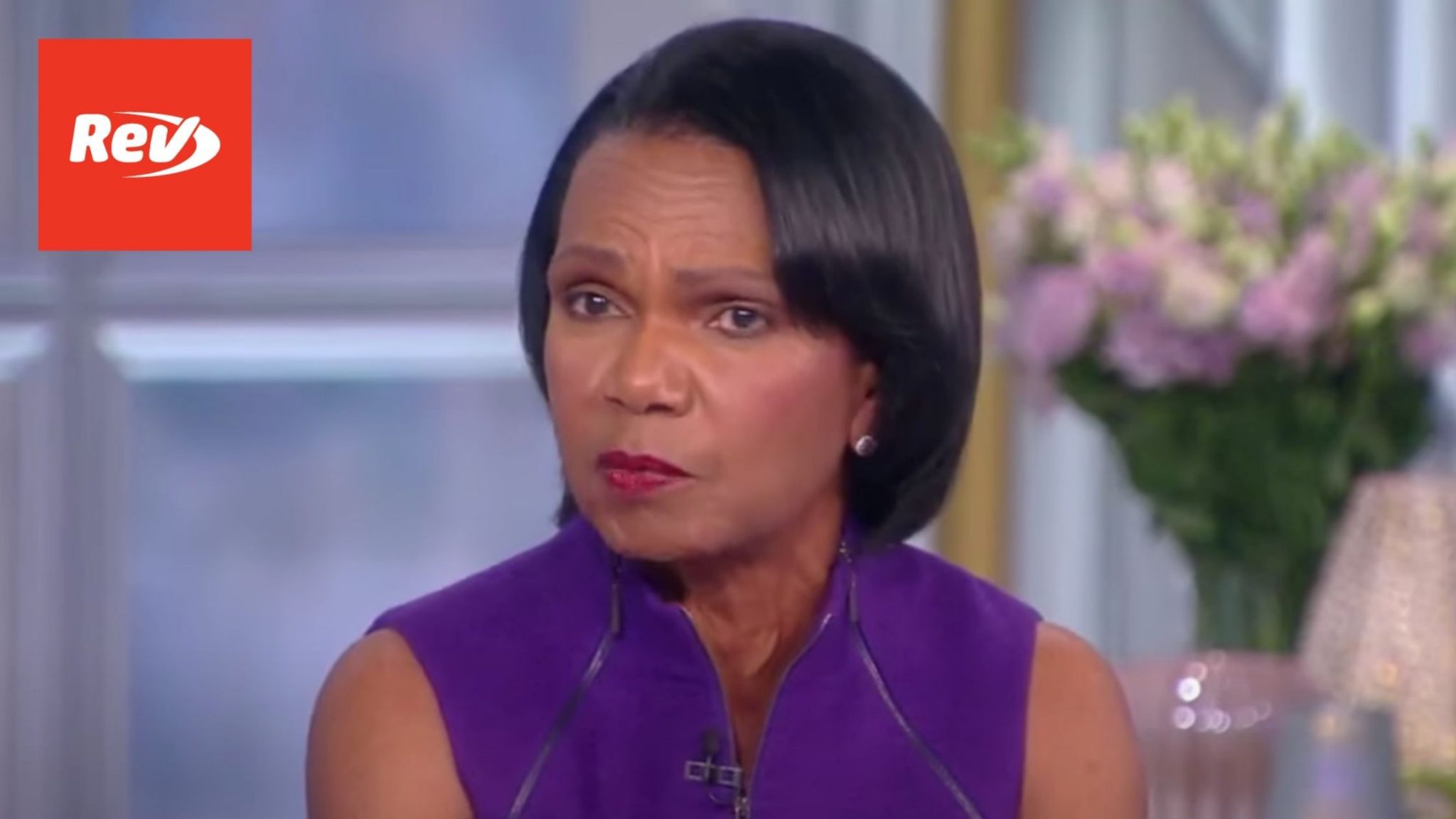 Former Secretary of State Condoleeza Rice discussed Critical Race Theory on The View on October 20, 2021. Read the transcript of her remarks here.

Whoopi Goldberg: (00:00)
So, the tight Governor’s race in blue-leaning Virginia, is being seen as a barometer for which way America will swing in 2022 in the midterms. And one of the key issues up for debate is how much of a voice parents should have in their child’s school curriculum, especially when it comes to subjects like sex education, and Critical Race Theory. I thought they didn’t teach Critical Race Theory until they went like law school or something.

Condoleezza Rice: (00:32)
I sure hope not, because I’m not certain seven year olds need to learn it.

Whoopi Goldberg: (00:35)
It just sounds crazy to me. But the question is, do parents need more influence here, or should they leave the lesson planning to the pros?

Joy Behar: (00:44)
Well, I was a teacher and there is a curriculum that teachers follow, and it’s studied by a supposedly experts. I have a lot of education credits, because you learn how to teach, and you learn your subject. So you can’t really pick that up against a parent who just is annoyed that you’re teaching, To Kill a Mockingbird, or whatever the curriculum says. You can’t have the parents interfering to that extent, in the curriculum, but it’s nice to hear from them, but if they are adamant and they don’t want you to teach what is going to be taught, period. They’re going to have to homeschool their kids, because this is not going to wash.

Condoleezza Rice: (01:23)
Well, they’re actually homeschooling them in increasing numbers. And I think that’s a signal. First of all, parents ought to be involved in their children’s education.

Condoleezza Rice: (01:36)
Their children are in school seven hours, that’s a very formative period. And I think parents ought to have a say. We used to have parent-teacher conferences. We used to have PTA’s. There are lots of ways for parents to be involved, and they should be. But if I could take a moment to talk about the whole issue of Critical Race Theory and what is, and is not being taught, I come out of an academic institution, and this is something that academics debate. What is the role of race and so forth? And let me be very clear; I grew up in segregated, Birmingham, Alabama. I couldn’t go to a movie theater, or to a restaurant with my parents. I went to segregated schools until we moved to Denver. My parents never thought I was going to grow up in a world without prejudice, but they also told me, “That’s somebody else’s problem, not yours. You’re going to overcome it, and you are going to be anything you want to be.” And that’s the message that I think we ought to be sending to kids.

Condoleezza Rice: (02:27)
One of the worries that I have about the way that we’re talking about race is that it either seems so big that somehow white people now have to feel guilty for everything that happened in the past. I don’t think that’s very productive. Or Black people have to feel disempowered by race. I would like Black kids to be completely empowered, to know that they are beautiful in their Blackness, but in order to do that, I don’t have to make white kids feel bad for being white. So somehow, this is a conversation that has gone in the wrong direction.

Condoleezza Rice: (03:03)
Yeah. You know, there’s a little bit of, in order for Black kids who quite frankly, for a long time, the way they were portrayed, the way their history was portrayed, it was second class citizenship.

Condoleezza Rice: (03:14)
But I don’t have to make white children feel bad about being white in order to overcome the fact that Black children were-

Sara Haines: (03:26)
We have a couple of examples here. In Cupertino, California, in an elementary school, third graders are instructed to rank themselves based on their power and their privilege. California’s Department of Education is proposing to eliminate opportunities for accelerated math in the name of equity. In Greenwich, a white bias survey is handed up to seventh grade English class. A New York private school is separating by race, gender, and ethnicity, white identifying group, met with a white consultant who displayed a slide that named supposedly characteristics of white supremacy. An equity statement from the school district of Palm Beach County outlined the initiative dismantling structures rooted in white advantage. It’s happening across the country.

Whoopi Goldberg: (04:08)
But again, if you have a teacher, history is going to be taught.

Whoopi Goldberg: (04:14)
And as we were talking earlier, when you go to Texas, you talk to Mexican kids who feel like crap because they’re being told they’re less than because of the Alamo. The whole idea of teaching history is so we don’t repeat it. So, I think that if you’re a good teacher, you don’t teach to make a white kid feel bad, you’re supposed to say, “Listen, you didn’t do any of this, but you should know what happened.” And make sure, along with Black kids and Native American kids and all the colors that be in school.

Condoleezza Rice: (04:52)
I have no problem with letting people know what happened.

Condoleezza Rice: (05:00)
Human beings aren’t angels now. And they weren’t angels in the past, and so how we teach about our history is also important.

Condoleezza Rice: (05:40)
People are being taught the true history. But I just have to say one more thing; it goes back to how we teach the history.

Condoleezza Rice: (05:47)
We teach the good, and we teach the bad history. But what we don’t do is make seven and 10 year olds feel that they are somehow bad people because of the color of their skin. We’ve been through that, and we don’t need to do that again.

Joy Behar: (06:09)
I mean, in Germany, they teach the Holocaust to every student.

Condoleezza Rice: (06:15)
And we teach slavery to every student.

Joy Behar: (06:17)
And a school trip is a trip to Auschwitz, or Dachau. They learn about their history, and there is not two sides to the story.

Condoleezza Rice: (06:24)
We all have to learn about our history, but we also have to recognize-

Condoleezza Rice: (06:28)
[crosstalk 00:06:28] We all recognize that we have to live together, and we’re going to do better living together.