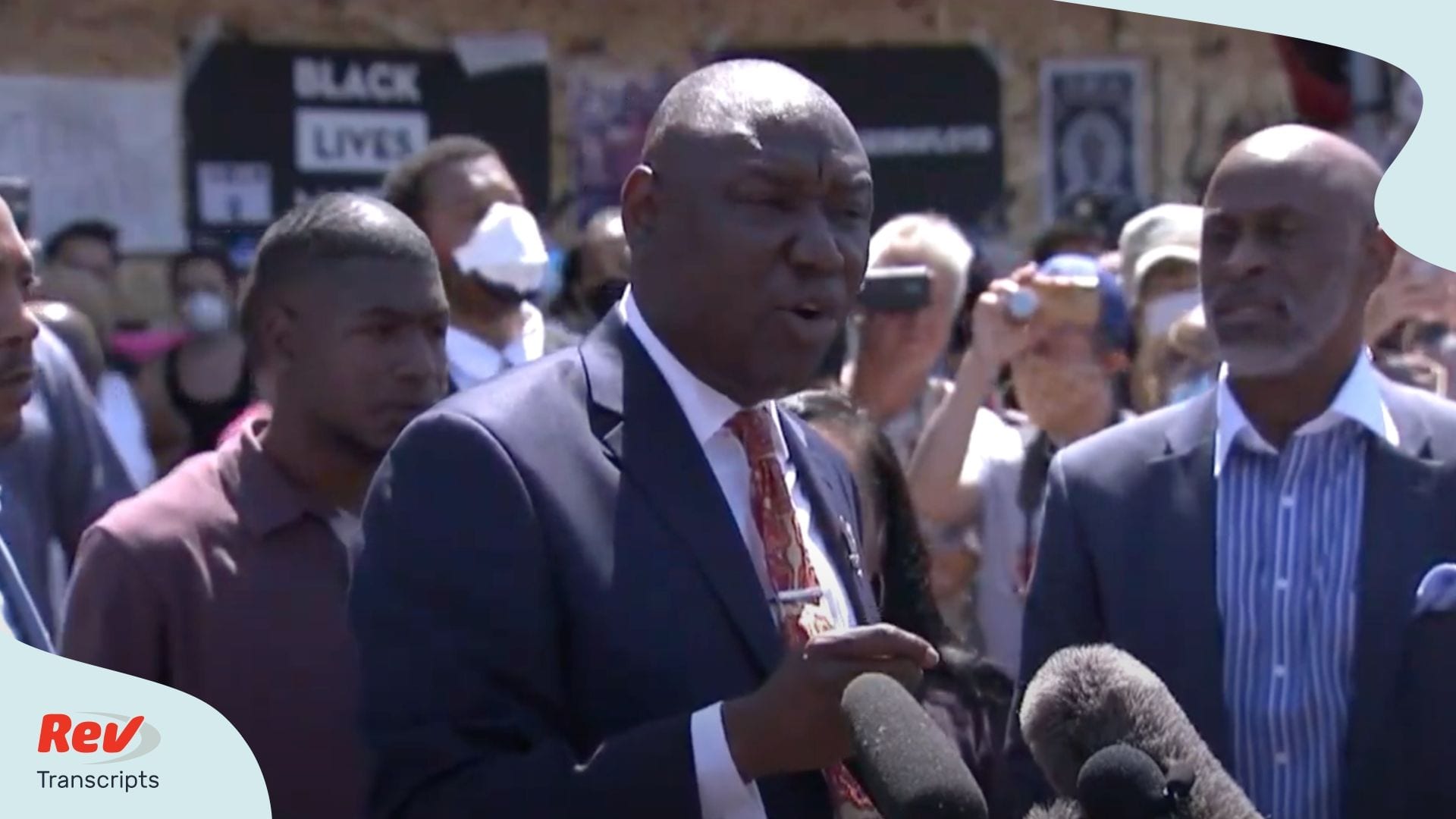 Attorney Ben Crump: (02:15)
I’m attorney Ben Crump, the lead attorney for the family of George Floyd, and recently arriving in Minneapolis is his son, Quincy Mason. He’s going to make a few remarks to you. Understand this is a young man who is broken hearted, and this is very emotional for him. Now, we come here today to this spot, to remember George Floyd who was tortured, who was tortured to death. And so we thank the Minnesota governor bringing human rights charges against the Minneapolis Police Department, because we absolutely believe that he was tortured in the last eight minutes and 46 seconds of his life.

Attorney Ben Crump: (03:17)
Witness Donna Williams yesterday, who was the person in the video saying you all are going to kill him, likened it to suffocation, like a fish out of water gasping for air. The independent autopsy performed by the family concluded that George Floyd was starving for air. He needed a breath. And the ambulance that came here to pick him up from this very spot was the hearse for George Floyd. And so we are demanding justice based on the autopsy findings, but more importantly, what the entire world has seen now with their eyes, that they cannot unsee. The autopsy, the medical reasons cause of death was mechanical affixation based on the knee to his neck and the two knees to his back that was compressing his lungs, not allowing them to circulate air and blood to his brain. He died because he was starving for air. He needed a breadth. And so we are demanding justice. We expect all of the police officers to be arrested before we have the Memorial here in Minneapolis, Minnesota tomorrow. (cheering)

Attorney Ben Crump: (05:10)
Because we cannot have two justice systems in America, one for black America, and one for white America. We must have equal justice for the United States of America. (cheering). And change is going to come in the tragic killing of George Floyd. And I proclaim with his son as my witness that change starts today. (cheering)

Attorney Ben Crump: (05:54)
We are confident that Attorney General Keith Ellison is working feverishly to do the right thing. And what is the right thing? To make sure that George Floyd’s family is afforded justice by holding these officers accountable to the full extent of the law, each and every one of those four officers. (cheering)

Attorney Ben Crump: (06:27)
Attorney General Ellison has a track record as champion civil rights for those who are marginalized, for people like George Floyd because black lives matter. And George Floyd’s life matter too. Quincy is going to make a few remarks. I’ll try to take a few questions and then we’re going to let him go receive the rest of his family at the airport. And then we will keep you updated.

Attorney Ben Crump: (07:00)
We fully expect there to be an announcement with these officers being arrested. And we will give you the family reaction when that happen. But right now I introduced to the world, Mr. Quincy Mason, George Floyd’s son, to say a few remarks on behalf of him and his family. Talk as loud as you can.

Quincy Mason Floyd: (07:25)
Here united with my family, trying to get justice for my father. No man, or woman should be without their fathers. We want justice for what’s going on right now. I appreciate everyone joining us to support and love. Thank y’all for that.

Crowd: (08:01)
Quincy we’ve seen so many protests around the world, including Australia, about what’s happened to your father. A lot of people there are protecting about was happening to indigenous people of color in custody in Australia. Do you have any message to them about what has happened?

Quincy Mason Floyd: (08:17)
I just want to thank them for supporting my family and seeing justice.

Quincy Mason Floyd: (08:33)
We need change. This can’t happen to anybody else.

Crowd: (08:36)
Quincy did you see… Did you learn about the death of your father on TV, like everybody else? Is that the first time you…

Reporter: (09:00)
What charges are you expecting today? What are do you expect the three other officers to be charged with?

Attorney Ben Crump: (09:05)
We are expecting these officers to be charged as accomplices for the killing of George Floyd.

Attorney Ben Crump: (09:16)
And hold on, I’ll make sure everybody is quiet in the situation. He’s not going to say anything. All right.

Attorney Ben Crump: (09:33)
Obviously as the police chief said, these officers are complicit by their silence. But we now know based on the audio from their body cam video, that they also are accomplices because their failure to act when they knew that they did not have a pulse. Remember one officer said, “He doesn’t have a pulse. Maybe we should turn him over on his side.” However, Officer Chauvin and said, “No, we’re going to keep him in that position.” To us, that is intent. And that’s why the family is calling for first degree murder charges against Officer Chauvin for having his knee in his neck. And equally important is the fact that those two knees in his back, for not one minute, not two minutes, not three minutes, not four minutes, not five minutes, not six minutes, not seven minutes, not eight minutes, but almost nine minutes! Eight minutes and 46 seconds George Floyd begged for air. He called out for Quincy’s grandmother. He called out to anybody who would listen. It seemed like the lay people on the street were listening. The people who refused to listen where the people who were supposed to listen. It was supposed to be the police who were meant to protect and serve George Floyd because George Floyd was an American citizen and George Floyd was a human being. George Floyd deserved humanity.

Attorney Ben Crump: (11:34)
And also the system needed to be listening to George Floyd, not just the police, but the prosecutors, the criminal justice system, the judges, the legislators, the president, America needed to be listening when George Floyd said, “I can’t breathe.” Because when he couldn’t breathe, none of us could breathe. And so, this is a tipping point. This is a tipping point. This moment is a tipping point to change America and see if America truly believes in the words of Thomas Jefferson, that we hold these truths to be self evident that all men are created equally, that they’re endowed by their creator with certain inalienable rights, that amongst them are life, liberty, and pursuit of happiness. Well America, that means black people too. (cheering) Does than answer your question, George? Okay.

Attorney Ben Crump: (15:16)
The response of the world has been heartening to this family. Their entire family have been very heartening. They receive it as a blessing that George Floyd’s life mattered to more than just them. It is very important to note who George was. There are videos on social media that George believed in peaceful protests. Brandon Williams, who was George’s nephew, who was like a father to Brandon, said that they talked almost every day and during the Ferguson protest, during the Baltimore protests. And just recently doing the Sacramento protest. You had George Floyd praying for peaceful protest.

Attorney Ben Crump: (16:24)
The forensic scientists, Dr. Michael Boden and Dr. Alicia Wilson, who did the family’s autopsy said that George died because he needed a breath. And so I am employing along with George Floyd [inaudible 00:16:43] for peace. Let’s take a breath for justice. Let’s take a breath to heal our country.