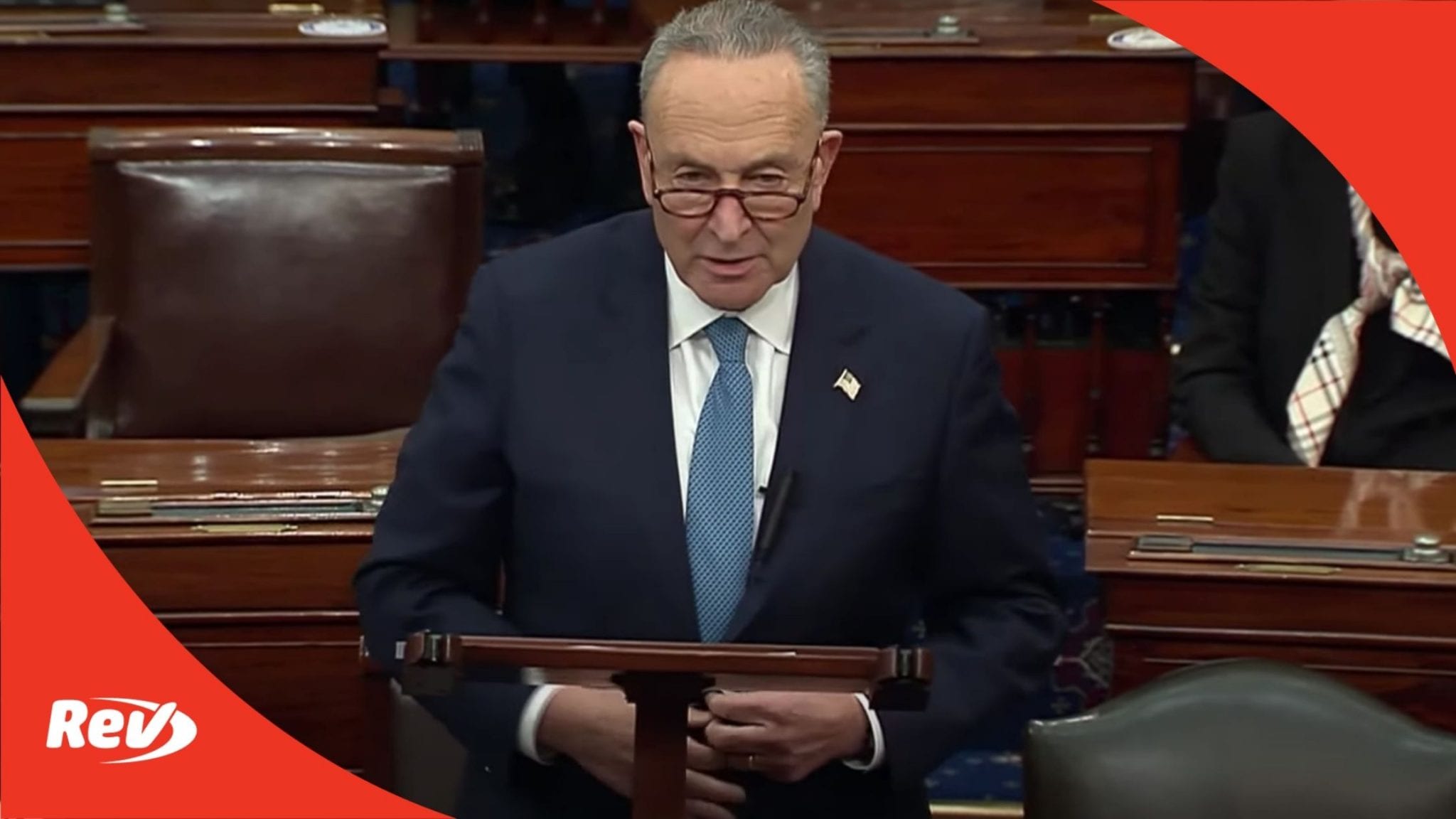 Senator Chuck Schumer gave a Senate floor speech on the election certification on January 6. He called the event a “formality” and said “the Congress does not determine the outcome of elections, the people do.” Read the transcript of his speech remarks here.

Chuck Schumer: (00:13)
Mr. President, Vice President. As prescribed by the constitution and the laws of the nation, the purpose of this joint session is for tellers appointed on a bipartisan basis by the two houses to read to the Congress the results of an election that has already happened. We are here to receive an announcement of a vote that has already been certified by every state in the union and confirmed by the courts many times, many times, over.

Chuck Schumer: (00:49)
We are here to watch the current vice president open envelopes and receive the news of the verdict that has already been rendered. It is a solemn and august occasion, no doubt, but it is a formality. The Congress does not determine the outcome of elections, the people do. The Congress is not endowed with the power to administer elections, our states are given that power. By the end of the proceedings today, it will be confirmed once again, something that is well-known and well settled, the American people elected Joe Biden and Kamala Harris to be the next President and Vice President of the United States.

Chuck Schumer: (01:40)
Yet a number of our colleagues have organized an effort to undermine and object to that free and fair election. They are in the minority, they will lose, they know that. They have no evidence of widespread voter fraud on which to base their objections. That’s because there is none. There is none. Not brought before any of the courts successfully. They know that President Trump and his allies have suffered a defeat in court after court, across the country. Losing no fewer than 62 legal challenges. And I might add many Republican appointed judges, some appointed by President Trump rendered those decisions.

Chuck Schumer: (02:34)
They know, you all know, that Joe Biden and Kamala Harris are going to be sworn in as President and Vice President of the United States on January 20th. But they are going to object to the counting of the vote anyway, and in the process, they will embarrass themselves, they will embarrass their party and worst of all, they will embarrass their country. This insurrection was fortunately discouraged by the leadership of the majority party, but it was not quelled. It is a very sad comment on our times that merely accepting the results of an election is considered an act of political courage. Sadder, and more dangerous still is the fact that an element of the Republican party believes their political viability hinges on the endorsement of an attempted coup. That anyone, much less than an elected official would be willing to tarnish our democracy in order to burnish their personal political fortunes.

Chuck Schumer: (04:00)
Over the course of the afternoon and however far into the evening this band of Republican objectors wants to take us senators of goodwill from both sides of the aisle will explain why these challenges must be dismissed. The senators from states whose electoral votes are being challenged will explain how the allegations of fraud are baseless. And a substantial bi-partisan majority must vote to put down these objections and defend the sanctity of our elections and indeed our great and grand democracy. Because that’s what we’re talking about today, the health of our democracy, this wonderful, beautiful, grand democracy, where the peaceful passing of the torch is extolled by school children the second grade, but not by some here.

Chuck Schumer: (05:10)
As we speak, half of our voters are being conditioned by the outgoing president to believe that when his party loses an election, the results must not be legitimate. As we speak, the eyes of the world are on this chamber questioning whether America is still the shining example of democracy, the shining city on the hill. What message will we send today to our people, to the world that has so looked up to us for centuries? What message will we send to fledgling democracies who study our constitution, mirror our laws and traditions in the hopes that they too can build a country ruled by the consent of the governed? What message will we send to those countries where democratic values are under assault and look to us to see if those values are still worth fighting for? What message will we send to every dark corner of the world where human rights are betrayed, elections are stolen, human dignity denied? What will we show those people? Will we show those people that there is a better way to ensure Liberty and opportunity of humankind?

Chuck Schumer: (06:44)
Sadly, a small band of Republican objectors may darken the view of our democracy today, but a larger group of senators and house members from both sides of the aisle, can send a message too. That democracy beats deep in the hearts of our citizens and our elected representatives, that we are a country of laws and of not men, that our traditions are not so easily discarded even by our president, that facts matter, that truth matters. That will democracy allows free speech and free expression even if that expression is anti-democratic, there will always, always be, praise God, a far broader and stronger coalition ready to push back and defend everything we hold dear. We can send that message today by voting in large and overwhelming numbers to defeat these objections.

Chuck Schumer: (07:49)
My colleagues, we each sworn an oath just three days ago that we would defend and support the Constitution of the United States against all enemies, foreign and domestic, that we would bear true faith and allegiance to the same. We swore that we took this obligation freely without any mental reservation or purpose of evasion. And that we could well, and faithfully discharge the duties of the office we were about to enter, so help us God.

Chuck Schumer: (08:29)
The precise words of that oath were shortly written after the civil war, when the idea of true faith and allegiance to this country and its constitution took on enormous meaning. Let those words, let those words, ring in the years of every Senator today. Let us do our duty to support and defend the constitution of the United States, so help us God.