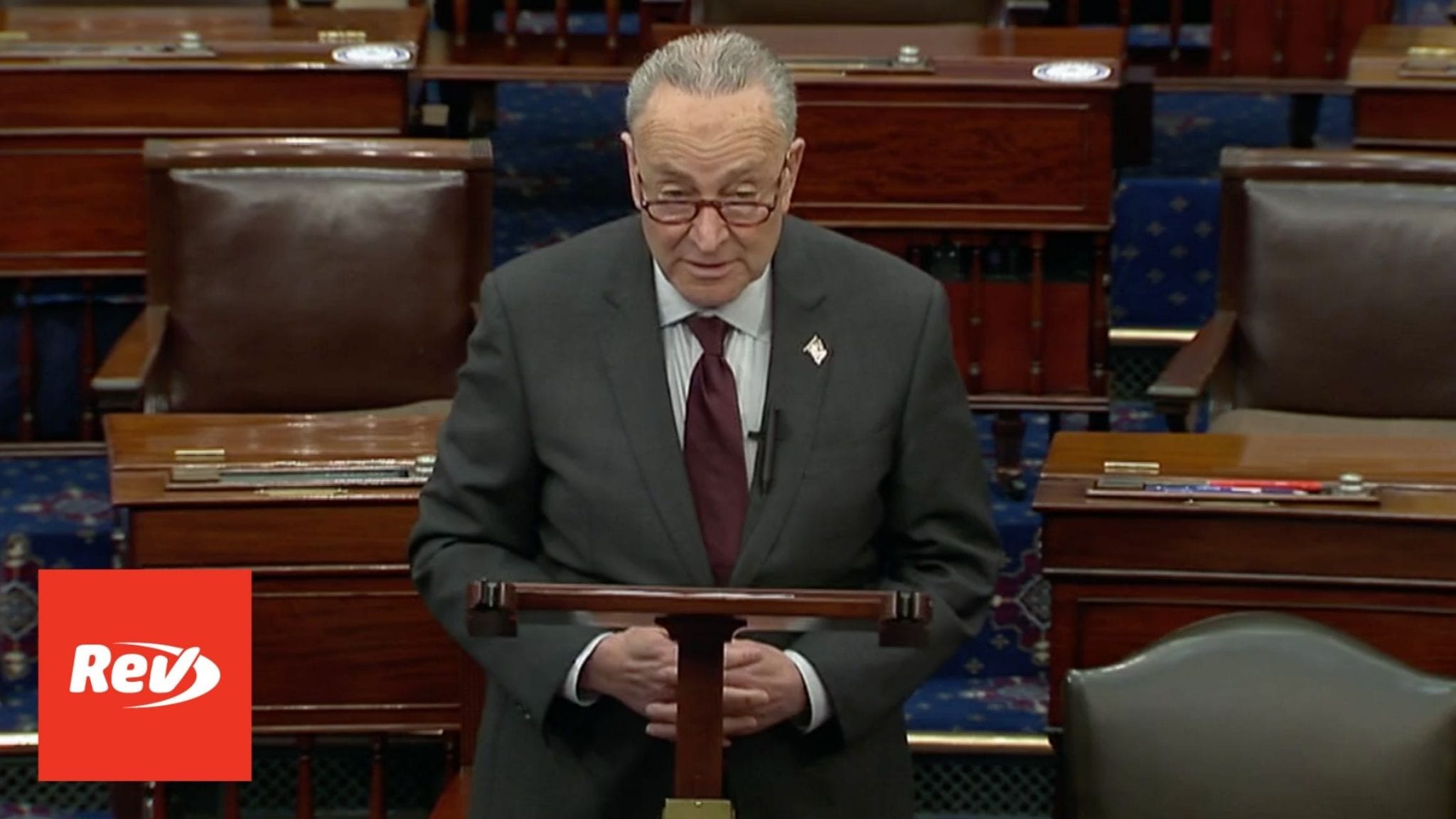 Senate Majority Leader Chuck Schumer gave a speech on the Senate floor on March 23, 2021 to discuss the mass shooting in Boulder and gun violence. Read the transcript of his full speech remarks here.

Chuck Schumer : (00:21)
Thank you, Mr. President. Now, this morning, the nation grieves with the people of Boulder, Colorado, the site of another horrific mass shooting last night. A depraved gunman opened fire inside a local supermarket, killing 10 people, including a police officer. Many more are injured. Our hearts go out to the people of Boulder and the families of those Americans who have lost their lives so unexpectedly. Our thanks, again go out to the brave first responders. People kiss someone goodbye for the morning, send somebody off to school, and then they’re never seen again, never seen again.

Chuck Schumer : (01:05)
It’s just awful. And it’s been less than eight weeks, Mr. President, since eight people were killed in another series of shootings in Georgia. We cannot seem to finish grieving one tragedy before another takes place. It’s a reminder that we must confront a devastating truth in the United States, an unrelenting epidemic of gun violence steals innocent lives with alarming regularity. Even amidst the pandemic, gun violence has not receded. In fact, confoundingly, it has grown even worse. 2020 was one of the deadliest years for gun violence in two decades, a reminder that most gun violence doesn’t even make headlines, but nonetheless causes immeasurable devastation to communities from one end of our country to the other. So we have a lot of work to do. I’ve already committed to bringing universal background checks legislation to the floor of the Senate. There’s a hearing today in the Senate Judiciary Committee under Chairman Durbin’s leadership to examine several common sense proposals to reduce gun violence.

Chuck Schumer : (02:16)
Two summers ago, the Republican leader, then the majority leader, promised there would be a debate in the Senate on gun violence, but it never happened. It never happened. This Senate will be different. The Senate is going to debate and address the epidemic of gun violence in this country. Today, our hearts are with the people of Colorado and with everyone whose lives have been touched by gun violence. Now, as I mentioned, Mr. President, the shooting in Colorado comes only a week after another tragedy in the communities outside Atlanta, Georgia, where eight people were killed in a string of shootings. Six of whom were women of Asian descent. It’s important to place the Atlanta area shootings in context. Over the past year, there has been a rising tide of violence against Asian-Americans, driven by fear, misinformation, and age old prejudices against the Asian-American community from shouted insults and racial slurs to outright assault.

Chuck Schumer : (03:24)
A 61-year-old Filipino American was slashed in the face by a box cutter on the New York Subway. An 84-year-old Thai American in San Francisco was shoved so violently it led to his death. And now, this attack on Georgia. Every day Asian-Americans walk down the streets, looking over their shoulders, wondering if they’ll be insulted, assaulted, or even worse, even worse. The poison of racism has always existed in America, but over the past four years, it seems to have found new life. There is no question that the former president, Donald Trump through word and deed fanned the flame of racial bias in our country. It’s not a coincidence that it’s worse now than it’s been before. Donald Trump fanned those flames, fanned those flames often with glee. With respect to the Asian-American community specifically, the former President encouraged rhetoric that blamed the Chinese people for the Coronavirus, an absolutely despicable notion that has led to all sorts of verbal and physical assaults on Asian-Americans.

Chuck Schumer : (04:43)
You can see him with his chin strutted up when he called it the virus, but he named it, you know what, the China virus. So despicable. And he did it with almost a joy. Here in America, we all know that an attack against any one group is an attack against all of us. So it’s up to all of us now to stand up and speak out and support the Asian-American community in America. Over the weekend, I joined several vigils to stand with Americans of all ages, races, and faiths to support the Asian-American community. There was a large turnout. And our Asian brothers and sisters were so relieved that so many of us from the elected community were there. We should all be doing that in every part of the country.

Chuck Schumer : (05:42)
And here on the floor of the Senate this morning, I started the process to make two pieces of legislation available for action by the full set. First, the bill led by my friend, Senator Hirono of Hawaii, very similar to the same is a bill introduced by our New York Congress member, Grace Meng of Queens. And this legislation by Senator Hirono will address COVID-related hate crimes against Asian-Americans head on. It would assign a point person at the Department of Justice to expedite the review of COVID-19 related hate crimes, provide support for state and local enforcement agencies to respond to hate crimes, and work on solutions to the problem of racially discriminatory language that’s been used to describe the pandemic. And second, a bill led by my friend, Senator Durbin, to counter the threat of domestic terrorism and violent white supremacy. This is a bill that passed the House of Representatives last year on an overwhelmingly bipartisan basis.

Chuck Schumer : (06:47)
As far as legislation goes, it’s as much a no-brainer as it comes. Every one of us, every one of us has an obligation to speak out against these hate crimes. One of the best antidotes, there are many, but one of the best antidotes when hate occurs is to answer it forcefully, strongly, and repeatedly, so that no one thinks it’s acceptable and those who perpetrated are shunned. And then if they’ve broken the law, punished. Every one of us must do this, we must speak out. And here in the Senate, we have more than a responsibility to just speak out, we must take action. And I hope we will have universal support for these pieces of legislation that I mentioned. I Yield the floor and note the absence of a quorum.