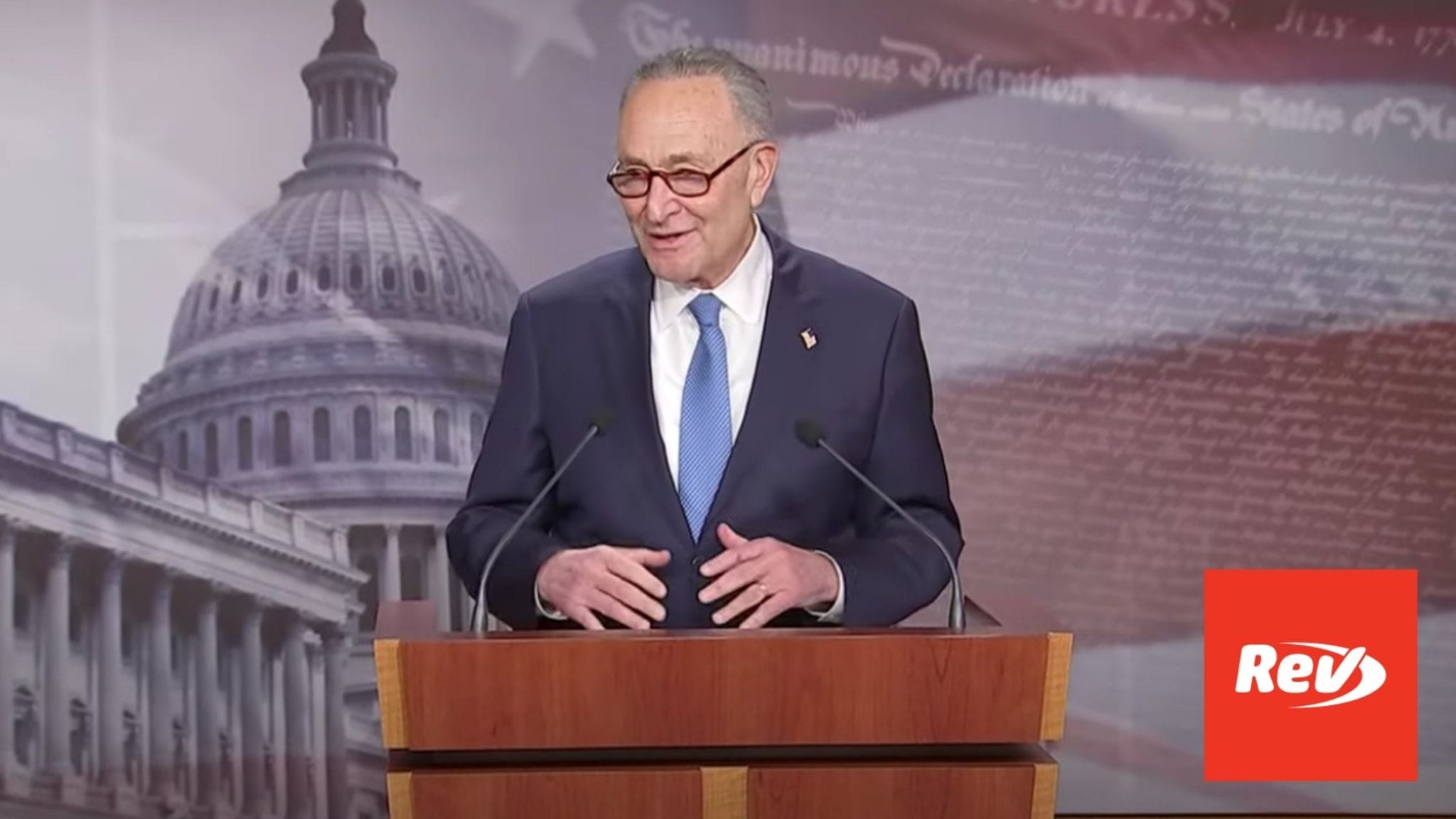 Senate Democrat Leader Chuck Schumer held a press conference on January 6 ahead of the election certification. He addressed the Georgia Senate runoff election results and declared a Democratic majority in the Senate. Read the transcript of his remarks here.

Chuck Schumer: (00:08)
I doubt that. Okay, good morning, everyone, and what a good morning it is. We sure did not take the direct path to get here, but here we are. You want me to shut it off? It’s a cell phone.

Chuck Schumer: (00:29)
So as I said, we sure didn’t take the most direct path to be here, but we are now here, here we are. And it feels like a brand-new day. For the first time in six years, Democrats will operate a majority in the United States Senate, and that will be very good for the American people. America is experiencing one of the greatest crises we have ever had in our history, and the Senate Democratic majority is committed to delivering the bold change and help that Americans need and demand. Senate Democrats know America is hurting; help is on the way.

Chuck Schumer: (01:12)
And we have two new senators coming to help. One of the first things that I want to do when our new senators are seated is deliver the $2,000 checks to the American families. Senators Raphael Warnock and Jon Ossoff ran first-rate campaigns, they will be outstanding senators for Georgia. When Raphael Warnock was born, both of Georgia’s senators were segregationists. Yesterday, Georgia just elected its first African-American to the United States Senate in its history. And Jon Ossoff has been on the ground, working it for years. He was never daunted, persistent, never gave up. I’m so proud of both their campaigns, and so excited to welcome them to the United States Senate. Couldn’t come at a better moment.

Chuck Schumer: (02:10)
I also want to especially thank Senator Catherine Cortez Masto, our amazing chair of the DSCC, and all of the great staff who worked at the DSCC. And a shout-out to two members of the DSCC who, right after Election Day, went down to Georgia, spent their Christmas and New Year’s holidays there, and that is Christie Roberts and Laura Passalacqua, our communications director and our political director. And a great shout-out to my dear friend for over a decade, Stacey Abrams, and her whole team at Fair Fight Georgia. For 10 years, she and her team and so many of the women’s groups, Black women’s groups, worked and worked and worked to change Georgia. Stacey would be the first to tell you she didn’t do it alone. So a huge thank you to the many organizations who have been working so hard for so many years just to get this moment.

Chuck Schumer: (03:11)
And of course, none of this would be possible without the hundreds of thousands of organizers and volunteers who put their time, sweat and determination into this victory. Organizing during a pandemic is not easy, but you all found a way and we say thank you.

Chuck Schumer: (03:30)
Now, I’ve already spoken to President Biden this morning, and I pledged to him that, as majority leader, President Biden and Vice-President Elect Harris will have a partner in me and my caucus, who is ready, willing and able to help achieve a forward-looking agenda and deliver bold change to the American people. For too long, much-needed help has been stalled or diluted by a Republican-led Senate and President Trump. That will change with a Democratic Senate, a Democratic House, and a Democratic president.

Chuck Schumer: (04:09)
One of the things I’m most excited about is that we have had so much talent in our Democratic caucus, and all that talent has been bottled up. They haven’t really been allowed to participate and put legislation on the floor. Now that is all going to be, all that talent that’s been bottled up for so long, will be unleashed, and you’ll see amazing things coming out of our new chairs and sub-committee chairs. They’ll be able to showcase their talents and accomplish great things. It excites me.

Chuck Schumer: (04:45)
And as a caucus, we will work every single day to reward the faith that the American people have placed in us. Thank you. I’m not going to take many questions because today’s a very busy day, and you’ll hear more from me on the floor later today, as well over the coming days and months and weeks and years. But I’ll take a question or two. Yes.

Speaker 3: (05:08)
Leader Schumer, two quick questions: first, have you talked to Leader McConnell yet, and secondly, do you have the president to thank for the wins in Georgia last night?

Chuck Schumer: (05:18)
Look, there’s tremendous thanks to go around … President Trump, you mean.

Chuck Schumer: (05:22)
I see. Look, I mean, the number-one credit I give to winning is our two candidates and their campaigns and the issues the campaigned on. They wanted to help the American people. President Trump, the Republican senators, kept playing games. People want help. They want bold action. I think they realize that the two Democratic Senators in Georgia would join a Democratic caucus that wanted to do it.

Chuck Schumer: (06:03)
I’m not going to get into either prioritizing or details. I said what I said about the checks, it’s one of the first things we want to do once our new senators are seated. They campaigned on it.

Speaker 5: (06:15)
Leader Schumer, last time there was a 50-50 Senate there was a power-sharing agreement between Senators Daschle and Lott. Do you foreshadow that happening with you with Senator McConnell?

Chuck Schumer: (06:25)
Well, look, I look forward to sitting down with Leader McConnell. We have a lot of things to discuss, we first have to wait till the races are certified and the new senators are here and Vice-President Kamala is in the chair before we can put anything in place. But certainly we’ll have to talk. [crosstalk 00:06:42]

Speaker 7: (06:45)
Follow-up on two questions: have you spoken with Leader McConnell yet-

Chuck Schumer: (06:56)
As I told you, it’s one of the first things we want to do. Our Georgia senators campaigned on it, our caucus is strongly for it, we think the American people need it.

Chuck Schumer: (07:11)
Look, obviously with Democratic control, the ability of Joe Biden to move nominations forward will be easier. The calendar, I haven’t begun to look at yet. Last one.

Speaker 9: (07:24)
Leader Schumer, could you just expound a little bit about the moment when you found out that you would be the majority leader, and then just second, verily, progressives are really still pushing you to nuke the legislative filibuster. Can you make that promise right now?

Chuck Schumer: (07:38)
Look, what we’re going to do, we know, we Senate Democrats know we face one of the greatest crises Americans have, we’re united in wanting big, bold change. And we’re going to sit down as a caucus and discuss the best ways to get that done. And the first question?

Chuck Schumer: (07:57)
Yeah. I was sitting at home in Brooklyn, watching my television, and at about midnight, having talked to Ossoff about three or four times and Warnock several times, I realized that even though he was behind then by about a couple of thousand votes, that all the votes that were coming in were going to be Democratic votes, and the odds were very, very high that he would win. And wow, who would’ve thought? As I said, this is not the path we chose to get here, but we’re here.