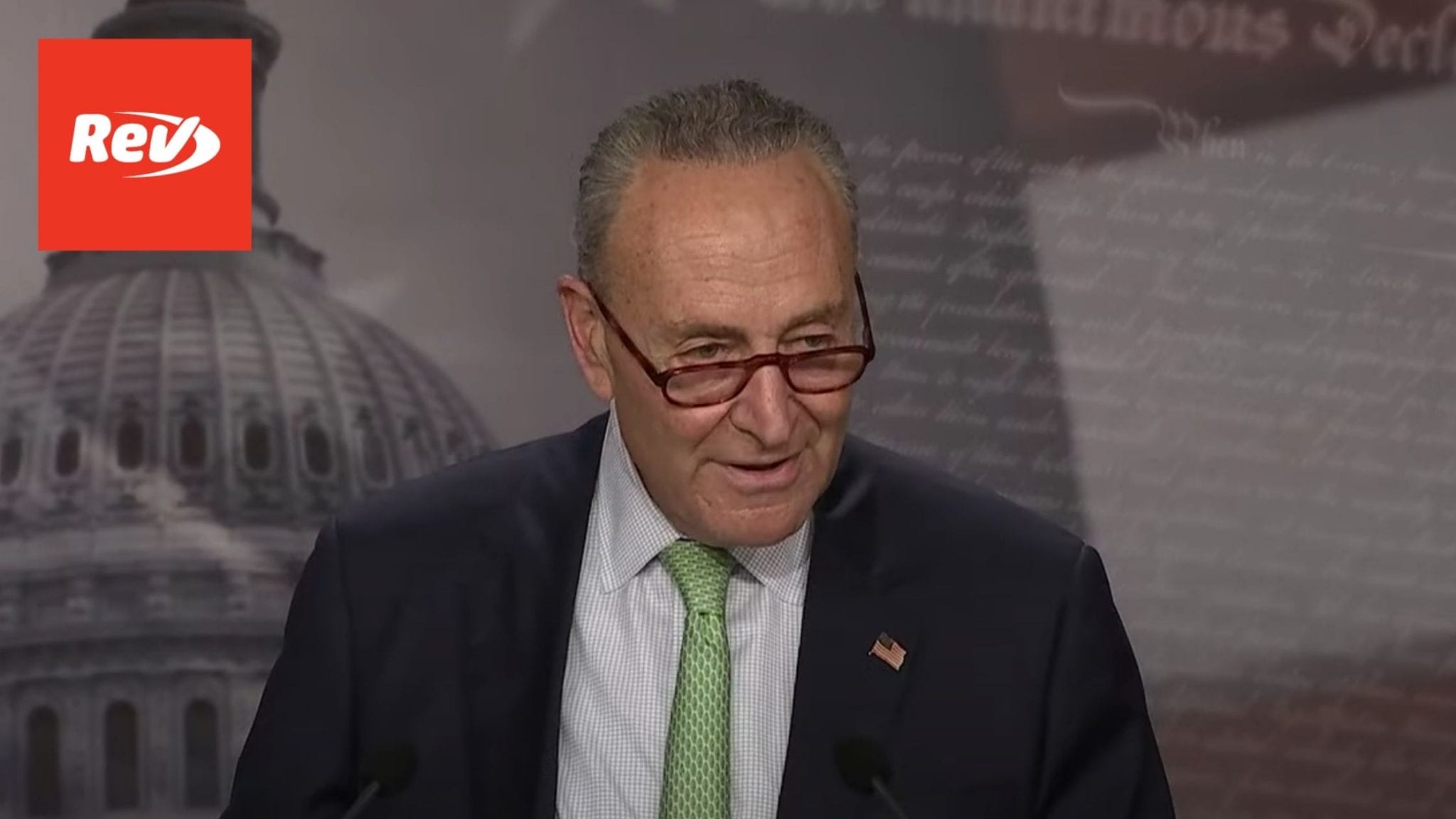 Senate Minority Leader Chuck Schumer held a press conference on October 1. He discussed a proposed bill intended to protect Americans’ healthcare access and concerns about the Affordable Care Act being repealed under a conservative Supreme Court. Read the transcript of the briefing here.

Chuck Schumer: (00:03)
Hello everybody. Well, today we saw the big difference between Senate Democrats and Senate Republicans. Senate Democrats want to protect American people’s healthcare. They want to make sure, we want to make sure, that 130 million Americans who have pre-existing conditions, including those who have contracted COVID, can get protection from rapacious insurance companies that might want to rip their healthcare away from them. Republicans were willing to say, “The heck with you, American people. The heck with you. We’re siding with the big special interests, and we’re not going to protect you.” Republicans had a golden opportunity today, the Republican Senate Leader McConnell, to make sure that the administration didn’t pursue this suit that would take away Americans’ healthcare. And of course they sided with the big special interests and refused. The American people will hear this loud and clear. This is a stark division between the parties. They didn’t want to vote on this.

Chuck Schumer: (01:16)
I had to actually go to the floor when no Republican was on the floor and ask to put this bill in play, and they feared it. They tried to jump through a pretzel last night because they’re so afraid of this bill. That didn’t work, and now they’re trying today to say that this doesn’t matter. Well, yes it does. And I’d say one final thing. This is a one-two view, or rather this is a one-two punch to the American people. First, vote against our motion to protect Americans’ healthcare. Second, vote for Judge Amy Coney Barrett, who wants to take away your healthcare. Every, every, every action of the Republicans shows, shows what side they’re on and the American people will see it loud and clear. Ready for your questions.

Audience: (02:19)
Senator, so obviously you’ve been trying to make a point here against… And put vulnerable Republicans-

Chuck Schumer: (02:25)
No, I’m trying to put the Republican Party in the Senate. Don’t put words in my mouth. Sorry.

Audience: (02:38)
And that would give them a lot of political cover to say they support pre-existing conditions. Was this a mistake? This-

Chuck Schumer: (02:46)
Let me just say, we knew that some of them would squirm, but when you flip your vote a few weeks before the election, the American people see right through it. These senators are worse off today no matter how they voted, because they flip-flopped. They were against protecting pre-existing conditions. They were for the lawsuit, and now three weeks before the election, they try to say they’re for it and working it out. So there’s not enough votes to actually have it have effect. They can’t hide from all their votes to repeal the ACA, and this new vote only shows their hypocrisy a few weeks before the election. And let me say this, the American people will also see any Senator who votes for Judge Amy Coney Barrett. They will see the hypocrisy of those who said, “This vote shows I’m for protecting Americans’ healthcare,” and then they vote for a judge who is intent on ripping it apart. We believe this will hurt them badly, because their position is clear. It never works to flip your position a few weeks before the election when you’re forced to. Yes.

Audience: (04:03)
I talked to Senator McConnell this morning. He said, quote, “Pre-existing conditions are not in jeopardy before the Supreme Court.” He added, “That is a completely bogus issue.” He says also, “It’s extremely unlikely that the Supreme Court will even deal with that part of Obamacare law.” I wanted to get your reaction to that.

Audience: (04:52)
Might there be an opportunity to offer amendments? And if so, what kind? If there’s a stimulus that comes to the Senate floor in order to slow down the confirmation process or add goals or do something that-

Chuck Schumer: (05:04)
As I said, we’re going to use every tool in the toolbox to try and slow things down because we think rushing through this nomination while the election is already ongoing is so, so very wrong. The problem of course is McConnell, under his defiling the Senate, has limited the number of tools that are in that toolbox.

Audience: (05:27)
Senator, are you worried? It sounds like the more you try to employ your tools moving forward, they’re going to… If you’re going to try to keep the Senate here, they’re going to put more red conservative judges before you, district judges. Is that just the price you’ll pay?

Chuck Schumer: (05:43)
Look, we have to keep the Senate here because there were two issues before us that are of vital importance. One is COVID, where the negotiation’s ongoing in the House right now, and the second is the Supreme Court nomination. And we want to be here to do what we can to oppose it. They would approve those seven judges in lame duck session anyway.

Audience: (06:04)
And then also, have you seen them the latest Mnuchin counteroffer? Where do things stand-

Chuck Schumer: (06:10)
I haven’t seen it. I spoke to Speaker Pelosi a few minutes ago, and they’re not at an agreement yet. They have a lot of issues of disagreement. Yes.

Audience: (06:19)
On that issue, do you think that there is the possibility that there will be some sort of agreement between Pelosi and Mnuchin? And are you going to join those conversations at some point?

Chuck Schumer: (06:31)
Yeah. Just as when it started in the Senate, it was Mnuchin and I sitting in the office, but Nancy and I constantly talk. The same thing is happening now. We talk four or five times a day. And look, we want an agreement, but it’s got to meet the needs of the American people. And there were a lot of places right now where the offer by Secretary Mnuchin doesn’t do that.

Audience: (06:57)
Do I get another? Great. Are there any kinds of… I know you said your tools are limited, but are there any kinds of messaging amendments that you could use at least to be able to tell voters, “Here’s what’s at stake, and here’s what we’re trying to get across?”

Chuck Schumer: (07:08)
Look what happened today. I mean, it’s a serious amendment, but it sure sends a message from one end of America to the other, that McConnell and the Republican Senate leadership is against protecting Americans’ health care. We’re going to look for lots of tools. Stay tuned.

Audience: (07:25)
Can you really say that though, when six Republicans voted for you? It sounds like your bill had bipartisan support.

Chuck Schumer: (07:28)
Look, again. You flip-flop three weeks before the election, the American people have seen through that time and time again. They don’t trust the vote three weeks before the election when the candidates have been under assault on this issue. And we are confident the Republicans, no matter which way they voted… Because on the one side is Trump and the Trump supporters, and then the other side are so many of the American people. No matter which way they voted, they showed their hypocrisy and their distance from the American people. We’re confident of that. Thank you every… Okay, last one.

Audience: (08:02)
From Barrett’s nomination, what will that mean for women’s reproductive rights? And what do you make of GOP accusations saying Dems are attacking Barrett over her faith?

Chuck Schumer: (08:09)
No Dem has attacked Barrett over her faith. It’s a diversion because they don’t want to address the issues, including healthcare and including Roe v. Wade. I think Roe v. Wade, if Judge Barrett got on the court, could either be eliminated or at the very minimum, horrible minimum, so greatly constricted that you’d never recognize it. Thank you everybody.