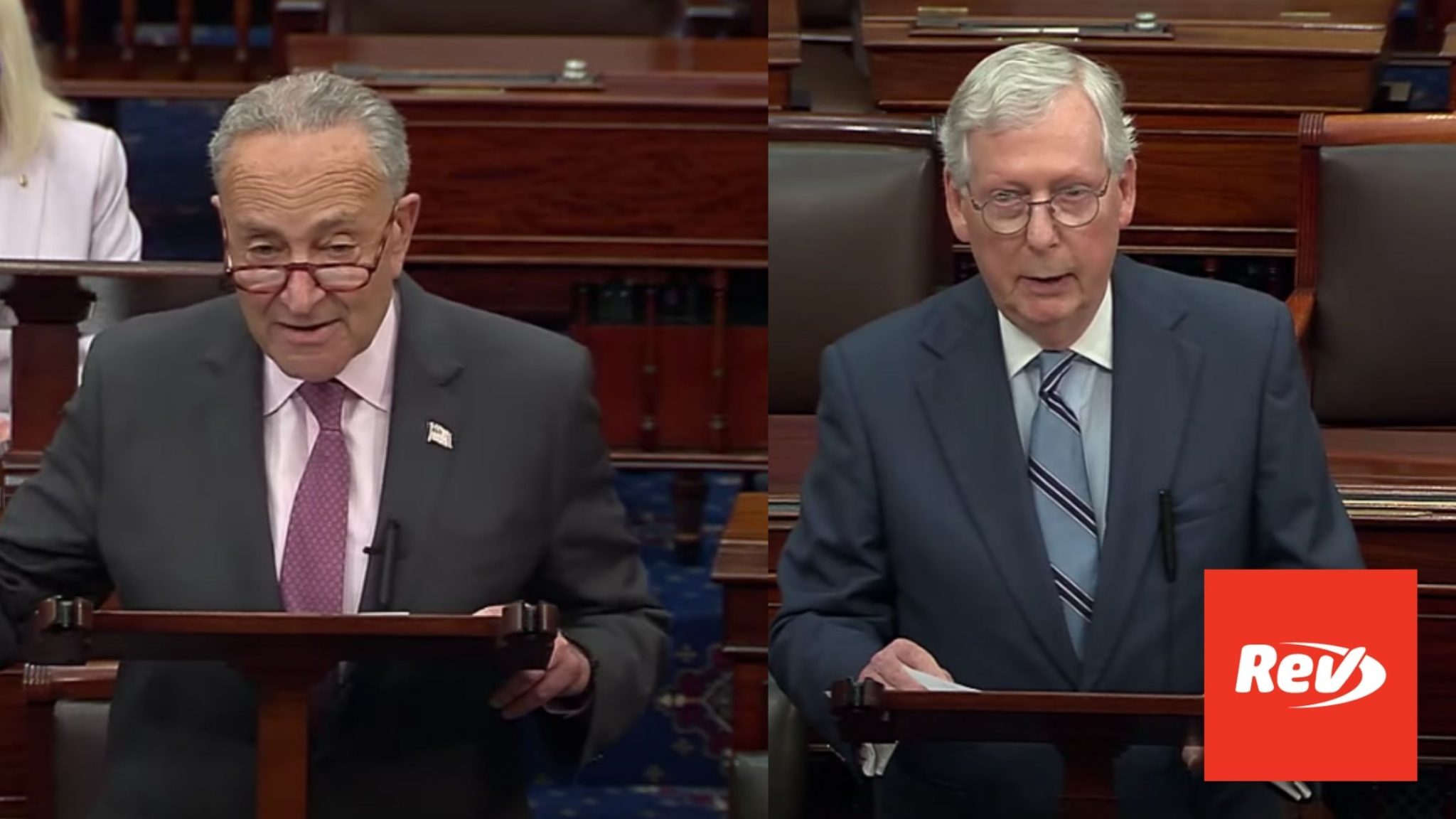 Senate leaders Chuck Schumer and Mitch McConnell spoke about raising the debt limit on the Senate floor on September 28, 2021. Read the transcript of their remarks here.

Senator Chuck Schumer: (00:05)
Well, Mr. President, last night, Senate Republicans voted unanimously to make a default and a shutdown far more likely. And in doing so, solidified themselves as the party of default, the party that says America does not pay its debts.

Senator Chuck Schumer: (00:22)
Now, despite yesterday’s stunning display of obstruction, the fact remains that we need to raise the debt ceiling. And in a few moments, I will offer a way forward for us to avoid causing unnecessary and catastrophic default on the debt.

Senator Chuck Schumer: (01:01)
Now, the Senate was able to raise the debt ceiling at that time because the then Republican majority leader made a consent request to this body that cleared the way for the Senate to increase the debt limit by a majority threshold, instead of requiring 60 votes to break a filibuster. The minority party, under this agreement, was able to vote, no, which is what they claim they want to do. And the majority party was able to approve a debt limit extension and prevent a catastrophe. So we are proposing the same thing today. The same thing the leader cited and said the situation is exactly the same, simply allow for a simple majority threshold to raise the debt ceiling and avoid this needless catastrophe that Republicans have steered us toward.

Senator Chuck Schumer: (01:58)
We are simply asking Senator McConnell to live by his example. We have given the Republicans what they want and now the ball is in their court. Let’s see if Republicans truly want what they say they want. We’re not asking them to vote yes. If Republicans want to vote to not pay the debts they helped incur, they can all vote no. We’re just asking Republicans, get out of the way. Get out of the way when you are risking the full faith in credit of the United States to play a nasty political gain. We can bring this to a resolution today. Using the drawn out and convoluted reconciliation process is far too risky, far too risky. Too many American families are at stake. Far better for us to solve this problem right here and right now.

Senator Chuck Schumer: (03:08)
And so Mr. President, as if in legislative session, I ask unanimous consent that a time to be determined by the majority leader, following consultation with the Republican leader, the Senate proceed to the consideration of S. 28-68, a bill to suspend the debt limit, which was introduced earlier today. That there’d be two hours for debate equally divided and controlled between the two leaders or their designees. That upon the use or yielding back of time, the bill be considered read a third time and the Senate vote on the passage of the bill with no intervening action or debate.

Senator Mitch McConnell: (03:51)
Mr. President, my colleagues wants to discuss precedents from a decade ago, but he and his colleagues have spent all year boasting that what Democrats are doing to the country and the economy is completely without precedent. I agree, what they’re trying to do is completely without precedent. There’s nothing normal, nothing normal about Democrats use reconciliation multiple times to blow a $5.5 trillion hole in the deficit without a single vote from our side. That limit increases like the one we saw in 2006 were not, I repeat, not precursors to a massive blowout reconciliation package that Republicans were just waiting, waiting to shove down Democrats’ throats.

Senator Mitch McConnell: (04:48)
My colleague is trying hard to make this complicated. It’s actually simple. I’ve said for more than two months that we will not help this unified democratic government raise the debt ceiling. Democrats will not get bipartisan help borrowing money so they can immediately blow historic sums on a partisan taxing and spending spree. Democrat leader knew this request would fail.

Senator Mitch McConnell: (05:20)
There is no chance, no chance the Republican conference will go out of our way to help Democrats conserve their time and energy so they can resume ramming through partisan socialism as fast as possible. This democratic government has spent much boasting about the radical transformation they’re ramming through. They’re proud of it. They have no standing whatsoever to ask 50 Republican senators to make the process more convenient. When the democratic leader was recently in the minority, he made us file cloture on matters that weren’t one 10th this controversial. We had to invoke cloture on nominees who went on to be confirmed with literally zero votes in opposition. But now the democratic leader wants us to skip that step on something this controversial, this controversial? Of course, that’s not going to happen.

Senator Mitch McConnell: (06:27)
All year long, Democrats have wanted to control government spending all on their own. They wanted to be in the position they’re in right now. They requested from the parliamentarian and want extra flexibility to redo reconciliation. So if Democrats want to use fast track party line processes to spend trillions of dollars and transform the country, they’ll have to use the same tool to raise the debt ceiling.

Senator Mitch McConnell: (07:01)
Now, here’s what Republicans will do. For the sake of the full faith and credit of our country, I’m about to propose a different consent, one that will allow Democrats to start the budget process they will need to use to raise the debt ceiling. Our democratic colleagues will need to do this alone, but I’ll propose an agreement to ensure the process can begin as soon as Democrats accept that this is the path they need to take.

Senator Mitch McConnell: (07:37)
Therefore, Mr. President, I ask the Senate to modify the request that has been made by the majority leader so that in lieu of this proposal, if the budget committee reports out a 304 budget resolution with instructions to raise the debt limit, or is discharged from consideration of such resolution, the Senate proceed to its immediate consideration.

Senator Chuck Schumer: (08:07)
Reserving the right. The Republican leader has offered virtually nothing. He keeps the same risky process in place. He is totally doing 180 degree turn from what he has offered time and time again. Democrats vote, yes, without any Republican help, but he refuses to do that. He refuses to do that. Our proposal is fair. Our proposal is not risky the way the Republican leader’s is and his doesn’t change a darn thing and so therefore, I object.