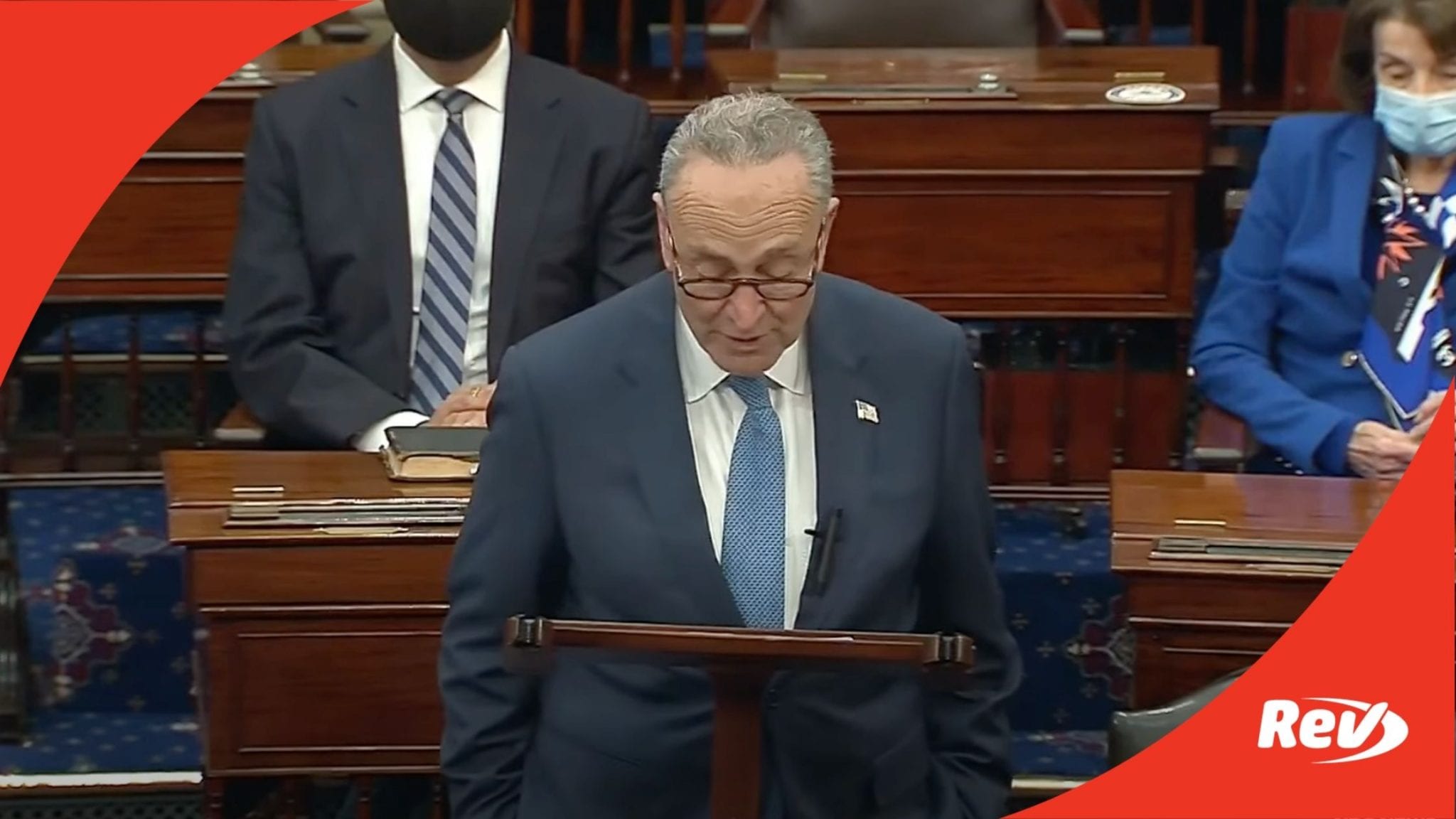 Chuck Schumer: (00:07)
Mr. President, I need to catch my breath so much is happening. A few hours ago on the west front of this citadel of democracy, Joe Biden and Kamala Harris were administered the oaths of office to the presidency and the vice presidency of the United States. We have turned the page to a new chapter in the history of our democracy, and I am full of hope. I would challenge anyone not to feel hopeful today after listening to Amanda Gorman, the amazing 22 year old poet, wise far beyond her years, who told us that quote, “Somehow we’ve weathered and witnessed a nation that isn’t broken, but simply unfinished.” The hope she spoke about, strong and happy hope, the hope we feel today is a hope, of course, that’s tempered by reality. This was an inauguration unlike most others. The crowds that customarily line the National Mall were absent, a reminder that our nation is still in the throes of a deadly pandemic.

Chuck Schumer: (01:16)
The presence of thousands of national guardsmen, police, and secret service was a reminder that two weeks ago in this very room and on those very steps where president Biden took the oath, a mob of violent criminals tried to dismantle our democracy, our sacred democracy, brick by brick, and would try again if they could. But as president Biden said a few hours ago, “Today, democracy has prevailed. The will of the people was heeded. The peaceful transfer of power fulfilled. It takes a lot more than a band of hooligans to bring our grand democracy down. Let it be a message to our friends and adversaries around the world. That our democracy, though it has been tried and been tested, shall long endure. And let it be a message to those terrorists who desecrated this temple of democracy that they will never prevail.” Joe Biden is now the 46th president of the United States.

Chuck Schumer: (02:21)
Kamala Harris is now the 49th vice president of the United States. But of course, in more ways than one, she is not the 49th, but the first. The first African American woman, the first Asian American woman, the first woman, period, to hold the office of vice presidency in our nation’s history. Today, the threat to our democracy from the presidency itself has ended. But the challenges we face as a nation remain. In the wake of violence and division, hatred and mis-truth, in the shadow of disease and economic hardship, a warming planet, an unequal society, we begin the work of the 117th Congress. In his inaugural address, President Biden spoke to this moment, a moment of great challenge and told us two simple truths. One, that our responsibilities are numerous. And two, it will take unity, unity of spirit, unity of purpose to fulfill them.

Chuck Schumer: (03:28)
President Biden, we heard you loud and clear. We have a lengthy agenda, and we need to get it done together. President Biden pointed the way to our nation’s recovery and renewal. He reminded us of who we are and where we need to go. But we must now turn the spirit of his words into action. The Senate must immediately set to work on the mission President Biden described, restoring the greatness and goodness of America. This will be an exceptionally busy and consequential period for the United States Senate. There is much to do, and we are ready to get to work. Now, not to upstage our new president and vice president, but theirs has not been the only swearing in today. A few moments ago, the Senate welcome three new members to this chamber. I can now happily and proudly call them, Senator Padilla, Senator Ossoff, Senator Warnock.

Chuck Schumer: (04:42)
They joined Senators Kelly, Hickenlooper, and Lujan as part of a six member class of democratic senators and a new democratic Senate majority. I mentioned the historic nature of Vice President Harris’ ascendance, but let’s not forget that her successor, Alex Padilla, is the first Latino Senator to represent California. That Raphael Warnock, born while Georgia was represented in this chamber by two staunch segregationists, is now the first African-American Senator Georgia has ever elected. And that Jon Ossoff is the first Jewish Senator from his state, sworn in today on a book of Hebrew scripture, once owned by the rabbi who decades ago formed a bond between the Jewish and African-American communities of Georgia. As President Biden said in his inaugural address, “Don’t tell me things can’t change.” With the swearing in of these three senators, the Senate will turn to democratic control, for which I deeply thank my colleagues.

Chuck Schumer: (05:57)
We’ll turn to Democratic control under the first New York born majority leader in American history. A kid from Brooklyn, the son of an exterminator and a housewife, the descendant of victims of the Holocaust. That I should be the leader of this new Senate majority is an awesome responsibility. Awesome in the Biblical sense, as the angels that trembled in awe before God. Today, I feel the full weight of that responsibility. A sense of reverence, of awe at the trust placed in me. I intend to honor that trust with all of my energy and with joy. And as the majority changes in the Senate, the Senate will do business differently. The Senate will address the challenges our country faces head on and without delay. Not with timid solutions, but with boldness and with courage.

Chuck Schumer: (07:02)
The Senate will tackle the perils of the moment, a once in a generation health and economic crisis. And it will strive to make progress on generations-long struggle for racial justice, economic justice, equality of opportunity, and equality under the law. And make no mistake, the Senate will forcefully, consistently, and urgently address the greatest threat to this country and to our planet, climate change. This Senate will legislate. It will be active, responsive, energetic, and bold. And to my Republican colleagues, when and where we can, the Democratic majority will strive to make this important work bipartisan. The Senate works best when we work together. We have no choice. The challenges we face are great. The divisions in the country are real. We have no choice, but to try to work together every day to reward the faith the American people have placed in us. So let us begin. I yield the floor.