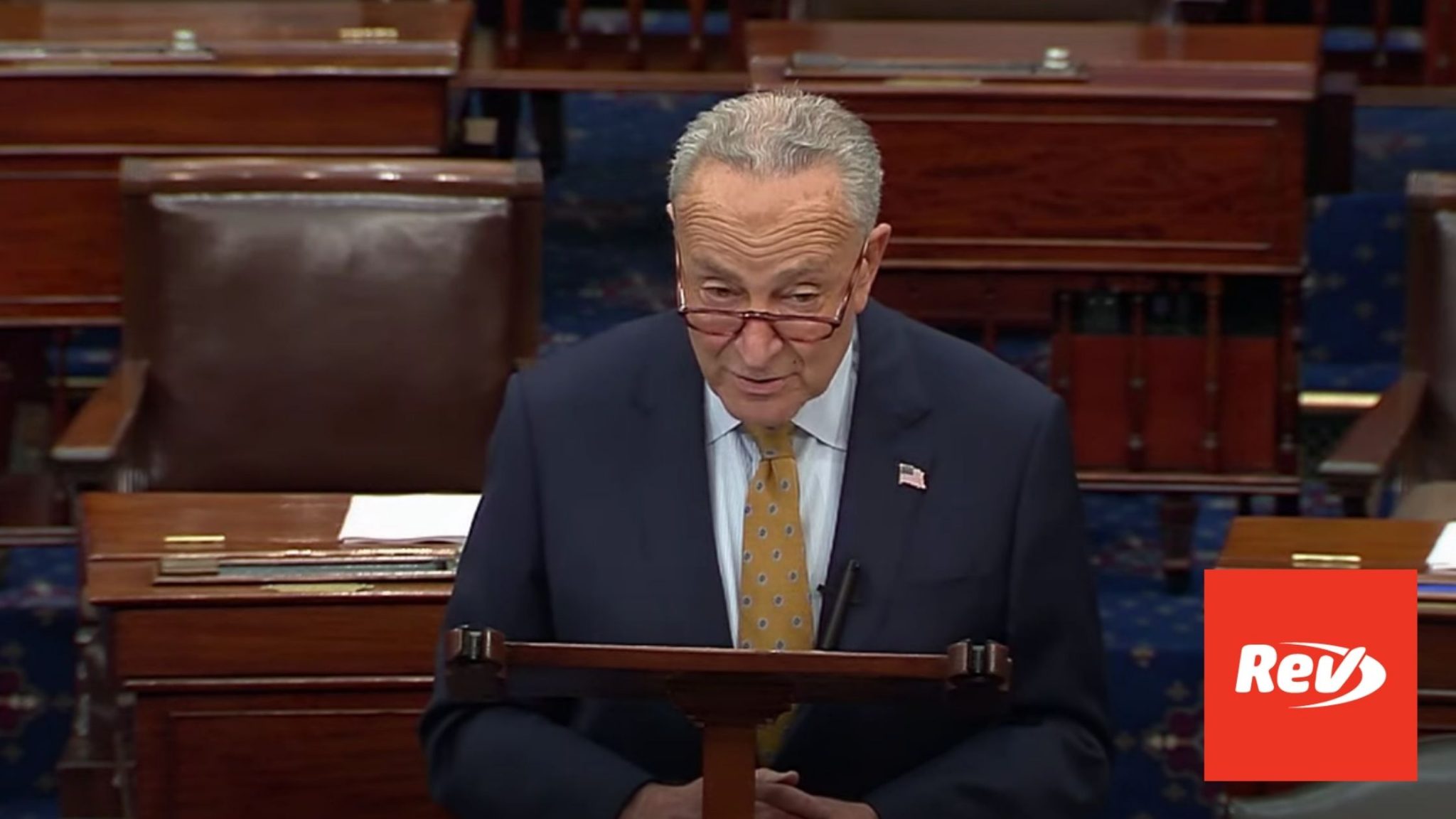 Senate Majority Leader Chuck Schumer gave remarks on raising the U.S. debt ceiling before the Senate vote on September 27, 2021. Read the transcript of the speech here.

Chuck Schumer: (00:09)
Madam President, after today, there’ll be no doubt which party in this chamber is working to solve the problems that face our country and which party is accelerating us towards an unnecessary avoidable disaster.

Chuck Schumer: (00:28)
Let me say that again without interruption. Madam President, after today, there will be no doubt, no doubt about which party in this chamber is working to solve the problems that face our country and which party is accelerating us towards unnecessary avoidable disaster. At the end of last week, I filed cloture on proceeding to the continuing resolution sent to us by the House of Representatives, which among other things would prevent a government shutdown and suspend the debt limit, so we can pay for our debts incurred during the previous administration. In a few hours, we will vote on cloture on the motion to proceed to this bill. The Democrats will do the responsible thing, the right thing, the thing that’s been done for decades by both parties and vote yes. Now, if Republicans follow through with their plans to vote no, they will be on record deliberately sabotaging our country’s ability to pay the bills and likely causing the first ever default in American history.

Chuck Schumer: (01:32)
The consequences of a default would be in the words of Secretary Yellin, “Catastrophic.” The best case scenario is… The best case under this awful situation is that our country would fall into another recession, potentially erasing all the progress we have made to pull out ourselves out of the COVID crisis. That is if we’re lucky. Otherwise one analysis warned that default could hurt Americans for generations, for generations. Interest costs will be higher and not go down very quickly. And that has huge effects on so many different people. And that’s only one of the effects of default. So I want my Republican colleagues to think carefully about the practical consequences of what they’re doing. The default means quite simply, the government cannot pay it’s bills. It means that suddenly the government is presented with unimaginable options. Do they tell seniors they won’t get their social security checks or veterans that they won’t see their benefits or tell our military they won’t be getting paid?

Chuck Schumer: (02:41)
And the consequences on Main Street would be equally severe. A default would very likely send markets crashing and interest rates skyrocketing, making it harder for small businesses to make ends meet, for homeowners and renters to pay the bills, and for consumers to keep our economy going. All of the consequences or so many of the consequences can be boiled down into three frightening numbers, 6,000,000, 9, 15 trillion. 6 million jobs lost, 9% unemployment, 15 trillion in squandered household wealth. Let me say that again. Those are devastating numbers on so many households throughout America, just about every household. That’s 6 million jobs lost, 9% unemployment, 15 trillion in squandered household wealth.

Chuck Schumer: (03:36)
Yes, that’s what we’re potentially looking at if Republicans get their irresponsible and reckless way. None of this needs to happen. None of it. The only reason we are here, the only reason this is even a possibility is because Republicans are making this a possibility by preventing the government from paying its bills. It’s an unhinged position to the take, one that not long ago, only the most radical elements of the Republican party would’ve embraced. There’s no scenario in God’s green earth, where it should be worth risking millions of jobs, trillions in household wealth, people’s social security checks, veterans benefits, and another recession just to score are short term meaningless political points. That’s what Republicans seem fixated on doing.

Chuck Schumer: (04:26)
Now, there’s a very simple step we can take today to guarantee the government won’t default and won’t shut down. Both sides can come together to vote yes on today’s vote and vote to pass the continuing resolution. Just as Democrats worked in a bipartisan fashion under the Trump Administration, Republicans must now step up to the plate. To do otherwise is the height of recklessness, irresponsibility. Republicans say they don’t want to see a government shutdown. They say they don’t want to see our government default on our debt.

Chuck Schumer: (05:00)
Then they should vote yes. It’s plain and simple. It’s very clear. There’s no obfuscation here. Crystal clear. Voting yes means avoiding default and avoiding a government shutdown. Voting no says let’s risk it. Let’s risk it. By choosing to block today’s resolution, Republicans are intentionally making default more likely. By blocking an extension of the debt limit, Republicans will solidify themselves for a long time as the party of default. I cannot emphasize that this isn’t just another political gain. We’re facing a parade of horribles that will hurt every single American in this country. And it’s important to remember that today’s vote would also advance a number of priorities besides just funding the government and avoiding default, as important as those are. It would provide desperately needed emergency funding for millions of people affected by natural disasters from this summer, including hurricanes, wildfires, and flooding across Tennessee, Kentucky, and Virginia.

Chuck Schumer: (06:03)
It would provide billions to help resettle Afghan refugees who risk their lives, helping our troops abroad. Both sides claim they support these priorities. So the easy answer is to vote yes later today. Madam President, being elected to office means sometimes you have to do things to rise above partisan politics. It means we have an obligation to work together when our country faces an acute crisis. Tearing the barn down is easy. Building it up, preserving it, keeping it standing year after year takes hard work and cooperation. And at the end of the day, the only thing that matters in this chamber is how its members vote. Rest assured Democrats will vote today to do the right thing. The American people will be watching whether or not our Republican colleagues choose to vote in favor of preserving our full faith and credit or vote in favor of an unprecedented default. I yield the floor. Note the app.