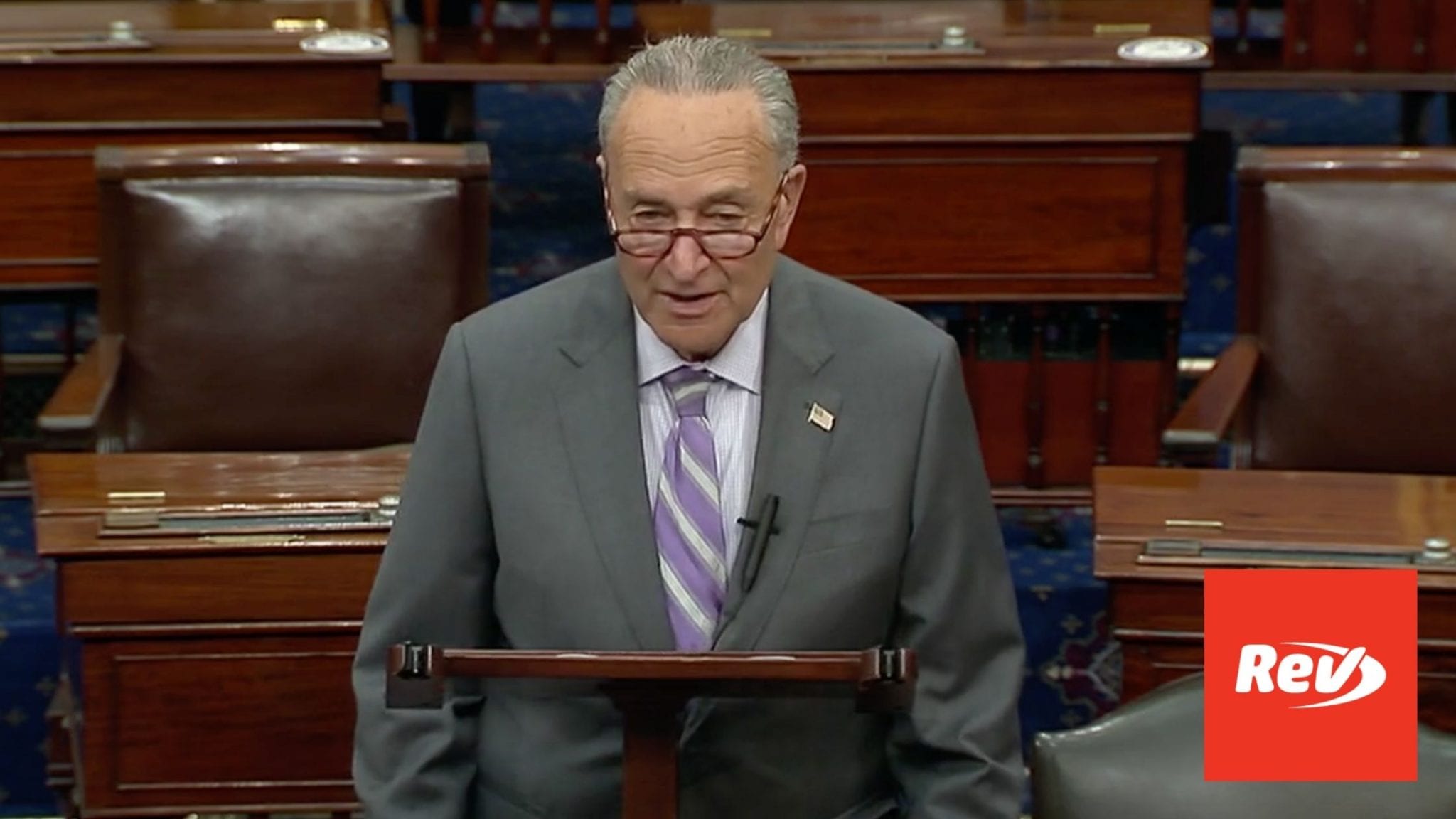 Senator Chuck Schumer spoke on the Senate floor on September 9 to discuss the proposed GOP coronavirus relief bill. He called the bill “emaciated.” Read the transcript of his remarks here.

Chuck Schumer: (00:59)
So after taking a pause on COVID relief for four months, finally, finally, finally, Senate Republicans are realizing the damage that their delay has done to our economy and the nation’s health. Yesterday, Leader McConnell announced by the end of the week, the Senate would vote on a new slimmed down version of an already skinny Republican bill. We know what happened here. The leader did nothing for months, but the American people are demanding action. Republican governors, local officials, hospitals, small businesses, everyone is demanding action. Restaurants, performance stages, and places are demanding action, not just of Democrats, but of both sides of the aisle. So the leader had to do something.

Chuck Schumer: (01:50)
At first, he tried to cobble together a legislative response, but it failed spectacularly. Leader McConnell was unable to bring it even forward for a vote. That’s happened a couple of weeks ago. So now, because he can’t get the votes because, by his own admission, 20 of his own members want no money voted in this crisis … How many Americans think there should be no money at the height of the greatest economic crisis we’ve had since the Depression, the height of the greatest health crisis we’ve had since the Spanish pandemic flu? How many Americans think that federal government should do nothing? But a large chunk of the Republican caucus evidently seems to, by the Republican leader’s own admission.

Chuck Schumer: (02:35)
So he couldn’t even get this trillion dollar bill passed. It was pathetic. So now Republicans are going to cut their original inadequate $1 trillion bill in half in a desperate attempt to find the lowest common denominator among Republicans. As the pain, the economic pain for millions of Americans advance, Senate Republicans are actually moving backward. Of course, up until now, the issue in our negotiations with the White House where Leader McConnell has been absent, has been about the size and scope of the next relief bill. Democrats passed a $3 trillion bill through the House over two months ago. Why? That’s the need of America during this great crisis. We didn’t come up with just any numbers. We studied it carefully. We talked to school administrators. What do you need? We talked to hospital administrators. What do you need? We talked to restaurants. We talked to performance places. What do you need? And we came up with a carefully thought out bill that met the need.

Chuck Schumer: (03:56)
Our Republican friends didn’t meet the need. They came out with what they call a skinny bill at $1 trillion. And we all know why. The right wing ideology that has so gripped so much of the Republican party doesn’t want to spend any money. We at least, in an offer to compromise, offered to meet our Republican friends in the middle. They balked. No, no, no. They didn’t want to compromise. Their way or no way. And now, instead of improving their offer, Senate Republicans have made it even stingier and even less appropriate for the looming crises that we have. I’m not sure what kind of negotiating strategy that is, but it sure isn’t a serious strategy and it sure won’t be successful. That’s why I called it cynical yesterday.

Chuck Schumer: (04:48)
COVID-19 has changed nearly every aspect of American life. The needs in our country are so great. The pain felt by average Americans is severe. And yet the new Republican proposal doesn’t include food assistance for people who can’t feed their kids, rental assistance for people who will be kicked out of their homes, aid to state and local governments, desperate not to lay off bus drivers and sanitation workers and firefighters. In their new bill, Republicans won’t even let the states use existing funds to cover lost revenues. It leaves out important worker protections. It leaves out hazard pay. It leaves out broadband so desperately needed in rural areas. It leaves out funding for safe elections and help for the census. It shortchanges our healthcare system and education system.

Chuck Schumer: (05:42)
As school years began across the country, the new emaciated Republican bill basically makes funding for schools contingent upon reopening. So if you’re a school struggling with the cost of operating remotely, if you’re a school that would like to reopen safely but need help instituting new standards and protections, the GOP bill says, “Tough luck.” Donald Trump comes up with this idea, “All schools must open.” And our Republican colleagues in obeisance come up with a proposal that says to the millions of kids who will go to school remotely or in hybrid situations, “We’re going to make it much harder for you to get help.”

Chuck Schumer: (06:24)
That is to say nothing about the fact that the new Republican COVID bill is laden with poison pills designed to make its passage impossible. Someone looking at this would say, “Why would they, if they want to come to a compromise, why would they put poison pills in the bill that they know are non-starters to getting a bipartisan compromise? Is it because they really don’t want a bill, but a political issue?” One that will ultimately backfire on them I believe. Well, but they’ve done it. There is broad corporate immunity that my colleague in Illinois has so focused on, an immunity provision that would protect corporations who put their workers in harm’s way from legal liability. And evidently to get a handful of hard right senators who didn’t want to spend any money, they added a partisan school choice program long sought by Secretary DeVos, hardly a friend of public education.

Chuck Schumer: (07:20)
Republicans called their new bill targeted. But by almost every measure, it misses the mark. It is impossible to look at the new GOP proposal as a serious effort to passing a law. It is impossible to look at this GOP proposal and not wonder do our Republican friends see the damage in America? Are they still intent on playing these same games? Are they still trying to fool the American people by calling a harshly partisan proposal bipartisan as the leader just did?

Chuck Schumer: (07:59)
If Republicans were serious about achieving a result, they would have joined negotiations with Speaker Pelosi, me, and the White House. If Leader McConnell was so eager to get something done, why wasn’t he at the table for weeks? Republicans could have encouraged the White House to improve their offer, to meet us in the middle, to break the log jam. Where were the Republican senators? I haven’t heard a voice speak out and say, “We should meet in the middle.” They’re all so afraid of what Donald Trump might say I suppose.

Chuck Schumer: (08:39)
Leader McConnell instead crafted a partisan bill, no input from Democrats, even leaner and meaner than the previous Republican proposal, and will rush it to the floor two days after releasing it. This is one of the most cynical moves by any leader I’ve ever seen. This isn’t about making law or working in good faith with the other party. Leader McConnell isn’t searching for bipartisan progress. He seems to be looking for political cover. It won’t pass on Thursday and we’ll be right back where we are today, needing our Republican colleagues to understand the gravity of the situation in our country and work with us in a bill that actually makes some sense and deals with the magnitude of this awful crisis.

Chuck Schumer: (09:31)
Now a final matter, the new Republican bill is silent on a whole host of crucial issues, including a number of items that affect small businesses. Over the state work period, I visited several independent music and theater venues that have struggled during the COVID-19 pandemic. Live venues were some of the first to close and they’ll be the last to open up. Many of them are already on the brink of collapse. There’s the rent, the utilities, an entire year without revenue. Live venues, by definition, people are close together. So they couldn’t continue during COVID and they have to wait till the very end. But they are so important to so many communities, urban, suburban, and rural.

Chuck Schumer: (10:28)
And unfortunately, according to one survey, 90% of independent venues will have to close permanently without federal funding. What an incredible shame that would be. These are indie music venues, jazz clubs, symphony orchestra halls, comedy clubs, even Broadway, which is made up of dozens of small theaters that employ thousands of workers from the box office to the backstage. These independent venues provide 75% of all artist’s income. And they drive economic activity within our communities at restaurants, hotels, stores, and other establishments.

Chuck Schumer: (11:07)
But what we risk if these venues closed permanently isn’t purely economic, although it is so important. I was in Albany and Syracuse yesterday. It’s estimated that the arts are one of the top five employers in both of those cities. We can’t afford to let this happen. Economically, we will lose thousands and thousands of jobs. Cities will lose, city downtowns and rural areas as well will lose their vitality. And the risks if these venues close permanent is not just economic. They are the very fabric of our society, which has been stretched to the breaking point by this crisis. Once this is all over, we will need these venues and the passionate, inspiring, artistic work that they help make possible as we come together again and try to make sense of this incredible difficult moment in our history.

Chuck Schumer: (12:07)
So we have a bipartisan bill, the Save Our Stages Act, that will create a new $10 billion SBA program to provide federal grants to live venue operators. So when God willing these live stages can reopen safely, these venues can come back bigger and better than ever. Those grants would go for six months, giving the venues enough time and breathing room to recuperate and God willing, if there’s a vaccine within six months, they will be able, God willing, to open again.

Chuck Schumer: (12:41)
One of the most difficult parts of this pandemic has been the effect on American society, arts and culture. These are the things we live for. Sports, comedy, theater, music. And when the day finally comes when the pandemic is behind us, we will want to celebrate once again with friends and families at these venues now in danger of closing. So I hope that we can come together in the future to pass the Save Our Stages Act and save this essential part of American culture.