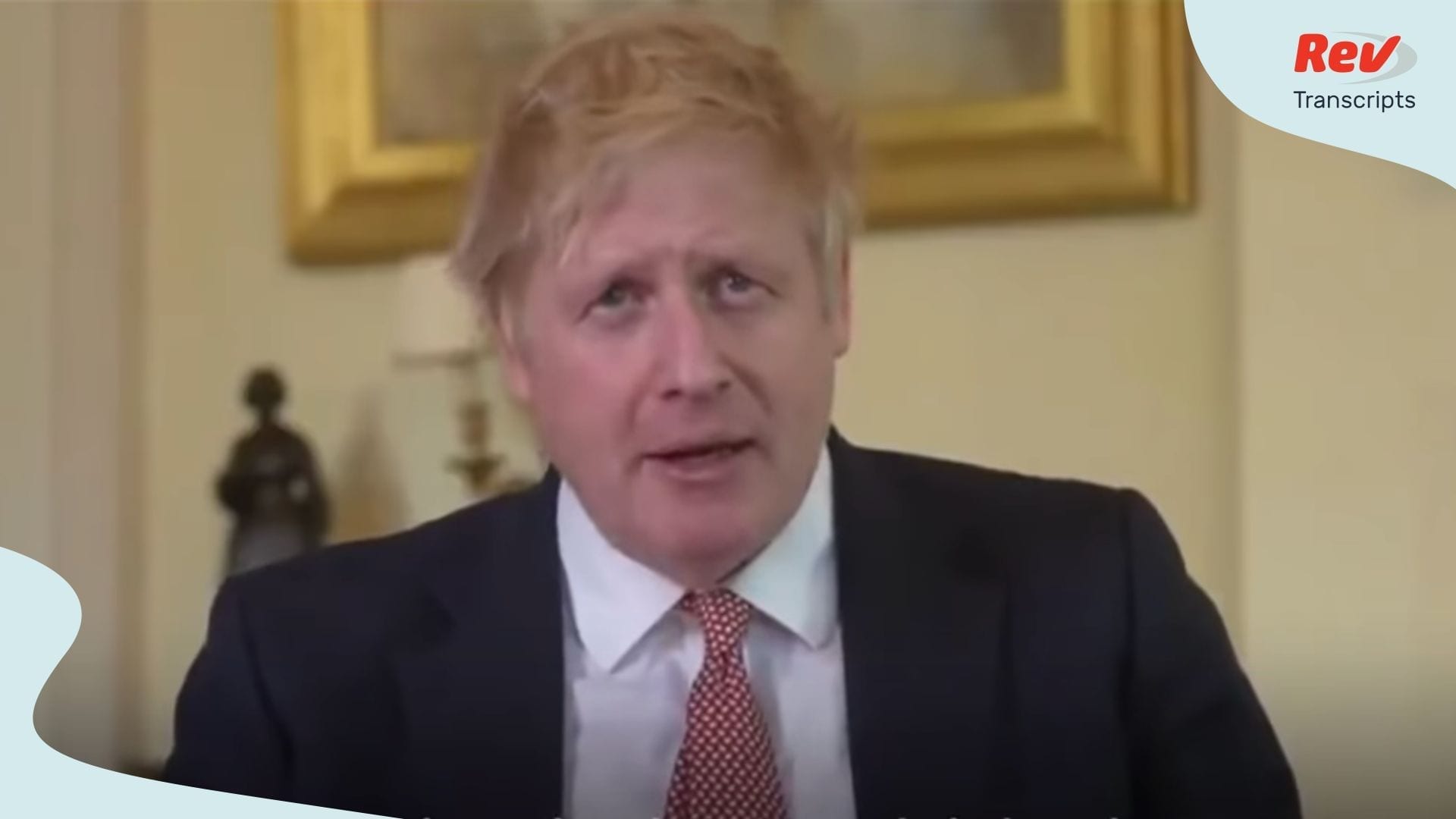 British Prime Minister Boris Johnson released an Easter announcement online after being released from the hospital, recovering from COVID-19. Read the full transcript of his speech.

Boris Johnson: (00:00)
Good afternoon. I have today left hospital after a week in which the NHS has saved my life. No question. It’s hard to find words to express my debt, but before I come to that, I want to thank everyone in the entire UK for the effort and the sacrifice you have made, and are making. When the sun is out and the kids are at home, when the whole natural world seems that its loveliest and the outdoors is so inviting, I can only imagine how tough it has been to follow the rules on social distancing.

Boris Johnson: (00:40)
I thank you because so many millions and millions of people across this country have been doing the right thing. Millions going through the hardship of self isolation faithfully, patiently, and with thought and care others as well as for themselves. I want you to know that this Easter Sunday, I do believe that your efforts are worth it and are daily proving their worth. Because although we mourn every day, those who are taken from us in such numbers and though the struggle is by no means over, we are not making progress in this incredible national battle against coronavirus.

Boris Johnson: (01:25)
A fight we never picked against an enemy we still don’t entirely understand. We’re making progress in this national battle because the British public formed a human shield around this country’s greatest national asset, our National Health Service. We understood and we decided that if together we could keep our NHS safe, if we could stop our NHS from being overwhelmed, then we could not be beaten, and this country would rise together and overcome this challenge as we have overcome so many challenges in the past.

Boris Johnson: (02:07)
In the last seven days, I have of course seen the pressure that the NHS is under. I’ve seen the personal courage, not just of the doctors and nurses, but of everyone, the cleaners, the cooks, the healthcare workers of every description. Physios, radiographers, pharmacists who kept coming to work, kept putting themselves in harm’s way, kept risking this deadly virus.

Boris Johnson: (02:35)
It is thanks to that courage, that devotion, that duty and that love that our NHS has been unbeatable. I want to pay my own thanks to the utterly brilliant doctors, leaders in their fields, men and women, but several of them for some reason called Nick, who took some crucial decisions a few days ago, which I will be grateful for the rest of my life. I want to thank the many nurses, men and women whose care has been so astonishing. I’m going to forget some names, so please forgive me, but I want to thank Po Ling and Shannon and Emily and Angel and Connie and Becky and Rachel and Nikki and Anne. And I hope they won’t mind if I mention in particular two nurses who stood by my bedside for 48 hours when things could have gone either way. They’re Jenny from Zealand Invercargill on the South Island to be exact, and Luis from Portugal near Porto.

Boris Johnson: (03:45)
And the reason in the end my body did start to get enough oxygen was because for every second of the night they were watching, and they were thinking and they were caring and making the interventions I needed. So that is how I also know that across this country, 24 hours a day, for every second of every hour, there are hundreds of thousands of NHS staff who are acting with the same care and thought and precision as Jenny and Luis.

Boris Johnson: (04:50)
So thank you from me, from all of us to the NHS. Let’s remember to follow the rules on social distancing. Stay at home, protect our NHS and save lives. Thank you and happy Easter.

Speaker 2: (05:13)
Boris Johnson, the prime minister there in that video statement released on Twitter just a short time ago after his week in hospital in which he was in intensive care. Looking remarkably strong there and addressing the nation with those words. Thanking the NHS staff in particular who had stayed by his side, those two nurses who had kept him going with oxygen on that particular night where he felt it could have gone either way, and that they had, in his words, saved his life. No question about that.

Speaker 2: (05:45)
So, that was the latest from the prime minister. He’s now been released St. Thomas’s hospital in London. He is going to continue his convalescence checkers after being in Downing Street this afternoon.