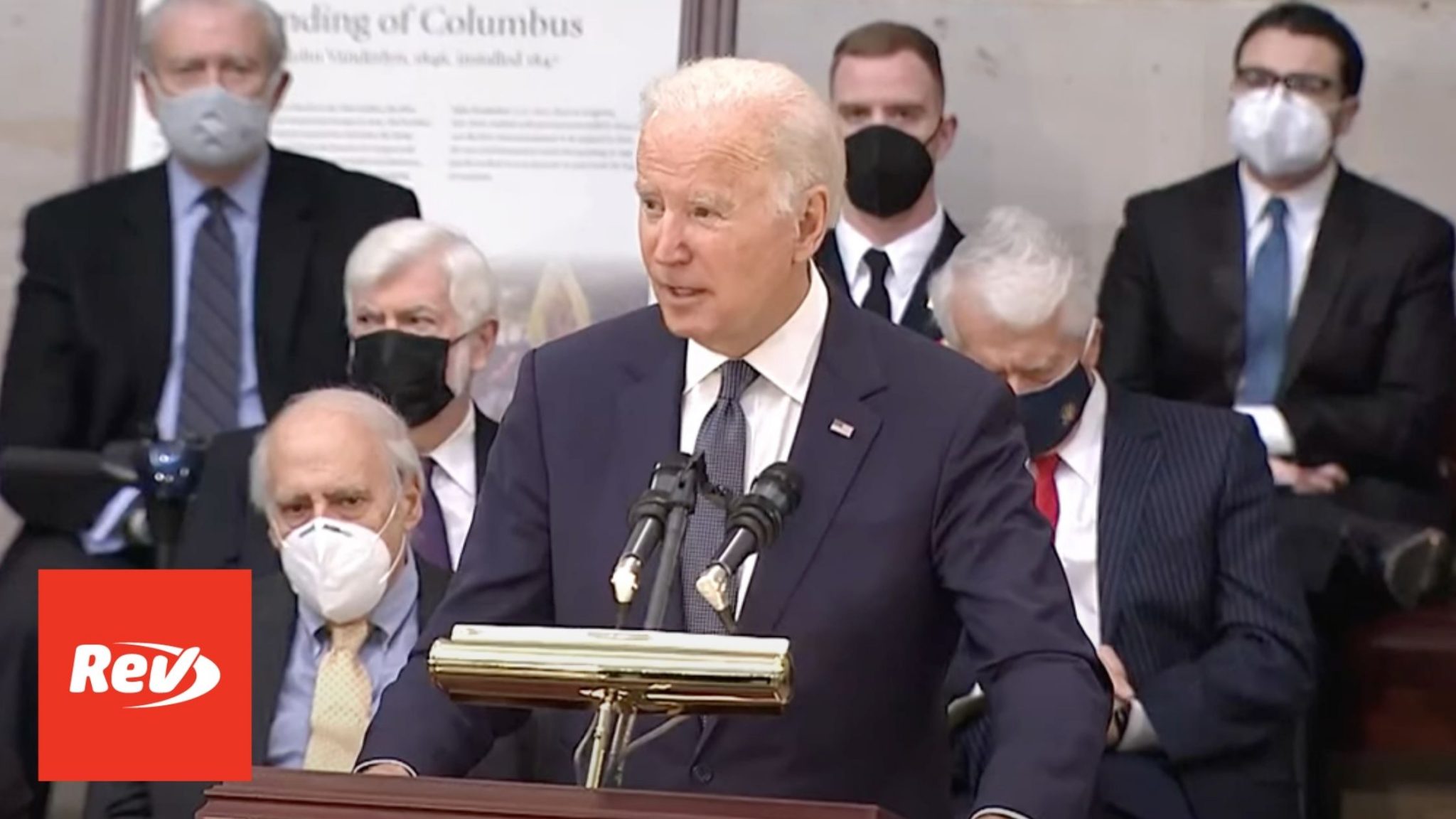 President Joe Biden honored Bob Dole with a memorial speech at the Capitol Rotunda on December 9, 2021. Read the transcript of the speech here.

President Joe Biden: (00:09)
Vice President Harris, Speaker Pelosi, Majority Leader Schumer, Minority Leader McConnell, members of Congress, distinguished guests, and most importantly Elizabeth and Robin, I know it’s not easy. Thank you for letting us do this. We meet here in the very heart of American democracy, the capitol of the United States of America, to receive a hero of that democracy for a final time. Robert Joseph Dole, he belongs here in this place, in this temple of liberty, to liberty and a temple to possibilities. Bob Dole loved this capitol. It’s where he served the nation shaped by the figures that surround us: Washington and Jefferson who set us on our path; Abraham Lincoln, another man from the heartland of the country from whence he came; Bob’s hero, Dwight David Eisenhower; Martin Luther King Jr who Bob helped pass legislation honoring the great civil rights leader with a federal holiday. Bob stood up and got that done. Gerald Ford who served here and with whom Bob sought the Vice President of the United States. In a sentence, Bob belongs here.

President Joe Biden: (02:07)
He too was a giant of our history and that’s not hyperbole. It’s real, of wit and grace, of principle and persistence, of courage and conviction. I had the great honor of serving with Bob as many of you around this casket have. I served with him for 25 years. He did have great wit. They once asked him why in God’s name did he vote to continue to fund Amtrak. He said because if he didn’t, Biden would stay overnight and cause more trouble. I commuted everyday. True story. He was the deciding vote. Well Bob and I, like many of us in here, we disagreed on a number of things, but not on any of the fundamental things. We still found a way to work together. We genuinely, we genuinely respected one another as colleagues and as fellow Americans. It was real. It wasn’t fake. We became great friends.

President Joe Biden: (03:21)
Because Bob deserves a final word, I’d like to read a portion of his final message that he left to the country that I hope we all listen to in the days and weeks and months to come. I quote Bob Dole. “I cannot pretend that I have not been a loyal champion of my party, but I’ve always served my country best when I did it so first and foremost as an American where we prioritize principles over party, humanity over personal legacy. When we do that, we accomplish far more as a nation. By leading with shared faith in each other, we become America at its best.” We went on to say, “A beacon of hope, a source of comfort in crisis, a shield against those who threaten freedom. Our nation has certainly faced periods of division, but at the end of the day, we’ve always found ways to come together. We can find that unity again.” The message said, “End of message.”

President Joe Biden: (04:54)
My fellow Americans, America has lost one of our greatest patriots. We may follow this wisdom, I hope, and his timeless truth that the truth of the matter is as divided as we are, the only way forward for democracy is unity, consensus, the only way. May we follow this wisdom and his timeless truth and reach consensus and the basic fundamental principles we all agree on. May God bless Bob Dole. May God bless America. May God protect our troops.