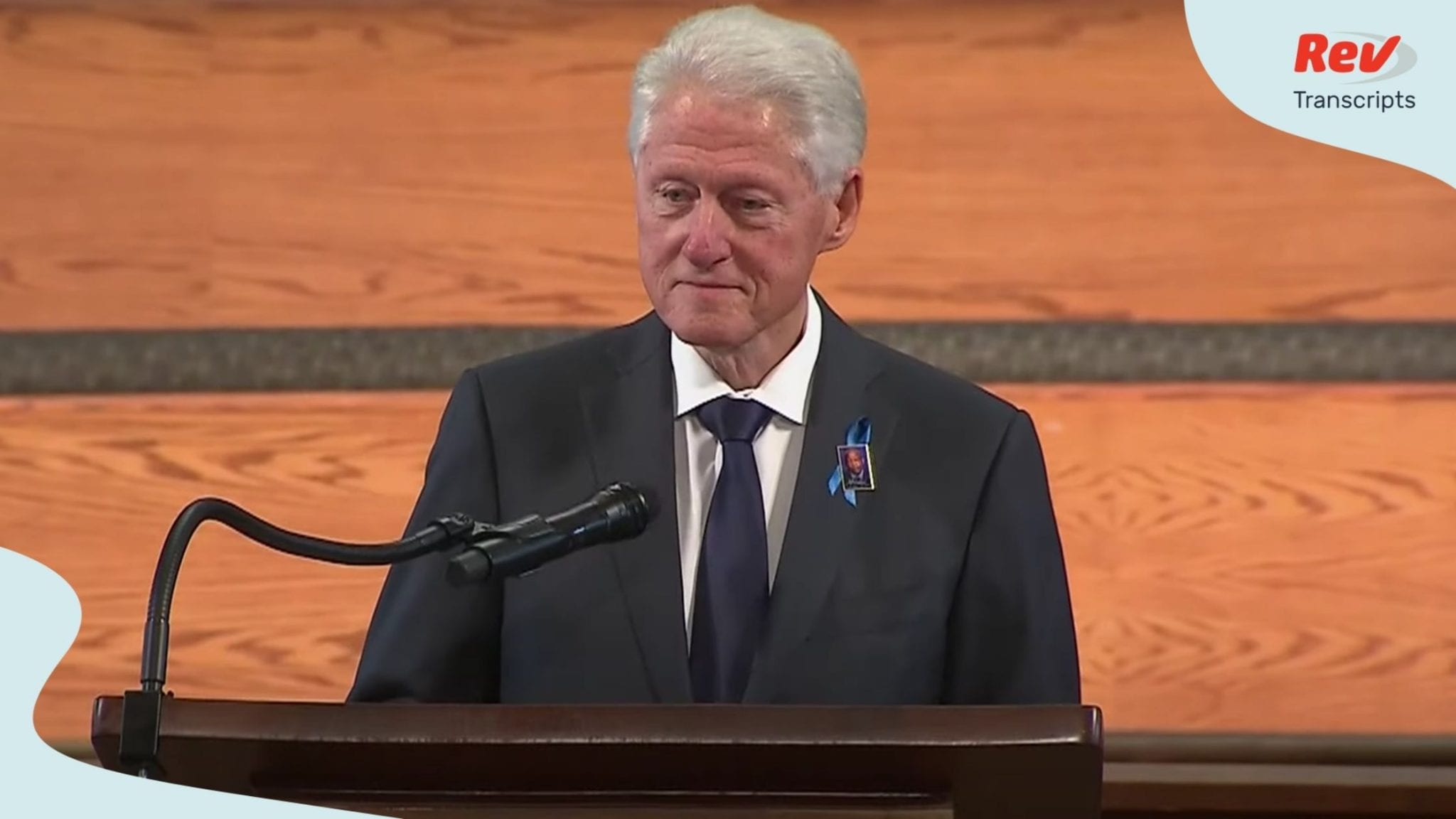 President Bill Clinton gave a eulogy at John Lewis’ funeral on July 30. He said: “He got into a lot of good trouble along the way, but let’s not forget, he also developed an absolutely uncanny ability to heal trouble waters”. Read the eulogy speech transcript here.

Bill Clinton: (00:03)
Thank you very much. First, I thank John-Miles and the Lewis family and John’s incomparable staff for chance to say a few words about a man I loved for a long time. I’m grateful Pastor Warnock, to say it in Ebeneezer, a holy place, sanctified by both the faith and the works of those who have worshiped here. I thank my friend, Reverend Bernice King, who stood by my side and gave a fascinating sermon in one of the most challenging periods of my life.

Bill Clinton: (00:58)
I thank President and Mrs. Bush, President Obama. Speaker Pelosi, thank you and representative Hoyer and Representative Clyburn, who I really thank for with the stroke of a hand ending an intrafamily fight within our part, proving that peace is needed by everyone. Madame Mayor, thank you. You have faced more than a fair share of challenges in these last few months and you have faced them with candor and dignity and honor and I thank you for your leadership.

Bill Clinton: (02:05)
I must say for a fella that got a start speaking to chickens, John’s gotten a pretty finely organized and orchestrated and deeply deserved send-off this last week. His homegoing has been something to behold. I think it’s important that all of us who loved him, remember that he was, after all, a human being, a man like all other humans, born with strengths, that he made the most of when many don’t, born with weaknesses that he worked hard to beat down when can’t, but still a person. It made them more interesting and it made him, in my mind, even greater.

Bill Clinton: (03:11)
Twenty years ago, we celebrated the 35th anniversary of the Selma March and we walked together along with Coretta and many others from the movement who are no longer with us. We are grateful for Annie Young and Reverend Jackson and Diane Nash, and many others who survive. But on that day, I got him to replay for me a story he told me when we first met back in the 1970s. I said, “I was just an aspiring whatever Southern politician and hadn’t been elected governor and he was already a legend.”

Bill Clinton: (04:14)
So John, what’s the closest you ever actually came to getting killed doing that. And he said, “Well, once we were at a demonstration and I got knocked down on the ground and people were getting beat up pretty bad and all of a sudden I looked up and there was a man holding a long, heavy piece of pipe and he lifted it and was clearly going to bring it right down into my skull. At the very last second I turned my neck away and then the crowd pushed him a little bit. A couple of seconds later, I couldn’t believe I was still alive.” I think it’s important to remember that. First, because he was a quick thinker. And secondly, because he was here on a mission that was bigger than personal ambition. Things like that sometimes just happen but usually they don’t.

Bill Clinton: (05:22)
I think three things happened to John Lewis long before we met and became friends that made him who he was. First, the famous story of John at four with his cousins and siblings holding his aunt’s hand more than a dozen of them, running around a little old wooden house, as the wind threatened to blow the house off its moorings, going to the place where the house was rising and all those tiny bodies trying to weigh it down. I think he learned something about the power of working together. Something that was more powerful than any instruction.

Bill Clinton: (06:10)
Second, nearly 20 years later when he was 23, the youngest speaker and the last speaker at the March on Washington, when he gave a great speech urging people to take to the streets across the South, to seize the chance to finally end racism. He listened to people that he knew, had the same goal say, “Well, we have to be careful how we say this because we’re trying to get converts, not more adversary.” Just three years later, he lost the leadership of SNCC to Stokely Carmichael because he said, “You know, I’d really…” I think it was a pretty good job for a guy that young and to come from Troy, Alabama, it must have been painful to lose, but he showed as a young man there are some things that you cannot do to hang on to a position, because if you do them, you won’t be who you are anymore. I say there were two or three years there, where the movement went a little bit too far towards Stokely, but in the end, John Lewis prevailed. We are here today because he had the kind of character he showed when he lost an election.

Bill Clinton: (07:53)
Then there was Bloody Sunday. He figured he might get arrested and this is really important not to, for all the rhapsodic things we all believe about John Lewis, he had a really good mind and he was always trying to figure out how can I make the most of every single moment? So he’s getting ready to march from Selma to Montgomery. Wants to get across the bridge. What do we remember? He made kind of quite a strange figure. He had a trench coat and a backpack. Now young people would probably think that’s no big deal, but there weren’t that many backpacks back then and you never saw anybody in a trench coat looking halfway dressed up with a backpack. But John put an apple, an orange, a toothbrush, toothpaste in the backpack take care of his body because he figured he would get arrested. And two books, one a book by Richard Hofstadter on America’s political tradition to feed his mind. And one, the autobiography of Thomas Merton, a Roman Catholic Trappist monk, who was the son of itinerant artists making an astonishing personal transformation.

Bill Clinton: (09:46)
What’s a young guy who’s about to get his brains beat out and planning on going to prison and doing, taking that? I think he figured that if Thomas Merton could find his way and keep his faith and believe in the future, he John Lewis could too.

Bill Clinton: (10:11)
So we honor our friend for his faith and for living his faith, which the scripture says is the substance of things hoped for, the evidence of things unseen. John Lewis was a walking rebuke to people who thought, “Well, we ain’t there yet and we’ve been working a long time. Isn’t it time to bag it?” He kept moving. He hoped for and imagined and lived and worked and moved for his beloved community. He took a savage beating on more than one day and he lost that backpack on Bloody Sunday. Nobody really knows what happened to it. Maybe someday someone will be stricken with conscience and give some of it back. But what it represented, never disappeared from John Lewis’ spirit.

Bill Clinton: (11:24)
We honor that memory today because as a child, he learned to walk with the wind, to march with others to save a tiny house. Because of the young man, he challenged others to join him with love and dignity, to hold America’s house down and open the doors of America to all its people. We honor him because in Selma on the third attempt, John and his comrades showed that sometimes you have to walk into the wind along with it, as he crossed the bridge and marched into Montgomery. But no matter what, John always kept walking to reach the beloved community. He got into a lot of good trouble along the way, but let’s not forget, he also developed an absolutely uncanny ability to heal trouble waters. When he could have been angry and determined to cancel his adversaries, he tried to get converts instead.

Bill Clinton: (12:37)
He thought the open hand was better than the clenched fist. He lived by the faith and promise of Saint Paul. Let us not grow weary in doing good for in due season, we will reap if we do not lose heart. He never lost heart. He fought the good fight. He kept the faith but we got our last letter today on the pages of the New York Times; keep moving. It is so fitting on the day of his service. He leaves us our marching orders. Keep moving.

Bill Clinton: (13:28)
Twenty years ago when I came here after the Selma March to a big dinner honoring John and Lillian and John-Miles, you had a big Afro and it wasn’t really pretty and your daddy was giving you grief about it and I said, “John, let’s, don’t get old too soon. I mean, if I had hair like that, I’d have it down on my shoulders.”

Bill Clinton: (13:56)
But on that night, I was almost out of time and people were to be present and people were asking me, “Well, if you could do one more thing, what it would be, or what do you wish you had that you had done that you didn’t?” And all that kind of stuff. Someone asked me that night because I had many friends in Atlanta and I said, “If I could just do one thing. If God came to me tonight and said, ‘Okay, your time’s up. You got to go home and I’m not a genie. I’m not giving you three wishes.’ One thing, what would it be?”

Bill Clinton: (14:36)
I said, “I would infect every American was whatever it was that John Lewis got as a four year old kid and took through a lifetime to keep moving and keep moving in the right direction and keep bringing other people to move and to do it without hatred in his heart, with a song and be able to sing and dance.” As John’s brother Freddie said in Troy, keep moving to the ballot box even if it’s a mailbox and keep moving to the beloved community.

Bill Clinton: (15:28)
John Lewis was many things but he was a man. A friend and sunshine in the storm. A friend who would walk the stony roads that he asked you to walk. That would brave the chastening rods he asks you to be whipped by, always keeping his eyes on the prize, always believing none of us will be free until all of us are equal.

Bill Clinton: (15:59)
I just loved him. I always will and I’m so grateful that he stayed true to form. He’s gone up yonder and left us with marching orders. I suggest since he’s close enough to God to keep his eye on the sparrow and us, we salute, suit up and march on.